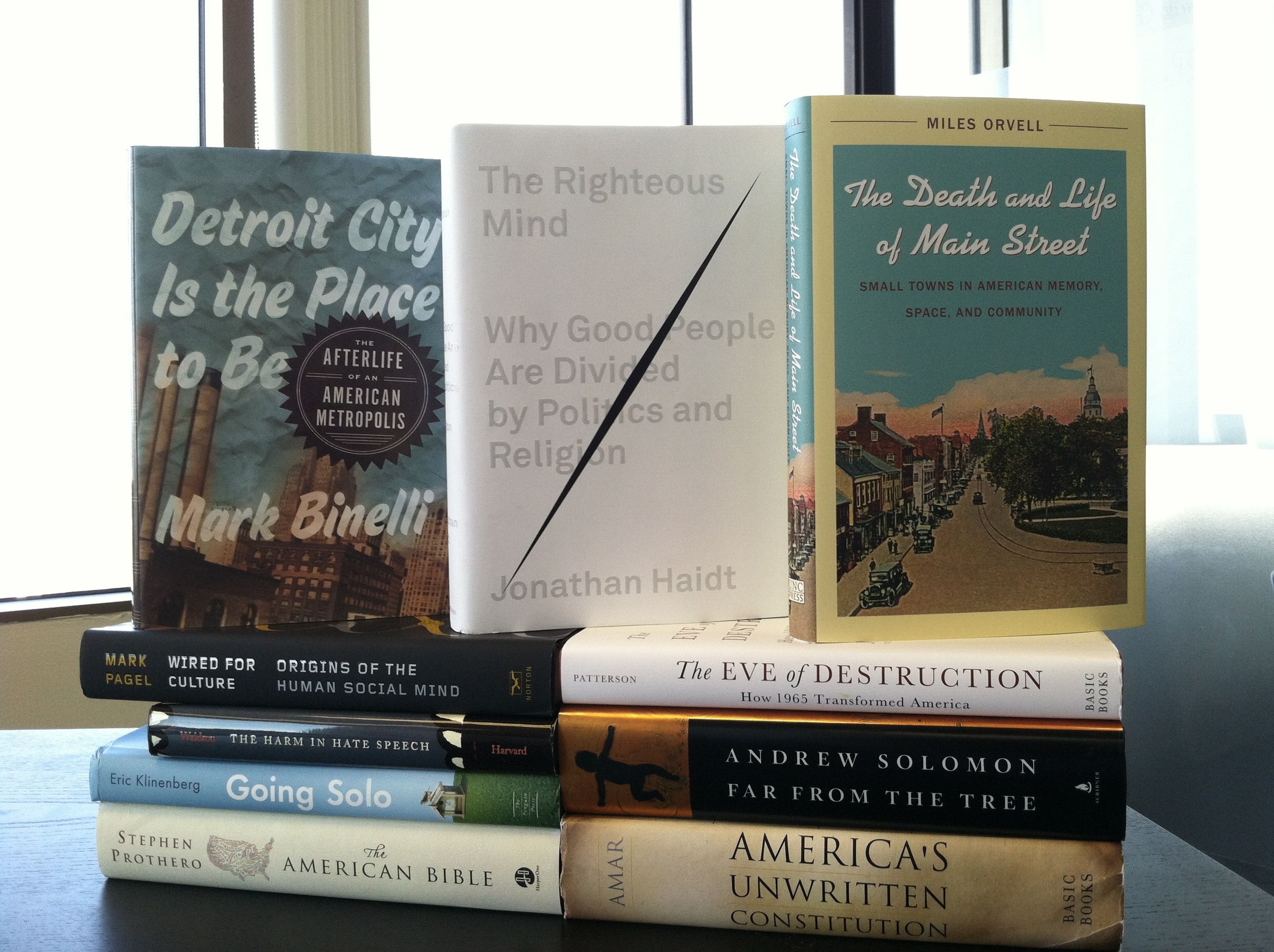 The Third Annual Zócalo Public Square Book Prize is made possible by the generous support of Southern California Gas Company.

President Barack Obama opened his inaugural address in January by reminding Americans “that what binds this nation together is not the colors of our skin or the tenets of our faith or the origins of our names.” He went on to quote from the Declaration of Independence. But at Zócalo Public Square, we believe that the ties that bind Americans—to one another and to their communities, local or national—are not simply 200-year-old ideals but also new and ever-changing habits, associations, and rituals.

That’s why we think it’s so important to bring people together, in person and online, to examine big questions. And that’s why, for the third year in a row, we are honoring the nonfiction book published in the past year that, in the view of our judges most enhances our understanding of human connectedness and social cohesion.

The books we considered for the Third Annual Zócalo Book Prize explored central topics such as how community is affected by technology and partisanship and seemingly off-beat subjects such as how social cohesion is encoded into our brain chemistry. Whatever their differences, the authors of these different books were in agreement—with one another and with Zócalo—on one thing: community matters.

Our winner, to be announced on Monday, March 25, will be one of the following three finalists, presented in alphabetical order by author:

Detroit City Is the Place to Be: The Afterlife of an American Metropolis by Mark Binelli

Detroit—and the images it evokes of urban apocalypse, racial strife, and post-industrial decline—has become a symbol of everything that was wrong with 20th-century America. But in the past few years, it’s also become a fashionable petri dish for experiments in urban renewal.

In order to chronicle the meeting of decay and innovation, hopelessness and dreams, Detroit-area native Mark Binelli, a contributing editor at Rolling Stone and Men’s Journal, returned to his hometown to explore “what happens to a once-great place after it has been used up and discarded.”

“To take a city like Detroit, and examine it with this kind of inventive care and attention in the way cities, and their residents, made history and were history and are now remaking history, seems like one of the highest necessities in America right now,” said one of our judges. Another judge concurred, noting that the book can be read as a “case study [that] prompts questions about the capacity of cities to permanently serve as social constructs and humans to adapt and modify them.”

The Righteous Mind: Why Good People Are Divided by Politics and Religion by Jonathan Haidt

Pundits call our contemporary political divides a product of our times and our culture, with modern technology exacerbating our disagreements. But we’re also wired to perceive our own views as right and reject the reasoning of others, particularly of those not from our own tribe.

If we can see and understand ourselves in this way, posits Jonathan Haidt, a moral psychologist at New York University’s Stern School of Business, we might just have a chance of bridging our deepest divisions. “We may spend most of our waking hours advancing our own interests,” he writes, “but we all have the capacity to transcend self-interest and become simply a part of a whole.”

The Righteous Mind is “food for thought for those of us who are in the business of trying to influence the way people see and feel the world in order to achieve more social cohesion,” wrote one of our judges. Another lauds the many applications of Haidt’s theories, which offer a “better understanding of our current deep political divides, the role of religion as a bonding and divisive force in society, and the advantage conservatism may have in modern elections.”

The Death and Life of Main Street: Small Towns in American Memory, Space, and Community by Miles Orvell

For most Americans, the phrase “Main Street” conjures up a specific place, even if it’s somewhere we’ve only visited in books and movies—a small town of white picket fences and independently owned shops, a community where everyone goes to the same church and greets one another by name.

But, writes Temple University professor of English and American studies Miles Orvell, this doesn’t mean that Main Street represents a single, unified American culture. Rather, it’s “an idea that has been subject to definition and redefinition, even contestation, for more than 100 years.”

One judge characterized The Death and Life of Main Street as “an evocative history of the American small town”; another credited Orvell with “inspiring me to battle with and examine … our sense of place and community.” Orvell’s book was also applauded for how it “skillfully deconstructs the myth” of American cohesion “without detracting from the importance that cohesiveness, and the idea of cohesiveness, holds for us.”

We are also pleased to announce our distinguished longlist. The authors of these excellent books—scientists, historians, religious scholars—explored community writ as large and long ago as the Old Testament, and as small and recently as today’s micro apartments.

Here is our complete longlist, in alphabetical order by author:

America’s Unwritten Constitution: The Precedents and Principles We Live By by Akhil Reed Amar
Detroit City Is the Place to Be: The Afterlife of an American Metropolis by Mark Binelli
The Righteous Mind: Why Good People Are Divided by Politics and Religion by Jonathan Haidt
Going Solo: The Extraordinary Rise and Surprising Appeal of Living Alone by Eric Klinenberg
The Death and Life of Main Street: Small Towns in American Memory, Space, and Community by Miles Orvell
The Eve of Destruction: How 1965 Transformed America by James T. Patterson
Wired for Culture: Origins of the Human Social Mind by Mark Pagel
The American Bible: How Our Words Unite, Divide, and Define a Nation by Stephen Prothero
Far From the Tree: Parents, Children and the Search for Identity by Andrew Solomon
The Harm in Hate Speech by Jeremy Waldron

Read about our 2012 winner, Richard Sennett for his book Together: The Rituals, Pleasures and Politics of Cooperation and about our 2011 winner, Peter Lovenheim for his book In the Neighborhood: The Search for Community on an American Street, One Sleepover at a Time.