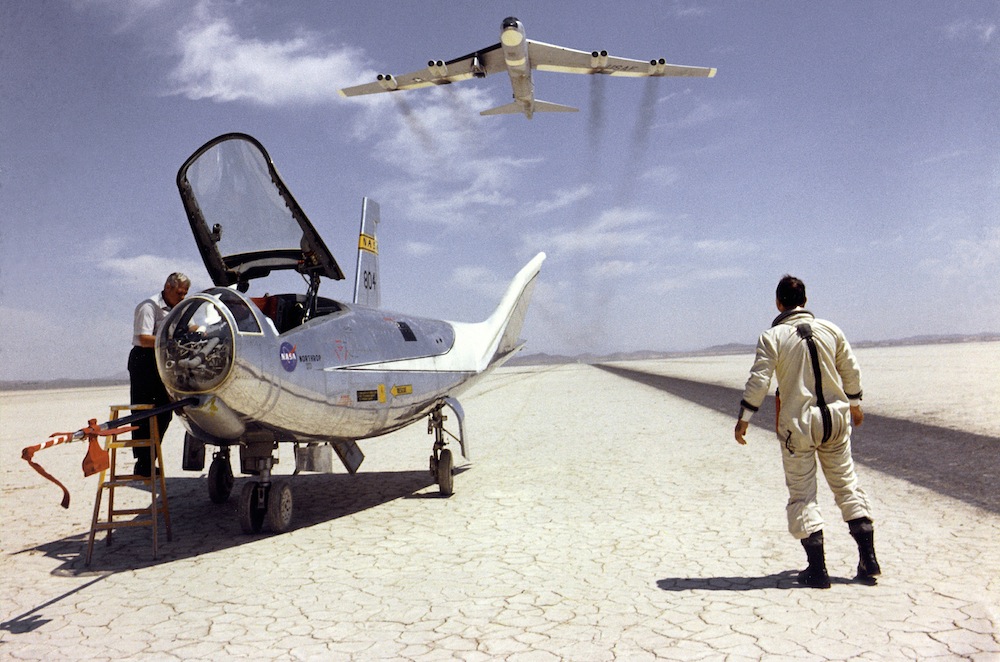 Have the budget cuts in Washington, known as the sequester, brought on another great decline of California aerospace, the business that built L.A.? The history of Southern California’s aerospace industry is usually described in broad strokes—as an unbroken 20th century rise, followed by a post-Cold War decline. But the real history of aerospace is much more complicated and volatile—and, if past is prologue, the future may surprise us.

Since its very start, aerospace has been an industry of booms and busts. The first boom came in the 1920s, when the feats of Charles Lindbergh and Amelia Earhart were capturing the public imagination. The federal government opened airmail contracts to commercial carriers, which soon expanded into passenger service. Aviation firms rushed to fill orders from the new commercial airlines, and by 1928 Southern California boasted over 25 airframe and aircraft-engine manufacturers. But the boom times ended with the Depression, and many firms went bankrupt—even those (like Lockheed) that eventually survived and thrived.

The business revived with World War II, when aviation became the largest industry in the world and Southern California became a defense plant. Two million people worked in local aviation factories; individual plants had 100,000 workers in shifts around the clock, turning out tens of thousands of planes over the course of the war. But even before the end of the war these firms started to demobilize, in a process that shed hundreds of thousands of workers—including most of the women who had joined the workforce as “Rosie the Riveter.”

The postwar downsizing was short-lived, thanks to the Cold War and then the space race. Supersonic fighter jets and guided missiles; satellites for communication and spying; massive rockets that delivered humans to the moon and robotic explorers to the furthest reaches of the solar system—many of these marvelous machines came with a “Made in Southern California” label. The aerospace engineer, the young man with a crew cut and horn-rimmed glasses, short-sleeved white shirt and skinny black tie, became the image of competence personified.

In the early 1970s, though, with détente, exit strategies in Vietnam, and the last of the moon landings, many of those competent engineers found themselves out of work. A dark age descended on Southern California, and by 1977 Time magazine was declaring, “California has clearly lost the magic it once had.”

Even as that gloom was spreading, however, another revival was gathering speed, driven by a defense buildup that began under President Carter and accelerated under Reagan. The F-117 Stealth aircraft, the B-1 and B-2 bombers, and the space shuttle were just the most visible—or, in the case of Stealth, invisible—products of Southern California aerospace. Southern California engineers dreamed up and built the high-tech wonder weapons that helped the U.S. win the Cold War.

But victory in the Cold War proved bittersweet for Californians. In the early 1990s, hundreds of thousands of defense workers got pink slips, and economic dislocation swept the area. The 1993 film Falling Down, in which Michael Douglas played a laid-off aerospace engineer who embarked on a violent rampage across L.A., captured the era’s atmosphere.

In the short version of history, this marked the end of California’s aerospace heyday. But reduction didn’t mean disappearance. After 9/11, the military relied heavily on aerial drones and reconnaissance satellites. Commercial satellites from Southern California also became more important for GPS, cell phones, satellite radio, and TV. Then there was the rise of so-called alternative-space or alt-space, with Burt Rutan and Richard Branson pursuing space tourism and Elon Musk’s SpaceX building new generations of rockets. Southern California remained an aerospace center.

Aerospace lifted countless Californians into the middle class and underpinned the suburban lifestyle that symbolized Southern California. But this came with a cost, counted in episodes of mass unemployment and economic dislocation. The budget cuts of Washington’s sequester will complete the fifth round of rise and fall for aerospace. Perhaps the cycle will continue and aerospace will recover again; perhaps it won’t. Either way, it’s of little consolation to the many individuals facing layoffs.

With aerospace, the good times have always come and gone, the day of reckoning has often arrived all too soon. On the bright side, we’ve lived through this before.