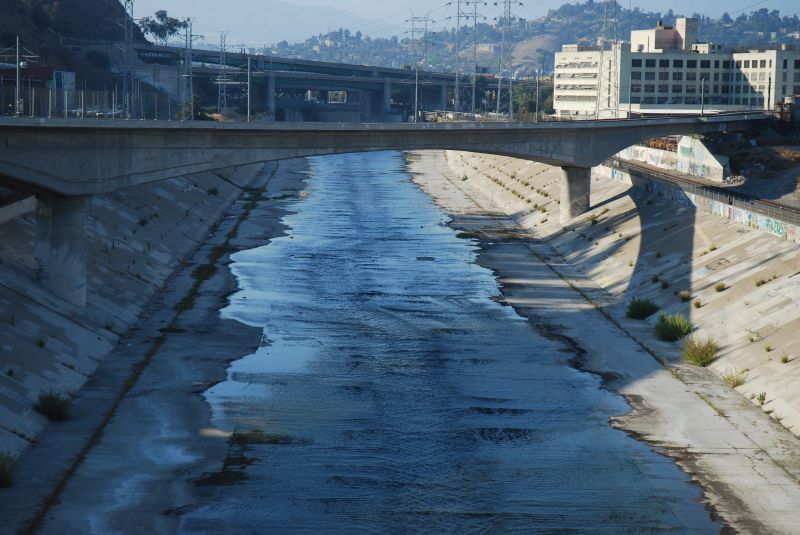 This piece was cross-published by The Getty Iris and Zócalo Public Square.

On the list of path-breaking private houses is everything from Irving Gill’s Dodge House of 1916 to Tadao Ando’s Malibu residence, still under construction. Yet the list of path-breaking public structures is pitifully short, especially for a city that has been a mecca for architectural talent. Once you’ve named the Bradbury Building, City Hall, Bullock’s Wilshire, the Department of Water and Power headquarters, the American Cement Building, Disney Hall, and the occasional gem like the Coca-Cola bottling plant on South Central Avenue, the roster quickly turns kitsch or plebeian. 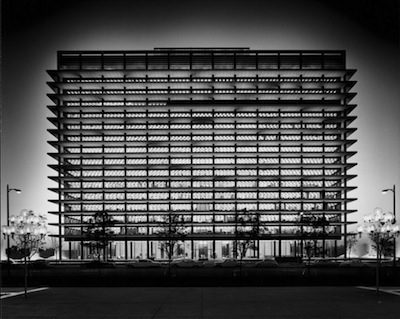 The LADWP Headquarters in Downtown Los Angeles—an exception to the city’s rule of mediocre architecture.

Los Angeles has not one thrilling subway station portal and not one inspiring modern skyscraper. And all the billions of dollars spent by the Los Angeles Unified School District in the past decade on innumerable new campuses have produced nothing of any architectural value except a singular spiral folly that ascends from nowhere to nowhere, atop the main auditorium of the Ramon C. Cortines School Of Visual And Performing Arts.

Given this dismal record of public structures, can we even say architecture has mattered to Los Angeles? For all its talents and blessings of natural splendor, L.A. is a model dystopia. Wide swaths of the city are dull, sometimes even bleak. You can go for blocks and blocks without encountering a single, consistent architectural motif, and much of the landscape is encrusted with buildings that are little more than studio props decorated with a thin commercial patina of advertising—buildings as billboards.

All true. But this would be a misreading of Los Angeles and the nature of its architecture.

For starters, Los Angeles is perhaps the world’s first modern and almost purely “infrastructural city.” With no central force driving the city’s design—no Daniel Burnham, no Robert Moses—with an official sanction and scepter to wield, every effort to adopt a citywide plan floundered, leaving Los Angeles to the whims, and tightwad budgets, of developers. So the greatest public monuments in Los Angeles are not buildings at all. They are the enormous public works projects wrought by engineers: William Mulholland’s 1913 aqueduct, a siphon that, without a single pump, drew water from the Owens Valley to the San Fernando Valley; the freeways that crisscross the basin, designed by the state’s highway department; the more than a dozen bridges spanning the Los Angeles River, built between 1909 and 1944, the majority constructed by city engineer Merrill Butler; and the river itself, cemented and rip-rapped by the U.S. Army Corps of Engineers.

Without the foreign supply of water, without the easy means to cross the river, without the freeways (creating and abetting sprawl), and without the channelized river (liberating the plains south of downtown from the vicissitudes of a sometimes drunken, mad river), the free-form city would never have emerged. These engineering marvels are at once the framework of the city and among its most beautiful creations.

All this infrastructure—and countless smaller bits and pieces of engineering magic—allowed the city to spill out of the center, willy-nilly, and with alarming briskness, causing the center to decline in importance as rapidly as it emerged. Even by the 1920s, when downtown Los Angeles was booming (and when many of the buildings we are anxiously converting to lofts today were built), the civic center was loosening its grip on the city at large. The expansive fury spawned by all that poured-in-place concrete permitted architecture to become a mutt. There was no slow movement of time that allowed a progression of building types that might have been native reflections of the landscape.

The Day of the Locust author Nathanael West, an Eastern snob with a phony pedigree and an excoriating pen, described the result: “Mexican ranch houses, Samoan huts, Mediterranean villas, Egyptian and Japanese temples, Swiss chalets, Tudor cottages, and every possible combination of these styles,” which, he peevishly suggested, ought to be dynamited. Mostly, we’ve just remodeled them—or left them to a slow decline.

Within this permissive chaos, a vernacular architecture has emerged. The design has less to do with the original appearance of the buildings than with how they have since been occupied and bent to new purposes. Cruise the boulevards and you’ll see a noisy clash of storefronts vying ceaselessly for attention—in a multiplicity of languages, scripts, fonts, colors, and materials. You’ll see entire buildings decorated in florid hand-painted murals or flooded in the fluorescent whiteness of illuminated plastic signs.

Typically, the facades have all but disappeared. What was once an undulating Zig-zag Moderne market, or a vaguely Rococo Spanish Colonial Revival restaurant, or an ordinary concrete block auto repair, has now metamorphosed into a Laundromat or a pawn shop or a storefront church.

This is architecture as it was once understood in the early New England village and in the original Spanish land grant. It is not a time capsule or shrine. It is an evolving collection of places in which citizens engage one another within a world of their shared making. This kind of architecture is about settling in, adapting, and accommodating a shift from one set of aims and hopes and desires to another.

And this is the architecture that matters in Los Angeles. It comes from the bottom up, not the top down. It springs from a multiplicity of influences, rather than just one. Outwardly, it appears messy, even ugly, especially to outsiders. It is also what gives our city its life and vitality. Without this percolating, mutable, and, yes, frustrating form, Los Angeles would be a city with less visual clutter—and a far duller place.