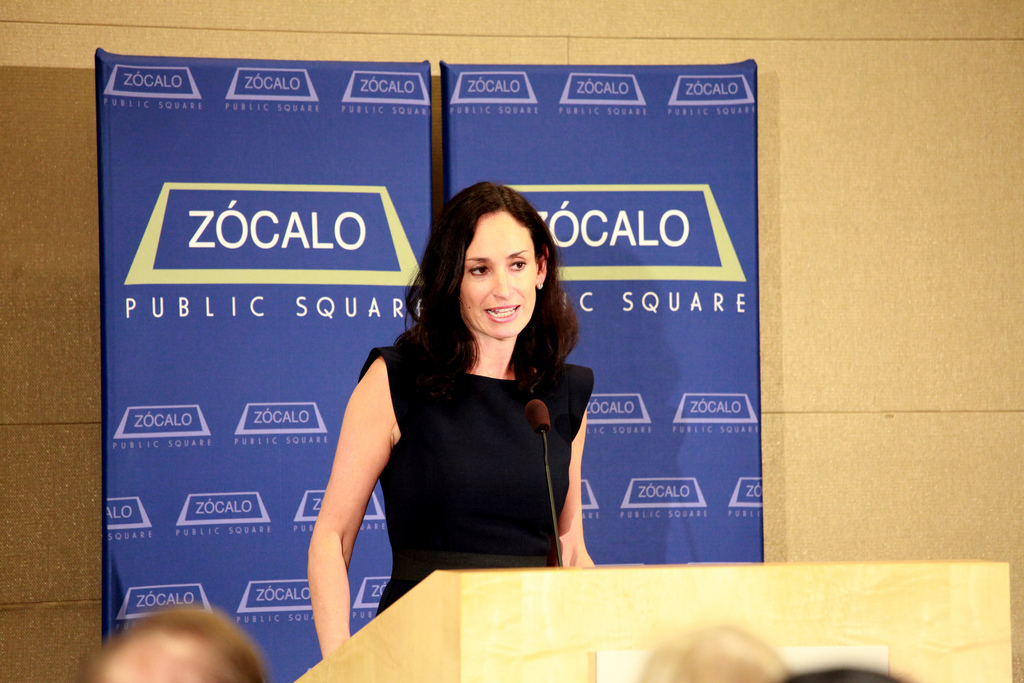 Council on Foreign Relations Latin America analyst Shannon K. O’Neil, author of Two Nations Indivisible: Mexico, the United States, and the Road Ahead, was amazed by the enthusiasm she felt and saw when she first came to Mexico in 1994. NAFTA was beginning to take effect, the middle class was growing, and Mexico City was always noisy, because so much construction was going on. But then the peso crisis hit, and the country was thrown into one of the worst recessions it had ever seen.

“This could have been the end of Mexico’s story,” O’Neil told a crowd at the RAND Corporation. “Instead it was a tipping point for Mexico.” The United States stepped in to assist, the middle class rebounded, and voters, fed up with the autocratic Institutional Revolutionary Party (PRI), brought real democracy to the country.

By the mid-2000s, when O’Neil returned to Mexico, she could see that changes there were permanent and ongoing, from the better quality of the air and the geographical expansion of Mexico City to the presence of supermarkets and big-box stores like Wal-Mart and Costco, which has led to the price of basic goods in the country falling by half.

Mexico has been on a rise economically, politically, and socially. As a result, its economic ties to the United States have deepened. Trade between the two nations has quadrupled since NAFTA was signed; $500 billion go back and forth every year.  Many American companies have reacted to globalization by making products in both countries: If you look at the products the U.S. imports from Mexico, 40 percent of those products were made in the U.S. by American workers.

“Mexico today is by far and away the best partner not just for U.S. companies but for U.S. workers,” said O’Neil, thanks to “this deep integration and the fact that we really make things together.”

The nations are also tied personally, thanks to an unprecedented wave of immigrants from Mexico who have come north since the 1980s. Today, there are over 35 million Mexicans and Mexican-Americans in the United States. Migration has shifted dramatically in the past few years, with inflow recently reaching net zero, but the connection that’s been forged is a permanent one.

Other countries, said O’Neil, may capture American headlines. But there’s no other country as important to the U.S. on a day-to-day basis as Mexico, which is where our vegetables come from—along with our drugs, our car parts, and many of our consumers.

However, Mexico faces some tremendous challenges as well, the biggest of which is security, thanks to a rise in organized crime and drug trafficking. The border city of Ciudad Juárez boasts big factories as well as a recent designation as the most dangerous city in the world.

Security isn’t just an issue for Mexico; it’s one that Mexico and the U.S. have to face as partners. O’Neil concluded by asking the two big questions that just might define both nations’ futures: Can we benefit from our interconnectedness? Or will we be pulled apart by violence?

In the question-and-answer session, audience members asked O’Neil to talk more about what she thinks the future holds for Mexico.

What changes will new president Enrique Peña Nieto of the PRI bring?

O’Neil does not think the return of the PRI to power means the country is going to go back to the old ways of doing things. There are checks and balances among the three branches of government that will prevent an imperial presidency from returning, she said. And the media is free to criticize, investigate, and shame corrupt politicians in ways they weren’t before.

What can Mexico do to combat violence and security issues?

O’Neil called violence Mexico’s “fundamental challenge”; it threatens to undermine everything from democracy to the economy. A big problem is corruption impunity, which O’Neil thinks the nation can fight. It takes a long time to purge a country of corrupt officials and enforce the rules—but the United States was able to do it, and Mexico might be able to, too.

Will the rural, southern, and poorest parts of Mexico get to participate in this economic and political boom?

Mexico’s southern states, O’Neil acknowledged, have not reaped the same benefits as the northern ones. Many of the states that never left PRI hands are in the south, and that part of the country scores lower on human rights indices than the north. The major challenge is infrastructure; there aren’t roads or airports or train routes that connect the south to the rest of the country, and to America. If Mexico spends on infrastructure, a lot of other problems might be solved for the south, she said.

Where will Mexico be 20 years from now?

Mexico, said O’Neil, is at a crossroads. She sees one future where it has a top-10 economy and is a strong ally for the U.S. globally. But there’s another future where Mexico just muddles through its problems, doesn’t get the violence under control, and doesn’t improve the education system. The actions Peña Nieto’s government takes in the next six years, she said, will either set Mexico on a better path or result in an enormous missed opportunity. 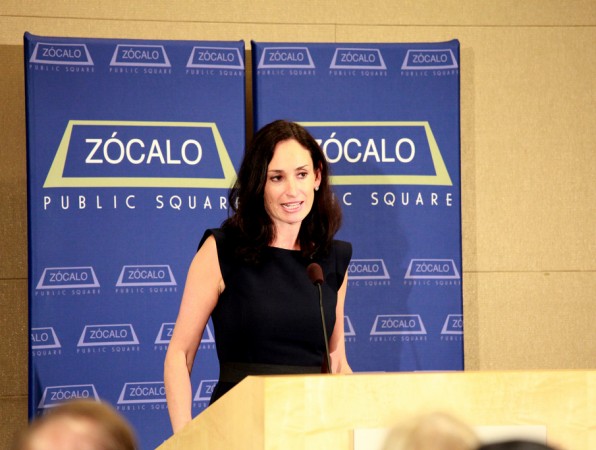 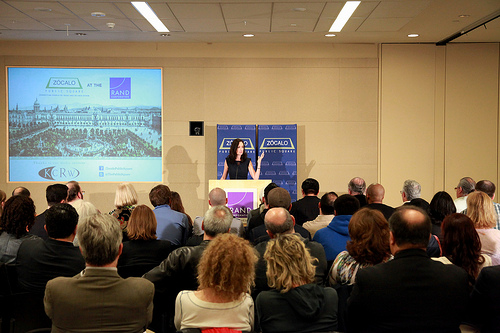 The crowd at the RAND Corporation 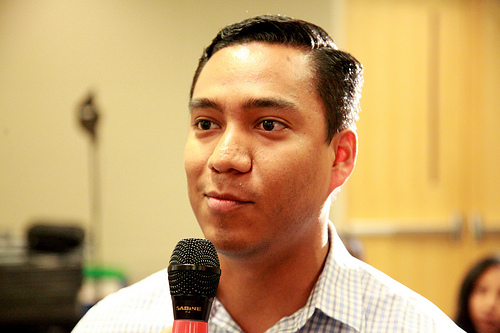 In the question-and-answer session, the audience asked O’Neil what the future holds for Mexico 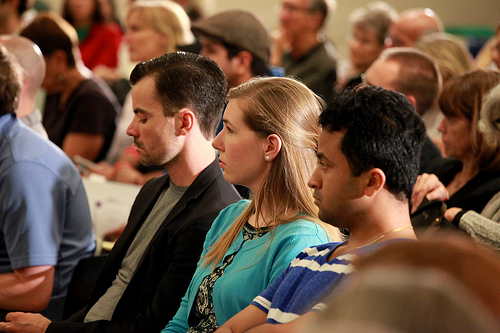 The audience listens on 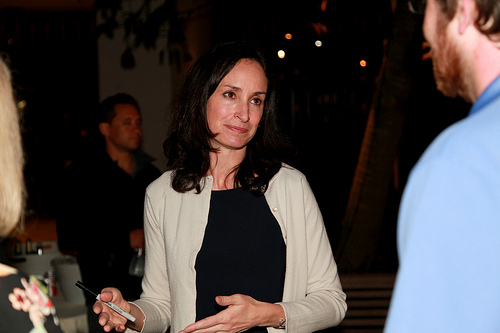 O’Neil talks with guests at the reception 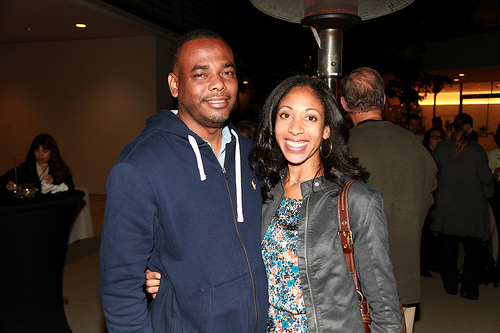