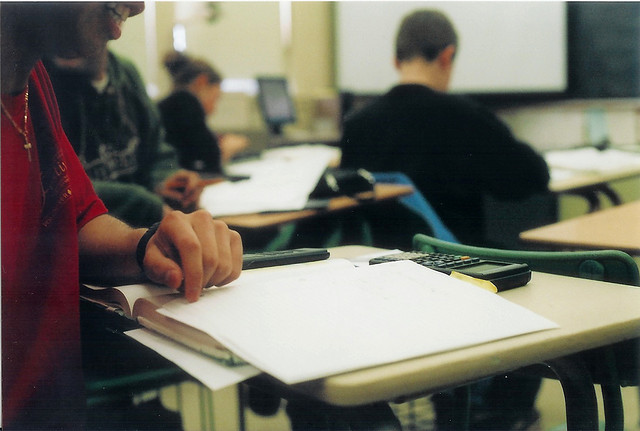 Algebra was responsible for the first F I ever got.

While I was never a straight-A student, I wasn’t a screw-up either. But tell that to Mexican-immigrant parents who dropped out of school after first grade and took pride in seeing their offspring get the education they never had. I’ll never forget that dreadful parent-teacher conference in seventh grade or the silence in our minivan on the way home. There was no congratulatory feast at Shakey’s Pizza that night, as I was about to enter an academic era marked by one perpetual frustration: mathematics requirements.

I’ve never passed algebra. I coasted through middle school arithmetic classes, and, in high school pre-algebra, when math bit me in the rear, I bit back and weaseled my way to a C by teaching my teacher—who was having troubles with his wife at the time—how to play “Angel Baby” on the acoustic guitar. Geometry came next, and I passed with no trouble.

Fast forward to my still Algebra-less senior year in high school. Without a passing grade in algebra, I couldn’t graduate—but I got lucky again. Apparently, my problem with algebra was shared by many other students and posed a threat to the pristine record of my “California Distinguished” high school. The administrators decided to count Accounting I as an algebra equivalent. I passed that with a B+.

When I entered Pasadena City College in the hope of transferring to a four-year institution, the placement exam put me two classes below the California transfer requirement class of Statistics 50; that left me with a long way to go. Eighty percent of my fellow incoming students also place into below-college-level math, according to PCC’s research office.

Four and half years later, I still haven’t passed. I have enrolled in algebra class and failed more than once. OK, let me be honest: I’ve failed algebra seven times. I started to question my character, my brain, my capabilities, and even my values. How was I able to write a cover story for Saveur magazine in 2011 but unable to pass a class that involved mixing numbers with letters?

I forced myself to get my cognitive functions tested at the school’s Disabled Student Programs & Services (DSP&S). It took a full semester of weekly, proctored tests to find out that—yes—I did indeed have an official mathematical deficiency in my brain. What did that stamped piece of paper get me? Extra time to take tests if I needed it. But I still had to pass algebra.

A DSP&S adviser saw my frustration and almost convinced me to drop out of school. She showed me an article in a magazine arguing against college education. Nonetheless, I disregarded her—and many others who gave me similar advice—and tried my luck with slower-pace pre-algebra classes that were computer-based. I still failed and failed.

Ready to break down in desperation, I made an appointment with my academic counselor. He pulled out a folded sheet of paper stashed away in a drawer. It advertised a new class that combined two segments into one, landing you right in Statistics 50. In short, passing this class would get me to the next-to-last step. It was called “Exploring Topics in Mathematics.”

The class met four days a week for exactly an hour and 25 minutes, just long enough to let us learn something new but not long enough to drag on. The 35 students enrolled were just as varied as you would imagine. Most were African-American or Latino. One was Asian with tattoos. Another was a heavily made-up white Goth girl who was half-an-hour late everyday. There was the elderly lady who was a painter and the middle-aged Iranian lady who was just about to get married. All of us were math failures.

The teacher was Professor Jay Cho, a slender, soft-spoken 41-year-old from Korea who had received his masters in mathematics from UC Irvine. On day one of class, he immediately won our hearts by deeming textbooks of any kind unnecessary. That was a good $150 saved. “Nobody does it this way,” he told us. “But I’m doing it this way.”

Continuing in his heavily Korean-accented English, leaning on his desk, Cho said, “You can just call me Cho for short, or, as some of my past students called me, notorious C-H-O.”

Before long, going to class started to feel like a family reunion. It was, dare I say it, fun. Everybody shared the pain, and there was a relieving sense of acceptance. Cho taught us how to complete linear equation problems, something that used to give me headaches, by relating them to blood alcohol levels when you drink and drive. (It worked. I got a B on that exam.) He used the almost-daily tardiness of the Goth girl to teach us relative frequency approximation of probability. I loved it. It was a modern-day version of Stand and Deliver.

Inevitably, some of my classmates wasted everyone’s time. A lot of them would seize onto Cho’s examples and contrast them with some irrelevant personal experience. Cho might be discussing how, say, your heating bill goes up in the summer, and some student might start talking about how his heating bill actually goes down in the winter because his neighbor pays for it. These random personal anecdotes might spark fiery debates on tangential topics, like how long it takes for a beer to burn off. But Cho always let these conversations run their course without losing control of his class. Even disrespectful behavior didn’t faze him visibly. One time, a classmate was rude enough to have a friend walk in (without knocking) in the middle of class and deliver a venti Caramel Frappuccino. Cho remained unruffled.

Twenty of the 35 of us passed the class. That was a far higher rate than normal for the level of math we were being taught. We’d learned about probability models, confidence intervals, and chi-squares.

Cho later told me that the curriculum was created after he and colleagues surveyed professors in other fields and asked, “What math do your students need to be successful in your class?” Pasadena City College has been supportive of efforts by Cho and his like-minded colleagues to implement an alternate sequence for math that is friendly to majors in social sciences and humanities. The working name is “Quantitative Literacy,” and it will include math topics like proportions, finance, and data analysis.

But my story doesn’t end there, because after passing “Exploring Topics in Mathematics” I still had to get through Statistics 50, also taught by Cho. And how did that go?

The only bright spot was that it wasn’t algebra for the eighth time in a row. But it still meant I’d be unable to transfer to a four-year school—unless I were to take it again and pass. Cho felt I just hadn’t devoted enough time to studying. I wish the explanation were that simple.

According to California’s current regulations, I am ineligible for college. Technically, I’m even ineligible for a high school diploma. The thinking in such policymaking is that 1) despite all the failed attempts, those of us who fail algebra are secretly able to pass it; we just have to push ourselves a little harder. And: 2) that higher education would be wasted on someone who can’t pass algebra.

But are those assumptions valid? Can I really pass algebra? I don’t think so. Should I, as a result, be unable to enroll in college and pursue a major in languages or art history? Again, call me biased, but I don’t think so. I don’t think my inability to solve quadratic equations should be a deal-breaker for any further education. I don’t think it should have brought me or so many of my classmates to the brink of high-school-dropout status.

“Math is becoming a filter for a lot of people,” Cho told me recently. “Structurally, we are designed to lose a lot of students. The state gives us a lot of money for nothing. Returning students are forced to retake the class and shut out valuable space for new students.” In Cho’s view, his new teaching style addresses the problem. In my view, Cho’s an amazing teacher, but not a miracle worker.

Either way, the Statistics 50 requirement is here to stay, because, officially, high school graduates are all required to master Algebra II. And community colleges can’t set lower standards than high schools. All of this is bad news for me. I’ve finally dropped out, and now I’m supporting myself through writing. It’s also bad news for so many students who are jobless and trying to get a college education after 20 years out of school. I would love to learn more about art, philosophy, literature, and history in a college setting. Math requirements will prevent that. Should they?