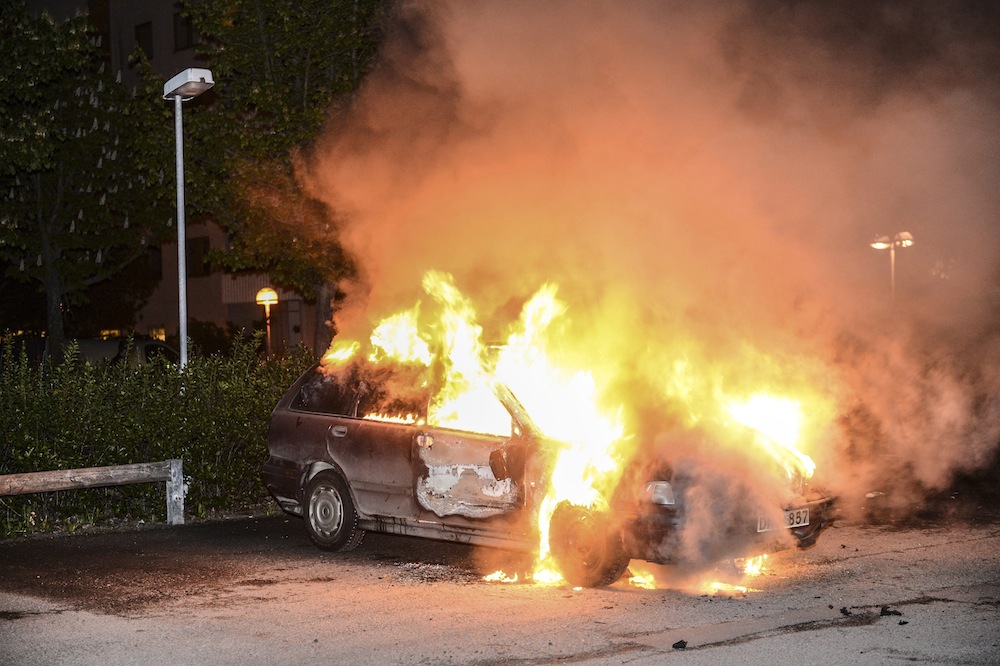 I moved to Sweden 26 years ago, a Swiss native and journalist following his wife home to Falun. I became a citizen in 2000 and feel the country is my own. I am proud to live in one of the world’s most equal and democratic societies. So it is jarring that such a large group of people here feel they are fundamentally unheard.

I spent last week in the suburbs of Stockholm covering the worst riots in Swedish history and meeting young citizens like Omar. He is a 19-year-old Swedish-born citizen. His parents came from Somalia in the early days of the civil war. In Sweden, they found a safe and prosperous place to live, with free schools and strong social benefits for everybody.

I encountered Omar sitting outside a local grocery store in the Stockholm suburb of Husby after yet another night of violence. “The police were hunting us all night,” he told me.

It all started a couple of weeks ago with the police shooting of a local Husby man, a 69-year-old immigrant from Portugal, on his own balcony. Stockholm police claimed that the man had been threatening officers with a machete knife. Omar doesn’t believe their story. “They executed him, because he was a foreigner,” Omar said. His friends, who all wore black hoodies, nodded in agreement. Since then, hundreds of cars have been burned, and schools have been destroyed all over Stockholm.

Stockholm is a famously nice and wealthy town, though most of the rioting has taken place where Stockholm isn’t so nice or wealthy. Omar and the hundreds of other young men and women who are on the streets at night live outside the Swedish capital. In the ’60s and ’70s, the Swedes built thousands of concrete buildings, most of them eight to 10 stories tall, on what had been open green landscape. They were conceived as homes for the country’s many new industrial workers.

Workers came to these homes not only from the Swedish countryside but also from neighboring countries and later from poor southern Europe. These immigrants arrived as workers and stayed as citizens. Many of them have since moved away from poorer suburbs like Husby and taken their place in a huge Swedish middle class that is often portrayed as a global model for a welfare state. Sweden has high taxes (up to 60 percent of normal income), strong funding for public programs (public expenditures approach 60 percent of domestic product), and a social cohesion that has been studied around the world.

The riots challenge this narrative. How can it be that people who have been treated so well choose to riot and destroy infrastructure like schools, fire brigade stations, and local grocery stores? How can these riots be happening in one of the most equal and democratic societies on the planet?

So far, the elites of Sweden, shocked about the sudden violence, have been leaning on familiar arguments that fit their agenda. Conservatives are calling for more police. The left, which is in opposition, wants even more state intervention in the economy. The far-right nationalists say this is all the natural consequence of a far too liberal immigration policy. The moderate Prime Minister Fredrick Reinfeldt, for his part, has suggested that no new thinking is needed. “These are violent individuals who must be stopped,” he declared. “We will never accept that people who riot will set any agenda.”

There is something to be said for each of these points of view. But the arguments also tell us as much about the Swedish elite as they tell us about the particular problems of Husby and other suburbs. All are top down. Each definition of the problem as a big, broad malady suits the instinct of people accustomed to resolving such things with some broad, national policy or some new, centralized program.

Is it something about suburbs? Remember the riots in the banlieu of Paris or the northern part of London? Those, too, happened in wealthy democracies with generous welfare states.

What would satisfy the rioters? I’m struck by how people like Omar and locals who are trying to stop the violence say the same thing: They want a voice—and the power—to shape the future of their own communities.

“Nobody listens to us, the state is our enemy,” said Omar.

“Nobody cares about us,” stated Imre, a local shop owner who has been combating the violence by organizing parents into “night walks” to police young people on the streets. “What we have now is some form of perverted agenda-setting power by throwing stones. That’s too bad.”

Omar and Imre are both right, because they are identifying the same problem: the lack of local democracy.

Sweden and other countries of 21st-century Europe may have strong national democracies and social benefits. But local cities and suburbs have little in the way of democratic institutions and tools. They are pawns in national plans. Communities cannot shape their own destinies.

This country has 9 million people but 290 municipalities. Many of them are forgotten and powerless. Husby is one such place, two municipalities away from the capital, Stockholm. Few people in the Swedish elites ever come here. The detachment is real.

The riots, as awful as they are, have connected these places to the rest of Sweden. This is an opening, an opportunity to provide communities with more autonomy, to build local democracies as proud as our national ones. So far, none of the elites of Sweden, or of Europe, are seizing this moment, and fine-tuning democracy. It is work that needs to be done. The riots continue.