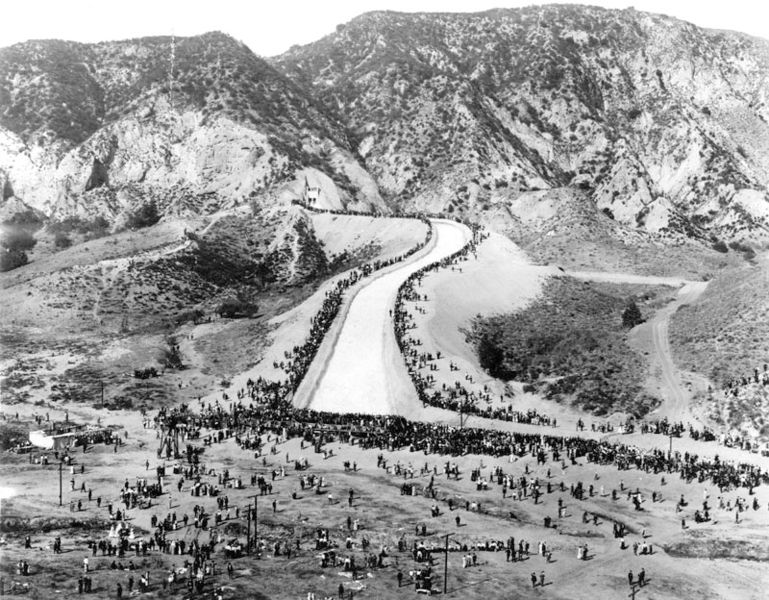 Newsflash! Los Angeles, a famously dry place, this month has been suddenly inundated. The source is not rain, not El Niño. Nope, we’re experiencing a flash flood of commentary tied to the 100th anniversary of the opening of the Los Angeles Aqueduct.

Fueled by donations from an artist who is a member of the wealthy Annenberg family, a host of California institutions—magazines, newspapers, journals, libraries, museums, studios, schools, and nonprofits—have produced more stories, photos, art, scholarship, exhibits, events, and archival projects on the aqueduct than a single Angeleno could process in, well, a century. And while much of the work is beautifully done, a lot of it also reinforces the nonsense that makes it so hard for Los Angeles to reckon with its problems.

The biggest currents in the flood of commentary are these: that the aqueduct is a singular, only-in-L.A. engineering accomplishment; that it was responsible for the creation of the city; and that it was the city’s original sin, committed by a few powerful people who held L.A. in their sway. All of this new commentary is seasoned with the spice of self-congratulation over finally having a conversation about water after 100 years of supposedly ignoring it.

It’s not just that all of this is wrong. (Has there ever been a time when L.A. wasn’t talking about water?) It’s that it all reeks of the disease that might be called “Los Angeles exceptionalism,” the notion that this is a place different from all the rest, as if skullduggery or deception or imported water makes L.A. unique.

For the record, imported water has been a feature of cities since Roman times. Even places wetter than L.A. take the water of others. New York built its first two aqueducts in the 19th century, decades before the L.A. Aqueduct. San Francisco, for all its environmental self-regard, still relies on water taken from the Hetch Hetchy Valley in Yosemite National Park, part of a project that began the same year that the L.A. Aqueduct opened.

Even if you think that Los Angeles’ treatment of the communities in the Owens Valley was extraordinarily sinful, it wasn’t our original sin. The city had been growing rapidly for more than 30 years before the aqueduct, and that growth was—and I use this word pointedly—natural. This place, with fine weather and rivers, was always well-suited to people (the Indians prospered here before the missionaries, the real original sinners, showed up). And early-20th-century L.A.—oil-rich with its low land prices and embrace of scientific innovation and higher education—was a good place for ambitious people to be.

It was the pressure and reality of that growth—not some conspiracy of powerful Angelenos—that led L.A. to look for water elsewhere. L.A. didn’t act alone or extra-legally. The federal government approved the project. If L.A. hadn’t built an aqueduct into the Eastern Sierra, we would have gone elsewhere—as we eventually did.

So why do we cling to this narrative of ourselves as sinful water thieves who built a city in a desert (which is in fact not a desert)? Quite simply, we Angelenos love the idea of ourselves as rogues. Living in a place so relentlessly bright and sunny isn’t a sexy narrative, so we make ourselves the anti-heroes of our own story. We even celebrate the gangster Mickey Cohen as a city father.

And we adore the movie Chinatown, in which L.A. (as depicted by screenwriter Robert Towne) is a fallen, corrupt place held in incestuous sway by one powerful figure (spoiler alert: it’s John Huston’s Noah Cross) who fools the public in order to bring water to the San Fernando Valley, where he secretly controls land. The movie’s central narrative is so well known that virtually all of today’s L.A. Aqueduct remembrances reference it.

For years, historians and journalists have put Chinatown in context by saying, lazily, that the historical particulars of the movie are mostly wrong but that it gets at a larger truth about L.A. and its water. But that supposed larger truth—that L.A.’s expansion was a conspiracy of a few powerful people—is misleading at best.

L.A.’s real modern history is distinguished not by conspiracy or corruption—but by a Progressive devotion to anti-corruption and a fear of concentrated power. This is the land of endless commissions, of weak mayors, of nonpartisan elections, and of sidelined political parties. Much of our growth was unplanned, and it was always hard to get big things done. The aqueduct, as a public project successfully completed, should be celebrated—but more as exception than rule.

The self-appointed civic leaders of Los Angeles have always been good at puffing themselves up—and bad at following through on their grand plans. This is a city full of Wizards—of Oz. And our corruption has often been more pathetic than powerful. It’s fitting that this month’s aqueduct centennial coincides with news reports that a state senator from L.A. County, Ron Calderon, took $88,000 in bribes—but was unable to deliver on the legislation he allegedly promised to those giving the bribes.

Of course, it is the banality of L.A. civic life that makes the conspiracy theories and cinematic narratives so powerful. We’d rather believe in shadowy power than reckon with the fact that no one is in charge. The Chinatown narrative—it’s the powerful guy’s fault—absolves us not only of blame for L.A.’s problems but also of responsibility for solving them.

The ostensible reason for all this month’s aqueduct remembrances is that they are supposed to spark a conversation about what we need to do to use water wisely and build a brighter future. But telling the story as if it’s out of Chinatown, with L.A. conceived in sin and built by a few powerful people, doesn’t serve this purpose. You don’t spur people to action by telling them that the fix is always in.

The bigger question is this: Can L.A. ever stop thinking of itself as an exceptionally unnatural or corrupt or fallen place? You can try to debunk the conspiracy theories. You can try to argue that we have the power to write our own history, just as we did in the past. You can try to convince people that we’ll never get our act together as long as we believe that a few powerful people control everything. You can … Ah, forget it, Jake. It’s Chinatown.