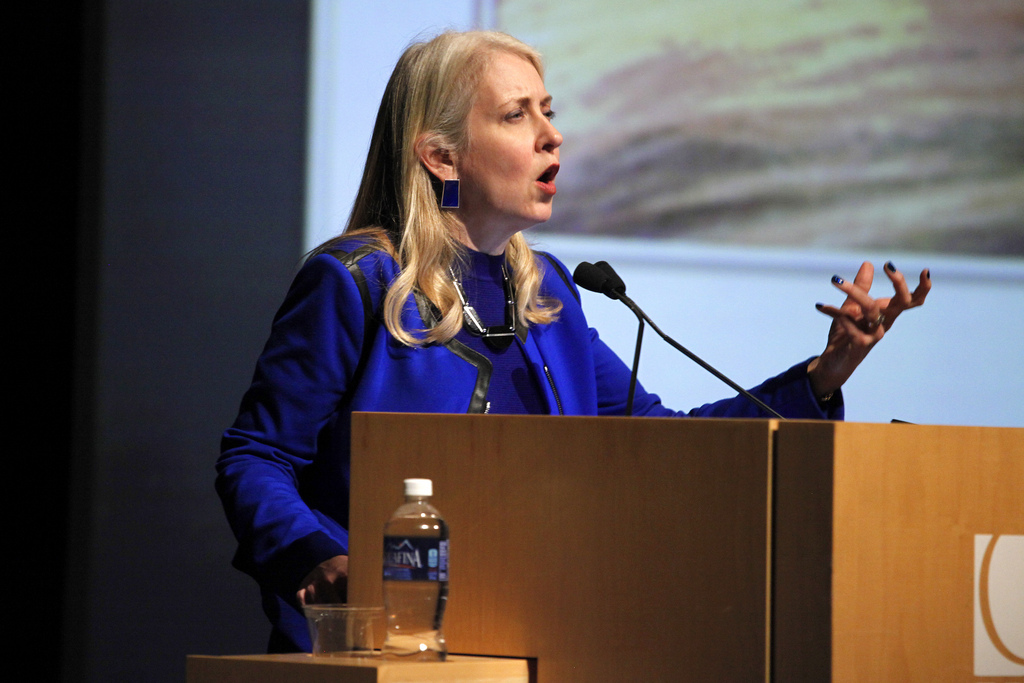 What defines glamour, and why do we need it? Bloomberg View columnist Virginia Postrel, author of The Power of Glamour: Longing and the Art of Visual Persuasion, offered her thoughts on what makes up this elusive quality—as well as her thoughts on what glamour is not—at a Zócalo/Getty Center event.

“Glamour is not in fact a style. It’s not a personal characteristic,” she told the crowd. “Cars can be glamorous, cities can be glamorous, ideas can be glamorous.” But what is glamorous—like what is funny—changes depending on the audience. Like humor, glamour requires an audience and an object interacting and creating an emotion. In the case of humor, the emotion is amusement. In the case of glamour, it’s a sense of projection and longing: If only I could be like that, be with that person, be in that place, have that thing.

“Glamour is a form of nonverbal persuasion,” said Postrel. It’s sometimes deliberately constructed, but it also can emerge organically—just as humor is sometimes written by people trying to be funny but can also come about spontaneously.

Glamour takes our inchoate longings—to be recognized, respected, or loved, or to be comfortable or wealthy—and focuses them on an object. That object might be material—a rocket ship, a beautiful piece of clothing. But it can also be experiential—electing the right president or pursuing the right career. And it’s not just for women: “How many pairs of Air Jordans have been sold with this notion that these sneakers will make you a whole and complete human being?”

Postrel told the story of a young dancer named Michaela DePrince to explain how glamour has the power to change lives. When DePrince was 4 years old, she was living in horrible circumstances in an orphanage in Sierra Leone. But one day she came across a dance magazine, and tore off the cover with an image of a ballerina. She hid the photograph in her underwear—her only private place—and at night she’d lie in bed and look at it, imagining herself as that ballerina. That image, she says, saved her: “It gave her this desire to live another day, to keep on going,” said Postrel. DePrince got very lucky and was adopted by an American couple and began taking ballet lessons; today she is a professional dancer.

“That is glamour shaping someone’s life,” said Postrel. “She sees the picture, she imagines herself, she projects herself into it, she focuses her longings, and she acts upon it.” The example might be extreme, but a generation of journalists was inspired by Woodward and Bernstein (or at least Dustin Hoffman and Robert Redford playing them in All the President’s Men), while the television shows L.A. Law and CSI inspired many to become lawyers or forensic scientists. Glamour, said Postrel, can open our imaginations to what we might become: “It takes our discontent, and it focuses it.”

In 2005, Barack Obama exuded glamour not just because he was young and good-looking but because he was someone onto whom people could project their hopes and dreams for the country and what they wanted in a president. He didn’t have a long public record, so he remained mysterious. “Here was somebody who could lift us out of whatever you were dissatisfied with in the country and transport us to a better, different life in better, different circumstances,” said Postrel.

There are three elements, she said, that make glamour work. The first is that it promises “escape and transformation,” giving us a sense of taking us out of the everyday. We find glamour in Superman, in travel, and in fashion. Yet the most glamorous store in America is not Tiffany & Co. or Bergdorf Goodman, she said: It’s the Container Store. We don’t want luxury but a sense of having control over our lives. Looking at boxes and shelves gives you the sense that your life will be perfect—as long as you have the right containers.

The second is that glamour is an illusion. It’s full of grace and ease—there’s a sense that it’s effortless. In the movies, Fred Astaire and Ginger Rogers meet up in a park and start dancing; in real life, they spent hours practicing, and other people spent hours working behind the scenes. And the glamorous dresses of the golden age of Hollywood were often too tight—actresses were sewn into them—or too heavy for actresses to sit down while wearing them.

The third element of glamour is mystery; it leaves something to the imagination. “Glamour is neither transparent nor opaque,” said Postrel. “It’s translucent.” It allows us to see a tantalizing amount of the object at hand, but then we fill in the details with our imaginations and our longings.

Postrel said that glamour and charisma are often conflated, but they are two different things. Bill Clinton is charismatic, as are most politicians; Barack Obama is—and John F. Kennedy was—glamorous. Joan of Arc alive was charismatic, but in death she became glamorous. Charisma is not mysterious, and it’s a characteristic of a person only; a house or a city can be glamorous, but neither can be charismatic.

In closing, Postrel discussed the glamour of California: images of celebrities on red carpets, of the ocean, of youth, of invention and inventiveness. Glamorous early 20th-century images of California lured the architect Richard Neutra to the state from Europe. He in turn created a new image of the good life (with assistance from the photographer Julius Shulman). “The glamour of California attracted him, shaped his life, and in shaping his life helped shape a new version of California,” said Postrel. 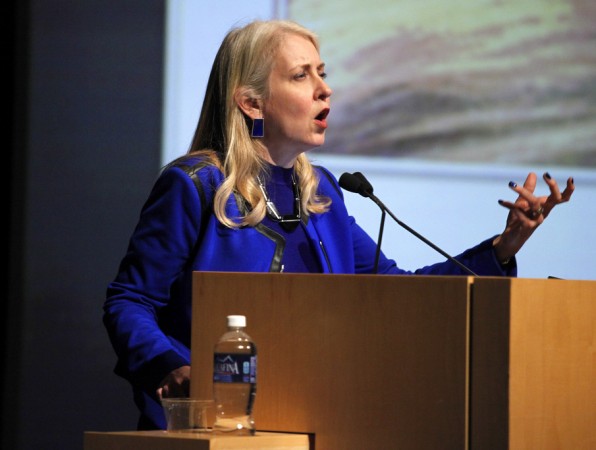 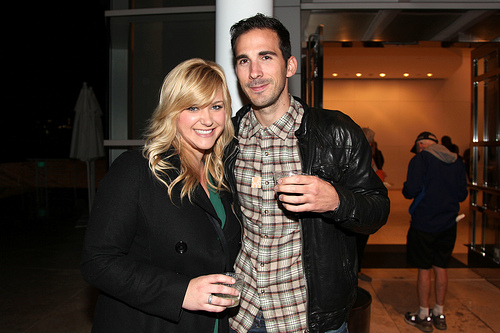 Audience members at one of L.A.’s more glamorous venues, the Getty Center 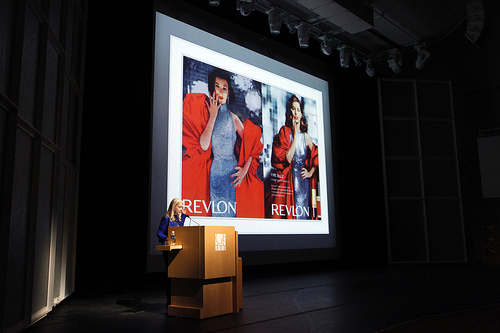 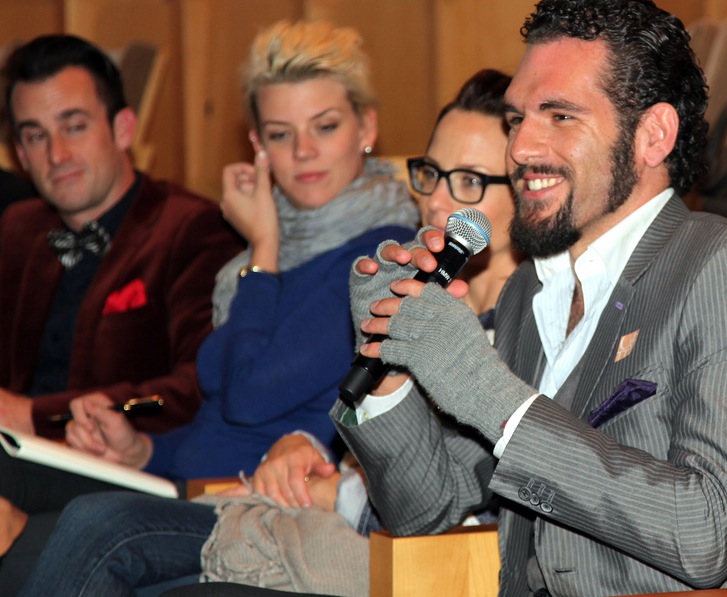 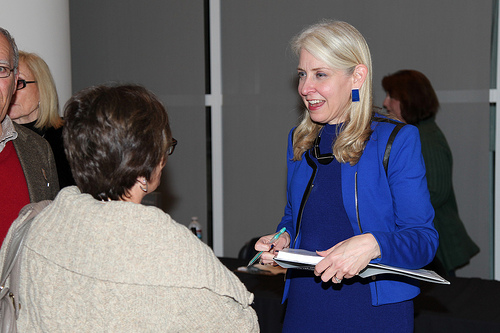 Postrel talks with an audience member at the reception 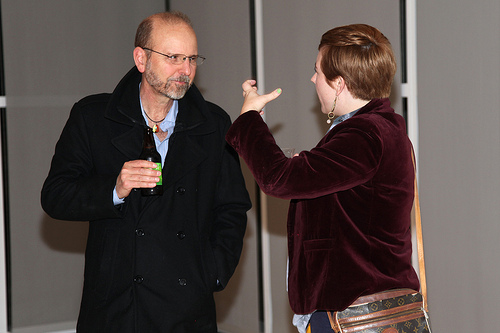