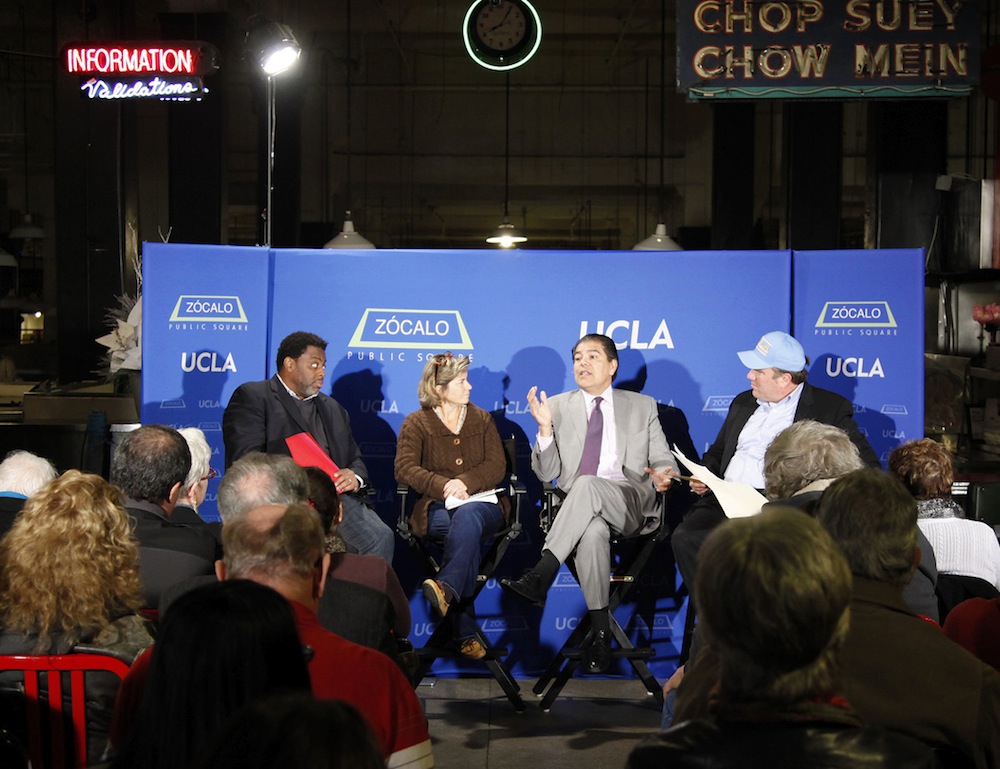 So few Angelenos voted this year that Eric Garcetti was elected mayor with just 222,300 votes—the same number it took to get elected mayor in the 1930s, when L.A. was half its present size. At a “Thinking L.A.” event co-presented with UCLA, local political experts talked about why Angelenos are so reluctant to go to the polls, whether it matters, and what might change things.

Zócalo California editor Joe Mathews, the panel’s moderator, opened the conversation with data to demonstrate the underrepresentation of the L.A. electorate. Demographically, our voter turnout lags 33 years behind the composition of our population. In 2013, the city is roughly 50 percent Latino, but the voting population was a little less than 25 percent Latino—the same percentage as the 1980 U.S. Census.

How do you get people to come out for an election? Panelist Tracy Zeluff of GroundWorks Campaigns, a veteran L.A. labor and political operative, said the key is to attack on all fronts. You send people mail, you call them on the phone, you show up at their door, you use social media, and you put ads on the radio and television. “The best way to engage people is to really have a cacophony,” she said. But ultimately, she’s “a true believer in the human touch”—building a relationship through person-to-person conversation by phone or by knocking on doors. In L.A., the transient population can make phone contact more difficult. But while we think of the city as dispersed, it’s still much more dense than most parts of America, particularly rural areas, where organizers have to drive from door to door and contend with long driveways.

Zeluff doesn’t attribute low voter turnout to anything particular about L.A.’s demographics, culture, or geography. Her theory is that more people than ever before are struggling, and when you’re in survival mode—working multiple jobs, trying to pay for a car and healthcare—it’s hard to keep the big picture in mind. In addition, “there’s a cyclical, ongoing, sometimes purposeful disenfranchisement.” People pour energy into a campaign—like Barack Obama’s—hoping for change, and when it doesn’t reach their expectations, they get cynical, and they stop showing up.

But UCLA Luskin School of Public Affairs Dean Franklin D. Gilliam, Jr. said that a conversation about L.A.’s apathy must have historical context. This is a city with a reform government: high-interest and low-interest races don’t share a ballot, a weak mayor is paired with a strong city council, and nonpartisan elections keep political parties out. However, “in our attempt to keep corruption out of politics, what we’ve also managed to do is keep the electorate out of politics,” he said.

Participation also spikes in Los Angeles when there’s a contest for power between groups. The 2013 mayoral election saw two “moderately liberal white candidates,” said Gilliam; in the past, turnout has spiked when ethnic groups have battled each other, like the James Hahn-vs.-Antonio Villaraigosa and Tom Bradley-vs.-Sam Yorty races.

“When there is still a contestation between groups,” said Gilliam, “everybody shows up because they think they have a chance.”

Political scientist Fernando Guerra, who directs the Center for the Study of Los Angeles at Loyola Marymount University, has studied the attitude of Angelenos toward their city for decades. Recently, he’s found that while people feel better about race relations, they’re not optimistic about the city’s future. Mathews asked Guerra if this pessimism is behind low voter turnouts.

Guerra said that there are two grand theories about why people don’t vote. One is that they’re so disaffected they think they can’t make a difference. The other is that they’re not disaffected enough, and, since they’re generally OK with the status quo, they feel they don’t need to vote. That said, in 95 percent of elections, an increase in voter turnout doesn’t make a difference. Only in close elections—like the 2000 presidential race—is turnout an issue. And voter turnout makes a greater difference in local elections than in state or federal contests. This year, even with a vastly increased turnout, Eric Garcetti still would have been elected mayor, Guerra’s projections found. However, in two city council campaigns, a greater turnout would have changed the results.

We know how to increase voter turnout, said Guerra: “I could, tomorrow, double the turnout by simply changing the election to the presidential election.” But getting attention for a lower-level campaign is difficult; people know less about local candidates and may even stop voting as a result of “ballot fatigue.”

The quality of precincts is also an issue in L.A. At one Westside precinct, said Guerra—who runs exit polls as well as precinct quality checks—there’s valet parking and croissants while people wait. At other precincts, he’s seen “Beware of Dog” signs and dogs loose on the property. L.A. elementary school principals also have the power to decide whether their schools serve as polling places or not—which seems arbitrary.

Gilliam said that there are many things that can be done to increase turnout—from online and same-day registration to polling place regularity. But “people don’t got to the polls to flip a coin,” he said. You need a real election, good candidates, and strong campaigns for people to show up—which, he said, were missing from this past mayoral election. And even if we get another 5 or 10 percent of voters to come out, what will happen? Is it all, he asked, much ado about nothing?

No, said Guerra. Right now, it’s too difficult for people who are fed up to vote. Yes, almost all the time, the candidate we expect to win will win. But once in a while—2 or 3 percent of the time—we should be able to make the surprise victory happen.

Gilliam conceded that the thing to be concerned about is getting the poorest voters out and connected to government. Zeluff added that engaging young people, working-class people, and people of color is critical—although she added that voting is not the be-all and end-all of political engagement.

As the panel neared its end, Gilliam and Guerra returned to the most recent mayoral race. Gilliam said that nonpartisan elections make all the candidates run for the middle. He offered his respect for Mayor Eric Garcetti and his opponent, former City Controller Wendy Greuel. But Gilliam said that neither is progressive. Does L.A. deserve better? Could someone like New York Mayor-elect Bill de Blasio win here?

Guerra countered that Garcetti has the education, the experience, and the background—all the formal credentials—to be mayor of L.A. Greuel, too, shares these qualifications. Guerra said that one of the greatest things he saw in this election was a white woman from the Valley campaigning comfortably in South Central L.A. and East L.A. Although the voting was ultimately racially polarized, such tension was absent from the campaign. 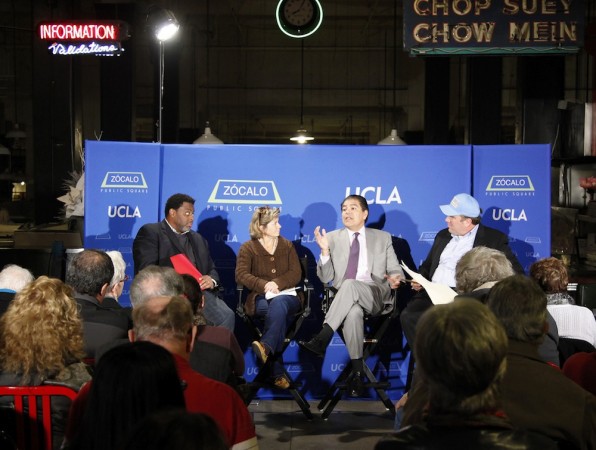 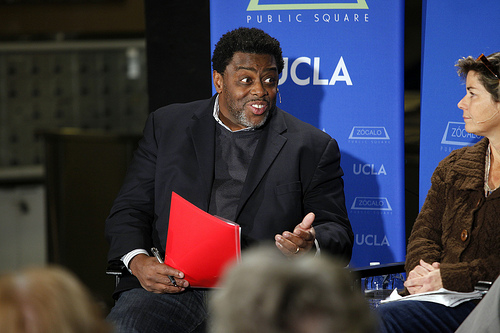 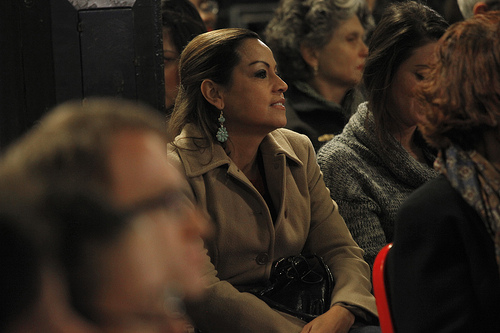 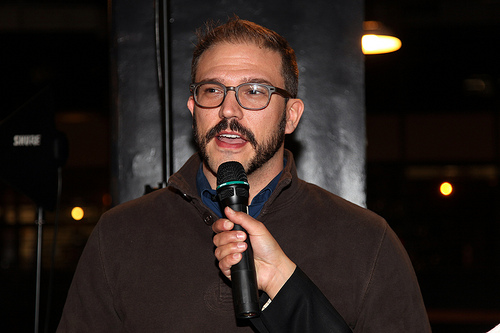 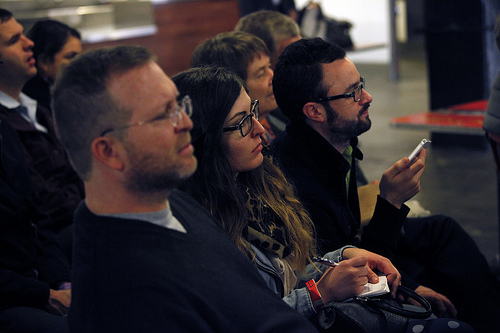 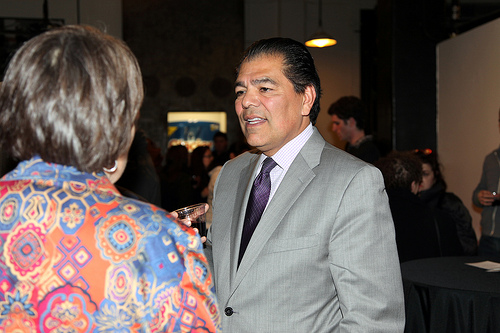