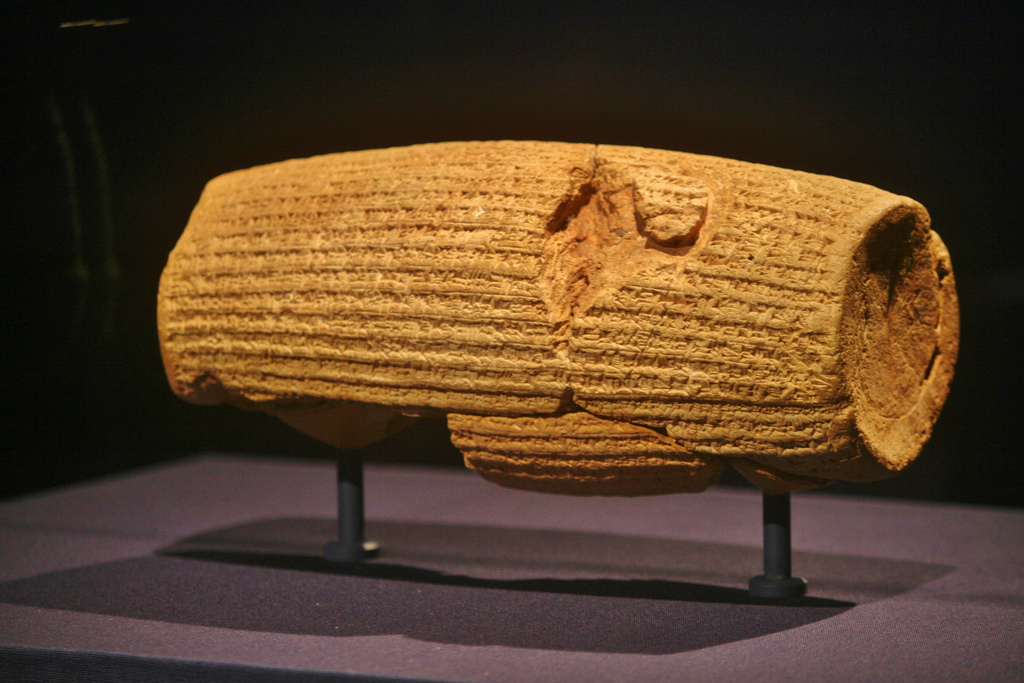 Iranians have a strong love for their country and sense of pride in their heritage and more than 2,500 years of recorded history. Parents instill these feelings in their children at an early age, by reading aloud books and stories about Iranian history. I can recall family members reading to me from big picture books with full-color illustrations of great kings and soldiers expanding their empires. Later, in elementary and high school in Iran, I studied textbooks and also learned our literary history through the poems and novels of great Persian writers.

One king always stood taller than the others, revered as the most benevolent and compassionate of Iran’s leaders: Cyrus, the great king of the Achaemenid dynasty. As every schoolchild in Iran can tell you, Cyrus established the first great Persian Empire, which covered most of what is now the Middle East. In 539 BC, he conquered Babylon and freed the slaves captured from around Babylonia. He also allowed displaced Jewish people to return to their homeland and established a tolerant society that was multicultural, multi-faith, and multilingual.

Cyrus the Great was in power from 559 BC to 530 BC, and was the first king of Achaemenid dynasty that lasted about 200 years. Even after Alexander the Great invaded the Persian Empire, Cyrus’ principles of governance lived on. His dictums and decrees influenced Thomas Jefferson in his drafting of the U.S. Constitution. European political thinkers in the 18th century Enlightenment were aware of Cyrus’s ideas; many of those ideas became central tenets in constructing civil societies—in particular, tolerance for human rights and diversity.

As was the custom in the ancient Near East, many of Cyrus’s proclamations were written down on barrel-shaped, clay cylinders. They were distributed around the Achaemenid Empire, but were eventually dispersed and lost. In 1879, a cylinder that was about the size of a corncob—9 inches long and 2.5 inches in diameter—and covered in ancient cuneiform script was discovered in present-day Iraq and added to the British Museum’s permanent collection. A replica of the Cyrus Cylinder is displayed at the United Nations headquarters in New York.

As a child growing up in Iran, I had no knowledge of the Cyrus Cylinder. Though its text was translated into Farsi decades ago, its existence was not well-publicized.

The Cylinder is now near the end of a five-city tour of the United States through a collaboration of the Iran Heritage Foundation, the British Museum, and the Smithsonian’s Freer Sackler Gallery. My family and I were very excited to hear that the Cylinder would be in San Francisco and were geared up to travel for a close look at this symbol of our heritage. Then we learned we would have the opportunity to visit it closer to home, at the Getty Villa in Malibu. Los Angeles was a good choice to exhibit the Cylinder—so many Iranian immigrants have made the city their home in the past three decades that it’s sometimes referred to as Tehrangeles.

Tickets to the Getty Villa were sold out for many days, but we finally got four so that my husband and I could go with another couple. Many people I know went with much bigger groups, taking their very young children so they could pass on the same legacy that we were brought up with.

Seeing the Cylinder was quite an experience; the galleries were packed with fellow Iranians, young and old. While the exhibition had other ancient Iranian artifacts on display, the Cylinder was the star attraction. As I entered the dimly lit room, I was drawn to the illuminated glass case at the center. When I took an up-close look at this object with its cuneiform writing, I was awestruck—not by its artistry, but by its message. Iranian visitors flocked around the showcase, taking pictures from every conceivable angle. We wanted to document our deep connection to this iconic object and to the impressive history of our home country. Many people became somewhat emotional while looking at it. But my emotions were mixed. I was happy, as if I were meeting ancestors who made me hold my head up high with pride—and sad, too, for the collapse of such an advanced society and for its inability to sustain itself.

Though it is a small object, the Cylinder provided us with a precious, deep, and valuable declaration of humanity and justice that can guide Iranians for centuries to come. I found myself marveling at the foresight of Cyrus the Great. His vision more than 25 centuries ago was unique at a time when most regions of the world were under autocratic, totalitarian, and tyrannical rule, and there was so little consciousness about human rights.

Today, in the 21st century, the struggle to live up to the aspirations of the Cyrus Cylinder continues in every society, with varying degrees of success. It is refreshing to see an iconic symbol of ancient Persian civilization receiving so much media attention. The exhibition is educational for all of us, including those who see the Cylinder as a token of our proud heritage. It also makes me ponder why a great nation with an advanced rule of law was unable to sustain its empire. It’s disappointing to me that a nation as powerful and enlightened as the Great Persian Empire could revert back to autocratic systems and deprive its people of their basic human rights. It seems we still have something to learn from a humble clay cylinder that stands for so many important things.