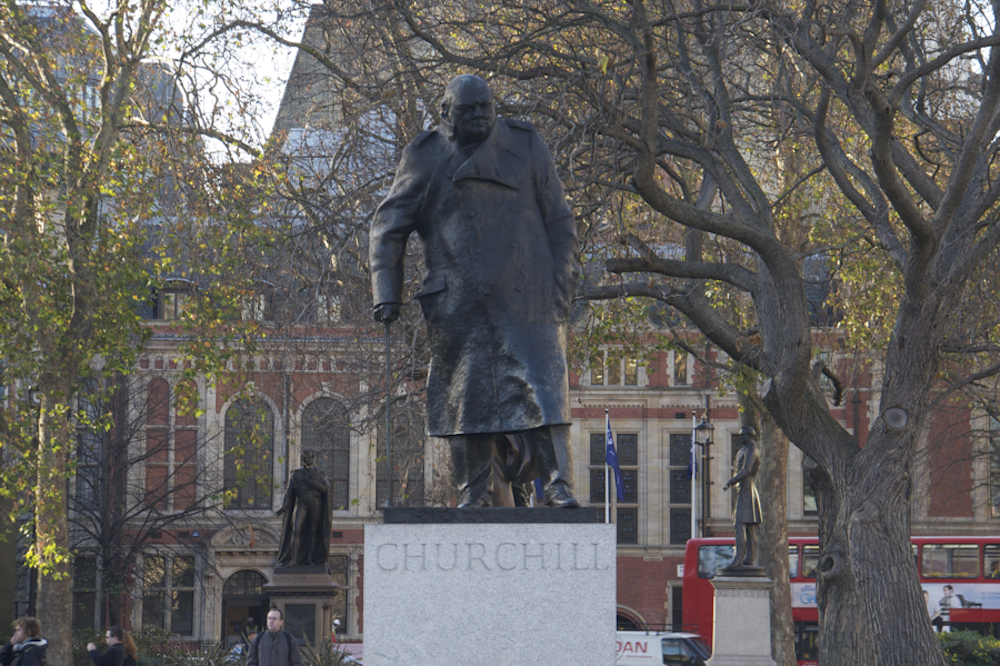 Why on earth am I setting out to write a book about Winston Churchill and George Orwell? What more is there to say? There have been thousands of books written about Churchill, and Orwell seems to grow more popular every year.

The answer is there is a lot more to be said, I hope, when both the lives, works, and times of these two Englishmen are considered at once, illuminating each other.

Winston Churchill and George Orwell were, in the formulation of the historian Simon Schama, “the architects of their time.” Together in the mid-20th century they led the way, politically and intellectually, in responding to the twin totalitarian threats of fascism and communism, and helping carve out a space in which liberal democracy could survive. Ironically, the system they helped save, which favors individual thinking and innovation, has gone on to devise just the sort of all-seeing surveillance system of “telescreens” that Orwell portrayed in his dystopian vision of the future, 1984.

So I think it is time to revisit first principles. Who were these men, what arguments did they use in preserving a space for the individual in modern life, and how did they make them? Those are the questions I intend to address over the next two or three years as I write what I am tentatively calling Churchill, Orwell and the Making of the 20th Century.

The two men were in many ways opposites. Churchill was a Tory aristocrat determined to preserve the British Empire. Orwell was a son of the middle class who served the Empire, then turned against it and became a socialist. Churchill was a champagne-loving bon vivant who despite his voluptuous ways lived nine decades, Orwell a self-denying ascetic who perished before the age of 50. One favored pale pink silk underwear, the other characteristically appeared in baggy corduroys, a tweed jacket, and unpolished shoes. The politician was a great orator, the writer an awkward speaker with a reedy, damaged voice. One led his nation to victory in World War II, while the other more or less sat it out as an invalid. And while they were contemporaries for decades in a nation with a tiny elite, there is no record of their actually meeting.

Despite those differences, they agreed on the most important question of their time: how to respond to fascism and communism. Churchill played the greatest role in the West in defeating the former, while Orwell was the intellectual leader of the West’s response to the latter. It was Orwell who coined the phrase “the Cold War.” Orwell was arguably the most important writer of his era, Churchill the 20th century’s most significant political leader.

And on closer examination, the two have unexpected and illuminating similarities. Both had foreign mothers—Orwell’s was French and Churchill’s American—backgrounds that gave each a bit of an outsider’s perspective in xenophobic early-20th-century England. Neither attended a university. Instead, both grew to manhood in distant outposts of the British Empire. Both men worked as war correspondents of a sort, while young, and both joined their fights as well as covered them. Both were masters of the English language, but in very different ways: Churchill’s style is grand, anachronistically ponderous at times, while Orwell’s is sparse and clear. His anti-heroic style feels remarkably modern even today, six decades after his death.

Most importantly, both men possessed political foresight: In the 1930s, both saw that war with Germany was coming, and probably within a few years. Then, as Churchill moved toward victory in World War II, Orwell wrote Animal Farm, the first of the two novels that helped define his time. When Orwell wrote his masterpiece, 1984, he named his hero “Winston”—at a time when Churchill was the only British political leader often referred to by the public by his first name. Not surprisingly, 1984 was a book that Churchill admired deeply and read twice.

It’s worth lingering on the 1930s, a time of lengthening shadows across Europe. War was spreading in Asia and brewing in the West. Many people, especially the young and engaged, thought that liberal democracy was failing, and that there were only two choices available for the way forward: fascism or communism, the dynamic new ideologies beckoning from Berlin and Moscow. In the 1930s, the best and brightest, wrote the poet Stephen Spender, believed they were “about the end of Western civilization.”

Orwell and Churchill, each in his own way, insisted that there was a third way available. Churchill provided the leadership that preserved England when it stood alone against the Nazis. In the summer of 1940, England was a beleaguered island, literally and metaphorically, with barely an army left to its name. The British order of battle from that time reflects how much gear had been abandoned on the beaches of Belgium and France: The British army stood almost naked, possessing only a few hundred first-rate tanks and artillery pieces, about what one modern U.S. Army division fields today. But England had Churchill, and, as the collapse of France would demonstrate in June 1940, having him at the helm was more important than possessing a thousand tanks.

George Orwell, a far different man, a few years later wrote the books that helped rally the West in responding to Soviet-led communism. Together, they showed that there was a genuine and even better alternative to the totalitarianisms of left or right. He and Churchill did not make the prosperous liberal post-war world—with its sustained economic boom, its huge technological leaps, and its steady expansion of the franchise and citizenship to previously marginalized minorities—but together their efforts helped establish the physical and intellectual conditions that made that world possible.

Both men, I should hasten to add, were also terribly wrong about many things. Churchill likely was wrong more often that he was right—about Ireland, about India, about strategy in both world wars. Yet it was his persistence and determination, so evident in his many errors, that proved critical when he carried his nation, and the future of the West, on his shoulders in 1940.

Orwell is a less appealing person, a glum man who celebrated the proletariat yet complained that the working class smelled bad, who prayed for a socialist revolution during World War II, and who assumed that capitalism was doomed. Yet he also saw the essential point that England and its democratic traditions were worth defending. That was not a given, coming at a time when many of his comrades on the left were not sure. Later, at a time when almost no one would criticize the USSR, he wrote the scathing satire Animal Farm, portraying Stalin as a bullying pig, and found almost no one interested in publishing it.

They were also very different as observers. Churchill’s subject is himself. He was a public man, with a life lived in the forum. He brought the public realm into areas that usually are private, often working from his bed, and sometimes even from his bathtub. The core theme of his writings is his experience of British power, within the limitations of the British tradition.

George Orwell was a private man, not even known to the public by his real name, Eric Blair. His core theme is the abuse of power—by himself as a young British policeman in Burma, by Stalinists in Spain, by the pigs of Animal Farm, and finally by the state in 1984. That last book is a sustained plea to preserve some private space in the modern world, especially from the unrelenting reach of the state. “We live in an age in which the autonomous individual is ceasing to exist,” he wrote in June 1941. In his personal life he also pursued this quest. In his last years he moved for part of the year from London to a hermetic existence at the roadless northern end of Jura, in Scotland’s remote Inner Hebrides islands. Even while taking refuge there, he packed a pistol out of the concern, not unreasonable, that Stalin’s agents might try to kill him, as they had Trotsky and other defectors and anti-Stalinists outside Russia in the preceding years. For Orwell, the more modern of the two men, the task of the writer was simply to observe the facts of the matter—itself difficult enough to do when modern political trends ran against such impartial recording. As he wrote in 1946, “To see what is in front of one’s nose needs constant struggle.”

Ultimately both men focused on the value of the individual in the world, and all that means: the right to dissent from the majority and even the right to be persistently wrong. “If liberty means anything at all,” Orwell wrote, “it means the right to tell people what they do not want to hear.”

Likewise, on September 3, 1939, as British participation in World War II began, Churchill (who was not yet prime minister) stated, “We are fighting to save the whole world from the pestilence of Nazi tyranny and in defence of all that is most sacred to man. This is no war for domination or imperial aggrandisement or material gain; no war to shut any country out of its sunlight and means of progress. It is a war, viewed in its inherent quality, to establish, on impregnable rocks, the rights of the individual, and it is a war to establish and revive the stature of man.”

Both men emerged from the war somewhat broken. Orwell’s deterioration was more evident than Churchill’s. Orwell, his lungs damaged, and his throat recovering from a bullet wound suffered in the Spanish Civil War, worked steadily, smoking all the while his health declined. Churchill, also ill, was voted out of office even before World War II had ended—after the surrender of Germany but before the final victory against Japan.

The last piece of writing Orwell completed, auspiciously enough for my project, was a review of Churchill’s Finest Hour. “Whether or not 1940 was anyone else’s finest hour, it was certainly Churchill’s,” he wrote. “However much one may disagree with him, however thankful one may be that he and his party did not win the 1945 election, one has to admire in him not only his courage but also a certain largeness and geniality.”

Churchill’s reputation was huge in the wake of the war, then declined in the 1960s and 1970s, and now seems to have recovered. Orwell’s stature has continued to grow steadily. As late as 1963, Stephen Spender could dismiss him as a fine prose stylist but still a minor figure of little or no impact. Few writers would estimate Orwell so low today. Neoconservatives bear-hug him with phrases such as “the most important writer of the 20th century.” Christopher Hitchens went even farther, asserting, “He owns the 20th century, as a writer about fascism and communism and imperialism, in a way that no other writer in English can claim.”

I wouldn’t go that far. I think he co-owns it with Winston, after whom he named his most famous protagonist.