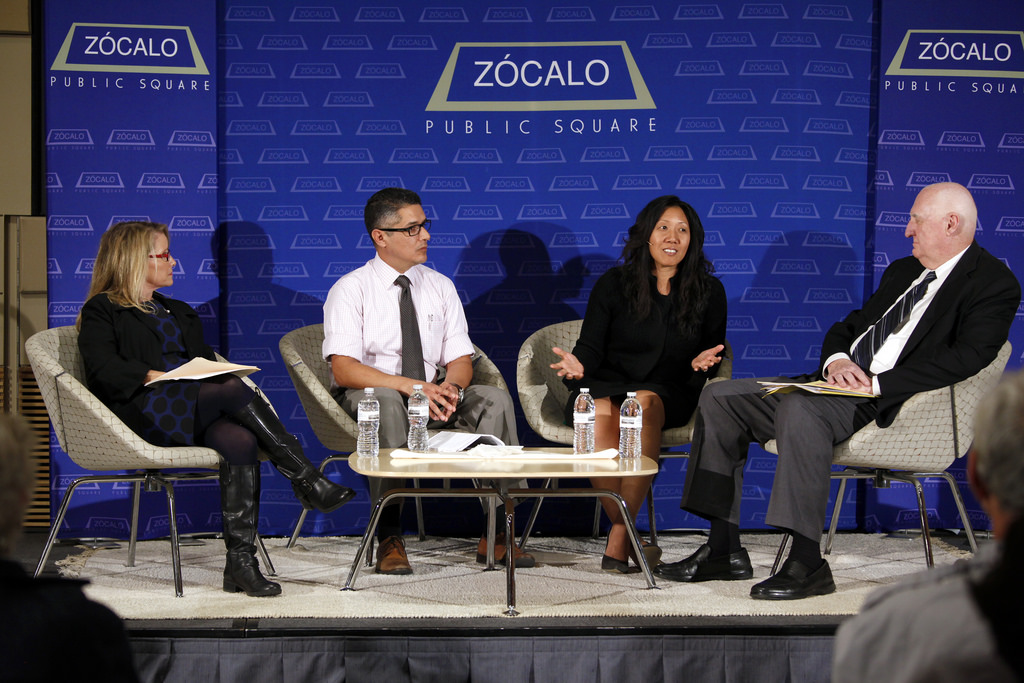 The way discipline is enforced in American schools is changing quickly, explained Beth Shuster, Los Angeles Times education editor, at an event co-presented by the California Endowment. Zero-tolerance policies—which mandate suspensions and expulsions for a wide range of infractions—are being replaced by “restorative justice” programs that encourage student responsibility and empathy. But there’s still a long way to go. Black boys are three times more likely than their white peers to be suspended or expelled. The state of California issues more suspensions than diplomas each year. And the correlation between suspensions and dropouts remains high. It’s an issue that troubles lots of Californians, as indicated by the size of the crowd—standing room only—at the Endowment’s downtown L.A. headquarters.

One local change is that the L.A. Unified School District (LAUSD) has become the first district in the state to stop suspending students for “willful defiance.” Turning to Carlos Castillo, a social studies teacher at Roosevelt High School in the Boyle Heights neighborhood who also coordinates the school’s Teen Court, Shuster asked how willful defiance plays out in his classroom.

Castillo said that willful defiance is entirely subjective. “Not only is it something that each teacher has a different definition of—it’s something each teacher has a different reaction to,” he said. If a teacher comes from a certain background, class, or ethnicity, he or she is going to see certain actions, like a student refusing to take off a hooded sweatshirt, in a different context. To Castillo, it was “ridiculous” that willful defiance was the number-one infraction behind LAUSD suspensions. “You’ll always have students testing the boundaries,” he said. “That’s what high school students do.”

Maisie Chin, co-founder of South L.A.’s CADRE parents’ organization, said that willful defiance can be especially difficult on parents. They might not know exactly why their children have gotten in trouble. And they also have to contend with their child getting a reputation for misbehavior. “It can lead to a spiraling negative perception,” she said—and teachers and administrators might extend that perception to the family rather than working together to figure out the root cause of a student’s behavioral problems.

Walt Buster, the founding director of the Central Valley Educational Leadership Institute and a longtime superintendent and teacher, said that deep, ongoing, collaborative conversations are needed to change the disciplinary culture in schools. While it’s true that policies are changing, principals need to communicate those changes to teachers and parents alike. Teachers might disagree with new discipline strategies, but if school leaders create a dialogue, teachers are more likely accept and adapt to the changes.

Castillo added that he’s frustrated by a disconnect between teacher innovation in the classroom and traditional, antiquated disciplinary methods, but he’s inspired by some of the creativity he’s seen. At his school’s Teen Court, students serve as jurors of their peers and have the opportunity to suggest alternative forms of discipline. One particularly successful program is called SHADES: Stopping Hate and Delinquency by Empowering Students. Students who bully with prejudice or bias are sent to a camp where they get instruction on building bridges and working to get along. A lot of adults would say that camp is a reward rather than a punishment. But Castillo said that we need to remember that these are young people who are still learning—who deserve opportunities to learn from their mistakes.

Parents, said Chin, should also not be locked out of the discipline process. It’s not just about getting a parent to comply with what a teacher needs, she said: “Even if you create a table to sit at, it’s usually a top-down, condescending experience.” Rather, there needs to be a long-term conversation about a child’s development—and some power-sharing on the part of teachers.

No teacher, said Buster, goes to school saying, “‘I’m going to hurt kids today.’” But the perception remains that schools need to be tough on kids, even though, under zero-tolerance policies, test scores went down and schools got less safe.

Shuster said that while working on a series of articles about school dropouts, she was struck by the number of students who said that no adult seemed to care whether they showed up or not. When you have teachers with huge classes and counselors who are swamped and overwhelmed, how do you forge relationships between adults and these kids?

Chin said that at its heart this is a human rights issue: Too many teachers, administrators, and schools don’t want to connect fully with their students and communities. And in our evidence-based education world, no one wants to talk about this crisis.

Castillo said that Roosevelt High and many other schools have instituted an extended homeroom—called “advisory”—where a teacher is assigned a group of students as ninth graders and works with the same class over four years. The teachers are meant to get to know these students deeply and to check in about grades and attendance as well as issues within and beyond school walls. Many teachers aren’t trained to do this in the classroom, so it hasn’t worked perfectly, but Castillo sees a great deal of potential. 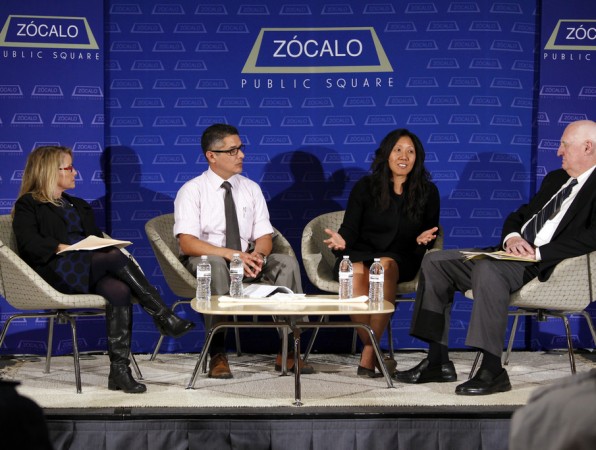 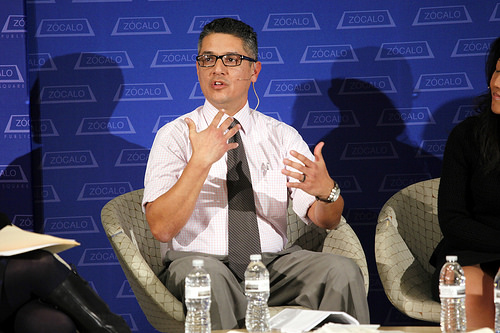 Carlos Castillo, a social studies teacher at Roosevelt High School in L.A., talked about his experiences in the classroom and coordinating the school’s Teen Court 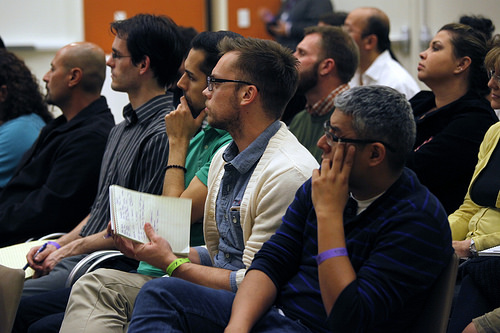 It was a standing-room-only crowd at the California Endowment 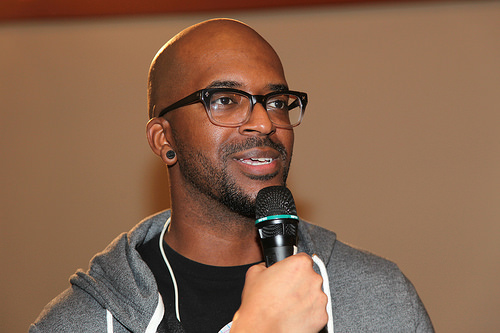 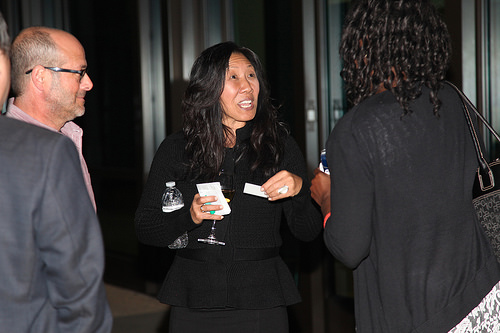 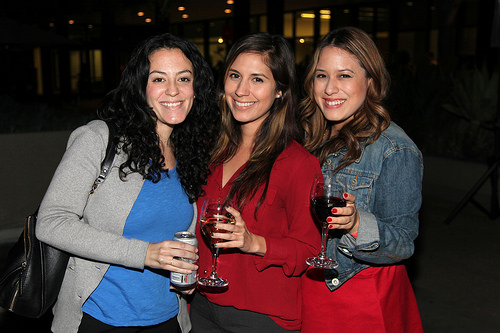