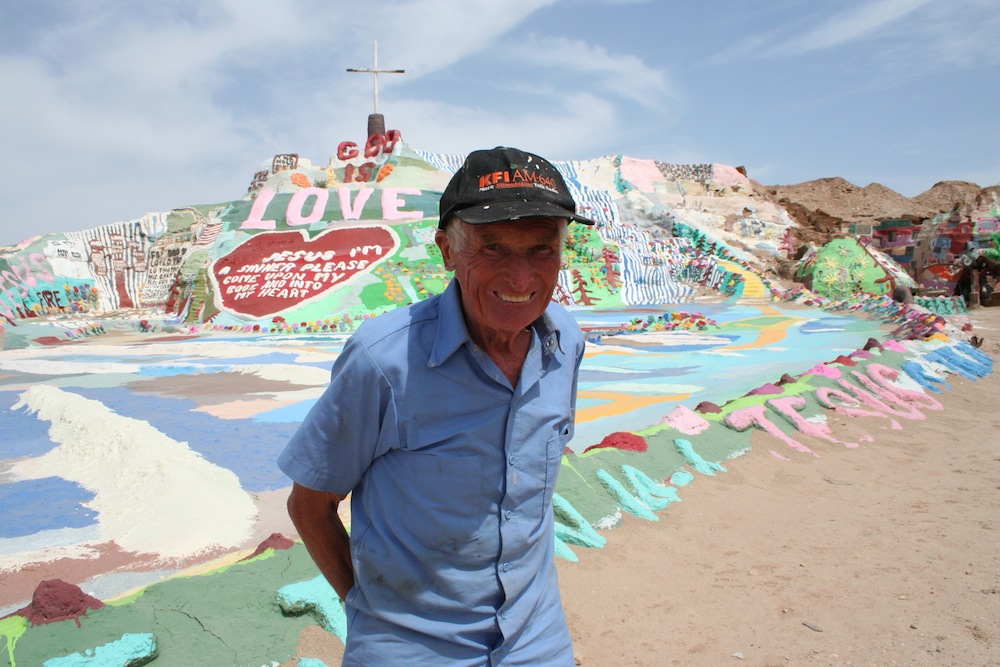 In 1984, Leonard Knight started building a mountain to proclaim his love of God on a strip of desert near Niland, California, on the east side of the Salton Sea. It began modestly with 500 bales of straw.

Over the years he transformed his mountain into a 50-foot edifice, topped with a cross and the phrase “GOD IS LOVE.” The words “Jesus I’m a sinner please come upon my body and into my heart,” which Leonard called The Sinner’s Prayer, appeared on the mountain in huge letters. Molded across its flank in Candy Land colors were pine trees, trickling streams, an American flag, and phrases Leonard plucked from the Bible and simplified for his visual style of preaching.

The paint didn’t stop with the mountain; he painted along the mountain’s base to create oceans, rivers, stripes, and flowers. Like his preaching, the paint was applied anywhere it might stick—onto a truck, a skip loader, a stray piece of metal. The story of his salvation was primed for visitors, and he told it readily as he stood unfazed in the desert sun.

We pulled up on Easter 2007 in a gold Chevy HHR rental car onto which we had slapped a magnetic sign (found by the side of the road) advertising a Palm Springs window-washing business. Our mission was to travel the long-forgotten Ocean-to-Ocean Highway on the east side of the Salton Sea to document roadside oddities—date shake cafes, an abandoned yacht club, and a new age pyramid claiming to be the center of the world—along the way. Leonard and his mountain were top-billed, and those in the know had told us that we should arrive bearing a can of paint. 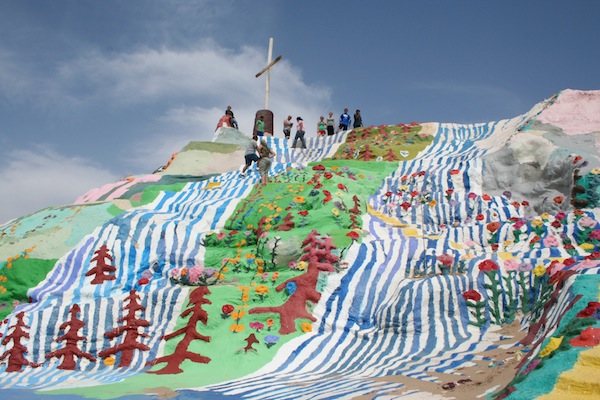 Leonard—tall and thin, with sun-bleached hair and white teeth—greeted us even as his elbow streamed blood from some mountain-building mishap. His work clothes were clean though he slept in a camper truck on-site.

We competed for his attention as waves of small groups arrived to tour the huge painted mound he called Salvation Mountain. Hard of hearing at the age of 75, Leonard managed the crowd with a grin and a string of ready-made pleasantries: “Golly!” “When did you say you were last here?” “If you have time, I’d like to show you this!” “Well hell-O! You’ve been here before?”

“The wind keeps a-blowing … and I keep a-painting,” Leonard told us.

Born in 1931, in Shelburne Falls, Vermont, he served in the Korean War and, following an honorable discharge, worked in an auto-body shop painting crumpled cars. At one point, he gave Western-style guitar lessons, claiming to have taught 60 students per week. Then in 1967, while visiting his sister in San Diego, he opened himself to God and was converted.

“I was 30 years old,” he told us as we stood together at the foot of the mountain. “I didn’t love God, but my sister was always forcing me to go to church. I stood outside her house and said ‘Jesus I’m a sinner. Come into my heart’ over and over. Suddenly, tears are coming down my face. It was a real conversion—changed me totally right then.” 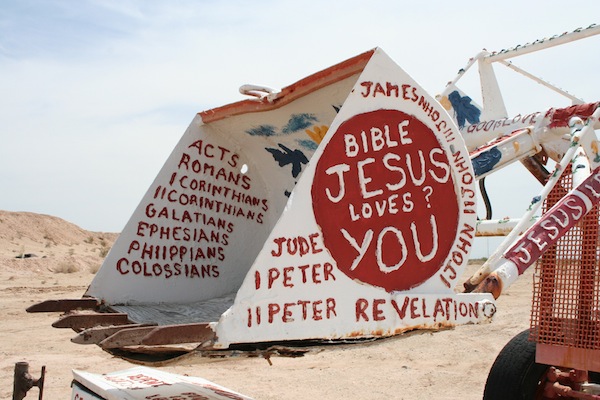 He prayed 10 years for a balloon. Then, on a trip west, he was stuck in Nebraska for a few days waiting for a car repair. God spoke to him and told him to make the balloon himself. He stayed in Nebraska three years, using two sewing machines to stitch odd scraps of colorful fabric together, eventually creating a balloon that proclaimed “God is Love” in red letters.

One story of how he ended up in Niland is that the balloon crashed there; another is that he found Slab City, a free-for-all snowbird camp nearby, and decided to stay. “The plan was to stay one week,” he told us, then grinned. “My plan got ruined.”

With the need to proclaim God’s love gnawing away at him, Leonard started constructing a monument. Found materials were to him gifts from God meant for a big purpose. First some tires, then cement, pieces of junk, some paint … and the mountain started growing.

This first mountain, more vertically oriented and made with cement, collapsed of its own weight in the late 1980s. Leonard decided to rebuild it out of native soil, using those bales of straw to strengthen the mud. He covered it with more paint—hundreds of thousands of gallons brought by those who heard about the mountain. And it was this paint that brought the attention of the Imperial County Board of Supervisors. The county hired a consultant to test the mountain—and concluded it was a “toxic nightmare” that needed to be demolished.

But this was no ordinary pile of chemicals—it was an oasis for wanderers through the desert. And no one wanted to see Leonard displaced. His growing fans and the residents of Slab City circulated a petition to save Salvation Mountain. There were donations, and testing by an independent firm, which found contaminants within acceptable limits. “The county pulled out like perfect gentleman,” Leonard said.

The day we visited, people roamed on top of the mountain and through a room Leonard had made on the side of the mountain that he called the Hogan. A lone visitor followed a path of bricks painted gold that Leonard had wound around it, telling someone on the other end of a cell phone, “I’m following the yellow brick road right now.” 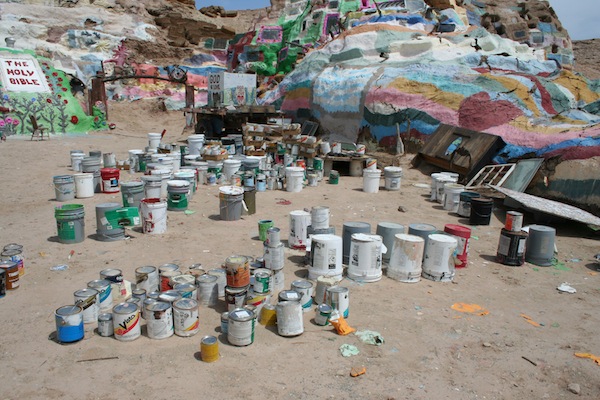 Leonard had become a tour guide at the expense of his work. “Lately I’ve been more gabbing than doing,” he said. Containers of roofing tar, caulk, paint, and tarps were clumped under nearby trees, ready to be put to use. He said he was slowly creating a new section, which he envisioned as “100 high-gloss flowers to hit the sun, with light coming down in rainbows.” Everything was in mid-construction, and nothing was ever quite finished.

He distributed puzzles, postcards of the mountain, and a video he made for senior homes. While handing them over to visitors at no charge, he thanked them for their help in spreading God’s word.

That same year Leonard and the mountain appeared in Sean Penn’s film Into the Wild, and the stream of curiosity seekers grew exponentially.

Leonard was moved to a long-term care facility in El Cajon late in 2011—more than 40 miles from his mountain. His eyes were failing, and one of his legs was amputated due to a blood clot. Updates on his health were posted and “liked” on Facebook, as groups volunteered to maintain the mountain during weekends.

In 2007, we had asked Leonard about the day when he would not be there to look after his Salvation Mountain. His answer was quick and certain: “God built it—he’ll take care of it.”