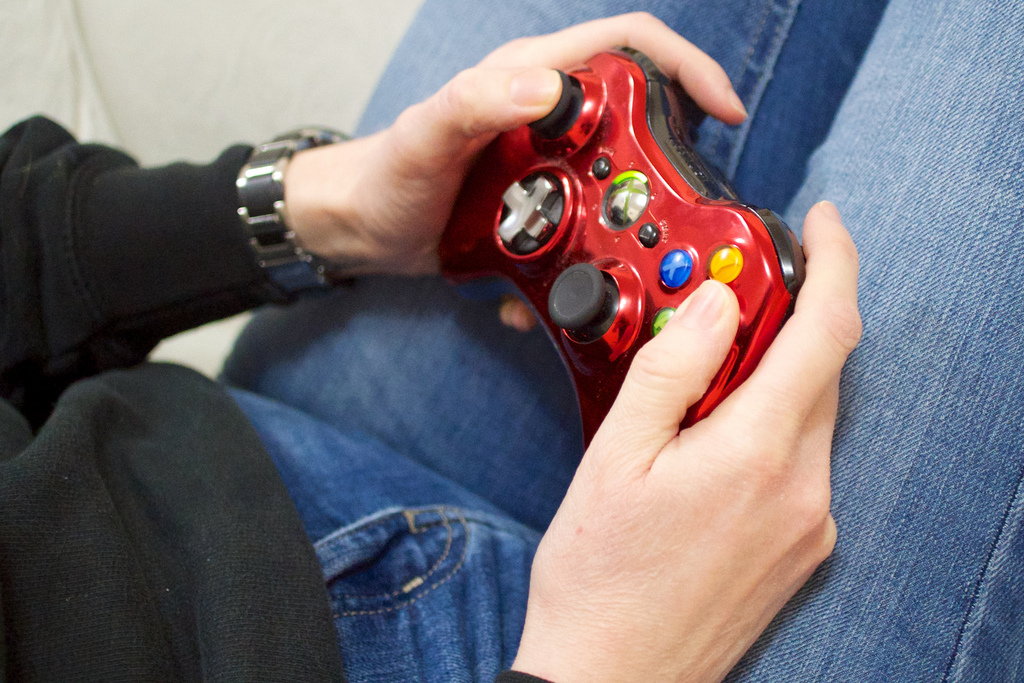 The purchase was so out of character for me that my credit card company wanted no part of it.

“Martinez is buying an Xbox? Sure he is … This’ll be the easiest fraud to identify all year,” someone must have scoffed at Amex’s global command center. Declined!

A few moments later, under the watchful eye of the tattooed sales clerk at GameStop, I was calling Amex to say, “Umm, no, really, it’s me. I know it’s crazy …”

I always vowed my kid wasn’t going to be a video game junkie. Our home was going to be about books, sports, TV (yes, TV), and plenty of games, but the kind you pull off a shelf, open the box, and wonder where the missing dice are. Video games had never captured my imagination beyond a passing infatuation with Pong and fond memories of the Pac-Man console in the pizza place we’d frequent in high school. Gaming was a gateway vice to a life of ruin in my estimation.

So why cave now, decades later, when I am a productive member of society and Sebastian, at age 9, is well on his way to having a healthy relationship with the real world?

Let me offer up three reasons. The first, and most pathetic, is peer pressure. Many of Sebastian’s buddies, and his soon-to-be stepfather, have video game systems, which Sebastian raves about. And so for a while now, I’ve been mulling over the existential question of whether I really want to be the one providing the no-fun home. What’s more, Sebastian already plays a fair amount of games on an iPad. I figured if we could spend that time playing together on the large screen, we’d be engaging in more of a father-son bonding experience.

Second, I’ve had a sneaking suspicion that sidelining myself completely from the video game realm was making me more of a Luddite: A considerable degree of technological and cultural innovation is now taking place in a realm as foreign to me as the inner workings of a NASA spaceship (assuming they still have those).

My third, somewhat related reason, was that I’d read with unease that these game consoles I thought of as dumb had become the smartest media hubs around, connecting your TV to the Internet and streaming services like Amazon Instant Video and Netflix. As someone who’d often cuddled up with my laptop watching downloaded movies in view of my large, darkened TV screen (see, I do have strong Luddite potential), I could see Xbox’s value as the ultimate media concierge.

If all these rationales sound flimsy, akin to the proverbial claims of buying Playboy “for the articles,” let’s just go ahead and blame my brother. Sebastian and I visited him in Dallas earlier this year and were forced to experience the sheer awesomeness of FIFA 14, the blockbuster Electronic Arts soccer game.

This game had nothing in common with Pong and showed little resemblance to Pac-Man. It was like nothing else I had ever seen. Playing for only a few minutes convinced me that this game was, yes, incredibly enjoyable but also extremely challenging. It required both precise eye-hand coordination and an understanding of the sport.

And so it didn’t take long after our return from Dallas for me to walk into GameStop, much to the surprise of both Sebastian (wow, Daddy is fun!) and American Express (no way it’s him buying this).

I am working at mastering FIFA 14 (still the only game we own). It takes a nimble mind and digital dexterity to remember in real time the right controls to make your defenders slide versus tackle versus contain, or to make a player shoot a chip shot versus cross the ball. Heck, sometimes I find it hard to keep track of which player I’m controlling at any given time.

But I’ll get the hang of it. Those awkward moments when my players dash off away from the ball as if to jump into the stands are becoming fewer and farther between, and I feel a remarkable sense of accomplishment when I mount a well-choreographed advance, using an intricate series of commands to march down the field.

I have no doubt that this video version of the game I love—and the game in which I’ve coached my son—helps us to understand the real thing better. There’s nothing like FIFA 14 to convince Sebastian that dribbling the ball on your own from midfield is not the best way to score a goal, or to get him thinking about the value of the well-timed pass into space behind the defenders. (For which you have to hit “Y,” not “A.”)

And the computer’s formidable memory contains the updated rosters of hundreds of teams from around the world. Part of the fun is choosing whether to play a classic rivalry such as Chelsea-Arsenal or Brazil-Argentina, or to be a more creative matchmaker, and host a friendly between such unlikely opponents as St. Petersburg’s Zenit and Mexico’s Toluca, or between teams of different generations. The sounds and sights and atmospherics of each stadium are remarkably authentic, and there’s nothing headier than having two of England’s most famous announcers do the play-by-play on your moves. Which, in my case, leads them to say things like: “Well, that move is an absolute waste under the circumstances.” Or sometimes, more charitably: “Well, that was the right idea, even if the aim wasn’t there.”

Sebastian and I have been playing our own version of a World Cup featuring 16 countries. As part of my guilt at becoming a video game-enabling parent, grasping for some redeeming educational purpose, we first find the countries about to play on a map. We then look up their respective populations and GDP size (today’s takeaway is that there are two-and-a-half Argentines for each Dutchman, but the Dutch are considerably wealthier). And finally, before we hit “start,” we listen to their national anthems. But no, if my kid ends up being both a geek and a nerd, it certainly won’t be my fault.

FIFA 14’s graphics are so realistic and beautiful on the big screen that at times it seems like reality and the game are converging. Watching Real Madrid take on Barcelona last Sunday in what’s arguably the greatest rivalry in all sports, I found myself trying to exercise control over the Barça players. I wanted to tell Messi where to run with my joystick, to press “X” and make Piqué slide when Cristiano Ronaldo approached him with the ball.

And that, I have to admit, was a tad scary.