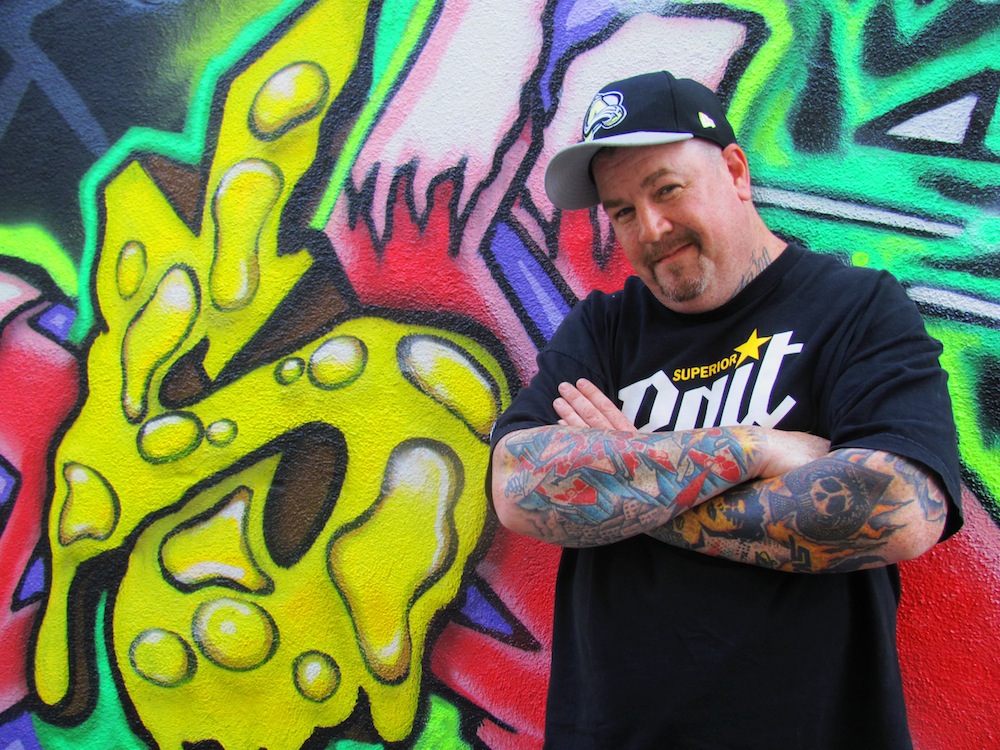 Andrew Yasgar, also known as “Sket One,” used to scale fences at night, watching for cops as he illegally hanged off the side of highways to scrawl his tag on highway bridges. At 16, he “bombed” bridges and walls with Krylon spray paint alongside members of graffiti crews with names like Being Labeled Trouble and If Mother Only Knew.

More than two decades later, Yasgar, now 43, is a father of three. He has changed diapers and read bedtime stories while holding down a full-time job as an art director for a marketing and advertising firm. He still writes on walls, but now he does it legally, getting permission from building owners.

In a subculture that prizes youthful rebellion and derring-do, Yasgar is now one of the veterans. This is graffiti grown up.

Urban graffiti started in the late 1960s with the “paint-bombing” of New York subways by teens. It exploded into the national spotlight in the early 1970s with a New York Times article that featured writer Taki 183, a foot masseur from Washington Heights who was known for tagging all over New York, and spurred competitive vandalism throughout the city. Kids began to write their own signatures everywhere.

As a child growing up in Los Angeles in the 1980s, I was fascinated by the graffiti movement that exploded out of the East Coast and made its way to our streets. My love for hip-hop music took me to parties where DJs, MCs, break dancers, and graffiti writers all congregated, each showcasing their talents. Over the years, I frequented local art shows showcasing writers like Mear One, SANOizm, and Sket One.

When Andrew Yasgar was 13, he studied the intricately stylized graffiti pieces he saw as he rode the New York subways and returned to his quiet New Haven neighborhood inspired to write. His first attempt with spray paint was on his parents’ shed. He took on the signature Sket One. “Sket” was how he shortened the word sketch.

Yasgar and his friends ventured into the streets for their first project a year later. Hitting that first bridge in New Haven in the middle of the night was a well-executed team effort: one guy spray-painted the letter outlines while Yasgar filled in the colors and another guy helped with the shadows behind the letters to create a 3-D effect. The whole thing took about 30 minutes. By the end of the night, Yasgar and his crew left their mark on at least five bridges and highway underpasses.

“At first I was just the lookout, but I tagged what I could,” Yasgar said. “We were so young … just hood rat stuff. But the feeling … the rush … was awesome. It was at that point I knew I wanted to do it.”

By the late 1980s and into the 1990s, as graffiti’s popularity continued to grow worldwide, Yasgar honed his can control and technical skills on walls throughout the Northeast. But penalties for “vandalism” and proposals for anti-graffiti legislation increased around this time. Local governments worried that graffiti made neighborhoods look low-class and neglected. They also worried that graffiti signaled the presence of gangs, even though many taggers were not affiliated with gangs. In Los Angeles, which was once known as the “Mural Capital of the World,” ordinances passed in the early 2000s classified graffiti as murals, and these murals as advertising, and banned them throughout the city.

This didn’t stop the crews, of course. Graffiti and street art grew in popularity, and mega crews such as FX, Diabolical Functions, and The Fantastic Partners appeared. They also grew in legitimacy. Street artists like Shephard Fairey—the guy behind the “Hope” posters during Barack Obama’s 2008 presidential campaign and the OBEY brand—and Banksy—who earned an Oscar nomination in 2010 for his street-art documentary Exit Through the Gift Shop—became household names. L.A.’s Museum of Contemporary Art even held a street art exhibition in 2011, the first major museum exhibition of its kind.

These legal changes coincided with a philosophical maturation among veteran graffiti practitioners. After 25 years of tagging his name illegally on walls throughout Los Angeles, Kalen Ockerman (also known as Mear One) started thinking more politically. His recent mural on a building near the intersection of Santa Monica and Sunset boulevards in Silver Lake’s Sunset Junction features an homage to three people Ockerman believes made the ultimate sacrifices to reveal truths the U.S. government has tried to suppress: Julian Assange, Bradley Manning, and Edward Snowden.

“Part of the rush you get from tagging in the streets, breaking the law, and doing illegal art is gone for me at this stage of my life,” said Ockerman, who is 42. “Tapping into subversive or deep subject matter that’s controversial transcends the daily language—that still gives me the ability to vandalize people’s minds.”

Many taggers have found other careers, including designing clothing lines, creating skateboards and snowboards, and opening shops showcasing the work of their fellow graffiti artists. “You have people who used to be bombers when they were younger, but they are now art professionals, fashion and car designers, and even police officers,” said Ayumi Chisolm, also known as SANOizm, who has his own graphic design and screen-printing business.

Meanwhile, Yasgar, who still sports baggy clothes and has a tattoo of the word Sket on his right arm, has some white hairs in his goatee. When his first child was born in 1996, Yasgar decided to stop illegally tagging. He needed insurance for his family. He got a job at a neon shop and learned about computers and graphic design. In 2000, he got a job with the marketing firm Silverman Group as a graphic designer for advertisements, and he’s a creative director there now. 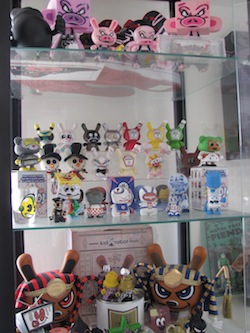 He only stayed away from the spray can for five years. With encouragement from a friend, he started writing again in 2001, but this time on legal walls and with permission. He also connected with the founders of KidRobot, a toy company famous for Dunny or “devil bunny” vinyl figures that now has a line of Sket One Dunnies sold all over the world.

“We all had to grow up at some point,” says Yasgar, sitting in his Long Beach home studio one recent Saturday, where toy models of graffiti-laden freight and subway trains are carefully displayed throughout the space like altars. He was thumbing through old albums filled with pictures of him as a skinny teenager writing on walls.

His new vision is building an indoor learning center modeled after skate parks called “The Base,” where graffiti enthusiasts of all ages can gather. His business plan calls for a large indoor facility where aspiring artists can rent wall space, practice, and take classes from veteran graffiti writers. They can take advantage of the brighter, more durable shades of paint that are available now, and learn the wider array of techniques now possible because of control-nozzle caps that help perfect swoops and letters.

Students’ finished work could be catalogued in video and photos. The facility could include a space for a retail store or food court and an entertainment stage. This place could save cities millions of dollars in anti-graffiti budgets and reduce the amount of illegal tagging that still occurs on streets, buildings, and bridges without permission.

Of course, Yasgar still needs big investors willing to take a chance on the venture. But he’s working on it.

“You can go to schools where you can learn how to paint and draw, but nothing like that really exists for graffiti on a large scale,” he said. “This is how you will grow.”