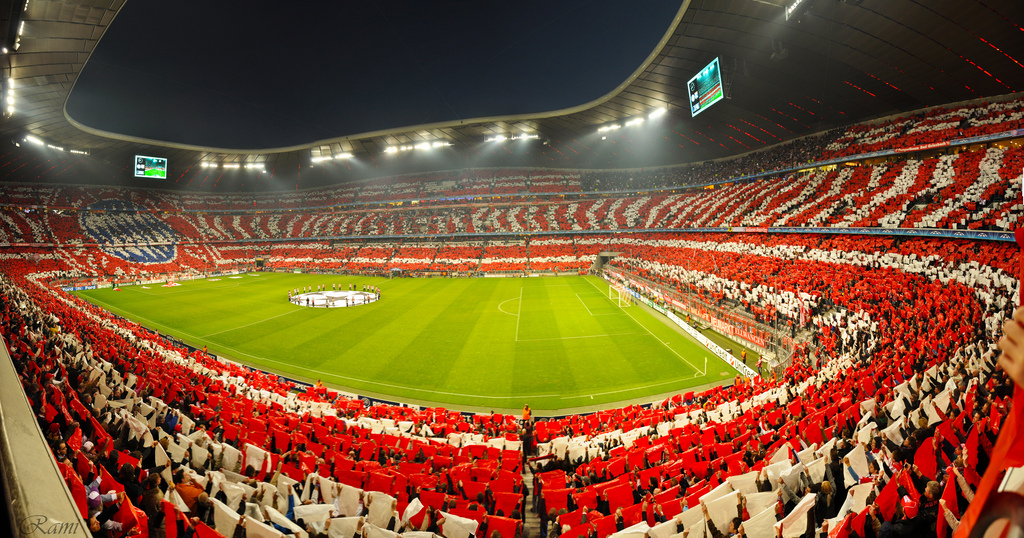 Don’t let Europeans self-righteously lecture you about inequality in America—especially not Germans. If you compare the American and German professional “football” leagues each society considers truly important, you quickly arrive at a startling conclusion: Germans are far more tolerant of inequality than Americans.

Bayern Munich, the perennial powerhouse of the German Bundesliga, is this year’s champion … again. Over 51 seasons, Bayern has won the championship 23 times. This season is still ongoing, mind you, but the Bayern steamroller clinched the title on March 25, with seven games left to go, the earliest any team has mathematically wrapped things up (the Bundesliga, like most domestic leagues in Europe, has no playoffs). Until a 1-0 slipup in early April against lowly Augsburg, Bayern had put together an astonishing streak of 53 unbeaten games in the Bundesliga. The team plays a beautiful synthesis of strong Germanic tactics and more soulful Mediterranean fluidity. Bayern is stacked with the stars of the German national team squad that will go to the World Cup in Brazil, along with Dutch, French, Spanish, and Brazilian stars, all coached by the legendary Pep Guardiola. Opposing German clubs don’t just drool at the talent Bayern lines up in its starting 11; they covet the stellar leftover talent that rides its bench as well. The league’s smaller clubs barely spend one-tenth of what Bayern does on players.

By contrast, America’s National Football League—supposedly putting on a more brutal game in a more cutthroat, winner-take-all society—is a socialistic paradise relentlessly striving for parity. The league has perfected a strict salary cap and a revenue-sharing plan that levels the playing field between teams, regardless of their owners’ wealth or cities’ size. Add in the consoling of weaker teams with softer schedules and higher college draft picks, and it becomes hard to think of another institution, of any type, that has abided as successfully as the NFL has by the old Marxist maxim of “from each according to his ability, to each according to his need.” The system appears designed to encourage all teams to take turns winning the Super Bowl, or at least to make each city’s fans believe they are one or two seasons away from glory.

Back in Europe, it isn’t only the Germans that embrace uneven playing fields. The continent’s major soccer leagues all command global followings and high revenues to be inequitably distributed. Six of the world’s 10 highest-paying sports teams are European soccer clubs, including Bayern, according to an ESPN/SportingIntelligence analysis of average player compensation, with the New York Yankees, Los Angeles Dodgers, Chicago Bulls, and Brooklyn Nets being the other four. European leagues typically feature a small number of rich clubs lording over the rest of the field. Spain’s “La Liga” is essentially a Barcelona-Real Madrid duopoly, with occasional guest appearances by third clubs like Valencia, Sevilla, or, this year, a surging Atlético Madrid. In Britain’s Premier League, the circle of haves dribbling circles around the have-nots is slightly bigger—five or six teams have realistic aspirations at the start of each season.

But in Germany, a country we don’t often associate with crushing inequality, Bayern stands in a league of its own when it comes to talent and resources. A year ago, when fellow Bundesliga squad Borussia Dortmund met Bayern in the European Champions League final (the super-league where the top clubs from each country play each other), Forbes noted the grotesque mismatch of resources being fielded, with the Bavarians outspending Dortmund 4-to-1 on payroll. Munich prevailed then (and has gone on to sign two of Dortmund’s top stars) but last week stumbled in its defense of its European crown, losing in an upset to Real Madrid (a team that can match its resources) in one of this year’s semifinals.

Why do Germans bother following a league so lacking in Chancengleichheit (what Americans call equal opportunity)? Wouldn’t it be endlessly frustrating being a Stuttgart or Freiburg fan, knowing year in and year out that things are hopeless, even before the first match? And wouldn’t it get old being a Bayern fan, knowing you purchased your wins? Yet the Bundesliga continues to attract more fans to its games, on average, than any other European soccer league.

“Americans have this notion that there must be competitive balance to keep things interesting,” says Stefan Szymanski, co-author of Soccernomics and a sports economist at the University of Michigan. Szymanski confirms that no other major soccer league in Europe is so dominated by one team as the Bundesliga is by Bayern.

“But what fuels sports fans’ interest is a compelling story, and that can sometimes be the opposite of parity,” he adds, citing Tiger Woods as a draw for golf when he was at his unbeatable peak. People want to see a master at play, see how long dominance can be stretched. Bayern’s awesome prowess these days does have a history-making feel about it; it’s hard to look the other way.

And, as Szymanski also points out, European soccer teams have many interests, and “so much more at stake for fans beyond trying to win a championship.” Survival, for one thing. Instead of boosting the worst teams with all sorts of competitive advantages as the NFL does (think of it as Gridiron Welfare), the Bundesliga, like most other soccer leagues around the world, features the nifty Darwinian tool of “relegation.” Each season, the worst-performing teams get flunked down to a lesser league, whose champions ascend, and so on down the chain, between second, third, and fourth leagues. Some teams never come back, but just fade away, ruining the franchise financially and traumatizing its fans.

Americans clinging to their version of football’s radical parity—especially fans residing in places like Oakland and Cleveland that rely heavily on its redistributionist policies—had better hope that the NFL never is tempted to embrace the Darwinian inequality of European football. Not only would it consolidate all success in a handful of teams; it would also deprive us of needed ammunition to counter tiresome European lectures about American inequality.