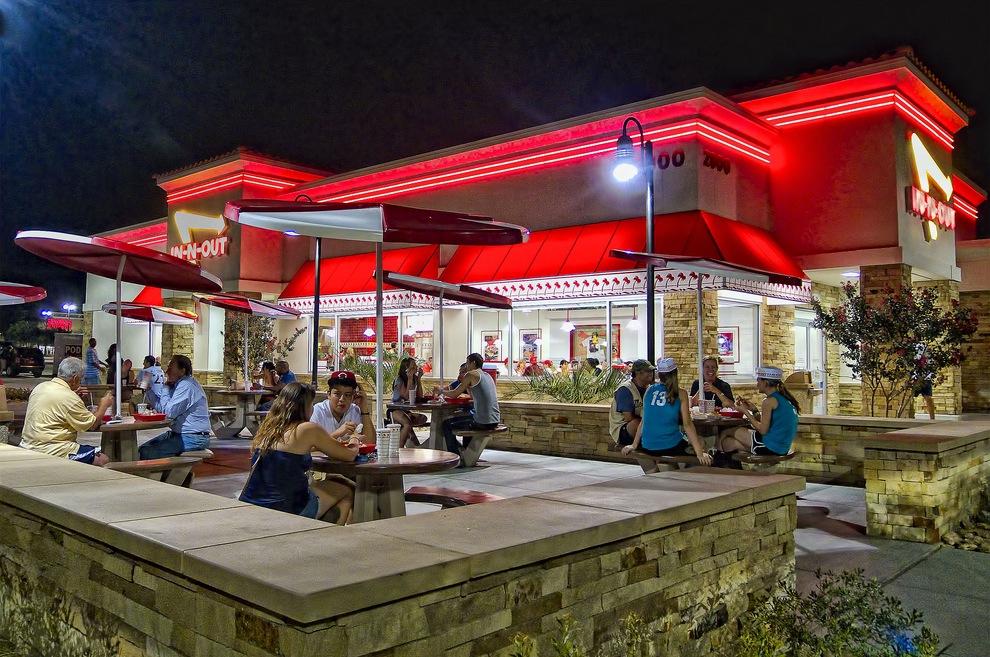 I pulled my rental car over to a curb in Plano, Texas, next to the site of Toyota’s future North American headquarters, to be staffed by thousands of workers transplanted from Southern California.

I had flown in the previous evening on Burlingame-based Virgin America; I had driven here on a tollway long maintained by Jacobs Engineering Group (headquarters: Pasadena). I had a full tank of gas, from a Chevron (San Ramon) station down the road.

Pulling my iPhone (Cupertino) out of the pocket of pants I’d bought at Gap (San Francisco), I Googled (Mountain View) food options in Plano and learned the town had a new Trader Joe’s (Monrovia). But I felt like a burger, and the iPhone told me that there were two In-N-Out Burgers (Irvine) nearby—one 10 minutes away on the other side of Plano, and the other just four minutes away, in the city of Frisco.

As I drove over to get my Double-Double fix in the heart of North Texas, a question occurred: If California and Texas really are in some sort of contest for cultural and economic supremacy, why do so many people labor under the delusion that Texas is winning?

Yes, California has an above-average unemployment rate and other economic problems, and many of our people and companies are relocating or expanding to states like Texas that offer cheaper living and generous economic incentives. But there’s another way to look at these departures of Californians and California companies: as a colonization of Texas and the rest of the country.

This colonization by California is not a sign of economic decline but a sign of—and a problem related to—our enduring success. Texas and other states are trying to steal our culture, our companies, and our jobs because we have so many things worth stealing. And while there is reason for concern about Californians and California companies going elsewhere, there is also reason for pride in our reach, our appeal, and the way we are remaking other states in our image.

During a weeklong trip to Texas, I could hardly take a step without running into a California import. In-N-Out opened its first two restaurants in Texas in 2011; today there are 21 along the I-35 corridor connecting Dallas and Austin, and San Antonio is eagerly anticipating its first In-N-Out by year’s end. Trader Joe’s, which first opened in my own Pasadena neighborhood in 1967, began a major expansion into Texas in 2012. I tried to visit two of the new Texas locations, but the lines of cars seeking entry to their parking lots were too long. Even our lesser culinary contributions—like Del Taco—are present here.

Our reach goes far beyond food; Californians create much of the TV Texans watch, the music they listen to, and the beauty and fashion they embrace. Gap’s website lists more than 60 locations in Texas. And Apple is building a new facility in Austin so massive that it could be the largest private sector employer in Texas’ capital by 2016.

Yes, it would be nice to see companies like Apple expand more in California. But there’s a blessing to these expansions that we too rarely talk about. California is not a prison or a vault, where the goal is to keep the inmates or valuables inside. We want our people and companies to prosper and expand around the world.

Unfortunately, back home, the movement of Californians out of state has fueled a fear of abandonment that’s turned into panic, at least in some business circles, about business and job losses. And that panic is inspiring some very counter-productive behavior.

San Francisco has deluged rich companies like Twitter with incentives they don’t need. Sacramento is borrowing millions to build an arena to keep the very rich owners of its very bad basketball team from moving to Seattle. Perhaps worst of all, the business and political leadership of Los Angeles is crazed with desire to give billions in tax breaks to Hollywood (which already gets big breaks on sales and property taxes)—even though there’s little evidence that more tax incentives would reverse the tide of runaway TV and film production to other countries and states.

Such panic-induced policy isn’t merely wasteful or foolish. It takes money and focus away from what California needs to do: make it easier to create new things so wonderful that Texas will want to steal them away.

Let’s get a grip, people. A big, successful state will always be a target for outsiders. Sexy industries like film, TV, technology, and pro sports will always be coveted. So let’s accept that we’ll always be losing what we have now and focus instead on producing new successes.

Doing that will be difficult and expensive. It requires us to invest considerably more in K-12 schools and higher education; get rid of costly, time-consuming regulations like the California Environmental Quality Act that discourage new development and business; lower the costs of housing and living for the young and ambitious; reduce taxes where we can; and make governance simpler.

The bad news is that we haven’t made much progress on these long-term projects. The good news is that, the more wonderful things that Texas imports from California, the more people will move there, and the more crowded and expensive Texas will become. Texas’ future may look very much like California’s present. That’s how colonization works.

So, like a 19th-century Englishman seeking out high tea in Siam, this Californian spent a recent Texas trip visiting In-N-Out Burger outlets. While colonization often produces new cultural mix (which is often delightful), I am happy to report that the Texas In-N-Outs remain 100 percent California colonies. The beef is unfrozen, the lettuce is hand-leafed, and the fries are cut from fresh whole potatoes. The T-shirts sold in Texas even depict the L.A. skyline.

And just as it does in California, my burger wrapper, reflecting the faith of company ownership, quoted the Bible’s Revelation 3:20. In that verse, Jesus lectures a wealthy, complacent congregation:

“Behold, I stand at the door, and knock: if any man hear my voice, and open the door, I will come in to him, and will sup with him, and he with me.”

California can’t be Christ-like in dealing with its economic competitors. But Jesus was right about the virtues of opening the door. Even when other states take from our table, they help us spread the word.