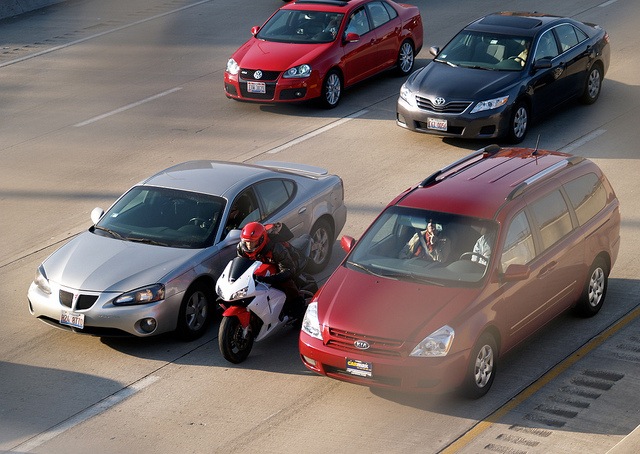 OK, riding a motorcycle is not safe. I know that because I’ve tried to argue otherwise with pretty much every non-rider in my life—my mother, my dad, my wife, my boss. And I usually don’t get past the part where they sigh and roll their eyes.

And like most non-riders, they think lane-splitting is crazy. Yes, I am that guy squeezing his motorcycle in between cars, riding the stripes and occasionally giving you an unsolicited cure for the hiccups. California is the only state that does not outlaw the practice, though that could change. The California Highway Patrol and the Department of Motor Vehicles used to issue guidelines on how to split lanes safely, but recently have withdrawn them.

That’s too bad. I do apologize to car drivers out there for the scare, but seriously, it is safer and better for all of us. I promise.

I have been riding motorcycles for 25 years. Although motorcycle riding is inherently risky, I believe you can make it safer. That’s why I am a strong proponent of lane-splitting.

I usually drive my car to work. It is a grueling hour and half on the 405 between the South Bay and Irvine. Plus, it’s not exactly a safe drive. A couple of months ago, I was in my car when I noticed a Cadillac following way too close during the morning rush hour. Sure enough, when the traffic came to a complete stop around Seal Beach, the Cadillac slammed into my rear bumper. The damage was about $400 in repairs.

The same trip is closer to an hour on my Triumph Speed Triple. And If I am riding, I assure you I am safer splitting lanes.

Why? It’s a simple case of physics and mass. A motorcyclist can react better to what’s in front than to a threat from behind. Whether I split lanes or not, I cannot eliminate driver error, but I can take precautions against what’s in front of me.

Also, more than a quarter of all motorcycle accidents involve motorcycles being hit from behind in traffic jams, according to a recent article in the Los Angeles Times. This occurs partly because motorcycles can stop faster than cars can, and many of the cars following motorcycles don’t account for this. There doesn’t seem to be any definitive studies on how safe lane-splitting itself is, but motorcycle safety experts agree lane-splitting is safer than the alternative.

When splitting lanes, I make sure that both lanes to the right and left of me are traveling at about the same low speed or stopped. When one lane is much faster, it is too tempting for a driver on the slower lane to make a quick move to the faster lane. In that case, I pull into the faster lane and ride along with the flow of traffic.

The guidelines the DMV is about to un-publish recommend traveling no more than 10 mph faster than the flow of traffic when splitting lanes. Splitting lanes is about avoiding traffic jams, so if any one lane is traveling at 50 mph, there should be no need to split lanes. Also, I am always scanning the drivers’ heads looking for sudden movements. From the high vantage point of a motorcycle and traveling between cars, it is relatively easy to see inside the cars ahead. A quick jerky movement often signals a lane change, and I can react by slowing down or stopping.

But, even when lane splitters take these precautions, drivers can be unpredictable. With terrifying frequency, I see drivers darting across double yellow lines, veering while putting on makeup or reading the newspaper (yes, that did happen on the 405) and treating turn signals as an optional accessory.

I’ll be the first to admit that too many of my fellow motorcyclists take unnecessary risks. About a year ago, I was on the Harbor Freeway coming home from downtown Los Angeles. It was rush hour, and traffic was at a standstill near the L.A. Coliseum. I was splitting lanes when I noticed in my side mirror another rider quickly gaining on me. The etiquette among motorcyclists is that when faster riders get behind you during lane-splitting, you always let them pass. I pulled to the side, and he careened by me, engine revving. He had to have been going at least 60 mph through what was essentially a parking lot. About two miles down the road, I saw rider and motorcycle sprawled in the middle of the freeway. Luckily, he seemed to have survived, as drivers helped him stumble to the side of the road.

There’s another reason for lane-splitting that is hard to understand unless you’re a rider yourself: It’s hard to be in warm weather on a motorcycle when you’re stuck in Los Angeles traffic. Here’s how I describe the feeling to non-riders: Get a small charcoal grill and light it up on your driveway during a hot summer day. Straddle that grill wearing jeans. Wait. Put on a leather jacket while you are at it. Now, you get an idea of what it is like to be stopped in traffic on a motorcycle in 80-plus-degree weather with a searing engine between your legs.

If you are a car driver, you may be asking yourself, what do I care about making it safer or more comfortable for motorcyclists? In a 2012 study, two-thirds of drivers interviewed said they disapproved of lane-splitting, and 7 percent actually admitted they had swerved to block a motorcycle. Yikes!

Here’s what’s in it for you, Mr. or Mrs. Car Driver. Splitting lanes during a traffic jam effectively increases the number of lanes so that motorcycles can clear through and not increase the total of number of vehicles stuck on the road. I know your misery would love my company, but really, how does that help you get home faster?

The DMV and the CHP are now withdrawing their safety guidelines for motorcycle lane-splitting because they don’t want to be encouraging the practice—even though it is legal and even though experts, including many CHP officers, agree that it improves safety and eases traffic congestion.

I am sorry, but discouraging lane-splitting is just dumb. And that’s coming from a guy who rides down a traffic jam with little more than a helmet and leather jacket for protection.