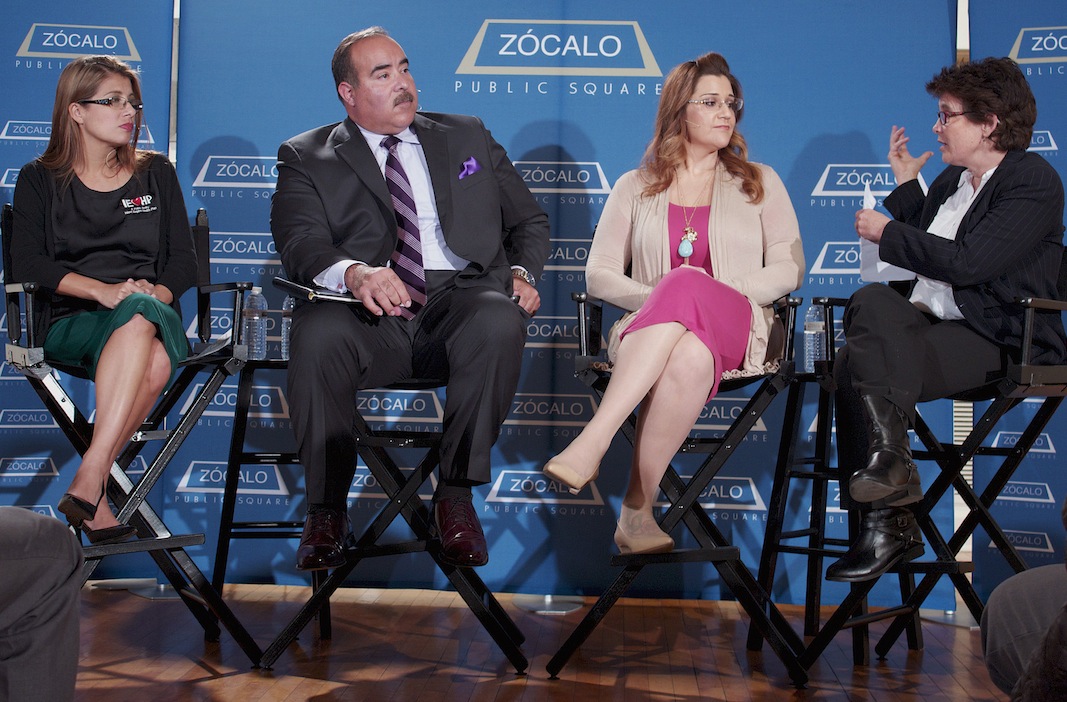 If you build it, they won’t come. So you’ve got to go to them. This was the big takeaway from the first year of the Affordable Care Act (ACA) in the Inland Empire, a region that desperately needed more healthcare coverage but was slow to get people enrolled. At a panel co-presented by The California Wellness Foundation at the Riverside Art Museum, public health and economic officials discussed how they’re working to reach the 500,000 people who were uninsured in the region before the implementation of the ACA.

Desert Healthcare District ACA campaign manager Samantha Prior, who works on enrollment in the Coachella Valley, said that in the first open enrollment period, large community events did not work well. So this time around, they’re going out to apartment complexes, community centers, mobile home parks, and hospitals to inform people of their options.

A lack of public transportation was an issue in the Desert Healthcare District, but other parts of the Inland Empire had other problems to contend with. Inland Empire Economic Partnership president and CEO Paul Granillo said it’s important to remember that Riverside and San Bernardino counties have a combined population of 4.3 million people. If the Inland Empire were a state, it would be the 26th largest in the country (just 70,000 people shy of Kentucky). It’s a mix of urban centers (Ontario, San Bernardino, Riverside) and more rural areas like Temecula and the High Desert. “If you’re going to paint your house, you’ve got to measure it and figure out how much paint you need,” said Granillo. “With the ACA and other initiatives, there’s always a failure to take into account the size and complexity of the region.”

Julie Marquis, senior editor at Kaiser Health News and the panel’s moderator, said the region’s diversity is part of this complexity: The Inland Empire’s population is close to 50 percent Latino, 7 percent African-American, and has a growing Asian population as well. What, she asked, is the healthcare literacy of these groups?

Granillo said that it’s impossible to lump these groups together. There are 2 million Latinos in the region (the fourth-largest concentration in the nation) for instance, and just 18 percent of them are newly arrived. There are also generational divides. An older generation went to work at the steel mill and received insurance on their first day on the job. “You didn’t have to worry about it,” he said. “It was part of the package. That has changed.”

Marci Aguirre, director of community outreach for the Inland Empire Health Plan, which serves low-income patients on Medi-Cal, said the region’s undocumented and newly arrived immigrants have faced a particular set of challenges. Language was a barrier—particularly because Spanish-speaking enrollers were extremely scarce in the first open enrollment period. Another barrier was fear and confusion over who was eligible in mixed-status families with documented children and undocumented parents. She said that a number of people who lacked green cards or even documentation (under deferred action, for instance) were eligible to enroll but didn’t know it.

Marquis asked the panelists if the region’s healthcare infrastructure is keeping up with the growing insured population.

Granillo said that keeping up with the region’s growth—as well as the growing poverty rate—is a challenge, period. “We are under-doctored and under-nursed and under-hospitaled,” he said.

Aguirre said that the Inland Empire Health Plan has been growing its network of doctors and healthcare providers since before the ACA was implemented. “We don’t turn doctors away who want to be part of the network,” she said. The plan recruits, too: They’re offering grants to doctors to move their practices, or a portion of their practices, to the region.

Medi-Cal, said Marquis, is not popular among physicians because it doesn’t pay very much. How do you entice doctors to serve low-income patients?

The region is also trying to create a pipeline of homegrown doctors through UC Riverside’s new medical school. There are a number of new loan forgiveness and tuition reimbursement programs for doctors who stay local for a certain period of time after graduating, said Aguirre.

A key element of the ACA is shifting the burden of healthcare from high-cost emergency room visits to preventative care. Marquis asked the panelists to talk about the demand for such services from people with chronic conditions that are prevalent in the region, like asthma.

Prior and Aguirre both said that educating people on the resources available to them is hugely important. Prior said that homeless people now qualify for free preventative care, and her district has been trying to spread the word about this increased access.

Aguirre said that a new program that offers home visits to families who visit to the emergency room frequently for non-emergencies has been very successful. People don’t realize they have options beyond their primary care physician or the emergency room—from urgent care to a 24-hour nurse care line. Even offering advice as simple as writing down your questions for the doctor before going into an appointment can help people learn more about their health issues.

In the question-and-answer session, an audience member asked the panel how they get past the complexity of the ACA to educate regular people.

Prior said that partnerships with neighborhood groups and nonprofits have been key. These groups are already in schools, in churches, in community centers; they’re holding events in the evenings and putting out information in the newsletters people already receive. 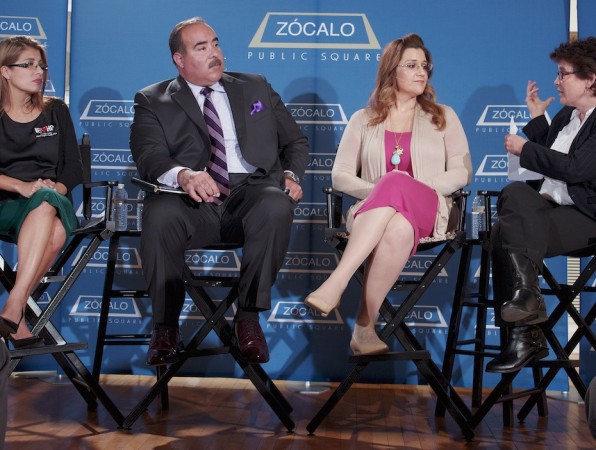 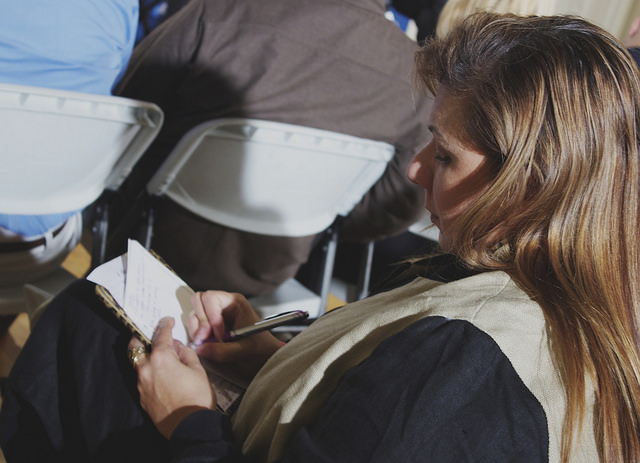 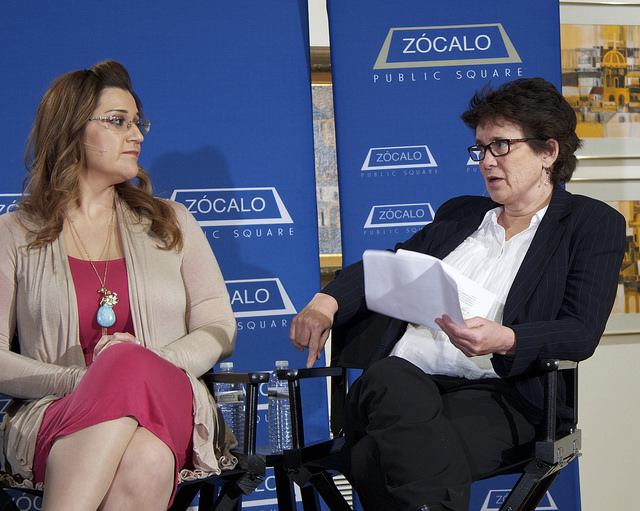 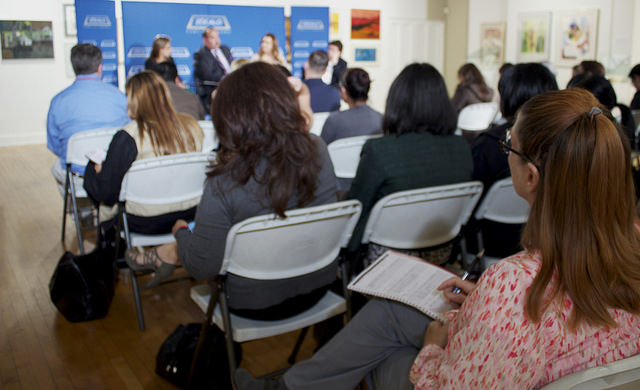 The audience at the Riverside Art Museum 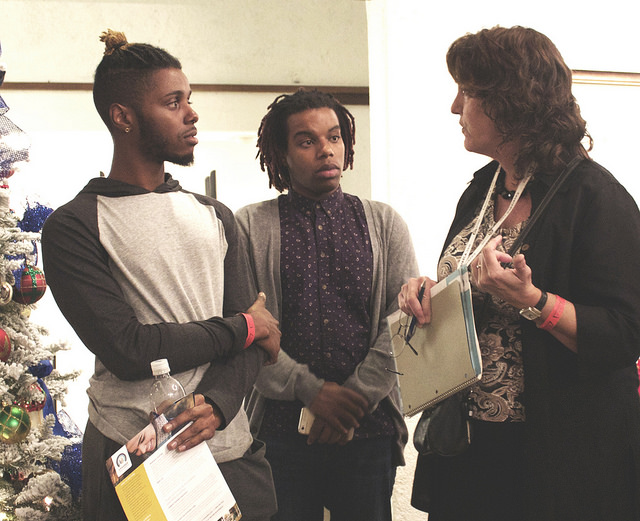 Chatting at the post-event reception 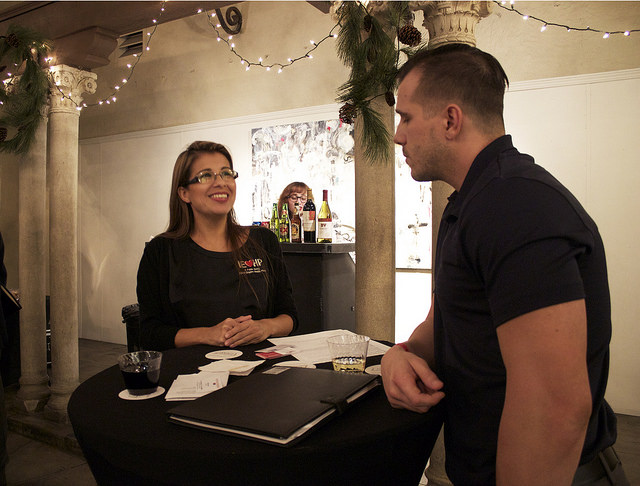