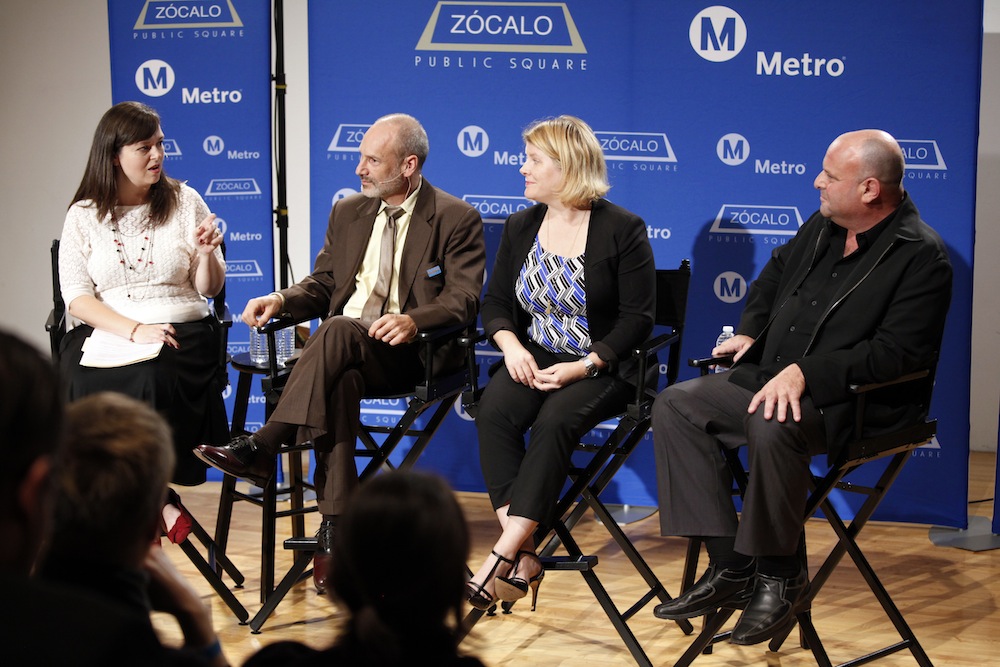 Aaron Paley, native Angeleno and founder of the CicLAvia bike festival, is tired of reading the same newspaper and magazine stories over and over again proclaiming that Los Angeles is at last “coming of age.” Paley opened a panel co-presented by Metro on the question of whether L.A. is mobile enough to be a global city with a bold proclamation. “We’ve been a great city all along,” he told the crowd at MOCA Grand Avenue. “We are a global city.”

Seleta Reynolds, who became general manager of the Los Angeles Department of Transportation earlier this year, agreed. But she said that myths about L.A.’s identity persist, and if we want to become a truly 21st-century city, we’ve got to bust those myths and offer more transportation choices.

Put downtown Los Angeles in the center of a circle that’s the size of the cities of Boston, San Francisco, and Washington, D.C., said Reynolds. The city you’ll find in that radius looks very much like those other cities, with people walking, biking, taking taxis, and riding mass transit. Thanks to new technology (like Uber), a burgeoning economy, and even traffic, Angelenos want to use streets in a different way, said Reynolds.

Paley agreed, although he said that in some ways, Los Angeles today is two co-existing cities. In one, people drive everywhere. In the other, people are embracing different kinds of transportation.

The latter city is not made up of just millennials, said Reynolds. Baby boomers are increasingly turning their backs on driving. And Angelenos collectively may love their cars, but they also hate traffic.

Architect and UCLA cityLAB co-director Roger Sherman pointed to a more fundamental shift in Southern California. For a long time, “the freeway was considered to be the source of L.A’s exceptionalism,” said Sherman. “We knew mobility like nobody else did.” And mobility in Los Angeles was about desire as much as it was convenience. Angelenos wanted to drive, they liked driving, and they chose a lifestyle that required it. But the good news, he said, is that Los Angeles can still be exceptional—because this is a city that still believes “mobility is about experience, not just convenience.”

Reynolds concurred, adding that transportation should be fun, and that designing the city’s future should be about more than getting people from point A to point B.

But, said Keating, as great as an “experience” sounds, the idea of riding a bike to a bus and then switching to a train doesn’t seem all that appealing to most people. How do you change the perspectives of people who just want to get in their cars and drive to their destination?

Paley said it’s about starting small: Give people an enjoyable pedestrian experience on the walk from their house to the grocery store.

But even that isn’t easy. Sherman said that transportation planners have neglected the last mile or half-mile of people’s trips, and he doesn’t see the public sector filling that gap any time soon. He does, however, think that tech entrepreneurs and private sector innovators just might be able to enact more change. He pointed to Tokyo, where Japanese department stores built a train system to bring in shoppers, as an example of what such change could look like.

Paley cautioned against the creation of a city that’s not affordable for the people who live here already. He said what he doesn’t want to see is a Los Angeles where the single-passenger automobiles we drive are replaced by single-passenger driverless cars. The future of transportation in L.A. has got to be about enjoying the “pleasures of urban space and interaction”—which wasn’t the original dream of driving down the freeway at 90 mph, he said.

Sherman said that a “dirty little secret” of transportation in Los Angeles is the class differences associated with different ways of getting around.

But that is changing, too, said Paley. When he went carless by choice in the early 1980s, people thought that “a white, Jewish, middle-class kid from the Valley” without a car was insane. The task ahead, he said, is to make transit compelling for everyone.

How big of an investment are L.A.’s elected officials willing to make in such a system?

Reynolds said that transportation funding is less siloed than it used to be—for decades, it was easy to get money in California for bicycle projects but not pedestrian improvements, for example—and that public-private partnerships are going to be key.

In the audience question-and-answer session, the panelists were asked for their “nutshell utopia” vision for L.A’s cityscape.

Paley said his is “multi-modal,” without the “tyranny of the car.”

Reynolds said that hers has zero traffic deaths by 2025. She’s more interested in the journey than the destination—in creating open dialogues among communities and multi-disciplinary experts about the future of our streets, and creating a culture of constant tinkering and innovation.

Sherman said his is “a form of retro-medievalization” where organizations (like neighborhood associations or local nonprofits) are given latitude to undertake creative projects. Los Angeles is becoming more generic than it needs to be, said Sherman. Why, he asked, has the Grove become a sensation? Why do people prefer an ersatz environment over a real street? Because it was created holistically, around one guy’s vision. And perhaps the rest of L.A. could learn something from its success. 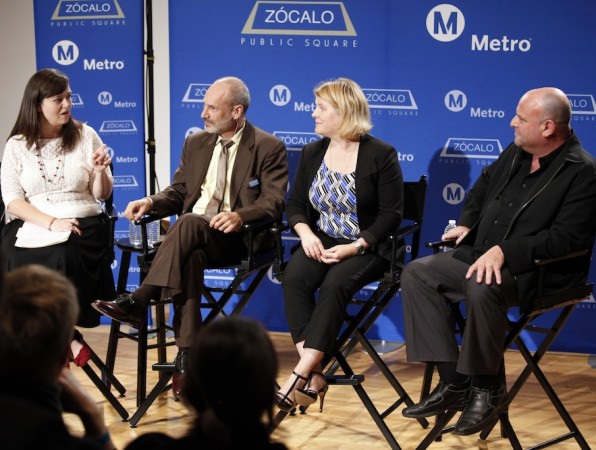 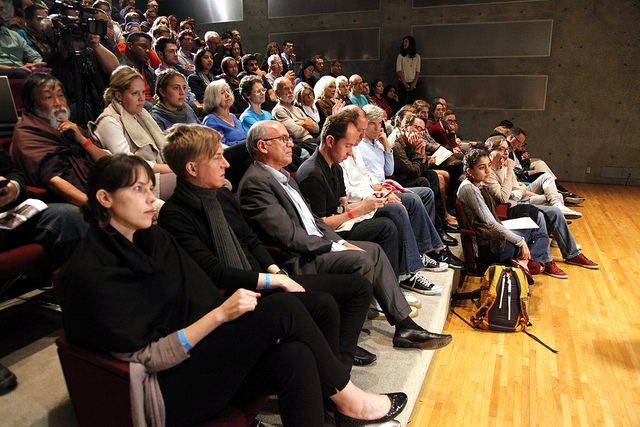 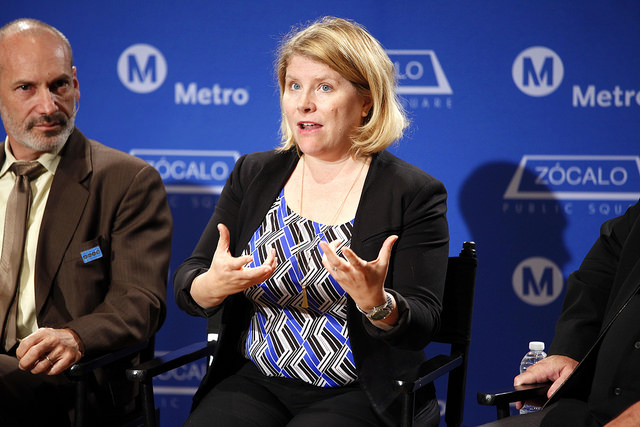 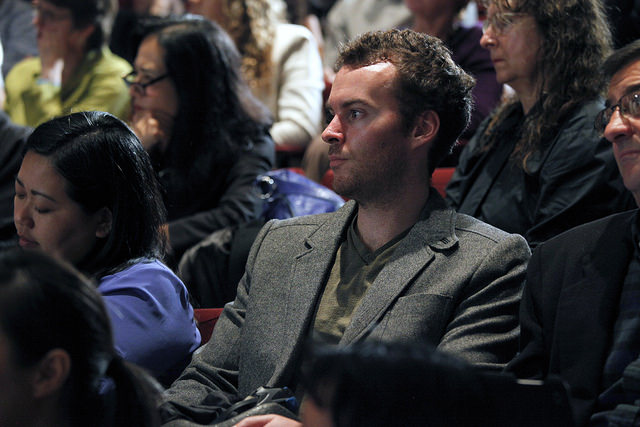 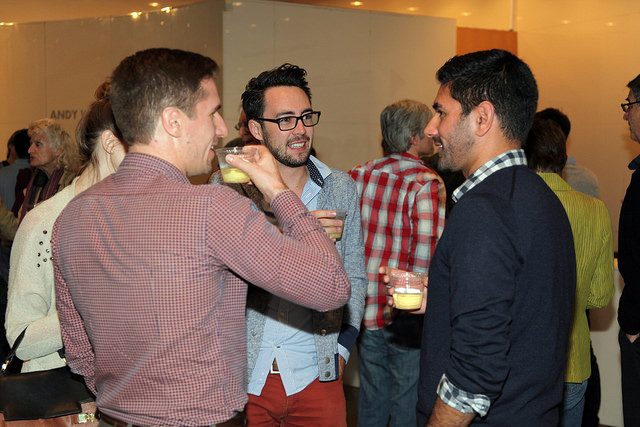 Guests enjoy the reception after the discussion 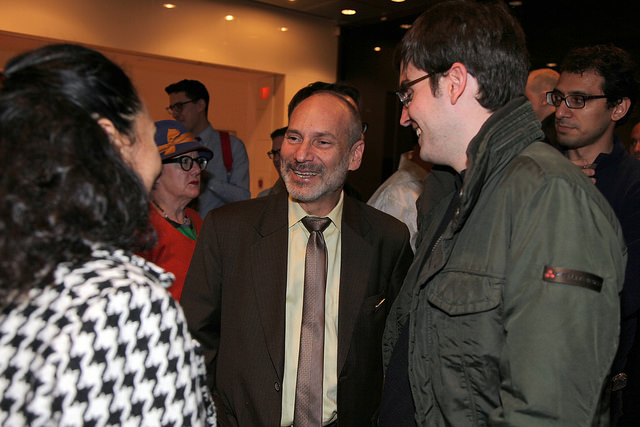