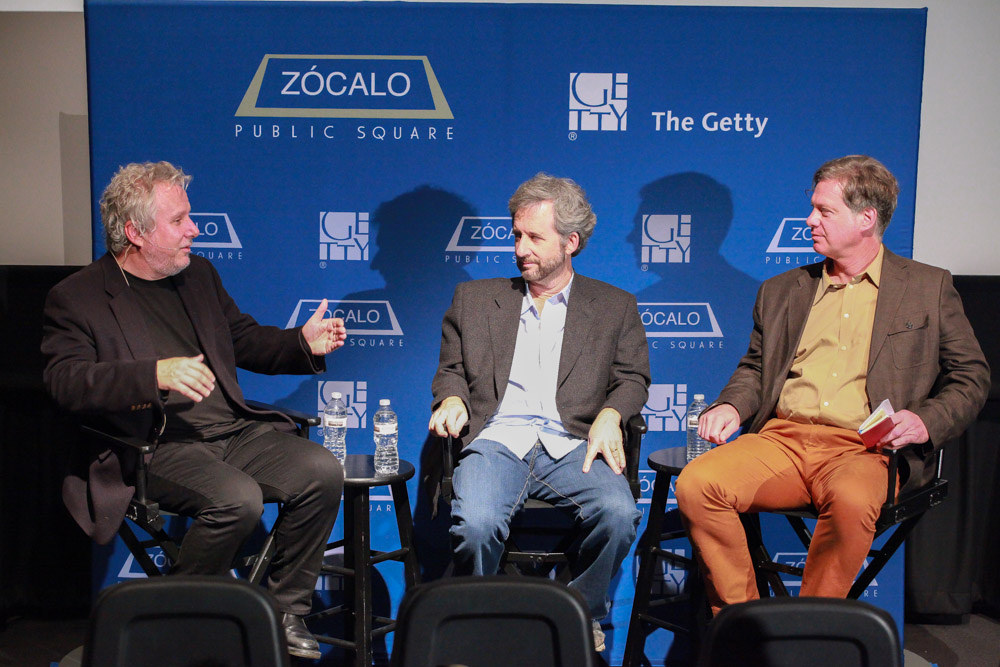 What makes a piece of art great? Which artists’ stories are worth telling? And why are biopics about the great artists generally pretentious and boring? After a screening of their new movie Big Eyes, writer-producers Scott Alexander and Larry Karaszewski discussed these questions at a Zócalo/Getty “Open Art” event at the Landmark Theatre.

The Tim Burton-directed Big Eyes tells the story of Margaret Keane (played by Amy Adams), an artist whose surreal paintings of doe-eyed young girls became a sensation in the early 1960s. Keane, however, wasn’t credited with the work for many years: Her husband, Walter (played by Christoph Waltz), marketed himself as the painter. Although the story of Keane’s fight to be recognized as the artist is dramatic, she’s not obvious biopic material. Like the low-budget genre film director Edward D. Wood, Jr.—the subject of an earlier Burton-Karaszewski-Alexander collaboration, 1994’s Ed Wood—Keane is a marginal, outsider figure.

Getty Museum education specialist Peter Tokosfky, the evening’s moderator, asked Alexander and Karaszewski why they are drawn to these types of people.

Alexander said that part of what makes both Wood and Keane compelling is that “they’re swimming in the wrong direction at all times.” They have a cockamamie dream; sensible people tell them that dream is wrong; and yet they still won’t give up.

But they are both people who have accomplished a great deal, said Karaszewski. And the fact that some people love their work and some people hate it is precisely what makes them ripe for drama.

“What is low art, and who are these people who are saying this is low art?” asked Alexander. He said that in both Ed Wood and Big Eyes, the question of who the gatekeepers are looms large. If a 12-year-old girl hangs a Keane print in her bedroom, looks at it every day, and feel something when she looks at it—“isn’t it valid art?”

Tokofsky pointed out that Wood and Keane have the same ambition and passions as the great artists you typically see in a biopic.

“I find most movies about artists pretentious,” said Karaszewski. When a biopic is of a great man, there’s a lack of conflict—he’s either an alcoholic or gets into a dramatic marriage. With Big Eyes, the writers aimed to put the art center stage. Margaret Keane’s work also takes on different meaning when you know the backstory. When the paintings appear to be by Walter Keane, they seem kitschy, said Karaszewski. Once you know they’re the work of a woman trapped in her attic, painting anonymously, the eyes in the paintings take on a genuine sadness.

Tokofsky said that if you believe a recognizable style is a mark of quality—that you know a work by Ed Wood or Van Gogh when you see it, say—Margaret Keane is a great painter.

Karaszewski agreed, noting that the knockoffs of Keane’s art lack a certain quality and can instantly be identified as fakes.

“The eyes are sort of dead,” Alexander confirmed.

Karaszewski said that they did have to give Walter credit for the role he played in the commercialization of art. “He’s the guy who figured out the whole ‘exit through the gift shop’ mentality in the art world today,” he said. “The whole line between high art and low art, and art and commerce, has been totally obliterated.”

Alexander explained that in making the art all about commerce, Walter would give the original, valuable paintings to celebrities like Natalie Wood and Joan Crawford. Then, he would produce prints as cheaply as possible, frame them as cheaply as he could (with help from the actual Aaron brothers, whose frame stores are now all over), and sell them everywhere from hardware stores to gas stations.

Tokofsky asked the writers to explain how they ended up making the movie, which has its origins in a different project: a movie about 20th-century American popular culture taking over (and ruining) the culture of a planet of higher intelligence.

As he was looking for terrible things to spring on that planet, Alexander found Keane in an “encyclopedia of bad taste” owned by his wife.

As they worked on the project, Karaszewski said they found that “everyone knows the images, but no one knows the real story.” The Keanes were past the height of their fame by the time Margaret brought Walter to court in order to get credit for the big eye pictures. And when the truth came out, it was buried in the newspapers, far from the front page.

In the question-and-answer session, an audience member asked about Walter Keane’s claims that he painted the backgrounds of Margaret’s work.

If the paintings were a collaboration, Alexander said, he found it hard to believe that Walter could live another 35 years after he and Margaret broke up and never produce another painting. He and Karaszewski did as much research as possible to get the real story—and there was “no way to believe Walter’s version of anything,” said Alexander.

His “side of the story just literally made no logical sense,” said Karaszewski. 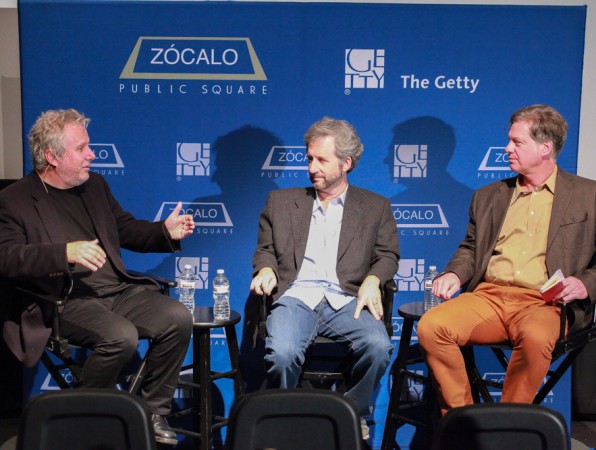 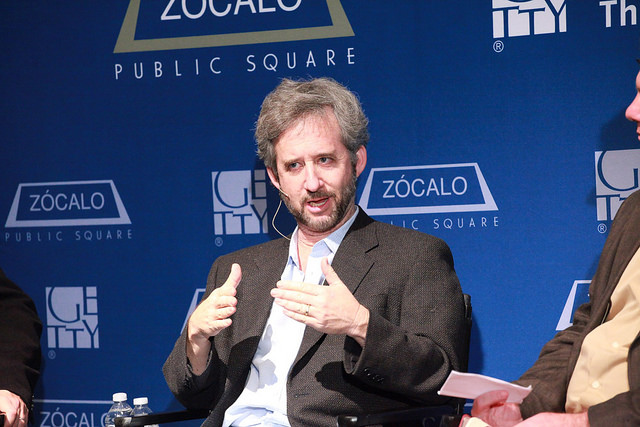 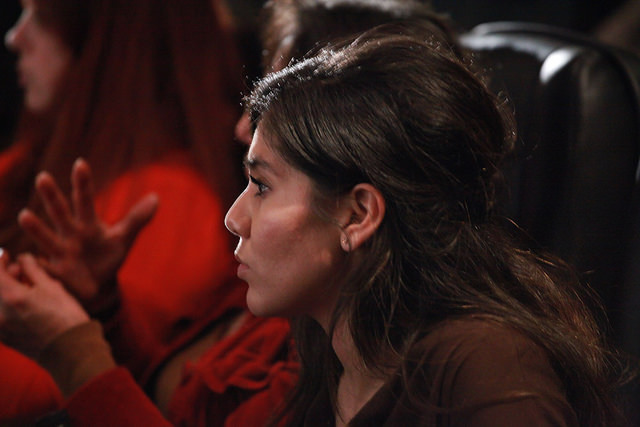 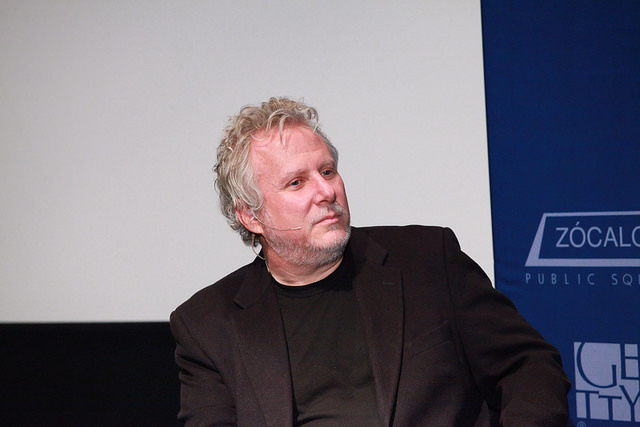 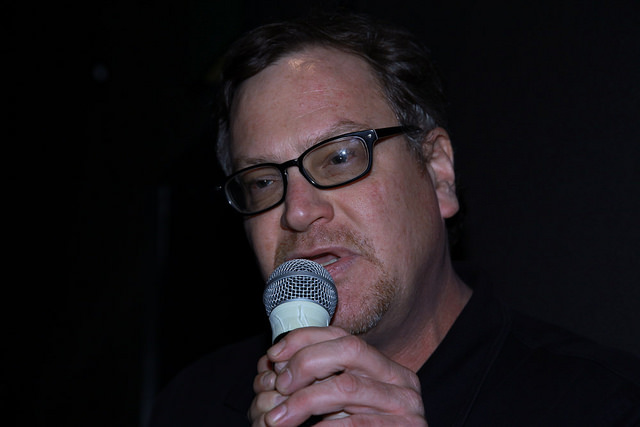 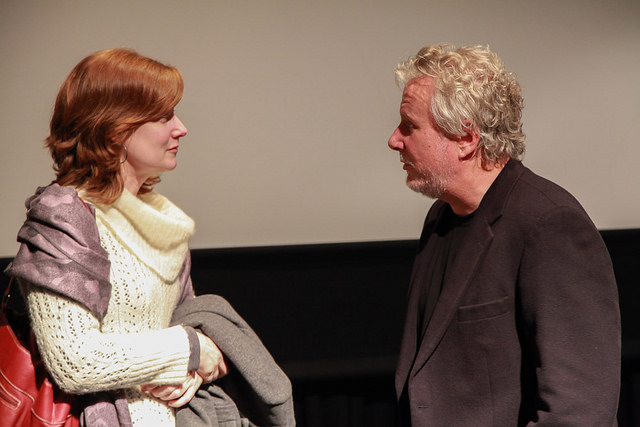 Karaszewski talks with an audience member after the discussion