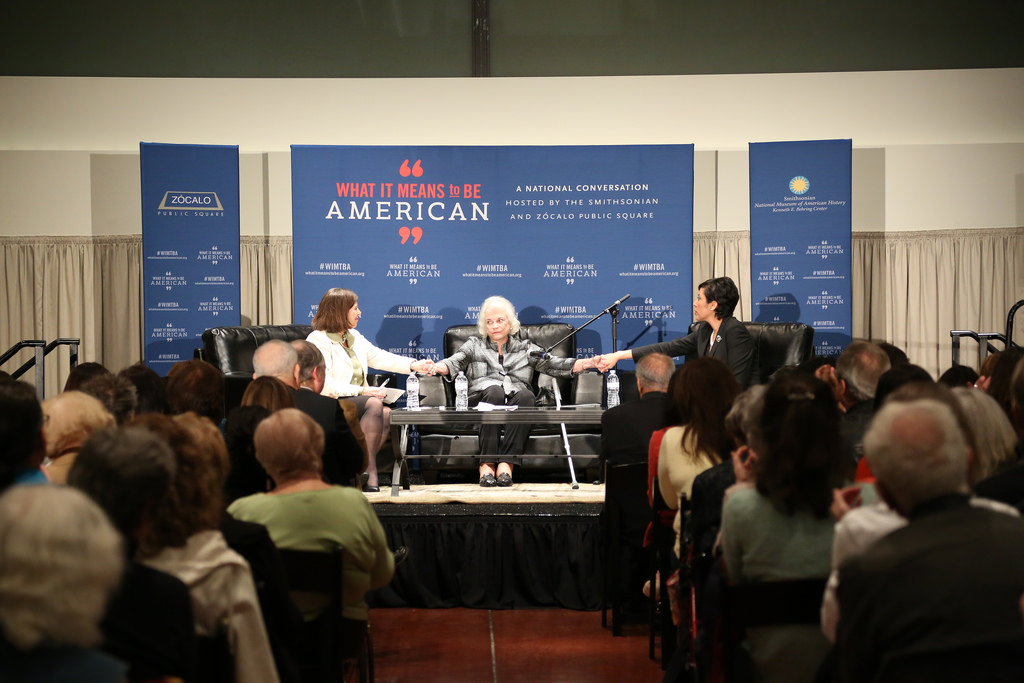 Justice Sandra Day O’Connor and Girl Scouts USA CEO Anna Maria Chávez both grew up in rural Arizona. Both went on to become lawyers. And both were historic “firsts.” O’Connor was the first woman to serve as Arizona State Senate majority leader—and the first woman to be appointed to the U.S. Supreme Court. And Chávez is the first Latina to lead the Girl Scouts.

In front of a standing-room-only crowd at the “What It Means to Be American” launch event at the Heard Museum in Phoenix, O’Connor and Chávez talked with Sacramento Bee publisher (and native Californian) Cheryl Dell about what it means to be a woman in the American West, how they blazed their particular paths, and what’s next for women in America.

Dell opened the discussion by asking how growing up in Arizona created opportunities for both women, and helped shape who they are today.

“I can’t imagine having grown up in any place except the Southwest,” said O’Connor. Calling herself a “ranch girl,” she recounted the joys of growing up on the Lazy B, the ranch her grandfather started in 1880 near Arizona’s border with New Mexico. But being a ranch girl wasn’t easy. “Everything was work, and try to get the jobs done,” said O’Connor. You learned how to give your all—all the time.

Chávez grew up in Eloy, Arizona, between two brothers whose games she always tried to join. When they told her she couldn’t serve as army general one day, she started her own club. Then a friend told her about the Girl Scouts. She credits the organization with teaching her about protecting the environment before she became a teenager. She made up her mind “to change the world and protect it for other kids,” she said.

Both O’Connor and Chávez pointed to their parents as role models, and credited their families for prizing education above all.

“Education was the thing that drove opportunity” for women, said O’Connor.

“It was the equalizer,” said Chávez.

After graduating from law school, Chávez headed to Washington, D.C., where she got a job as an attorney at the Department of Transportation under President Bill Clinton.

O’Connor graduated at a time when law firms weren’t hiring women. “Nobody wanted to talk to me,” she said—but she eventually got a job at the district attorney’s office in San Mateo County, California.

O’Connor was the only woman lawyer in that office—and in all the offices she worked in for her first 20 years or so. Dell asked if she was aware of being a role model in that regard.

“I didn’t think in those terms,” said O’Connor. The only question was whether she was going to get a job.

O’Connor herself didn’t have any early career female role models. But she did recall that Eleanor Roosevelt visited her grade school and spoke to the students—something she had to keep secret from her Republican parents.

For Chávez, O’Connor was a role model. Chávez recounted that in the ceremony where she was admitted to the bar of the Supreme Court, O’Connor winked at her when Chávez was introduced as being from “the great state of Arizona.”

Both women benefited from their husbands’ support. Chávez’s husband has moved three times for her career. When President Ronald Reagan called regarding a Supreme Court gig, O’Connor “gave him a choice,” she said. “He thought it was a pretty good offer.”

Dell asked O’Connor and Chávez what it’s like to be named one of the most powerful women in the world.

“Well, you try not to read that garbage,” said O’Connor. “You certainly don’t have to believe it.” Instead, you “just go on and do your job.”

Chávez said that the same day she was appointed CEO of the Girl Scouts, she ended up at the local Target in San Antonio, Texas, at 10 p.m. She had run out of bread; her husband needed deodorant; her son had lost a tooth, and she was buying him Legos as the tooth fairy’s reward. At the checkout line was a copy of People magazine, and she was in it. She started laughing, and after she explained why, the lady at the register said, “‘I don’t know about you, lady, but I’d be out having steak and champagne.’”

“You keep going,” said Chávez, echoing O’Connor. “You’ve got to get it done.”

But not all women keep driving on. Why, asked Dell, do you think so many girls and women talk themselves out of their potential?

Speaking to her own experience, Chávez said, “If you come from less, you have less to risk.” But she also said that girls who don’t see girls “on the other side of the table” are less apt to try something new. The number-one indicator for success for girls is whether they have a role model in their lives.

Before turning the event over to questions from the audience, Dell asked the women for their “favorite label”—the phrase they most like people referring to them as.

“I didn’t mind being called ‘the Justice,’” said O’Connor, to uproarious audience laughter.

An audience member asked if the speakers felt there is a “war” or “backlash” against women in America right now.

“Not in my neighborhood,” said O’Connor, and not in Washington, D.C., either. She sees women participating in American politics and public life more than ever. It is not a downhill slide, she said.

Chávez, an American history buff, said that this kind of feeling or sentiment tends to be cyclical. She pointed to a bipartisan group of elected women officials who were instrumental in passing Congress’ budget as an example of the power wielded by women right now.

The final question of the evening was for O’Connor: “What do you think your legacy is?” 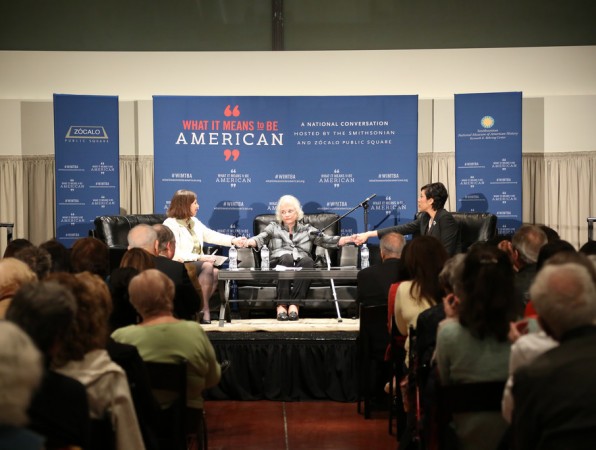 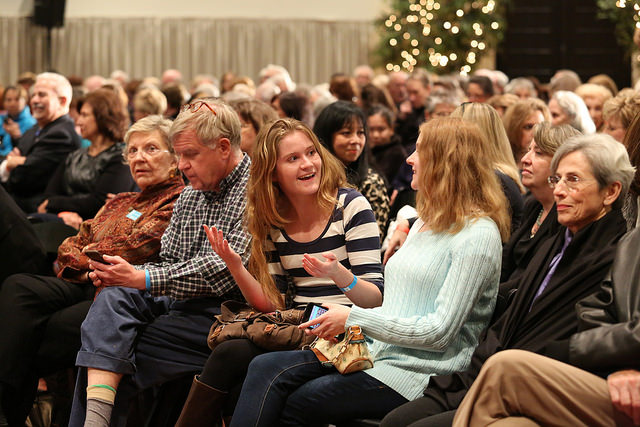 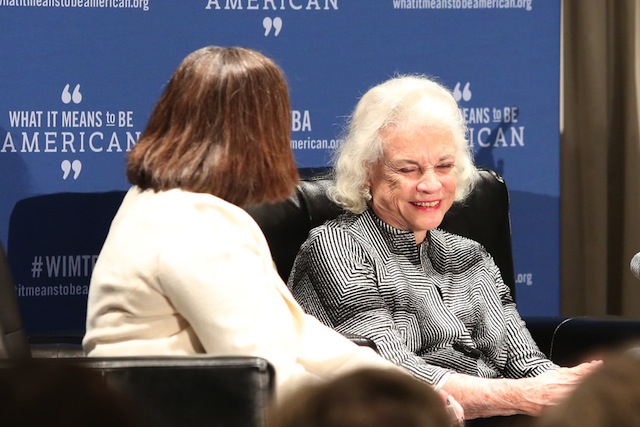 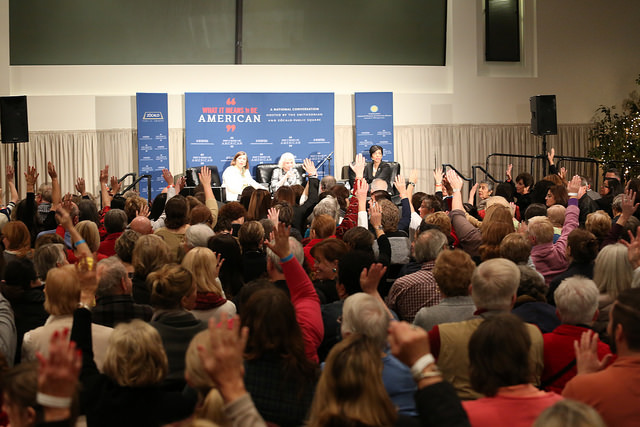 When Chávez asked how many audience members had been Girl Scouts, hands shot up 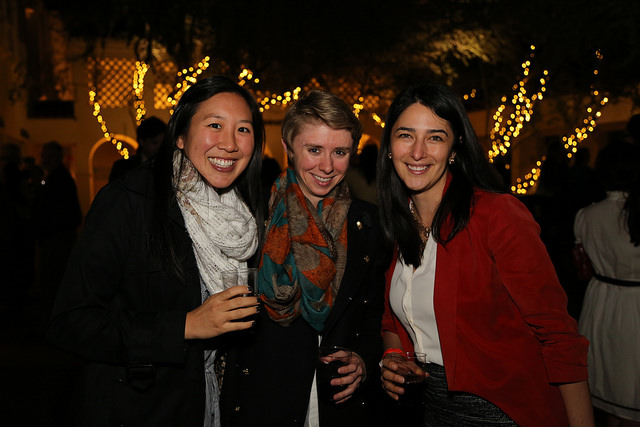 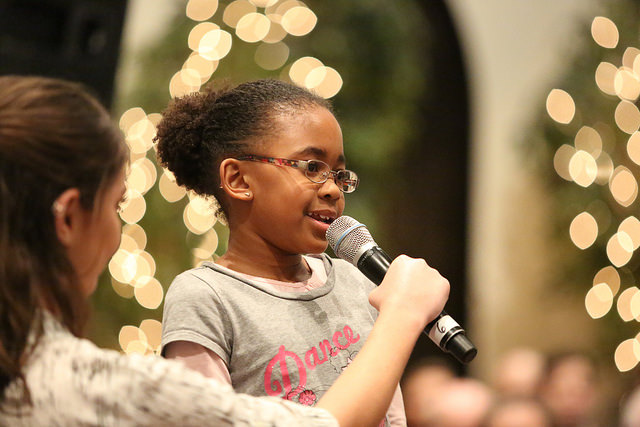 A Girl Scout (from Troop 999) poses a question to Chávez