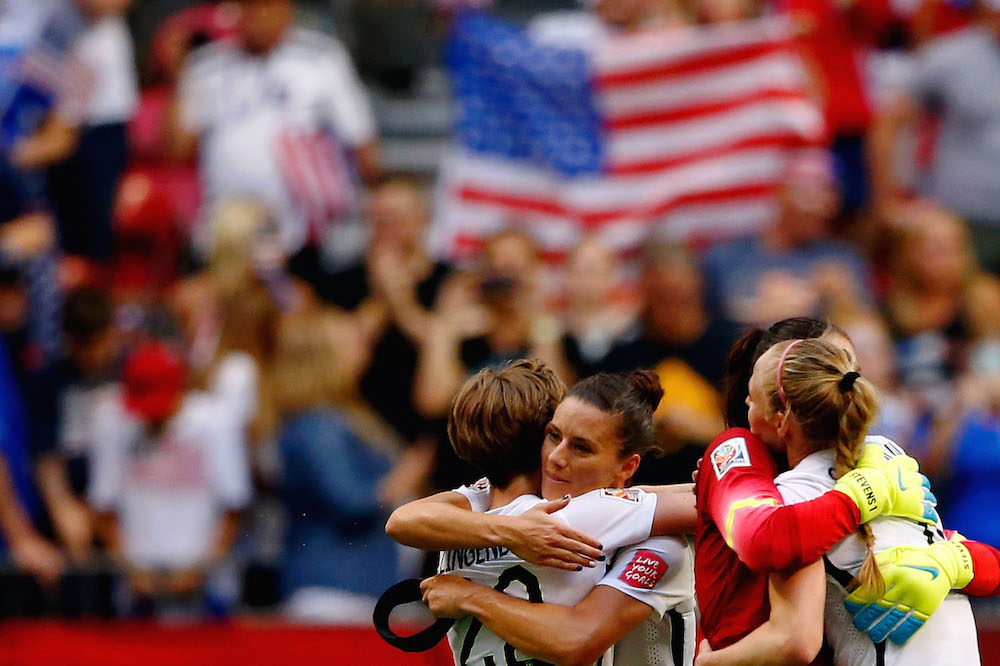 He sat on the edge of his seat, tense, cheering and simultaneously yelling at the refs, shifting from side to side with each movement of the ball. No, my 9-year-old wasn’t watching LeBron and Curry, he was watching Wambach and Morgan.

Every day he asks, “Who won today, who’s playing next, how did the U.S. do and can we watch, pretty please?” As Team USA advances to the elimination rounds, his excitement grows.

We’re big sports fans. My husband has coached Jake in three sports. Pretty much the only television we watch involves sport—basketball, football, tennis, college, pro, national, you name it. So, when Jake took a keen interest in the Women’s World Cup I wasn’t surprised.

What struck me, though, is that he doesn’t qualify it. He isn’t into the “Women’s” World Cup; he’s into the World Cup. He isn’t watching “girls’” soccer; it’s just soccer.

He watches the sport free from labels and judgments. His enthusiasm is fueled by compelling athletes representing their country, leaving it all out on the field.

So, it begs the question: Will Jake eventually come to view women’s sports as second class or are we witnessing a cultural shift? Is his gender egalitarianism a matter of innocence that will be lost, or an enlightenment never attained by most of the adults around him?

As he cheers on Team USA, Jake isn’t privy to some of the discouraging context surrounding the Women’s World Cup. He doesn’t know that this World Cup is being watched by a minuscule global audience compared to last year’s men’s World Cup, or that its games are played on artificial turf while last year’s were played on carefully manicured grass. He doesn’t know that the players in these games struggle to make a living off soccer, while their male counterparts are wealthy beyond their dreams on account of the deep-pocketed leagues in Europe and elsewhere. And, no one has ever told Jake that the women’s game is supposedly “less exciting” than the men’s game.

He sees hard-nosed competition and he likes it.

I know a thing or two about the elusive quest to have women’s sports be taken seriously, having worked for three seasons as a senior vice president with the NBA Phoenix Suns, which is owned by the same group as the WNBA Phoenix Mercury.

We struggled mightily to engage a broader fan base for the Merc despite having a women’s team that was more successful than its male counterpart. The Suns, while close, have never won a championship. In fewer years, the Mercury have won three. For the last three seasons, the Suns have been devoid of a superstar. The Mercury roster boasts two: Dianna Taurasi and Brittney Griner (she dunks!).

And still, attracting a following and widespread public support (as measured by ticket sales, TV ratings, and merchandise sales) remains a challenge for the Mercury and the WNBA broadly. The funny thing is that when people actually give the Mercury a chance, they turn into fans more often than not. The competitive intensity is all there, minus some of the dunking and flash.

While the skills gap between men’s and women’s soccer may be smaller than it is in basketball, soccer has yet to attain the gender parity you see in tennis. This may be due to the fact that many of the world’s leading soccer powers have been slower to embrace the women’s game. Or, it may be due to the fact that the anemic promotion of women’s soccer is more like what happens in basketball than in tennis. And make no mistake, promotion matters.

In a world of constant noise and chatter, it’s the messages we hear most often that stick with us, and you don’t hear much about women’s soccer outside of the World Cup every four years. It’s the noise that drives interest, interest that drives dollars, and dollars that pay for everything else.

What if the likes of Nike, Adidas, Coke, and Gatorade spent as much promoting female athletes as they did men? What if women’s leagues had the same marketing budget as men’s leagues? What if the National Women’s Soccer League got as much airtime in the U.S. as the English Premier League?

Naysayers will say all of that would happen if the interest were there. I say, increase promotion and the interest will follow. It’s the difference between having a market and creating one. Premier League ratings are growing steadily not because of some pre-existing clamor for these games, but because of NBC’s masterful marketing of the league and its storylines.

It’s what the NBA has been doing in China (and beyond) for years. Before David Stern took over the league, there wasn’t a single NBA game televised in China, so he gave it to them for free. Why? In the hopes that if you build it, they will come. Now, the NBA is one of the most popular brands in China and a growth market for the League.

People weren’t clamoring, likewise, for American football in London, but the NFL is banking on the idea that if you schedule enough regular-season games there over time, an expansion NFL team in Europe will soon be viable, expanding the game’s reach.

Creating a market takes risk and a willingness to lose money over the short haul. But, while we’ve seen a willingness to do that in men’s sports, it’s largely missing on the women’s side. Tennis is the one sport that has been able to create something resembling virtual gender parity in terms of fan interest and resources allotted.

This can’t be accomplished by leagues alone—or overnight. Sponsors have to invest in the effort. The NBA has opened up China, so you know what the big brands are doing? Sending the players they endorse over to China to promote their products. Players are interacting directly with Chinese fans via Chinese social media. The NBA, its sponsors, and players are creating noise. Lots of it. American fans and sponsors should make a lot of noise around women’s soccer: we may be late to the world’s game overall, but we were pioneers in treating the game as one suitable for both boys and girls.

Promotion alone is not enough; you must start with a compelling product. No one watches the New York Yankees, L.A. Kings, or the Washington Wizards just because they saw a billboard. Fans want competition; they want entertainment; they want to associate with winners; and they want to root for likeable players representing their community. Women’s sports already deliver on the first three, and with more promotion, we could get to know more of the athletes.

In my day job now, I work with people who want to be better leaders, have greater influence or grow their companies. One thing I tell them is that if they want something to be different, they need to change the way they think about it.

What if we quit thinking about women’s sports as different? Imagine if no one pointed out the girl who tries out for Little League. What if we took our sons to more basketball games, not women’s basketball games? And for crying out loud, quit telling our kids they “throw like girls.”

Maybe for Jake and his generation, “women’s sports” will become just “sports”—to be followed and enjoyed concurrently with men’s sports.

But the rest of us need to help this aspiration along, with the right cultural and business infrastructure for women’s sports. Last week Marta, a Brazilian player, broke the record for all-time scoring in the Women’s World Cup edging out Germany’s Brigit Prinz. Her nickname, “Pele with skirts” is unfortunate, but shouldn’t detract from the fact that she is widely considered one of the greatest female soccer players of all time.

I went onto Amazon to see if I could buy Jake a Marta jersey, but no dice, unless of course he wants to wear a women’s fitted t-shirt. So, he’ll keep watching with Neymar, Jr., on his back. But if the women’s game remains in his heart, I’ll chalk it up as a win.