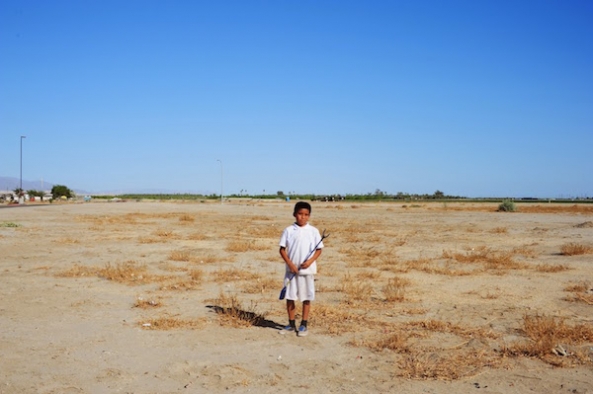 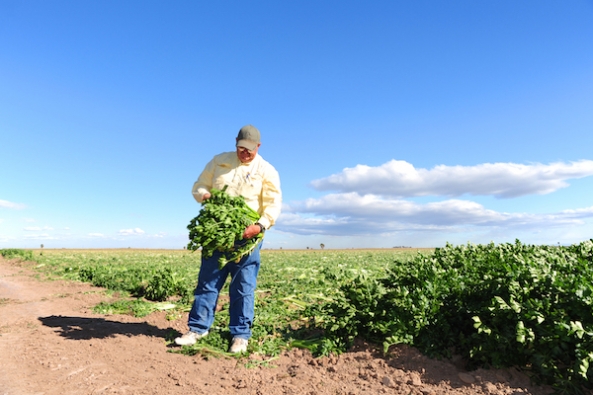 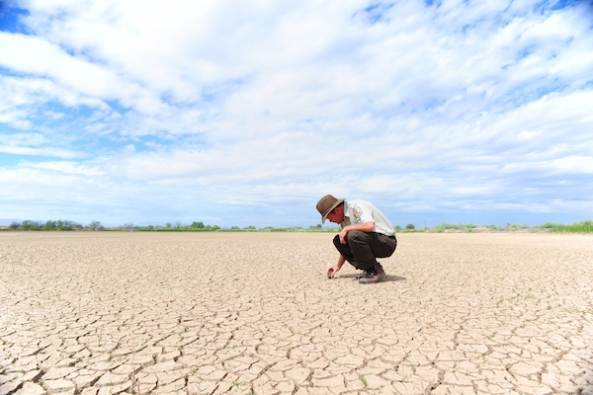 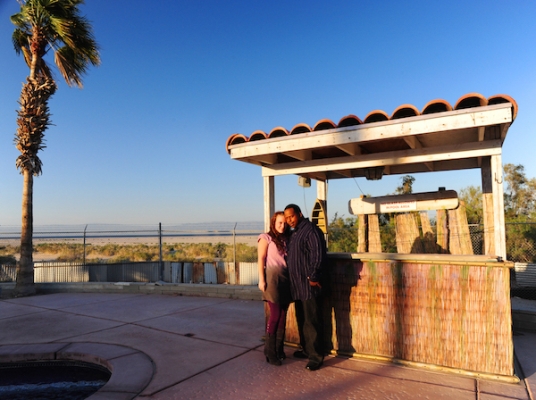 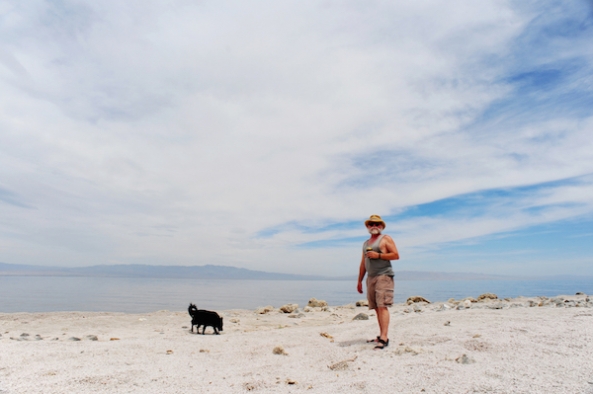 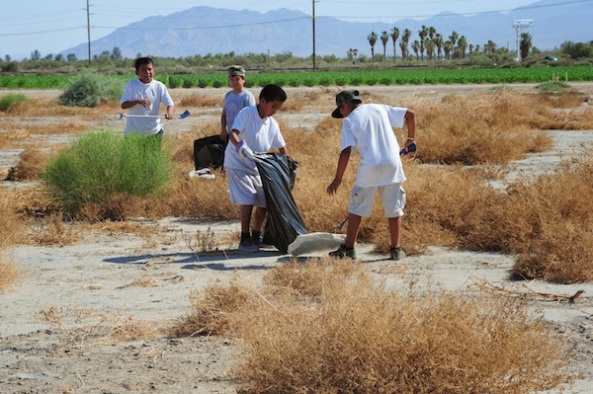 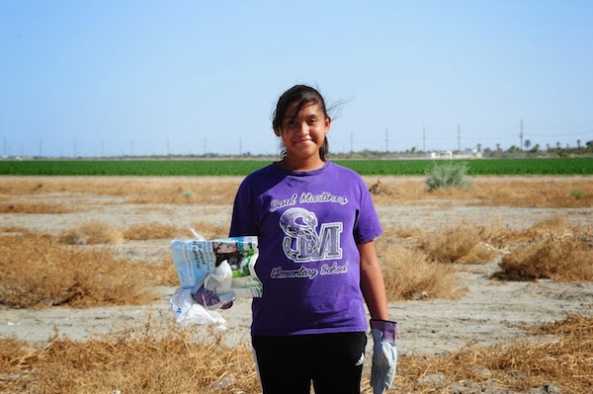 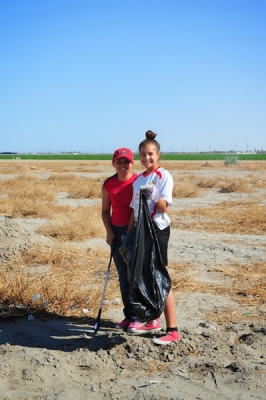 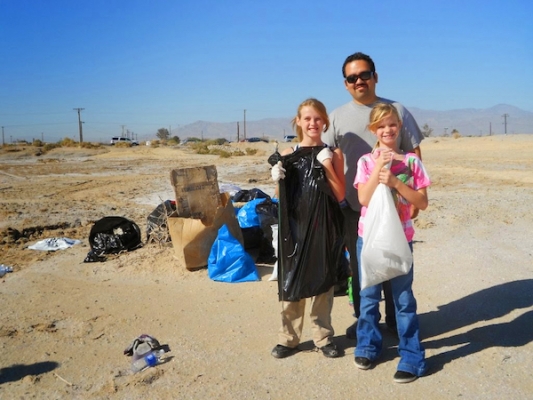 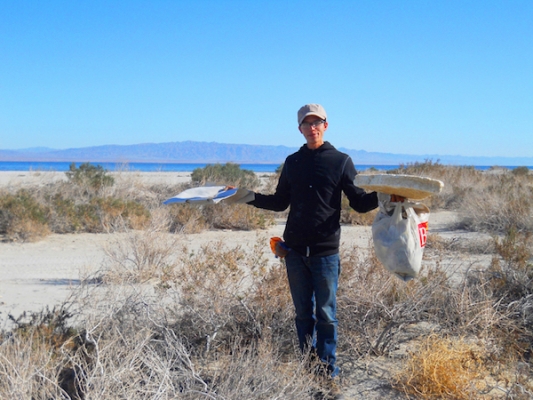 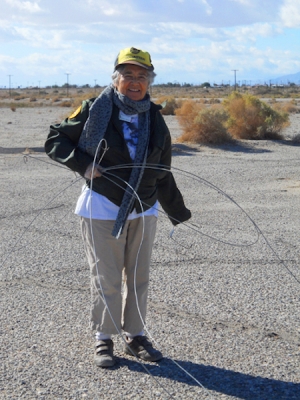 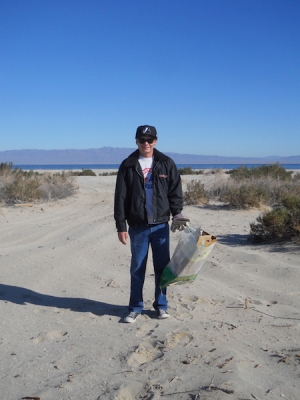 At clean-ups I help organize in communities around the Salton Sea, volunteers are a mix of residents and visitors, of every age and background. Some people drive more than 90 minutes to participate. Teachers like Lorraine Salas and Susan Millan have their students—from El Centro at the southern end and Thermal at the northern end—join in. Elementary school kids come together armed with picker-uppers, gloves, and a positive attitude, run around the desert brush and along the shoreline, try to outdo each other. Cleaning up around the sea teaches you about stewardship, the importance of recycling and environmental awareness, how communities shape the sea, and how the sea shapes communities.

I first encountered the Salton Sea by accident on a cross-country road trip in the summer of 2005. After the trip, I tried to learn as much as I could about the sea and the people who live near it, but the available online research was unsatisfactory and outdated. Books were very expensive and hard to obtain. So I returned. Less two years after my road trip, I left London for the Salton Sea.

Since then, I’ve collected the stories and photos of my neighbors. Living here can inspire them. Jeni Bate, an artist from Salton City, paints skies and clouds from her back porch. Norm Niver, a musician now in his 80s who has worked to save the sea since the ’70s, lives in Salton City in a small house perched on the banks, a boat dock jutting out over the water with a chair in position for five o’clock martini time.

I still remember the first person I spoke with, a fisherman whom I met in Desert Shores during a fish kill back in February 2007, during my first visit. He expressed his anger with the politicians and organizations that could have done something to prevent the sea from faltering, from drying up, but haven’t. That frustration—that we have been abandoned—is a common sentiment. I’m in awe of all the residents who have sat for years in meetings, and can list all the excuses they’ve heard from governmental agencies for why their communities received so little.

A significant issue is dust. The sea is drying up and needs to be kept wet to minimize the amount of dust particles that float into our air when it’s very windy. Our fear is that, as the water levels drop, the dry playa, which contains toxic dust and chemicals, will be airborne and breathed in by residents near the sea. Wind events are frequent and cause visibility to drop dramatically. Neighbors’ houses disappear behind the walls of sand and dust. Dust tornadoes have ripped across the nearby desert, pulling up lose sand. Particulate matter, such as fertilizers, pesticides, fungi, arsenic, and other heavy metals, become airborne, entering our respiratory systems. Previous wind events have shown that particles can reach as far as Los Angeles County. Already, levels of asthma and other respiratory ailments are far above what they should be. Two out of five children have asthma in Imperial County.

Resolving the problem is complicated; scientists are figuring out how to solve some of the sea’s problems with water quality and keeping the sea from drying up and leaving behind a toxic playa. Scientists are also battling with how to contain the hydrogen sulfide, which can also make residents very sick. At risk are the lives of the residents at the sea, as well as in regions farther away, such as L.A. County, and the teeming wildlife. To do nothing would be disastrous.

So we do something—gathering to clean up. This region is prone to high winds that pick up discarded trash and blow it around the region, filling the air with plastics and paper. These items get caught in desert flora, are picked at by wildlife, and float in the Salton Sea, where fish and birds can get to them. There is a lot of illegal dumping and that needs picking up too—before the animals and wind get to it.

It’s not clear to us who should be responsible for picking up the illegally dumped material. But no one will take responsibility, so we do.