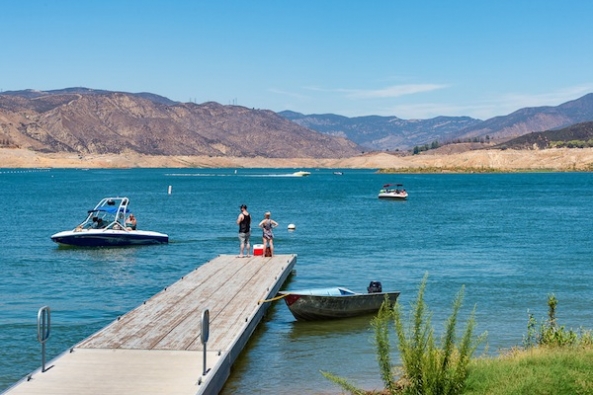 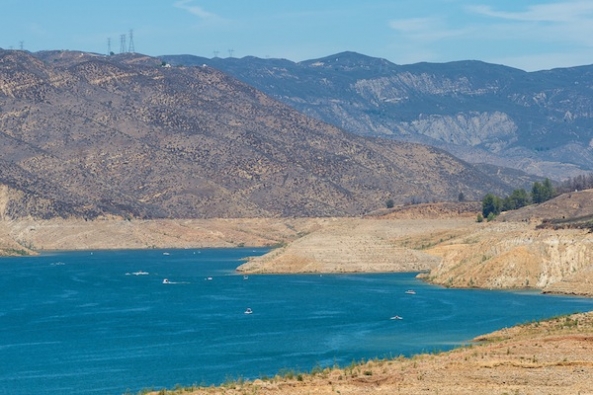 Lake Castaic is 39 percent filled and its water levels 90 feet below a full pool. 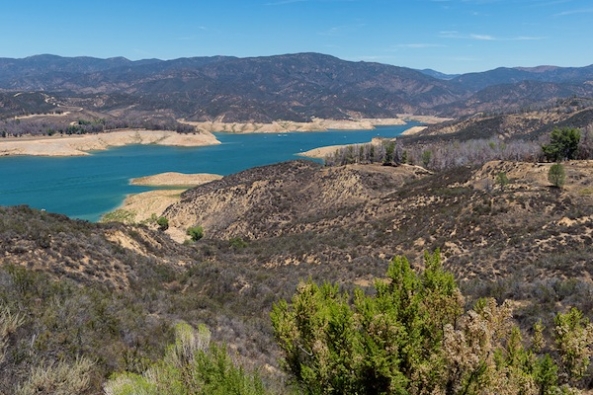 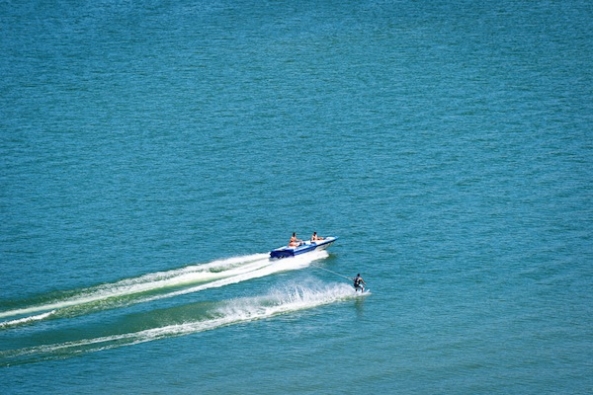 Room for water-skiing at a shrunken Castaic. 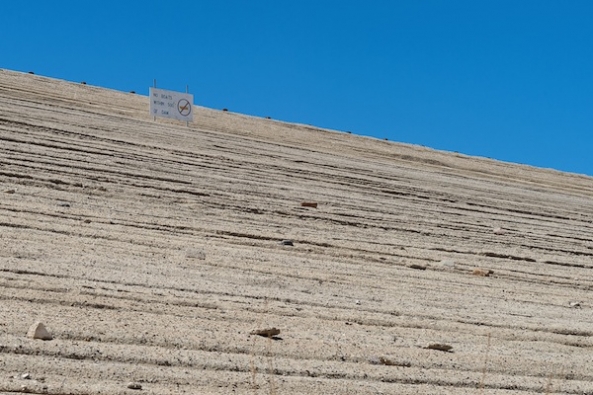 A sign warning boaters way above the water level at Castaic. 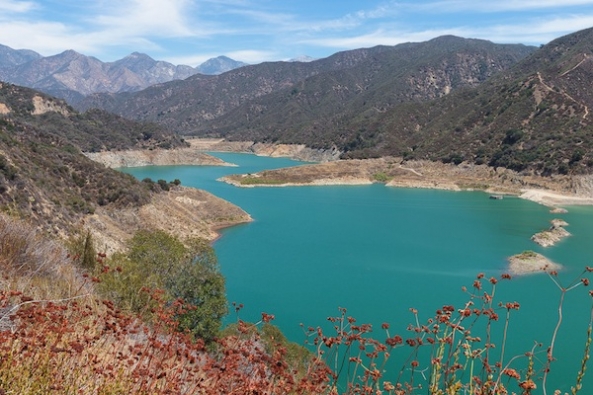 The San Gabriel Reservoir above Azusa is 18 percent filled. 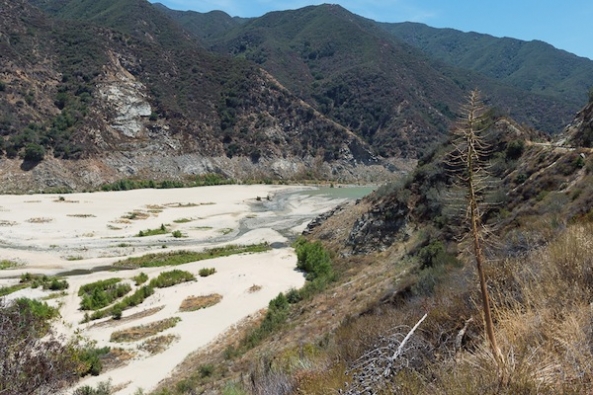 A trickle from the San Gabriel River flows into the reservoir. 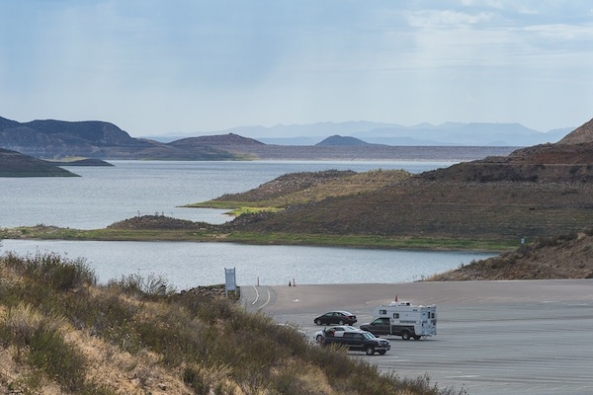 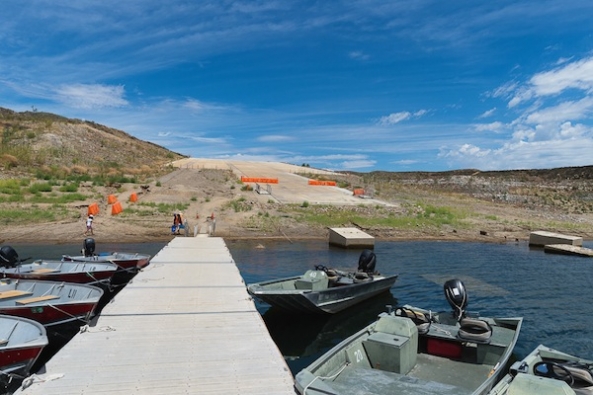 The boat ramp at Diamond Valley is no longer long enough. 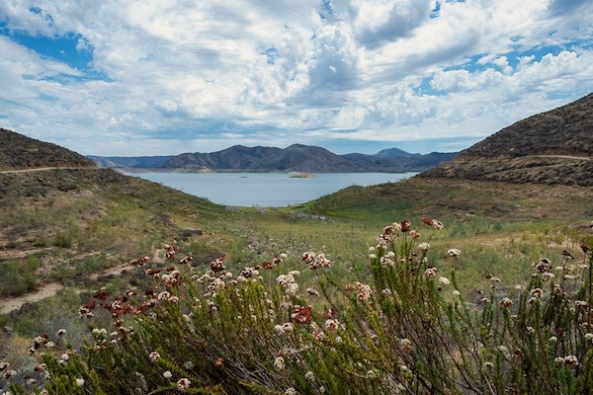 A trail winds around an empty bay at Diamond Valley Lake. 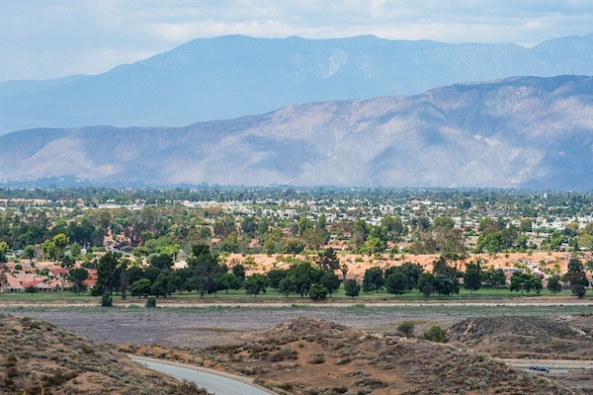 The suburbs of Hemet rise outside Diamond Valley Lake. 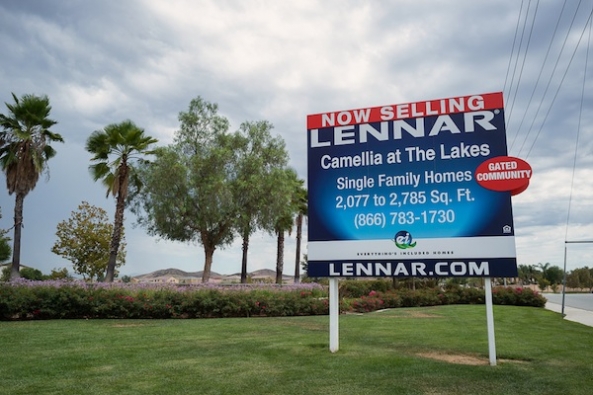 On a recent trip to Wyoming, I was talking to one of the locals about the drought back home in Southern California. She had heard that it was so bad that people were going to communal showers to bathe.

No, no, no, I replied. In fact, it was business as usual back home except for some lawn-watering restrictions. I also told her that it’s easy to walk around many lush neighborhoods in L.A. and not even know there’s a drought.

With that conversation in mind, I recently visited three reservoirs in our region to see firsthand how some of our water supplies were holding up. I had seen the pics of the big, depleted reservoirs in Northern California. I was curious if the situation here seemed as dire.

First stop: Castaic Lake, north of Santa Clarita, where I got my first hint at an answer: There was a long line of pickup trucks towing motor boats, waiting to pay at the entrance.

At first glance, Castaic certainly has a serious case of ring-around-the-collar due to dropping water levels. On the day I visited, the lake—which gets its water from Northern California via the State Water Project—was at 39 percent capacity. That’s less than half its usual level for this time of the year.

But still. It’s hard to watch dozens of boats criss-cross a lake with 40 billion gallons of water and feel the need to hit the panic button.

A few days later, I pointed the car east toward the Inland Empire. Numerous electronic message signs on the freeway reminded motorists stuck in our region’s never-ending traffic problem that we also have a “serious drought” problem. The chutzpah of the signs is admirable.

After 95 miles and five freeways through sprawl that showed no signs of quit, I arrived in Hemet and Diamond Valley Lake. The reservoir occupies a giant valley to which three dams were added to form a giant bathtub to store water in dire times—you know, drought, earthquake, or some as-yet unimagined disaster.

This is despite the fact that Diamond Valley is presently at 40 percent capacity, the lowest it has been since it was first filled in the early 2000s. The lake has also fallen below the bottom of its boat ramp, meaning private boats can no longer be launched.

Alarming? Sure, but let’s put all of this in perspective. Diamond Valley is a lake that still contains 105 billion gallons of water. And many billions of gallons of water in other reservoirs are scattered across Southern California.

Despite much prodding from the media, water officials have been loath to say we’re going to run out of water on such-and-such date. One reason is that water supplies in California are a moving target with so many different water sources in different places. Officials also point out that conservation can still save more water and the region has saved a vast amount of water in reservoirs and underground aquifers for times like these. And of course, the National Weather Service last week said there’s a 90 percent chance El Nino may happen and bring the rains and snows that would help erase some impacts from the four-year drought.

After leaving Diamond Valley, I drove by the many new homes and sprawl of places like Hemet and Menifee. These relatively new places raise the question (again) of whether our region will ever have to pay the piper when it comes to growth and water. But it was stinking hot out and I needed a break. I stopped at a Panda Express in a new mall, grabbed an icy Coke, and aimed home for a nice refreshing shower.