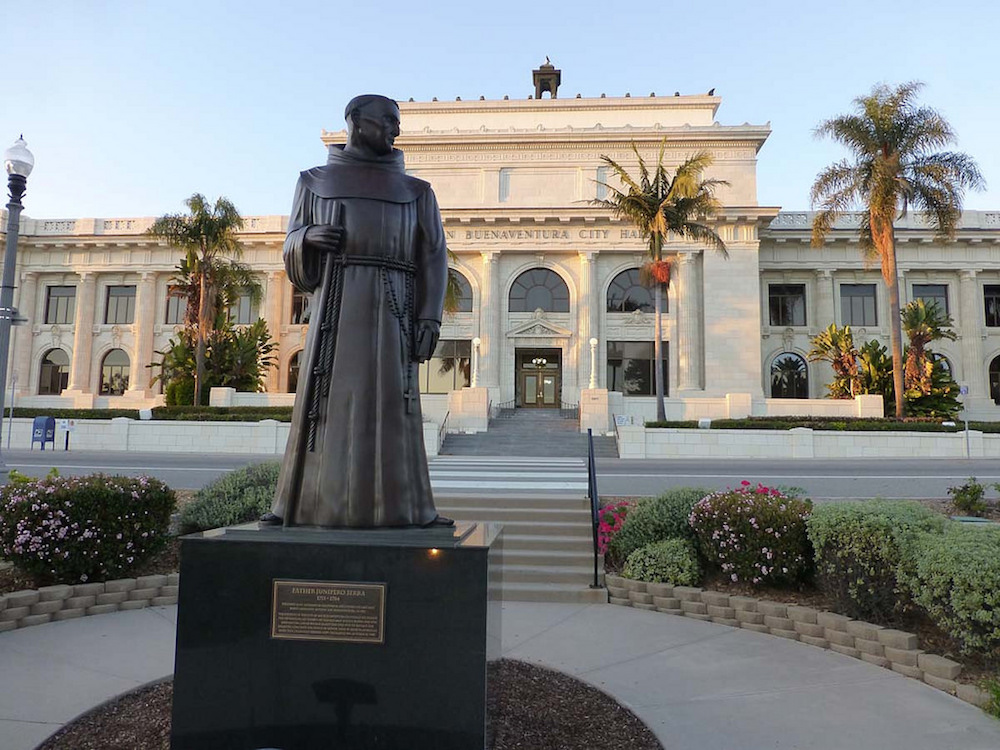 Could sainthood be bad for Junipero Serra’s reputation?

Serra has long been a singular figure in California, widely called the state’s “founding father” for the Catholic mission system he started in the 18th century. Schools, parks, roads, and even one of the state’s most beautiful stretches of freeway (I-280 from Daly City to San Jose) were named for him. California schoolchildren are still taught the story of the missions he founded.

But next week, Pope Francis is scheduled to canonize Serra at a ceremony in Washington, D.C.—a designation that will make the Franciscan missionary one more saint in a church with thousands of them.

Could sainthood make Serra into a more explicitly religious figure—and, in time, a lesser one? California is an increasingly secular and diverse place, not territory where the story of an evangelizing colonizer like Serra should naturally wear well. And California has long been a place that forgets its saints, even those whose names grace big places. Quick quiz—do you know anything at all about the saints honored by Santa Barbara, San Diego, or San Luis Obispo?

At the very least, Serra’s canonization should make clear that we needn’t treat the man as a secular founding father of California. As I re-read accounts of Serra’s life this summer, his religious devotion stood out as his defining trait. Steven Hackel’s terrific biography of Serra portrays an almost supernaturally religious man with a relentless focus on evangelizing up and down California, despite health problems that made travel very painful. He spent nearly every day trying to save more souls—establishing nine missions in California and baptizing 6,000 Indians.

And Serra, perhaps with head and heart already in heaven, didn’t let worldly matters get in his way. He got rid of Spanish soldiers who slowed his religious work. When Indians attacked the San Diego mission and killed three Spaniards, he advocated mercy for the Indians (who were potential converts after all) and argued that the blood spilled would merely enrich California’s soil for evangelization.

But—for all the power of his faith—it’s also fair to say that Serra’s work as an administrator, builder, and developer was a failure. His mission system was supposed to serve Indians, but it was a disaster for them. He may have saved some of their souls, but native Californians lost culture, communities, food sources—and lives. Tens of thousands of Indians died in the mission system, mostly from disease; 25,000 of the dead were young children.

For all his religious fervor, when it came to temporal matters Serra was—to put it charitably—out of touch, ignoring the miseries of others. He made little effort to understand the culture or customs of the Indians. And he was no democrat. When Governor Felipe de Neve, who wrote that Serra treated the Indians worse than slaves, sought to establish local governance and elections in the missions, Serra blocked him.

“He knows how to feign compliance in matters put before him, as well as how to avoid it,” one Spanish governor complained of Serra. Another governor called him “that pig-headed father.”

And, contrary to popular mythology, Serra did not found our state. The real impact of his mission work was to clear away much of native California so that future Californians had a freer hand to build as they wished. The state of California that we live in today began long after Serra’s death with the Gold Rush, and was re-founded by waves of wealth and migration, driven by oil, mining, war, aerospace, weather, and the lure of our cheap, high-quality higher education. The most important network of institutions in California history is our system of public universities, not the missions that were revived and preserved by generations after Serra’s death.

Serra’s sainthood is a worthy tribute to the work of these preservationists. But Serra himself should be considered merely the first of many uncompromising missionaries—the latest might be billionaire environmental evangelist Tom Steyer—seeking to bend this big state to their visions. Such grand schemes never go as planned.

Serra’s new sainthood, and the controversy over it, is good for today’s California, and we should thank Pope Francis for both. The controversy, in particular, suggests that we might move to a more mature understanding of the mission period, and that we might eventually recognize that Serra, even as he receives a sacred promotion, deserves a demotion in our secular histories.

One positive sign: An effort is underway to replace the statue of Serra in the U.S. Capitol—each state gets to have two statues in the Capitol (our other one is of Reagan)—with a far more admirable and representative figure, astronaut Sally Ride, the first American woman in space. Sexual politics are helping drive this—Ride, who died in 2012, was gay—but the best case for replacing Serra with her is that she embodies the secret sauce of California’s success: our faith in science. (I also suspect Reagan is destined is to be supplanted by a more politically correct secular saint, like Cesar Chavez or Steve Jobs).

Legislation to make the switch from Serra to Ride was shelved this summer—in deference to the Pope’s visit this month—but it should be revived before too long. Perhaps after Gov. Brown, who once studied to be a priest and has spoken against the switch, leaves office in 2018.

Serra may deserve his reward from his Catholic employer, but we don’t need to keep honoring him as a hero for all Californians. Here’s praying that his sainthood proves to be a moment for us to correct the record. This state had no founding father. We had founding impulses. We had greed. We had ambition. We had crazy dreams.

And now we have a saint. Let’s leave it at that.