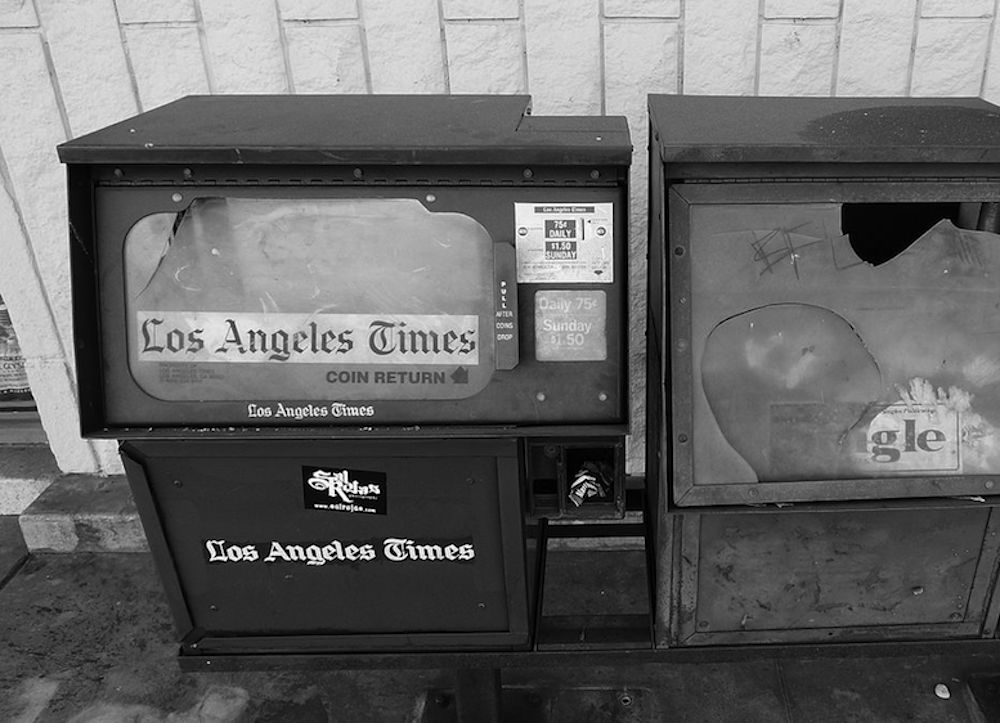 The most important political campaign in California has died prematurely, and without a proper obituary.

That sad fact speaks volumes about the challenges facing our state’s media. Because the deceased campaign wasn’t for a Senate candidate or for a ballot measure. It was a campaign on behalf of the Los Angeles Times.

The campaign didn’t get very far. In September, Tribune Publishing, the Chicago media company that owns the L.A. Times, unceremoniously fired the campaign’s chairman, Times publisher Austin Beutner, after a year on the job. The firing of Beutner from a job no one has been able to hold for long in recent years may have been predictable: Beutner, a former investment banker, had no previous experience in media, but had short stints as a mayoral candidate and a deputy mayor under Antonio Villaraigosa. But his dismissal touched off controversy. Beutner’s supporters portrayed Tribune (once again) as distant meddlers in the local paper, and Beutner as an advocate for local journalism (who might return if the paper were sold to L.A. billionaire Eli Broad). Tribune executives, who didn’t want to sell to Broad, countered that Beutner was a big spender who couldn’t meet companywide financial targets.

Where might the Times have headed under a few more years of Beutner?

Lost in this L.A. vs. Chicago controversy was the question that should matter to Californians: Where might the Times have headed under a few more years of Beutner? And it’s too bad we never got more of an answer to that question. Because the available evidence suggests that Beutner and his team were in the early stages of an effort to transform the Times into the linchpin of a larger statewide civic entity that combined elements of a political operation and a media outlet.

Beutner’s effort was so ambitious—he had created an entity called the California News Group that also included the Tribune-acquired San Diego Union-Tribune and looked eager to add other media outlets across the state—that it was likely to fail. But the effort might have opened doors to a different media future in the state. California’s newspapers desperately need to transform themselves into more ambitious, and more activist civic entities—both to raise scandalously low levels of civic engagement in our communities and to ensure the papers’ relevance and survival.

Beutner, in his own writings and public statements, was emphatic in saying that the Times needed to be much more engaged in California communities and in political conversation. And the team of he assembled at the Times had little experience in newspapers, but would have been a welcome addition to any political campaign: Nicco Mele, well-known for his work with Howard Dean; Ben Chang, formerly of the National Security Council; former Obama aides Johanna Maska and Alejandra Campoverdi; Los Angeles City Hall aide Suzy Jack; and journalist-turned-immigrant activist Jose Antonio Vargas. He also hired another Southern California political player, Renata Simril, as his “chief of staff”—a job title common in government but unfamiliar to publisher’s suites.

Then this newspaper campaign went to work. The Times moved to put on more public events. Money was raised from foundations to support news coverage. Following the practice of political interest groups, the Times began to compile its own ratings—with letter grades—of local politicians. Beutner’s Times, like most modern campaigns (and not a few newspapers competing online), tried to create constituencies for itself, or communities of interest, via more than 20 distinct products separate from the paper (“verticals”) covering everything from food to education to race. In an attention-grabbing bit of pandering, a writer was even hired to cover “Black Twitter.”

Some of this raised eyebrows among traditional journalists. But this political turn for a newspaper isn’t new. It’s a return to the past—and a healthy turn at that.

When American newspapers were at their most influential—in the 19th and early 20th centuries—they were partisan organs that explicitly sought political influence, and weren’t shy about leveraging it. Many were subsidized by political parties, and editors doubled as advisors to elected officials. But those papers were also livelier than today’s papers—and far better at engaging readers and getting people to participate in civic life.

But news media changed in the middle of the 20th century, as the country grew bigger and less partisan. Political parties didn’t have enough money to subsidize bigger media, which instead were supported by risk-averse corporations and advertisers that valued political neutrality. More professional standards of reporting and writing were imposed. In the process, major media became elite organs with better-educated journalists who prided themselves on keeping their hands clean of the dirt of politics. (Confession: this Harvard-educated columnist, a former L.A. Times reporter, was one of them).

But in the past couple decades, the country—and California especially—moved in a different direction—more connected, more partisan, and more polarized. While some Internet publications and media outlets followed the audience down this politicized path, the major newspapers in California mostly kept their distance, and stuck with their cool objectivity. It’s past time for that to change.

If California’s newspapers are to survive, they’ll have to do much more than publish the news. They’ll have to be direct actors in political and civic debates, combining journalism and activism in ways that make their importance indisputable.

Beutner’s team was moving in this general direction, but political mistakes sabotaged the project. Beutner and his team couldn’t successfully manage the relationship with Tribune Publishing. Executives in Chicago, according to news reports, were suspicious that Beutner’s high profile might be the prelude to a run for office (his supporters deny this). Beutner launched a Publisher’s Book Club for readers, wrote frequent short columns under his name, and led a big public event on water with Gov. Jerry Brown. (Beutner’s name was placed next to Brown’s on event signage).

There’s also a question of whether the Times’ corporate, centrist politics under Beutner (pro-business, skeptical of labor, for fashionable reforms in education) were too close to those of L.A.’s political elite. The Times, if it is to survive, must be a political institution that offers ideas and provocations that engage the city—and that would seem to require challenging elites, not mirroring them. How? The Times could develop some class consciousness and champion the city’s working poor. Or it might adopt a libertarian stance and relentlessly challenge the thoughtless assumptions of the unions and Democrats who run the place.

There is a paradox here that Californians must come to appreciate. To engage us and unite us in a civic conversation, you must start by dividing us in ways that create debate and draw people in. And creating division is very difficult in today’s Los Angeles, and in today’s California, because there are no real wedge issues anymore. Big majorities of residents in each major region pretty much agree on big issues—we have sorted ourselves into communities of the like-minded. And so we can stop reading the paper and stop voting, confident that our disengagement won’t matter.

This lack of divides is a looming disaster for California: We don’t have enough of the collisions and conflicts—and resulting connections—necessary to unify and drive change in a big, diverse place. We need great newspapers, institutions, and politicians to identify dividing lines, pose hard questions, and get us arguing, and, yes, thinking anew.

The Times’ aborted campaign felt like a small first step on the path to building the new kind of civic and political media we need. Here’s hoping that our state’s other papers will pursue a more aggressive path and, as the best political campaigns do, stir us to action.