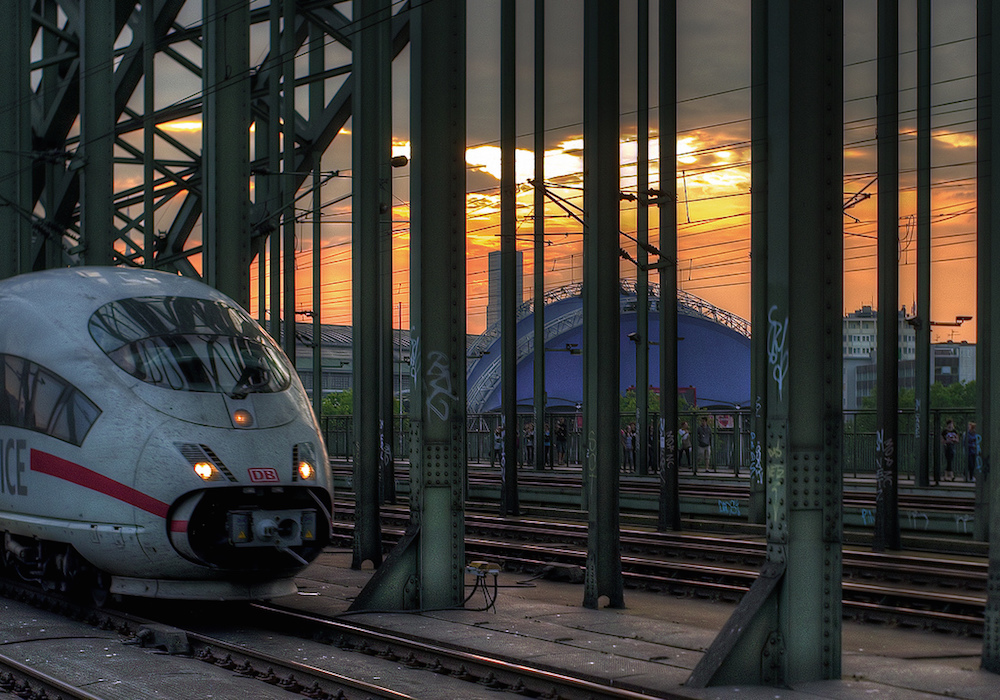 That question is not a joke, as I learned last month while riding Germany’s popular high-speed rail. In fact, it’s a more important question than the ones Californians have been myopically asking for years about the costs, funding, and construction deadlines of the state’s controversial project.

The value of high-speed rail does not lie in the cost or speed of trains, but rather in the ability of such projects to anchor deep connections—between transportation hubs, between cultural attractions, between cities, between job sites. And German high-speed rail, while far from perfect, excels at creating fast and efficient connections.

The secret is in German stations, which serve not only as hubs for various types of transportation, but also as vital public spaces that connect a variety of institutions and provide space for people to gather, shop, and be entertained. (The Leipzig Main Station even has a pet store and a supermarket). Many stations are built as bridges—over railroad tracks, highways, or other barriers—so they literally connect different parts of cities.

If California high-speed rail can reproduce the German style and create a system that deeply binds the state together—and that’s a big if—then even a $100 billion project might be a bargain. But if high-speed rail can’t connect different modes of transportation, if it can’t create stations that are destinations in themselves, then the worst predictions of high-speed rail critics—that this is an epic waste of time and money—could well prove true.

Eric Eidlin, a community planner with the Federal Transit Administration office in San Francisco, explains the importance of connections in a must-read report for the German Marshall Fund that compares California’s plans with high-speed rail systems he’s studied around the world, particularly in France and Germany.

That’s useful because one way to understand California transportation today is that we are too French. We have split up transportation between a motley mix of competing agencies that don’t cooperate well or integrate different modes of transit. One result: France has built a high-speed rail system that runs faster than Germany’s, but isn’t as good at connections because too many stations are too far from people and attractions.

Many German cities have integrated rail station planning with the planning of their city centers, and Eidlin’s report praises Fresno for doing the same, by considering its high-speed rail station as part of a remake of Fulton Mall. By the same token, the report warns Bakersfield about putting its station outside downtown and away from its existing bus and rail station; this would be a lost opportunity for connection.

Eidlin’s report argues for a comprehensive approach to link as many things to high-speed rail as possible—both for the sake of the trains and the communities they will serve. This means making it possible to buy tickets for high-speed rail and other modes of transportation in a single reservation, as one can do in Germany. It also argues for “blending” high-speed rail tracks with other kinds of trains—an aspect of the California proposal that has been criticized for slowing trains down—so they can use the same station platforms and make transfers faster. (This would work well at L.A. Union Station and San Jose’s Diridon station, he writes).

The ideal, from the report, are center city stations where connections are “as simple, short, seamless, intuitive, and pleasant as possible.”

I got my first taste of German-style rail connections last month after landing at Frankfurt Airport. I needed to get to Cologne, which is exactly the same distance as the trip from Los Angeles to San Diego, which I often make on Amtrak.

As it turns out, the Frankfurt to Cologne section of Germany’s ICE high-speed rail service is considered a good model for what California wants to do, since it is a relatively recent construction and has some steeper gradients.

A one-way second-class ticket cost me 62 Euros, or $68 (more than the usual walk-up fare of $37 on Amtrak to San Diego). The ticket agent advised me it would have been much cheaper if I had booked in advance at the same time I made my airplane reservation.

My Amtrak trips to San Diego take just under three hours. The equidistant ride from Frankfurt to Cologne takes 56 minutes. The train was on time, and, on a weekday afternoon, nearly full, with people of all ages, mostly in business clothes. The train, which had originated in Munich, was also a little dirty with trash in the seatbacks—just like on Amtrak back home. And the café car was just like Amtrak—bad food at bad prices. On the good side: a woman rolled a cart through the train to sell coffee, water, and pastries, and there were more and cleaner bathrooms than you find on Amtrak.

The real difference was the speed, and—confession—I was a little spooked. The ride was smooth, but there was just enough of a rattle to produce anxiety; it was unnerving how much faster we were going than the speeding cars on the Autobahn, which was visible for most of the trip. And on turns, it felt—at least to this high-speed rail rookie—like the train was going to take off like a plane.

The train itself also psyched me out. At the end of each car were screens showing our speed. I freaked a little when we reached 300 kilometers per hour—or 180 miles per hour. (I’ll need training to handle the California version’s top speed of more than 200 mph).

The first stop was Siegburg/Bonn, a station that was the product of a political compromise, serving the two cities of its name. It was a bustling place with connections to multiple local trains and buses, as well as restaurants and a movie theater. Cologne’s station was much bigger—with the size, feel, and retail offerings of a small Los Angeles mall—and right on the Rhine. The station was located just a few steps from the Cologne Cathedral, a Gothic masterpiece from 1248. The many hotels, museums, restaurants, and office buildings of central Cologne were all within walking distance. The station pulsed with big crowds of people.

High-speed rail doesn’t require saintly public officials; Cologne is famous for its corruption and political intrigue (while I was in town, a woman was elected mayor from her hospital bed after being stabbed in the neck by an anti-refugee lunatic). But high-speed rail does require smart governance, coordination and collaboration between different agencies and cities, and a comprehensive vision for transportation hubs as public spaces.

The bad news: Governance, collaboration, and public vision are hardly strengths of today’s California, and our current debate over high-speed rail focuses too much on making things cheap and unobstrusive. This is a recipe for failure.

The good news: High-speed rail offers us a chance to develop our capacities, and create new visions for connecting our state. And if we struggle with those tasks, we can always import Germans to show us how it’s done.