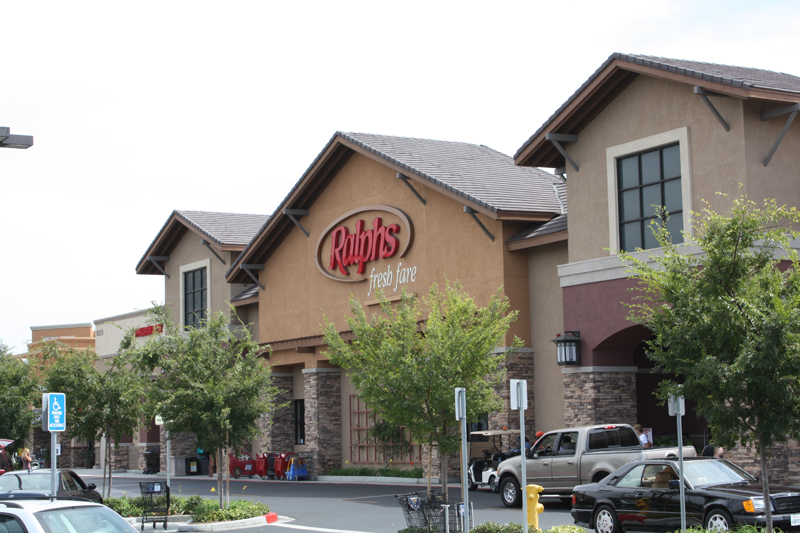 In 1926, Los Angeles grocer George Ralphs opened the first supermarket. His property diverted from many of standards of the time, offering off-street parking, a selection of fresh meats and produce, and an environment amenable to middle-class women.

Nearly a century later, Ralphs’ creation has become a quintessential institution of American capitalism, representing national abundance and insatiable material desire. Yet for such a central part of daily life, Americans know very little about how the supermarket as a retailing concept came to be. Nor do we fully understand how Los Angeles’ retail scene continues to shape our edible future.

Although other grocers would claim to have invented the supermarket concept, the credit belongs to Ralphs. He already owned a chain of “drive-in” groceries attached to gas stations, which offered items from flour to canned vegetables. Drive-ins first appeared in Los Angeles during the 1910s as a solution to one of the more complex problems of early 20th-century retailing: automobiles. As the cost of purchasing a car fell because of Henry Ford’s assembly lines, all municipalities, regardless of size, struggled to deal with basic questions like parking, and ensuring that horses and street vendors could coexist with the new technologies. This problem was especially acute in Los Angeles, where as many as one-quarter of the city’s residents owned an automobile by 1920. (At the time, barely one in 20 New Yorkers could say the same).

Consumers struggled to use their cars to run daily errands—there were simply too many. At the beginning of the 20th century, shopping was broken up among different vendors. One would get their vegetables from a standalone green grocer, their bread from an independent baker, and their flour from chain groceries like the Great Atlantic and Pacific Tea Company (which was, at the time, America’s largest retailer, primarily selling dry goods). People could not simply park a car in a crowded urban neighborhood and buy everything they wanted at once.

The drive-in grocery tried to balance this by pairing stores with the architectural partner to the automobile, the gas station. Drive-ins were marketed to the affluent white middle class, who had an overriding concern for cleanliness and respectability. But some white Angelenos struggled with the reality that they were purchasing their food in a glorified gas station. Persuading those shoppers to buy meat or apples only a few feet from mechanics performing oil changes or drivers filling up trucks with gasoline was no easy feat. Some grocers, especially Ralphs, tried to distract shippers by adding new services like butcher counters and baked goods displays. Others used gaudy architecture—Los Angeles drive-ins frequently included features like Spanish-inspired façades or windmills inspired by Cervantes’ Don Quixote.

The conflict between convenience and respectability gave birth to the first supermarket as Ralphs new store combined many of the features of a drive-in without any of the drawbacks.

At almost 10,000 square feet, the new property was much larger than Ralphs’ drive-ins, offering a larger selection of produce, meat, and dry goods in sizeable departments. Most importantly, the new store was built as a stand-alone, warehouse-like structure beside a large parking lot. Unlike grocery stores, it was not tucked into residential neighborhoods or attached to other commercial structures.

Ralphs architects were keenly aware that they had embarked on a unique project, and designed the property to give routine shopping some of the drama of the stylish department stores downtown. The supermarket stood as a bridge between the urban core and the suburban home. The home economics columnist for the Hollywood Daily Citizen, Harriet Burdsal, captured this mood, comparing Ralphs’ creation to a “marketplace of Rome, where Phoenicians came to peddle their bright silks and bits of treasure from afar.”

Soon, Ralphs had imitators across Los Angeles and eventually the entire United States. Supermarket retailing proved to be an ideal fit for Great Depression-era consumer culture, though in unexpected ways. In the early 1930s, East Coast retailers took Ralphs’ concept of a stand-alone food emporium and combined it with discount shopping, opening what were effectively warehouses selling cheap food to beleaguered working class consumers. In effect, these stores were retail barns, often set up inside disused warehouses and factories and stuffed with items bought from cash-starved distributions desperate to move stock. Often, this meant that auto parts and basic housewares shared shelf space with potatoes and celery, reviving some of the tensions that led to Ralphs opening his first supermarket.

Stringent price regulation also drove the shift. During the early 1930s, federal and state governments put in place a series of new laws meant to regulate big business. This included directives on pricing and licensing fees based on how many properties a company owned both nationally and in a particular market. Established grocery corporations turned to the supermarket concept to skirt these regulations and recapture customers lost to other, more innovative retailers. Foremost in the minds of those making the transition was the brute economics behind closing hundreds of properties subject to heavy taxes and burdensome regulations and opening only a few, streamlined stores in their place. New supermarket chains would thus be subject to less oversight and able to contribute less into public coffers.

The biggest of new supermarket operators was the Great Atlantic and Pacific Tea Company—otherwise known at A&P—the Wal-Mart of its time. At the beginning of the 1930s, A&P owned more than 15,000 grocery stores nationwide but these properties were sadly outdated, offering few of the conveniences of Ralphs or the saving of East Coast warehouse stores. Sales declined from nearly $1.2 billion in 1929 to only $650 million in 1936. Some executives in the company worried that the retailer was dying. Hoping to reinvigorate the business, A&P’s president decided to shutter thousands of his properties and reopen some as supermarkets, modeled closely after the retail palaces built by Ralphs in Los Angeles. There were perhaps no more than 300 supermarkets in the United States in 1937 when A&P began this transition, almost all of them in Southern California; by 1940, there were as many as 8,000, all over the country. A&P owned half, building stores in cities like New York and Philadelphia inspired by Los Angeles’s retail scene.

The Los Angeles model was especially appealing to companies like A&P because of the ways that Ralphs and other local retailers tied the supermarket to the social aspirations and culinary tastes of the city’s suburbanizing white middle class. Looking for a sanitized and highly curated environment, homemakers flooded stores, especially after World War II, drawn in by the promises of modernity and abundance.

The habits of Los Angeles consumers still influence the way all Americans purchase their food. In only a few months, Whole Foods will open one of the first of its value-oriented stores, called 365, in the city’s hip Silver Lake neighborhood. Primarily aimed at cash-strapped but socially conscious millennials, these stores will offer some of the products Whole Foods is famous for, such as organic meats and specialty produce, along with a wider range of everyday consumer items priced below the items found at Whole Foods.

Unlike other possible test beds, Los Angeles offers the sort of economic and cultural diversity lacking in cities like New York or San Francisco. Alongside the Silver Lake hipsters are the remains of working class enclaves whose residents faithfully patronize more mainstream options like the ageless Ralphs (now owned by large Kroger corporation).

Ironically, Los Angeles is perhaps the last major American city that has not seen widespread gentrification and rising rents push out low-income residents. (Compare it to New York here.) This has forced retailers in Los Angeles to find ways to satisfy groups of people seeking bargains instead of higher-end, often more environmentally conscious, products. If the 365 store can draw those shoppers in alongside the tight-jeans set, it would transform a brand thought of as “whole paycheck” into something that appeals to a larger portion of the American population.

If successful, this new concept will eventually find a place in communities across the United States. This will only happen though, after Los Angeles shoppers have their say.