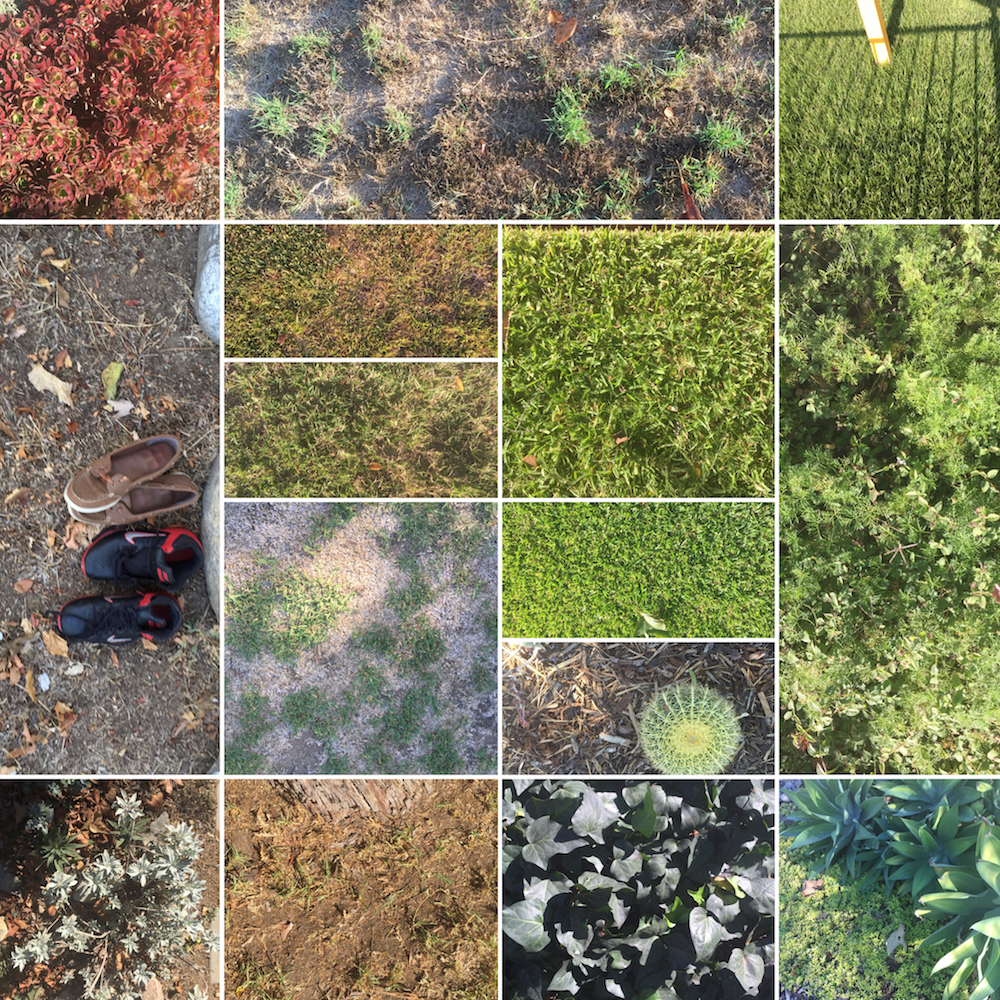 Sometime during the last-blast furnace heat of September, as I made my turns on foot around my San Gabriel Valley neighborhood, I began to take careful note that the term “conservation” was widely open to interpretation.

Evidence was everywhere. Street to street, lot to lot. Each week, I’d push a little farther outside my core neighborhood, comparing and contrasting.

Many residents let their square of lawn “go”—in a come-what-may fashion that seems optimistically to believe that brown will one day be green again.

Others chose to take matters into their own hands. I watched early-adopters embark on elaborate, months-long transformations, removing turf, transporting earth, tarping lawns, designing intricate new ground cover—not wanting to gamble on the vagaries of Mother Nature. As weeks passed, I’ve been taken by the range of improvisation among these remade yards: blasts of color and texture, hay-yellow patches, haphazard rock gardens, dirt and dandelion weeds.

Just as prominently however—and often side by side—I’ve also observed a renegade pack: lawns as green and moist as a tony golf course. Sturdy St. Augustine turf. Fragrant just-cut Bermuda grass. Lush, tangled ivy. Pressing farther, I might pass through not-so-hidden glades where an oscillating sprinkler geysers during the high sun of late morning (or where the stutter-hiss of automatic sprinklers kicks in—twice daily!—under the cover of early-morning darkness).

As a native Angeleno, I’ve lived through what we used to call “dry spells.” “A quick dry patch,” we figured. In the back of our minds, we knew it wouldn’t—couldn’t— go on forever. Often then, there were only a few weeks of restrictions; a small accommodation. Because, back then, winter brought relief with—at the very least—a brief season of rain. Now droughts have reshaped the way we both think about the environment and present ourselves to the world.

Front yards with lush lawns, of course, once defined this area—like those old kidney-shaped turquoise swimming pools you’d glimpse as you flew over the region. “Home” meant little patches of green in the front, aqua in the back. That was the indoor-outdoor SoCal lifestyle in one flyover snapshot.

Raymond Chandler once described the idyll as a “half acre of fine green lawn [drifting] in a gentle slope down to the street.” But something else was deep at work in paradise. In a 1957 letter, Chandler wrote to a friend how “the climate has been ruined partly … by too much vegetation, too many lawns to be watered and in a place that nature intended to be a semi-desert.”

More than half a century on, we’re catching up finally with nature’s intentions. The notion of “curb appeal” is shifting. Brown lawns have in some neighborhoods become status symbols of their own— like a compost heap or hybrid car. I hear this from friends across the city—from Silver Lake to Santa Monica. Even in my own neighborhood, curious drivers roll by one neighbor’s magical drought-tolerant garden the same way folks take in Christmas lights—pausing to snap pictures or ask questions. I eavesdrop on conversations as I stand in line at the market or wait for the train about pollinators, unthirsty plants, and wildscape.

Even still, possessing a “little patch of green” means enough to turn some residents into highly visible scofflaws. In my neighborhood, watering days through summer were restricted to two; as of November 1, that was scaled back to one. Polite billboards and placards—warning residents that we are in a severe drought—have been stepped up to fines (from $100 to $500 for repeat offenders). I have to wonder if those risking the penalties are negligent, arrogant, or just deeply attached to a deep-seated, decades-old feeling—an old picket-fence pride. One that boasted to passers-by of lawns to roll on, run barefoot through. Lawns were a way to telegraph one’s pride of ownership.

Nowadays, that SoCal bent to break the rules or be a “maverick”—in this context—reads as intransigence or selfishness. My neighborhood is transitioning like so many others around the Southland—old dreams are catching up to new necessities and demands. I’m watching my own lawn “go”—it’s now a quilt of fading green, yellow, brown, with hard dirt in places where the sun bakes it all day. While I’m still hoping for a season of rains, I know now that is only a temporary reprieve. I’ve yet to formulate a “just-in-case,” alternative plan, but one’s coming—it has to.

As a Southern California symbol of autonomy, that apron of land has always been, it seems, as important as the home that rises above it, emblematic of a life where we hoped to live by our own rules. Our own self-appointed paradise. As we consider our next chapter, the front space may no longer be a finished patch of green—that mantra of “two stories and a lawn”—but it continues to be a dream manifested, hard-won, and well tended.