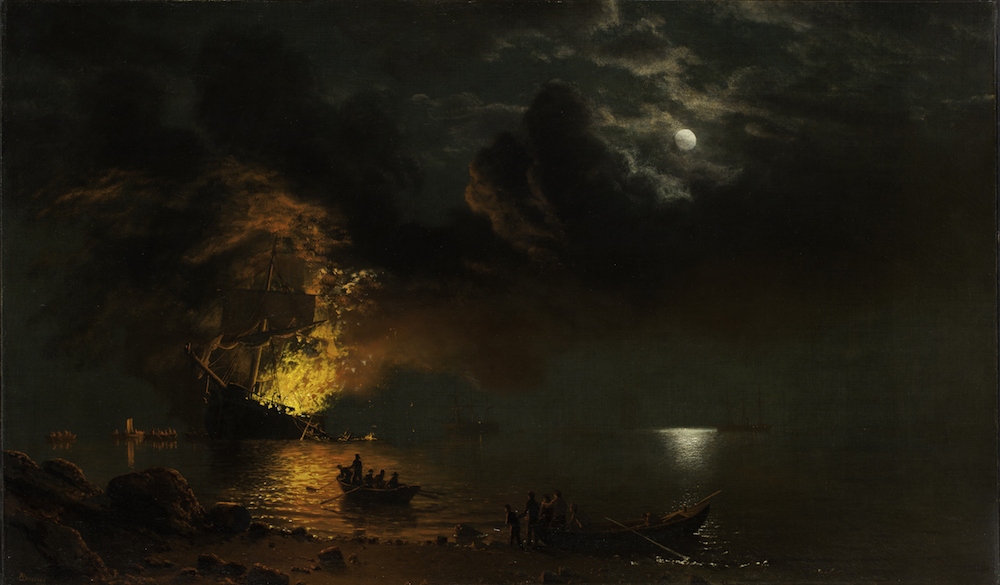 For many of us in the modern world, light at the flick of a switch feels so natural that it’s difficult to imagine a time when even the meager flame of a candle was hard won and too precious to waste. But until the late 18th century, the means for lighting up our surroundings had changed little since the Pleistocene Era, when limestone vessels with their nubs of tallow and wicks of moss illuminated the walls of the cave of Lascaux. Almost all lamps, fueled with animal or vegetable oil, stank and smoked. Their flames were unsteady and difficult to keep. The night, too, changed little during those centuries: Most people in cities and towns stayed close to home after sundown, and not only out of fear of footpads and thieves. Travelers stumbled over wood and coal piles, and fell off bridges and into canals. The night was distinctly its own: immense, unknowable, and nothing like the day-lit world.

The 19th century brought exponential changes in light technology and, in large cities, more reliable interconnected gas and electric streetlamps gave rise to vibrant public life after dark. Not only were the streets brighter; homes, shops, and shop windows became fully illuminated. Hours that had once been furtive and confined offered new freedoms as urbanites socialized, shopped, and even worked after darkness fell. Technological developments and increases in light would continue well into the 20th century, and would profoundly alter society, the sense of self, and the natural world.

One way to comprehend the complexity and scope of this transformation is to look at the way artists responded to the changing night and the accompanying changes in human possibility. A recent exhibition at the Bowdoin College Museum of Art, “Night Vision: Nocturnes in American Arts, 1860-1960”, curated by Joachim Homann, does just that.

The viewer first encounters a series of paintings that testifies to the power and complexity of the full moon, which for centuries had been the most reliable aid to navigation in the night. At the center of these paintings stands Albert Bierstadt’s The Burning Ship from 1869. Bierstadt has given over the right half of the canvas to the full moon: rational, cold, far above human affairs. Its reflection on the water is calm, too, and a far cry from the roil of human history represented on the left side of the painting. A whale ship burns after being attacked by a Confederate cruiser. The flames flare heavenward, uncontrolled and consuming. The escapees look back at what they’ve lost, and perhaps, also, are captured by wonder: There would have been almost no light brighter than that of such a disaster. In the deep shadows behind the conflagration, other ships on the water seem mere shadows navigating the unknown shoals beneath. Their backs are to the moonlight, which offers them nothing now. 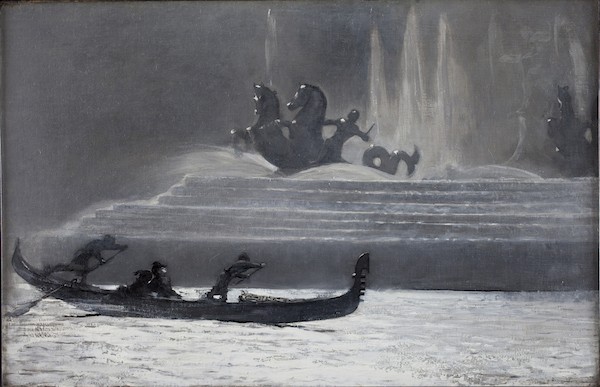 While Bierstadt was painting, the race for a controlled and modest electric light was on, and in 1879 Thomas Edison successfully demonstrated his incandescent bulb, its miraculous filament enclosed in glass, not subject to wind or human breath. By 1893, incandescence was evident everywhere at the World’s Columbian Exhibition in Chicago. There had never been so much human light in one place before: thousands of lamps along walkways, spotlights illuminating fountains and the shores of Lake Michigan, and hundreds of thousands of bulbs tracing the edifices of the buildings. Winslow Homer’s The Fountains at Night, World’s Columbian Exposition was, at least according to his mother, “the first picture ever painted by electric light.” It is as if Homer has painted the unblinking eye of the late century staring into the future. The grave intensity of its blacks and whites and grays increases the viewer’s sense of urgency as you try to fix the gondola racing across the canvas. It seems it is we who are ephemeral; the light will never change.

By the early 20th century, New York City aimed at turning night into day. Edison himself hoped for as much: “Everything which decreases the sum total of man’s sleep, increases the sum total of man’s capabilities,” he once proclaimed. “There is really no reason why men should go to bed at all.” Berenice Abbott, one of the inveterate photographers of New York City between the World Wars, recorded the city in its many aspects. Her day-lit street shots of automats, lemonade stands, tin merchants, and stoop sitters seem of their time—and firmly of the past for us looking at them now. But her Night View: Midtown Manhattan captures both the city then, and the city as it was to become.

To capture the shot, Abbot hung her camera from an upper floor of the Empire State Building at dusk during one of the longest nights of the year: December 20, 1934. Most of the Midtown office windows appear as fully illuminated rectangles, the signature of incandescent light. (By contrast, a candle, as Gaston Bachelard observes, “does not illuminate an empty room, it illuminates a book.”) A viewer can imagine the countless office workers represented by those windows as part of the rational grid of modernity, connected to the lit streets bisecting the view, the traffic on the avenues below. The most consistently dark parts of the photograph are the roofs of the buildings. There is no light from the heavens. It is all emanating from the hive.

Electric light could show the limits of progress, too. Beauford Delaney’s untitled painting from 1944, an intimate street view of Greenwich Village, suggests a New York darkened by the war, and made complex by the poverty in which Delaney and his compatriots struggled. His canvas is both buoyant and threatening. Look once, and you might see a brightly energized world of marvelous color, but one that is also claustrophobic and disturbed by the streetlamps in their insistent steadfastness. Look again, and the streetlamps form their own coherence. The artist Andrea Sulzer sees them as “notes on a page of sheet music,” in harmony with a small, far moon. Delaney’s moon has little resemblance to Bierstadt’s, so high above human affairs. Here it is, at best, part of the same music as the street—no larger than the individual lamps, illuminating no more than they do. 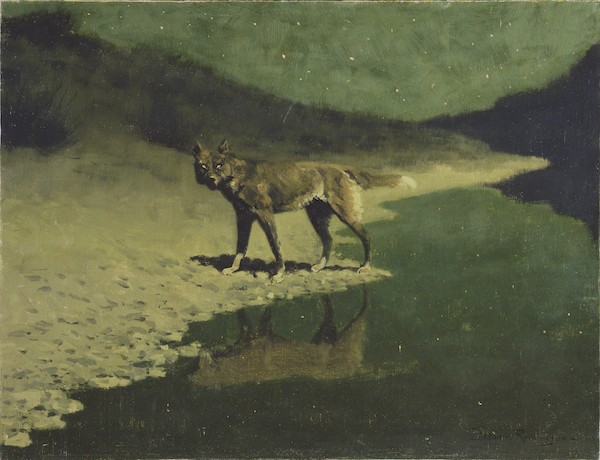 Moonlight, Wolf, ca. 1909, by Frederick Remington. Addison Gallery of American Art, Phillips Academy, Andover, Massachusetts; Gift of the members of the Phillips Academy Board of Trustees.

Night Vision, in charting the changing complexities of light and the new mysteries of the night, also reminds its viewers of the enduring mysteries of ancient night. No painting succeeds at this more fully than Frederic Remington’s Moonlight, Wolf, which he painted around 1909, near the end of his life. There is no moon in the frame, only moonlight, which exposes a landscape threaded between stars and starlight on water. The wolf’s bright stare, fixed on the viewer, seems to share the same substance as the stars: two piercing points, as unpredictable and unreadable as a burning ship. To look back at Remington’s wolf at a time when an excess of light obscures the stars and makes it difficult for night hunters to see their prey, is to stare into an eternal immensity. Old night, make no mistake, has not left us.