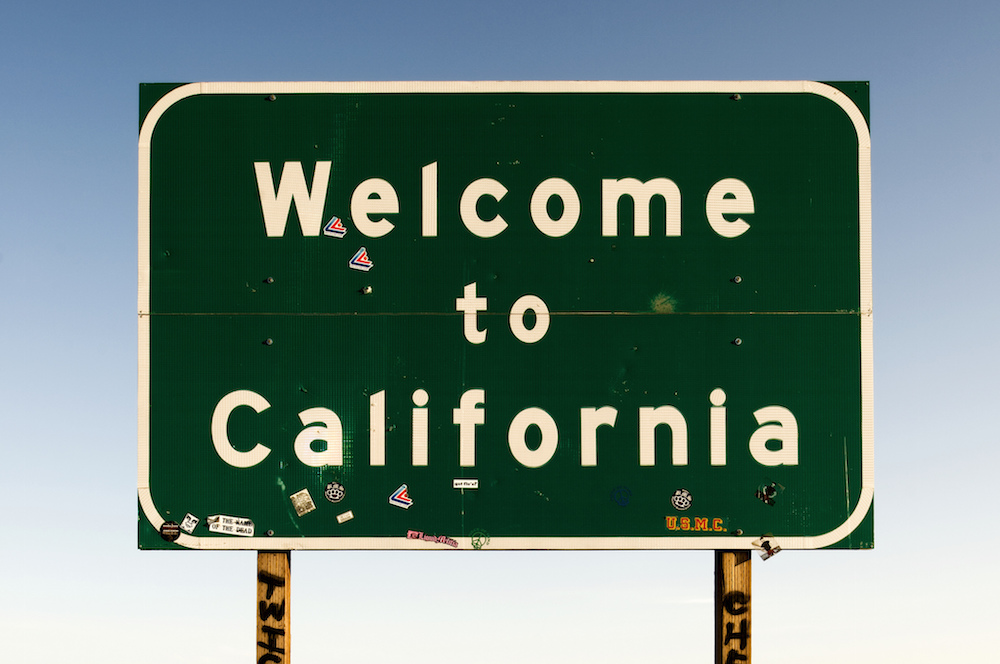 You can’t define an entire state by its borders. And that’s a good thing for California. We wouldn’t much like what our borders say about us.

Take the California-Oregon border. When you drive over the Siskiyou Pass on Interstate 5 and cross from Oregon into California, you will not be greeted by any welcoming party, grand gate, or museum that extols the glories of the Golden State.

No, the first sign of California civilization is the giant All Star Liquors store, in the tiny community of Hilt. And if you prefer a different coastal entrance into California from Oregon along the 101, you’ll get the very same greeting: All Star Liquors’ other outlet, in Smith River, near an Indian casino.

The store’s slogan? “The Party Starts Here.” Except, at California’s borders, the party starts slowly.

Over the past year, I’ve made a point of exploring California’s four land borders—with Oregon, Nevada, Arizona, and Mexico. And what I’ve seen, again and again, would deflate the pride of the proudest Californian. Along these divides, ours is consistently the shabbier side of the border.

The juxtaposition is most jarring along our southern border with Mexico. Tijuana, once dismissed as a big slum, has become one of the great urban success stories in North America. At the main border crossing, Tijuana is dynamic and fast-paced, while, on the California side, the San Ysidro section of San Diego is shabby, with a particularly dismal McDonald’s.

Farther east along the border, the story is similar. California offers small and poor Calexico, population 39,000, immediately across from Mexicali, which has a population approaching 700,000. Peter Laufer, author of books about California’s northern and southern borders, wrote in Calexico: True Lives of the Borderlands: “Cosmopolitan sophistication is across the border in Mexicali, a 24-hours-a-day cornucopia of dining and nightclubs, theater, and concerts. It is the state capital of Baja California and home to the Universidad Autonoma de Baja California.”

But it’s not just on measures of dynamism that we’re on the wrong side of the border. Our neighboring states also offer border regions far more welcoming than ours.

Along the Arizona border, Lake Havasu City, with the London Bridge, outshines the settlements on the California side of the Colorado River, all the way down to dusty Blythe. Farther south, Yuma, Arizona, population 91,000, sits across from not very much at all.

Along the far northern coast, Brookings, Oregon, is a more prosperous place than the beautiful, but poor, Crescent City, California. And inland, Ashland, Oregon, home of the Oregon Shakespeare Festival, is far lovelier than Siskiyou County, which shows up in California newspapers mostly for fires and as unofficial headquarters of a secession movement.

The Nevada side of the California border is also far more built up, with casinos and the lights of Vegas at the Interstate 15 crossing juxtaposed against California scrub and desert. Up in Tahoe, the streets on the California side of the lake are noticeably less maintained than the Nevada thoroughfares. And no place on the lake gleams like Nevada’s Incline Village, a haven for Californians trying to avoid high Golden State taxes.

On the Mexico border, the lack of any welcome to California is in large part a function of the United States government, and the way it’s held hostage by our current political obsession with border security. Walking from California into Mexico is a pleasure—it takes less than five minutes. But I routinely encounter hours-long waits to walk back, because of federal border enforcement. On a recent trip, facing big delays crossing back from Tijuana, I paid $6 to enterprising Mexicans to ride in a van seven miles east to the less crowded Otay Mesa crossing. There it took me 40 minutes to get through border control, and then was picked up by the same van at a California-side sandwich shop and driven to San Ysidro so I could get the trolley back to downtown San Diego.

California has a reputation for regulation and big government, but at our borders, we’re the side that seems ungoverned. Needles, California, which borders Arizona (and is near Nevada), is one of the bleakest and most desolate places I’ve encountered in the state. Trains rumble through at all hours, and trash litters the streets. The first business I encountered on crossing into town from Arizona was a dark medical marijuana dispensary.

That’s typical. On the borders, California businesses often profit from our permissiveness. That’s why liquor stores greet people who come across our Oregon border.

The Golden State has long been distinguished by some of the nation’s lowest taxes on beer, wine, and distilled spirits—a legacy of the liquor lobby’s might that dates back to the famous powerbroker Artie Samish, the self-proclaimed “Secret Boss of California” in the early 20th century. Voters tell pollsters they’d be happy to raise liquor taxes, but the alcohol industry’s spending and the state’s two-thirds requirement for revenue increases have frustrated those efforts.

The locations of All Star Liquors on the California side of the border capitalize on these facts. Online, the store boasts “savings of up to 70 percent or more over Oregon, Washington, and Idaho pricing.” The stores also have what customers assured me (I’m a teetotaler) is an incredibly large selection, and excellent customer service. When I dropped by, All Star Liquors staffers were loading up two customers’ vehicles, neither of which had California license plates, as part of the store’s “Road Trip Service” that allows people to order online and have the entire order ready for pickup.

The store’s website promises: “You don’t need to drive any farther into California to find the best prices, best selection, and the friendliest staff this side of the Mississippi!”

That’s not exactly an endorsement of the Golden State. But it’s hardly surprising. Californians treat our borders like backwaters, even though millions of people enter California this way. We could do better by our border communities, and by our state, if we thought of them as front doors.