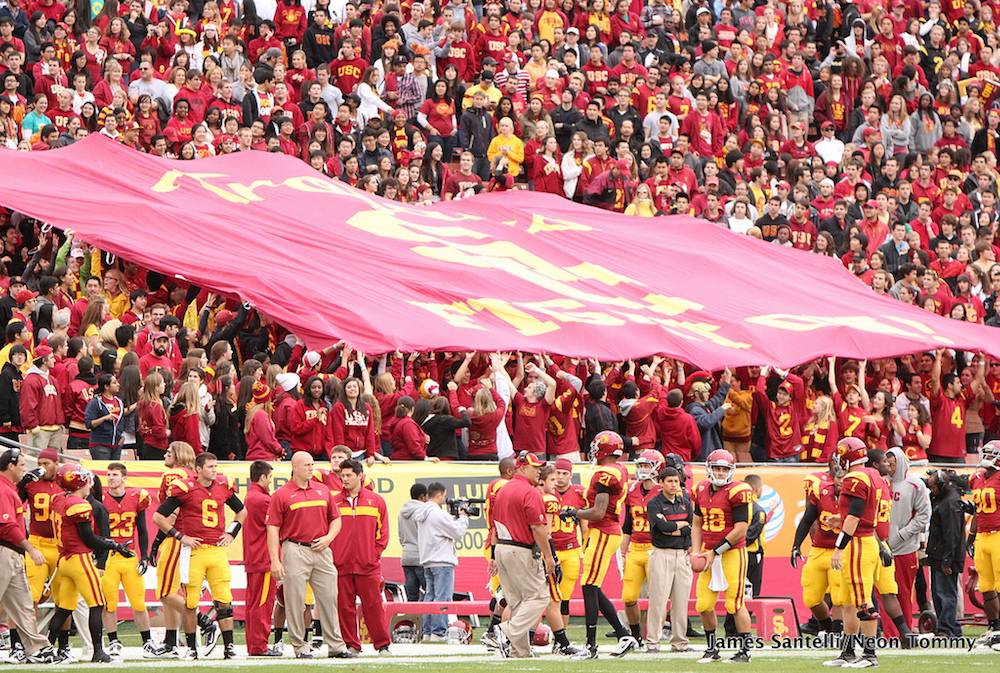 The University of Southern California football team is likely to lose to archrival UCLA this Thanksgiving weekend. But away from the gridiron, USC is on a decades-long winning streak that has become one of the most important stories in our state.

Over the past generation, USC has transformed itself from an easily mocked regional school for rich kids (“University of Spoiled Children”) into a global powerhouse. That growth has coincided with the decline or stagnation of other local entities, and turned USC into one of the most influential institutions in Southern California. And, through its successes, USC has demonstrated the growth that might be possible for California’s leading public universities—if they weren’t subject to the whims of our dysfunctional state government.

Central to the growth has been a strategy of capitalizing on USC’s flexibility as a private school to raise the school’s endowment and profile. Public universities are hamstrung in fundraising by the perception that they are primarily state-funded institutions (even though state funding is a small and declining fraction of their funding) and by the possibility that a big gift might come from an unpopular source. USC doesn’t have a meddling minority investor like the state government, and thus can fundraise as relentlessly as it likes. Its endowment, at nearly $5 billion, is one of the fastest-growing in the country.

And USC has spent aggressively—without the required disclosure and resulting second-guessing over big salaries common at our public universities—to recruit a more qualified and diverse faculty and student body. It now ranks among America’s elite universities by most measures, from the GPA of entering students to the amount of financial aid it offers (nearly $500 million annually). And, as public universities in California were forced to cut during recent budget crises and the Great Recession, USC accelerated its growth.

Public universities are prisoners of annual budgets and short-term political thinking. Just consider how UC President Janet Napolitano’s thoughtful proposal for a multi-year enrollment and funding plan won her criticism last fall from virtually every politician and editorial board in the state. By contrast, USC President Max Nikias, building on the success of his predecessor Steve Sample, has pursued a long-term strategy of better connecting the university to all elements of life in Southern California.

The Trojans have been expanding their campus and adjacent sphere of influence. USC has secured effective control of the L.A. Coliseum and is developing the nearby $650 million USC Village complex of housing, retail, and commercial space. USC has gobbled up institutions elsewhere in greater L.A. (from Verdugo Hills Hospital in Glendale and the Pacific Asia Museum in Pasadena), and sought a stronger presence in San Diego. USC has also been a big winner in two big L.A. trends—the rapid revival of downtown as a place for new residences and businesses (USC is just south of downtown) and the construction of new rail lines (Metro’s Expo line, which will reach Santa Monica next year, has three different stops along USC’s campus).

USC has never wielded more political influence, as our academically inclined mayor, Eric Garcetti, seeks to redesign the city’s basic systems. And with so much money and clout in a city where most people have very little, USC has become the place to go when you need help getting something done. One small example: When the daughter of Alfred Song, the first Korean-American to serve in the state legislature, struggled to find money for his memorial, USC arranged for the 10-foot-tall steel monument at the subway stop at Wilshire and Western.

More than a Trojan horse, USC is viewed across the region as the ultimate white knight. Many struggling L.A. institutions fantasize of being rescued by a USC takeover. These institutions include the L.A. Times, which, in my view, could find long-term viability by becoming a publication of the USC Annenberg School for Communication and Journalism.

At the same time it grows locally, USC has unabashedly prioritized global expansion, especially around the Pacific Rim. USC leads the nation in attracting foreign students, a fact it rightly celebrates. That’s in stark contrast to the University of California system, which has been bitterly criticized in the legislature and the media for adding foreign students, even though they pay higher tuition fees that effectively subsidize lower in-state tuition for Californians.

California’s public universities are desperate to hold onto their reputations for academic prestige, and thus can be quite traditional in their hiring and academic cultures. USC has few such hang-ups. The language of its strategic plan—especially its support of “entrepreneurial activities through flexible structures that allow faculty to move swiftly into new areas”—would trigger protests (“hey hey, ho ho, those corporate stooges have got to go”) in Santa Cruz. And USC has proudly opened well-funded and attention-getting institutes led by noted academicians like Dr. Dre and Arnold Schwarzenegger.

In L.A., Trojans are notorious for arrogance (and for alumni networks more tightly knit than most Mafia families), so it won’t surprise you that USC has been accused of being obnoxious in pursuit of growth. USC’s recent effort to steal a major Alzheimer’s research project from UC San Diego was so brazen that the University of California sued; the dispute has produced headlines and claims and counterclaims of conspiracy and bad faith. And indeed, as it catapults itself from mediocrity into the nation’s top-tier of private institutions of higher learning, USC will be facing the same questions now confronting the Stanfords and Harvards of the world—questions about whether its success contributes to widening class divides and inequality, and whether it should be doing more for those who have been left behind by poor high schools and circumstances.

I’ll be wearing a UCLA T-shirt this weekend for reasons personal (I grew up going to Bruin games at the Rose Bowl) and professional (UCLA is a vital partner of Zócalo Public Square, which produces this column). But I do root for USC as a powerful example for California. Yes, our public universities have found ways to remain excellent despite all the cuts and constraints. But just imagine how much more they could do if the state stopped its cuts and meddling, and allowed our universities to fight on with all the flexibility the Trojans enjoy.