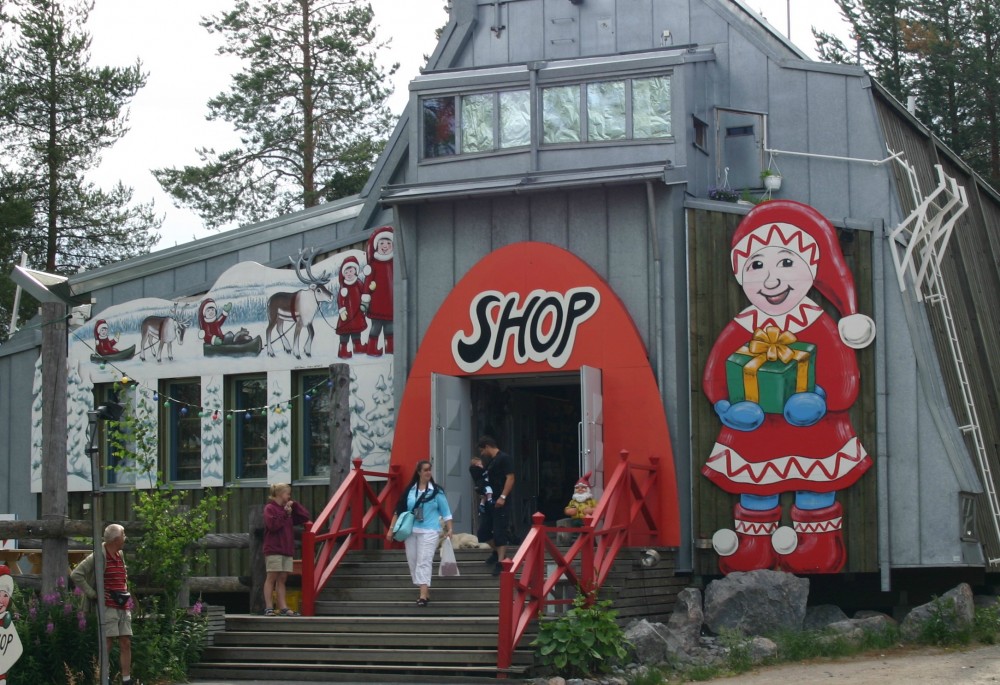 In my neighborhood, everyone gets a chance to live with Santa.

Östanfors, an old miners’ district in the town of Falun, Sweden, has a longstanding tradition of moving Old Saint Nick from house to house each day in December, so every family has a chance to “host” him. This means creating an elaborate Christmas-themed display in the front window. During this public advent calendar across our quarters, figurines of Santa and other seasonal characters like angels and reindeer find themselves in cotton-ball saunas, mock elections, even surrounded by festive guinea pigs. Host families open their doors on their special day to invite in friends, neighbors, and strangers for food and drink.

The intimacy of this ritual makes this one of my favorite times of the year. But out beyond Östanfors, it’s hard to ignore the claims of what I’ll call the Santa Industrial Complex. Countries around the world have clamored to fête themselves as the true home of Kris Kringle, so that they can steal a spot in the global cultural spotlight—and attract tourists. I can’t help but think that, in trying to pin down Santa in real life, a bit of the magic is lost in the process.

For centuries, Santa’s whereabouts were as unclear as they were legendary. He flew down to deliver gifts from the North Pole, and everyone left it at that. The mystery allowed countries to diversify his identity; Santa could look and act however different cultures wanted him to. He appeared as a black man in Amsterdam, a benevolent bishop in Munich, a pagan winter gnome in Finland’s Lapland. In Switzerland, where I was born, he visited homes every year on December 6 followed by a menacing figure called “Schmutzli” (the Swiss version of Krampus). There was little tension between these beliefs, because they existed so far apart from each other.

But today, it’s difficult for things to be so distinct. The Scandinavian-American artist Haddon Sundblom’s 1920s illustrations of a corpulent, jolly Santa drinking Coca-Cola pulled together pre-Christian winter traditions and the Catholic legend of a famous bishop and launched a global template for Saint Nick, which now even reaches predominantly Muslim countries. (I recently discovered no less than 50 portly Santa figures in a hotel lobby in Egypt.) Sundblom’s Santa still appears on Coke cans across the globe at this time of year.

So given Santa’s rising familiarity and Nordic countries’ proximity to the North Pole, why wouldn’t each of them lay some claim to hosting the jolly man? In the 1960s, Denmark launched the ongoing Scandinavian battle over Santa’s true home by moving it from the North Pole down to Nuuk, Greenland’s capital city, to make the global hero a Dane (Greenland was a province of Denmark at the time) and to promote tourism on the sparsely populated island. A gigantic mailbox was put up, inviting children from across the world to send their wish list to “Santa Claus, 2412 Nuuk, Greenland.”

After the mailbox was created, several employees of the Greenlandic postal service began to devote most of their working hours to answer the more than 100,000 letters the box receives every December. But one unfortunate consequence of trying to bring a fantasy story into reality is that reality sometimes butts in. As Greenland has become a quasi-independent state, local authorities have decided to cut all subsidies for this invention by the former colonial power. The consequence: Last year more than half of the letters to Santa never got a response.

Norway created its own famous destination of letters: the “Julehus” (Christmas Home), in the village of Drobaek, just south of Oslo. Around 1850, merchants from around the country started paying visits to a picturesque prayer house in the village, which adorned itself with increasingly elaborate decorations during the holiday season. Soon, past visitors began to send their children’s wish-list letters to the owners. Today, the house, now a museum, displays more than 250,000 such letters from across the world. However, as most children (and many of their parents) no longer know what a real stamp is, incoming wish lists have become rather rare, leaving the Norwegian Santa mostly unemployed.

Neither the Swedes nor Finns want to risk falling out of relevance in the same way, so they have invested in even more concrete Christmas infrastructures. Not far from my town in Sweden, a city called Mora decided in the 1980s to establish “Santa Town” (Tomteland), a small village on the shores of Lake Siljan. Here, too, the strains of reality on fiction are visible. First of all, local legend wants us to believe that Santa and Rudolf arrived in the town on a meteorite 377 million years ago. And while the town is full of Christmas workshops and cozy, open-fire houses for figures like dwarfs and trolls, a nearby failing ski resort has also had to become the home of several hundred Syrian refugees.

Further north, in 1998, Finland built an underground Santa cavern, meant to emulate the legend’s mythic abode in the region. Located near the city of Rovaniemi, on the Artic Circle, the “Santa Park” has everything from traditional Santa buildings to wild amusement park rides. It’s situated just a few kilometers away from Rovaniemi International Airport—nowadays called the “Official Santa Claus Airport”—which over the last decade would bring in more than 600 flights filled with Santa tourists each December. But recently, warmer weather has ruined its sleigh rides, and the economic crisis throughout Europe has kept visitors away.

Given all the holes that reality is poking in these fairytales, maybe countries should give up the idea of owning the “only real Santa,” as several national tourist agencies have claimed. Maybe it’s time to go back to a “democratic” Santa, for and by the people, whose story can be told in any way a group of people choose. That’s a big part of the magic of holiday legends, after all, isn’t it? The Santa displays in my neighborhood, for instance, are only at the mercy of our individual taste in decorations (and jokes). They’re never canceled because of political trends or global economic cycles.

If we want a modern spin, maybe we should just think of Santa now the way we think of him on the Internet. Santa is everywhere and nowhere—and there’s little need for reality to change the narrative.