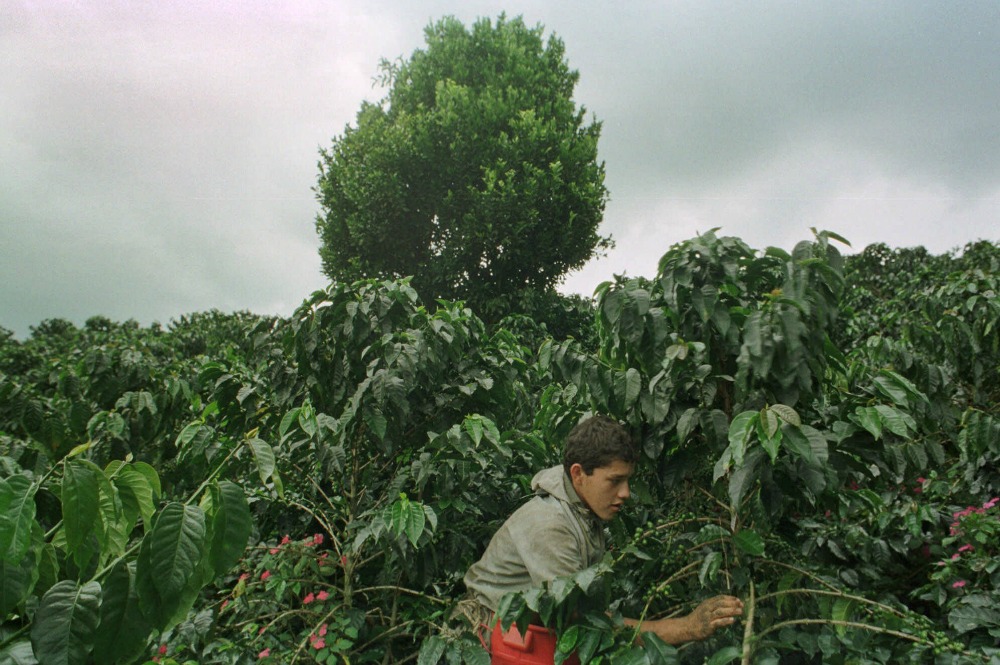 One morning a few years ago, I met a coffee grower in an upscale apartment complex at the edge of Guatemala City. He drove a Toyota Sequoia customized as a blindaje—a vehicle armored to repel attacks. His was not just a run-of-the-mill blindaje with bulletproof glass, but a level-three, built heavily enough to withstand a one-ton bomb. Among the Guatemalan elite, these are standard-issue vehicles. You’d be crazy not to drive one.

The grower was taking me to visit a coffee farm. Riding shotgun, I noticed the well-worn butt of a handgun sticking up next to my hip, between the seat and the center console. There was another on the driver’s side, just in case he and I might have to fight our way out of a scene like that last desperate stand in Butch Cassidy and the Sundance Kid. But these were bigger guns than those wielded by Newman and Redford—cartoonishly large Smith & Wesson revolvers.

These days, coffee is frequently advertised with an image that has become cliché—a smiling farmer whose work-hardened hands are cupping ripe coffee beans. But it’s not all smiles on the farm. The reality is that the soothing elixir we crave daily is often produced in tense places where guns abound, conspicuous emblems of lingering social and political instability.

Spend any time in Latin American coffee country, and you get used to seeing guns around. In much of the region, the state is weak, corrupt, or both, encouraging landowners to fend for themselves. At the same time, wealthy landowners and their private security forces are maintaining a centuries-old tradition of social inequality. And this social inequality has fueled long-running civil conflicts, like Colombia’s guerrilla war.

It’s not just handguns. Always present, too, are the 12-gauge shotguns hanging from security guards’ shoulders by frayed webbing straps or lengths of rope, all the bluing worn from the barrels by daily handling. These, too, are often grotesquely lethal looking. Especially the pistol-grip, short-barrel shotguns—aka riot guns—popular among urban security guards in Guatemala City, Panama City, and Bogotá. They look like something wielded by one of Quentin Tarantino’s villains.

Also impressive are the Mini-Uzis. These little Israeli-made machine guns are designed for close-quarters combat. I once asked a security guard about his, as he patrolled near the Casa de Nariño, the presidential palace in Colombia. He said it was just the thing for the local conditions—narrow streets, bounded by walls.

The reality is that the soothing elixir we crave daily is often produced in tense places where guns abound, conspicuous emblems of lingering social and political instability.

One day I wound up on a coffee plantation, riding around in a pair of ATVs with several other people. As we zipped over the dirt roads, I became aware of a man 20 yards behind on a motocross bike, and I wondered if we should pull over and let the bike pass. Then I noticed the shotgun the motorcyclist wore slung over his back and realized he was there to protect us, even inside the walls of the farm.

Late in the day, as the sun dipped over the ridge of the steep mountains, we found ourselves in a remote corner of the farm. The quickest way back to the hacienda involved a jump outside the walled confines of the plantation. So we passed though a gate and onto the cobbled street of a village. And there was the other Latin America. Tiny indigenous women stooping beneath tragic, towering bundles of green twigs for cooking. Tough men in cast-off American t-shirts and ball caps, returning from tedious days of clearing brush, riding on well-worn mountain bikes, machetes neatly bent into the frames. Uniformed school kids in white shirts, ambling home to corrugated tin hovels. All of them—the little old ladies, the macheteros, the school kids—angled toward the ditches as we floored it up the center of the narrow lane.

As we raced around the corner into a back entrance to the finca, we surprised two of the farm’s guards posted there. It was 20 yards from the street to the gate, and one of the guards, dressed in the olive-drab paramilitary style so popular among private security in coffee country, held the barrel of his shotgun to his chest with one hand and flat-out sprinted to get to the gate ahead of us, to open it so we could pass through unimpeded.

As he ran—head down, worn tennies pounding the cobbles—the plantation owner blithely kept the ATV floored, blasting along at top speed. It was as though the human running before us to smooth our passage simply did not exist.

The dueño passed through the gate without even a nod to the guard. The gate closed behind us, and we were soon back to the quiet hacienda. All protected by guns from the noisy world beyond the walls.

Yes, you get used to seeing the guns around in Latin American coffee country. This is something American coffee drinkers are insulated from. But I sometimes detect a faint metallic flavor in my coffee.