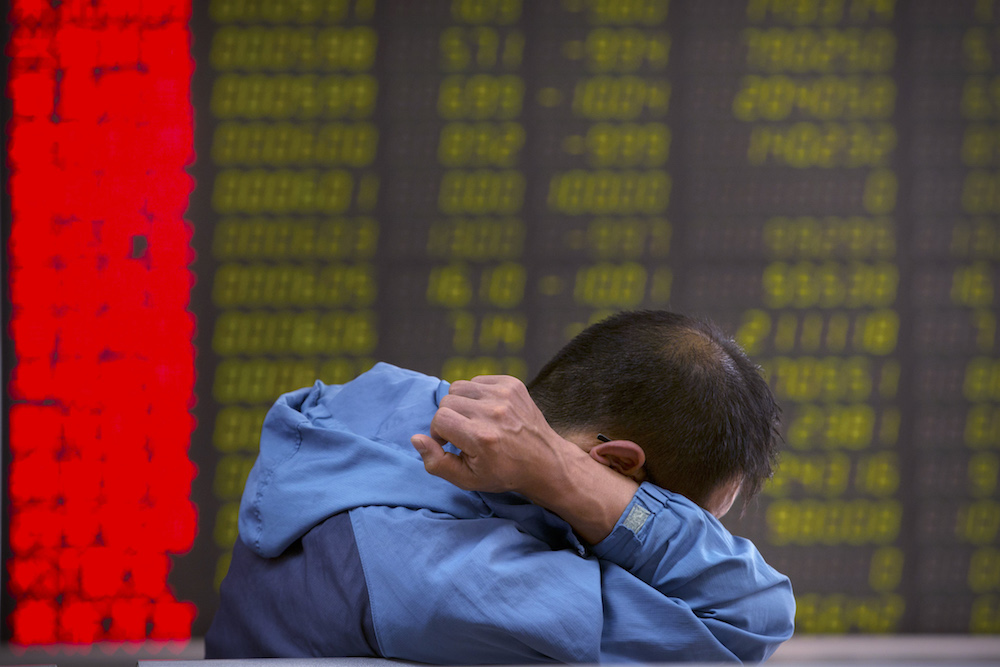 A Chinese investor monitors stock prices at a brokerage house in Beijing, Tuesday, Aug. 25, 2015. China’s main stock market index fell for a third day on Tuesday, plunging 7.6 percent to an eight-month low despite a multibillion-dollar government effort to stop a slide in prices. (AP Photo/Mark Schiefelbein)

China’s Communist leaders are struggling to embrace one of the pesky truths of the capitalist system they have adopted (and adapted) with such success: Markets don’t just go up; sometimes they go down. Sometimes, like this past week, they go down hard and fast. The Communist Party isn’t used to being told “you can’t control this.” And party leaders aren’t convinced that’s true, which has made the situation far worse. Financial markets only work if investors feel free to buy and sell when they want, and believe there will be a functioning marketplace that enables them to do so at their convenience. If investors feel that some controlling government authority is going to block the exits at the first sign of trouble, they will make a dash for the exits, while they can.

There are plenty of reasons for China’s once-exuberant stock market to be in a slump. The underlying economy’s growth rate is slowing down. The yuan is losing some of its value as it is allowed to trade more freely and become a legitimate global currency. The yuan’s legitimacy is good for the country in the long term, but makes Chinese investors feel poorer in the short term and encourages them to take their money out of the country and invest in other currencies. At the same time, many Chinese investors, both individuals and companies, have been burned in recent years by their investments in other emerging markets. Beijing’s crackdown on corruption at state enterprises and among party officials and their business cronies has also accelerated capital flight, as people are eager to take their money (including ill-gotten gains) out of the country and invest in safer harbors (say, California real estate). Finally, geopolitical uncertainties like North Korea’s attempts to develop a hydrogen bomb test and Middle East tensions don’t help inspire investor confidence.

So things came to a head in the first week of the year, as Chinese regulators sought to impose some order on (if not slam the brakes on) their stock market selloff. On Thursday, a newly designed “circuit-breaker” shut down the markets for the day after the stock index had plummeted 7 percent in a mere 29 minutes. U.S. markets also have so-called circuit breakers to ensure that wild swings in markets don’t take on a life of their own due to algorithm-triggered trading. But the U.S. market circuit breakers aren’t as quick to intervene, and don’t disrupt trading for as long.

This interruption of China’s markets on Thursday captured much of the attention last week, as did all the news that made investors jittery in the first place. Less attention was paid to what might have been the main culprit of the week’s financial chaos: a time bomb set by China’s Securities Regulatory Commission (CSRC) back in July of 2015.

Last summer was a major wake-up call for Chinese investors and global markets that real trouble was brewing in the Chinese economy. As the Shanghai Composite Index fell from its peak of 5166 on June 12, 2015, to 3507 on July 8, the CSRC tried to calm the market by banning major shareholders, corporate executives, and directors (with stakes exceeding 5 percent) from selling stakes in companies listed on the exchange for six months. That six-month ban expired, as scheduled, last Friday, at the end of a week already marked by frenetic selling.

If investors feel that some controlling government authority is going to block the exits at the first sign of trouble, they will make a dash for the exits, while they can.

It’s human nature to want to avoid bad things from happening, but outlawing selling in financial markets always backfires. Countries often impose exchange controls to avoid too much money leaving the country (think Argentina in recent years), or declare bank “holidays” to stop everyone from withdrawing their savings at once (think Greece last summer). What invariably happens, absent some quick fix to the underlying crisis of confidence, is that people only become more anxious and unsettled, increasing the urge to sell, and run.

A key to understanding the psychology of any market is that no one wants to be the last to sell, to be left holding the proverbial bag. So when you ban major shareholders, corporate executives and directors from selling stakes for six months, and everyone else knows the first day they can sell any shares again is on Friday, what do you suppose will happen on the days leading up to that Friday? It’s like marking the perfect storm on the calendar for a certain date, and triggering the panicked herd effect in advance. (It was bad luck for regulators that they kicked the can last summer to a week that already got off to a bad start.)

The circuit breaker that intervened as a result of all that selling is also a bad idea. Why? Most investors (especially Chinese investors) think of trading stocks as gambling, and the stock market is like a casino. If the casino owner tells you that it shuts its door any time the house loses, what will the gamblers do? They grab their money and run! There is a sense of honor among all those at the gambling table, and part of that honor is the mutual assurance that you can take your chips and cash them in whenever you want. The CSRC was quick to announce after Thursday that it will suspend its new counterproductive stock market circuit breaker, which was a good move even though it reinforced a sense that regulators are simply winging it day to day.

China, to be fair, had imported some of these restrictive measures from Western markets. We have circuit breakers too, and when companies first go public, U.S. markets also impose “lock-up” periods during which insiders can’t sell their stock. But Chinese markets have imported these concepts with excessive zeal, before they have established the credibility or transparency of Western markets. In hindsight, CSRC should not have banned major shareholders to sell any stakes, but could have set a time schedule for them to sell, say, no more than 5 percent of their stakes in each month. At least that would have smoothed things out.

There remains a larger overarching challenge for China’s leadership, and it isn’t clear that this is one they can conquer within the constraints of their political system. And that challenge is to accept a basic truth facing market-based economies plugged into the global economy: There will be down days, and pretending there won’t be, or can’t be, will only make people more anxious, and make things worse.