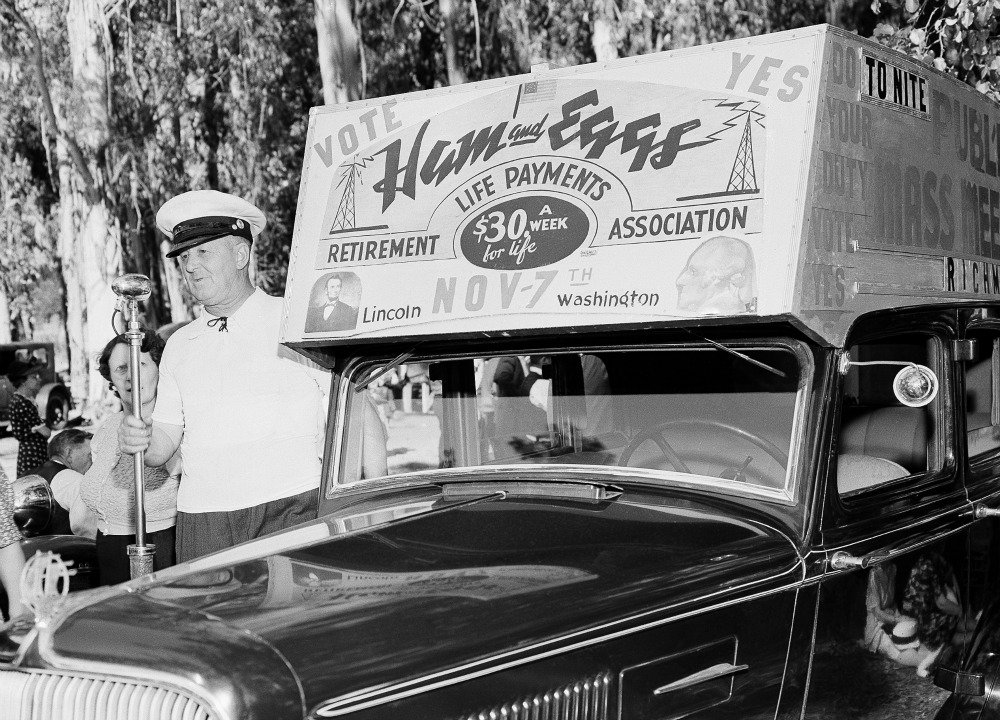 Do you want your ham and eggs, California?

It is one of the oldest and most enduring ideas in our state: Government should provide everyone with a minimum amount of money on a regular basis. It goes back to the 1930s, when Californians narrowly rejected the so-called “Ham and Eggs” proposals to give Californians a $30 check every Thursday.

Now, this notion is back, a subject of books and op-eds and speeches, especially in the Bay Area, and with some bipartisan political momentum. Thinkers on the left have embraced it as a bulwark against poverty, inequality, and corporate power. Feminists and children’s right advocates argue that it would offer a method to pay people for the crucial work of homemaking and child-rearing. Some libertarians and conservatives like the idea as a way to consolidate the sprawling number of government programs and replace them with a cash grant. And technologists and venture capitalists in Silicon Valley see it as vital insurance against the likelihood that advances in artificial intelligence will eliminate millions of jobs and careers.

The “Ham and Eggs” idea has different names and comes in different concepts. Some proponents talk about a universal basic income, or a guaranteed minimum income, that would be a backstop so that all citizens or families have a sufficient income to live on. Conservatives often prefer to call it the “negative income tax,” since they would expand the tax system to provide supplemental pay to those who need to reach a minimum (the federal Earned Income Tax Credit does this already to a limited extent).

In the rest of America, the idea is usually dismissed as socialistic or irretrievably expensive. But in California, it has remained stubbornly strong. Why? It may persist because our boom-and-bust economic culture produces moments of real desperation for millions. It may reflect our well-known weakness for grand utopian ideas that aren’t taken seriously in the more sensible and less interesting parts of the United States. Maybe Californians have more of an appreciation for the technologically advanced future when it will take much less labor to take care of us, so we’re more inclined to decouple work from income and establish some other societal profit-sharing scheme to bankroll our leisure time.

What is undeniable is that California has long had an outsized role in promotion of social insurance schemes. It was a Long Beach doctor, Francis Townsend, who suggested the program that became Social Security. The “End Poverty in California” movement of the 1930s, which included pensions for all, provided national exposure for the idea of guaranteed income.

And so did “Ham and Eggs”—which took its name from the concept that a $30 weekly check to Californians would guarantee them a square meal. Two statewide initiatives in 1938 and 1939 for “$30 Every Thursday” to Californians age 50 and older produced two of most contentious and violent political campaigns in California history, with organized crime, national business groups, and even President Roosevelt playing roles. The writer Carey McWilliams called “Ham and Eggs” the “most fantastic, incredible, and dangerous” movement California had produced.

Those defeats hardly discredited the idea. The Reverend Martin Luther King Jr. was a strong proponent. And so were voices on the right, led by the conservative economist Milton Friedman—an important California figure who advised Governor and President Reagan, backed Prop. 13, and spent the last 30 years of his life at Stanford’s Hoover Institution.

Friedman designed and promoted a proposal for “the negative income tax.” He saw direct cash payments to the poor as more efficient and less distorting of markets than the government’s complicated stew of welfare programs. (The appeal is not dissimilar to the popularity of school vouchers among conservatives.) Friedman helped inspire the only president born in California, Richard Nixon, to offer his own proposal in 1969; it failed, but the concept didn’t die. The idea has been advanced every few years, often with a Californian doing the advancing. Before his disastrous tenure as mayor of San Diego, Congressman Bob Filner sponsored legislation to establish a guaranteed income.

Over the past couple of years, the idea of guaranteeing money has developed new currency in the context of growing concerns about California’s staggering inequality and the highest poverty rate of any U.S. state. Once dismissed for its high costs (estimates put the cost of providing a minimum guaranteed income to keep every American out of poverty at around $2 trillion), it now looks like a bargain compared to the massive spending promises of Bernie Sanders or the enormous tax cuts proposed by Republican presidential candidates.

We’ve seen elements of guaranteed income in proposals among liberals to double the size of Social Security, and in the successful movements in California cities for a higher minimum wage. A guaranteed income feels like the next national wave, on both left and right. Thinkers on the left, like the California-based academic Robert Reich, have come out for it. And on the right, presidential candidate Marco Rubio and new House Speaker Paul Ryan have made proposals to consolidate existing welfare programs into cash grants that would be run through states. It’s also a hot topic in academia. Economists have researched similar programs—in places like Brazil and Mexico—and found that poor people who are given cash grants usually use the money responsibly and efficiently.

But in California, the most intriguing support is centered among the technologists and venture capitalists of Silicon Valley. There, the primary arguments for basic income are twofold. First, that a guaranteed income will protect the people who lose their jobs because of California’s technological innovations. Second, that more people would have more time to create and be entrepreneurial if they didn’t have to worry about paying their bills.

“Universal basic income might be the most meaningful way we could subsidize the earliest stages of innovation,” wrote venture capitalist Roy Bahat, the head of Bloomberg Beta, the venture fund backed by Bloomberg LP, in the Washington Post. “It could multiply, by many factors, the amount of time people can spend creating.” Bahat told me recently that he expected basic income to be “one of the main political discussions of the next decade or two.”

California offers perhaps the most likely venue to try such an idea at the state level; we have a powerful ballot initiative system that would allow for the quick advance of such a proposal, and deep-pocketed potential backers to campaign for it. For weeks, I’ve heard rumors about Bay Area capitalists planning such an initiative, but no one involved would admit to me they were drafting such a measure.

Either way, this is one California idea that isn’t going away. Your check may soon be in the mail.