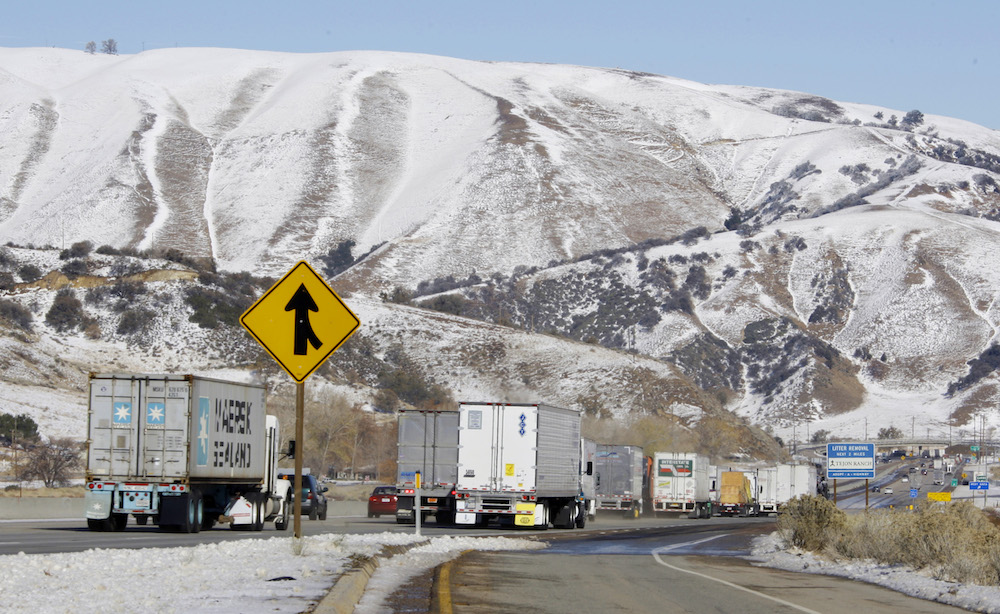 The Tehachapi Mountains have a blanket of snow as hundreds of vehicles, many of them stopped overnight, move along Interstate 5 near Gorman, Calif., shortly after it reopened after a snowstorm closed California's main north-south artery in the Tehachapis Tuesday, Dec. 8, 2009. (AP Photo/Reed Saxon)

Don’t mess with the Tehachapis.

A mishmash of mid-sized peaks that extend some 40 miles across southern Kern County and north Los Angeles County, the Tehachapis effectively form the wall that defines our state. This is their paradox: The Tehachapis at once separate and connect California’s regions—north and south, valley and desert, Sierra Nevada and coastal range.

As a barrier, the Tehachapis—the name is often attributed to the Kawaiisu Indian word “tihachipia,” meaning “hard climb”—boast an undefeated record. They have been penetrated—by I-5, by great aqueducts, by power lines—but they have never been truly conquered.

Recently, the Tehachapis emerged at the center of one of California’s most stubborn debates, over whether to complete a landmark high-speed rail project. Plans to build high-speed rail first from the Central Valley to Southern California have survived lawsuits, changes in governors, relentless media attacks, bipartisan political opposition, and waning public support. But last month, spooked by the financial and engineering challenges of finding a way through rock and earthquake faults of both the Tehachapis and the neighboring San Gabriel Mountains, the high-speed rail authority said it might make a U-turn, and start by connecting the Central Valley to the Bay Area first, while delaying the challenge of tunneling through the Tehachapis to L.A.

Of course, the high-speed rail builders would hardly be the first people to lose their nerve at the prospect of crossing the mountain range. Is there any more fear-inducing drive in our state than traversing the Tehachapis on that scarily steep and windy stretch of I-5 known as the Grapevine? And the off-interstate roads are even more treacherous at this time of year, when snow covers roadways and rain can cause mudslides. I recently skidded off the road there (hitting nothing, thank goodness and doing no damage to my car) when an unexpected snow squall hit me during a bit of exploring.

Freight trains still go over the mountains as slowly—less than 25 miles per hour—as they did in the 1870s. Amtrak has all but given up on train service through them. And a Southwest Airlines pilot once explained to me how planes almost always hit at least a bit of turbulence going over the mountains, a product of shifting wind patterns.

In this, and in other ways, the Tehachapis represent Californians as we really are: difficult, stubborn—and shorter and wider than we appear in our publicity stills. (Not everyone can look like the Yosemite Valley or Angelina Jolie.)

And scientists and conservationists will tell you that, in their diversity, the Tehachapis are the most Californian of mountains. As Bob Reid, Michael White, and Scot Pipkin of the Tejon Ranch Conservancy patiently explained to me, the Tehachapis are the only place in the state where four varied regions converge—the Mojave Desert, the Sierra Nevada, the coastal range, and the San Joaquin Valley.

And so the Tehachapis, like California, are full of places where very different things thrive in close proximity—desert scrub and Joshua trees next to Sierra Nevada forest, or coastal chaparral near Valley grasslands. This biological diversity, in combination with the Tehachapis’ varied topography (from peaks to plains) may make species there more resistant to climate change. And it means the mountains, like our state, are full of surprises; the adobe sunburst and the California jewelflower are among the plants that have turned up there.

The Tehachapis, so little talked about despite their importance, used to loom larger in the public imagination. Read newspapers and books from 19th-century California, when most of the state’s population was in the north and crossing the Tehachapis was a life-threatening undertaking, and you’ll find Southern California routinely described as “South of the Tehachapis” in the tone one might speak of a renegade province or an uncivilized hinterland.

But in the 20th century, California tilted south, and the Tehachapis became less prominent, serving as a wall to prevent Southern California from sprawling too far north. Another reason the Tehachapis were not talked about so much: They are mostly privately owned (for ranches), and not so easily explored by California’s nature seekers.

That is beginning to change. The last decade has brought the promise of a new era to the Tehachapis—and that involves more than just the highly publicized restoration of a California condor population in the Tehachapi region after near extinction.

The Tejon Ranch, a 422-square mile property in the Tehachapis, has pursued commercial, retail, and housing development on some of its property (perhaps notably the Outlets at Tejon along I-5 north of the Grapevine), while also striking, in 2008, a historic agreement with environmental organizations to protect 90 percent of its land. Now the Tejon Ranch Conservancy is working to conserve, explore, and provide public access. There are wildflower viewing stations, bird watches, community hikes and drives, student trips, naturalist classes (based on the University of California’s famous naturalist program), and citizen science projects. This spring will offer more opportunities for Californians to get to know this hard-to-know mountain range.

Private conservation efforts like Tejon don’t draw headlines like presidential declarations of new national parks or forests. But they are more representative of the future than the flashier conservation of public lands, which has become more difficult given the higher costs of land, the pressure on public budgets, and political polarization around eminent domain and property rights.

The conservation of the Tehachapis means more Californians may connect to the range, and not merely through it. Californians will want more of both kinds of connections, and we’ll need to be careful to minimize their impacts. The Tehachapis, once again, will have to hang tough.