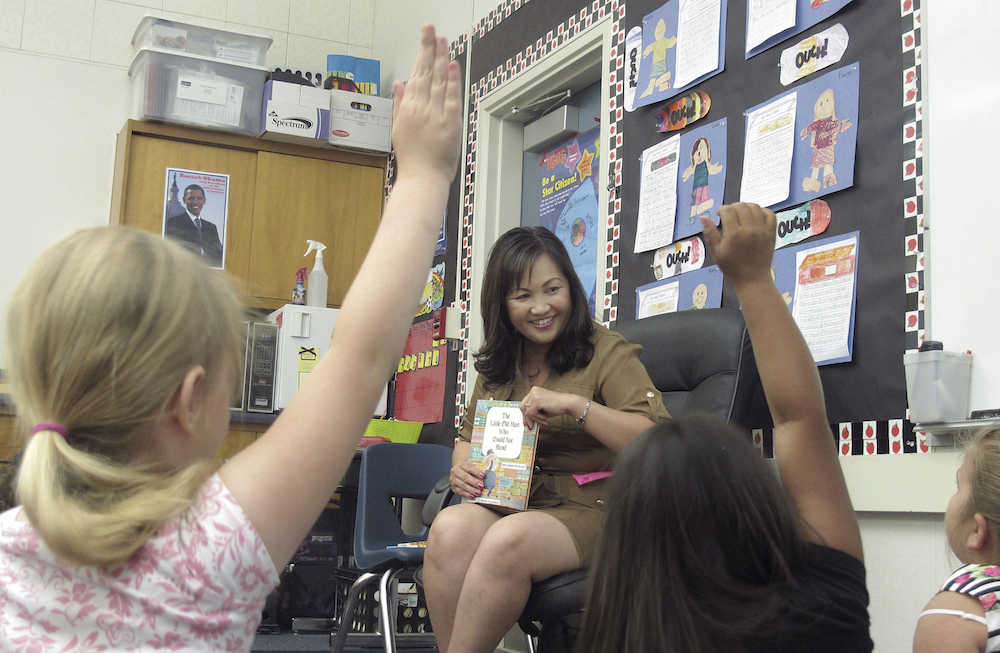 What would a California school district be like if it jettisoned its teachers’ union?

Up until recently, that question has been mostly hypothetical. For some, it’s a fantasy: Conservative education reformers believe that drumming labor out of the classroom would improve test scores and teaching. For others, it’s a nightmare: Teachers worry they would be left with little protection from the whims of said reformers, not to mention superintendents and school board members.

This year, the question has become more urgent. With the death of Justice Antonin Scalia, the U.S. Supreme Court is now divided 4-to-4 on the validity of the funding model for public employee unions. So this November’s presidential elections could be a life-and-death question for some teachers’ unions. If the country elects a Republican president, the likely result would be the appointment of a conservative justice who would vote to stop unions from collecting money from nonmembers, weakening teachers’ unions so much that some might disappear from some school districts around the country.

What would that mean for teachers, schools, and parents? It’s impossible to know for sure. But California offers one fascinating and complicated example: the Clovis Unified School District.

Clovis Unified is by far the largest school district in California without a teachers’ union. While Clovis is known as a small city of 100,000 neighboring Fresno, the full district is much bigger, sprawling over nearly 200 square miles that encompass big swaths of Fresno and other communities. It’s the 16th largest school district in California (smaller than Riverside Unified, bigger than Stockton Unified), with 42,000 students, 49 schools, and 5,000 employees. It also happens to be one of California’s most representative districts. It’s diverse, with about half of its children on free and reduced lunch, and with no ethnic majority among the student body.

Parents, teachers, and administrators in Clovis tend to be proud of their schools. Academics and athletics are strong, and graduates have a tradition of excelling in the military. But residents don’t brag—publicly, at least—about their lack of a teachers’ union. This isn’t because they want a union, I’ve found on visits. It’s because they’re skeptical that Clovis’ one-of-a-kind structure could be a model for anyone else.

Clovis Unified teachers and administrators see their district as having a peculiar history that has given it an accidental, if effective, method of governing itself. This history starts with Floyd “Doc” Buchanan, the district superintendent from 1960 until 1991. Deeply respected, Buchanan was known for being close with teachers and valuing personal relationships over rules and bureaucracy. In the 1970s, California’s teachers’ unions won the right to represent teachers in districts throughout the state, but Buchanan resisted, arguing that his district would so empower and serve teachers, there was no need for a union. And teachers believed him, and voted against union representation.

Instead of a union, Clovis’ teachers and Buchanan formed a “faculty senate”—the goal was to have something worthy of a university—to give teachers more of a role in the governance of the district.

But that wasn’t the end of the story. Instead of a union, Clovis’ teachers and Buchanan formed a “faculty senate”—the goal was to have something worthy of a university—to give teachers more of a role in the governance of the district. Teachers were elected to represent each school, and in turn elected officers to a faculty senate “to be an effective advocate for teachers at all levels of policymaking, procedures and expenditures, in partnership with our administration, fellow employees, and community as a quality education team.”

And, unlike a union, there were no dues to pay.

Of course, Clovis Unified could only be so different. In California, state law governs most of what happens in school districts, including matters central to debates about unions, such as teacher tenure and the firing of teachers. But, as the faculty senate evolved, the teachers it represented began to exert more power, by creating committees with other district stakeholders for almost every conceivable matter: benefits, wages, the district budget, the scholar calendar, curriculum, and school safety. “If there’s a committee, we’re on it,” says Duane Goudy, the faculty senate president. “If there’s a meeting, we are part of it.”

As faculty senate leaders explained this committee-heavy system to me in a district meeting room recently, I was reminded of German work councils—joint worker-manager groups that make and adjust national and local labor agreements. But when I suggested Clovis was German, the teachers laughed. This method of representing teachers, they said, was Clovis’ own home brew, which fit the place and its history.

Among the many advantages of this governance system, teachers said they liked that it forced the district to come to a consensus on issues. Once decisions get made, they stay made. And teachers feel as if they have more control of their own destiny. This method of governance provides crucial flexibility in bad times. During the Great Recession, the district avoided layoffs of full-time employees and cuts to the length of the school year because teachers on the committees decided to impose a 2 percent pay cut and three furlough days on themselves.

For this system to succeed, it requires great openness among administrators; the superintendent has an open door. This breeds closeness to the community. For example, while it’s now routine to find school campuses closed after-hours throughout California, Clovis Unified prides itself on keeping its school campuses open so that neighborhoods can use them on evenings and weekends.

Of course, there are drawbacks. Privately, teachers say some committee meetings can feel endless. Clovis’ method of governing itself is so different that it can be hard for administrators hired from outside the district to adapt. And even staunch believers in the faculty senate approach wonder whether a system that relies on face-to-face meetings and relationships can survive as the district continues to grow. They say it’s already hard to make changes quickly because so many people have to be consulted.

But the system is likely to endure, in part because the district gets results. Clovis Unified performs above average academically and does well in attendance. Teachers shower praise on the district in surveys.

For the rest of us, Clovis Unified suggests that school districts without teachers’ unions won’t be hells—or paradises. They could even be places where teachers have the power to be true partners in running school districts—with all the responsibilities and headaches that come with it.