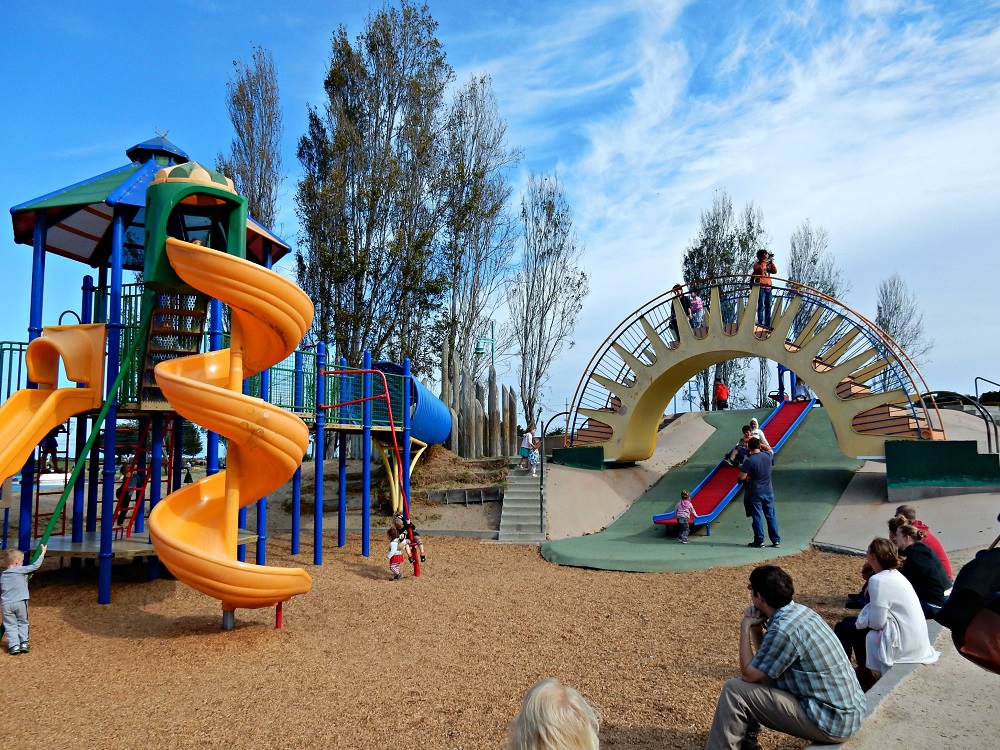 The trend has its advantages. Fifteen years after the state legislated compliance with national safety standards for new and renovated public playgrounds, I can take the Three Stooges—my three impish and ever-brawling sons under age 8—to parks around California confident that I’ll see the same reassuringly safe equipment: low swings, low slides, plastic bridges rather than wood or metal, ubiquitous guardrails, and either super-soft rubbery mats or at least 12 inches of sand or wood chips to cushion falls.

But all that safe sameness is boring. Today, the fun and distinctive playground pieces that once held the attention of children—merry-go-rounds, teeter-totters, Tarzan-style ropes, high monkey bars, and flat swings—are nearly impossible to find. And playground safety, while producing declines in litigation over injuries at our local parks (data on actual injuries are less clear), carries its own risks.

There is a way for California parents to counter these trends: Seek out those few classic California playgrounds too old (anything before the mid-’90s) to comply fully with today’s regulations. And so, like the dad who plays his kids Miles Davis records to counter bubble-gum pop and dumb rap, I’ve made it a minor mission to introduce the Three Stooges to dangerous old playgrounds.

On road trips, we’ve visited Alameda Park in Santa Barbara to experience the Kids World playground, a giant old wood fort with so many places to hide that you won’t be able to keep your eyes on one kid, much less three. Despite the real dangers of falls, we’ve enjoyed the simple playground at Tidelands Park right on Morro Bay—with its wood-and-metal pirate ship and seal statues allowing kids a glimpse of the otters in the bay and a majestic view of Morro Rock.

Then there’s our local dangerous San Gabriel Valley favorite, La Laguna, at Vincent Lugo Park in the city of San Gabriel. There’s a book to be written about the Mexican artist Benjamin Dominguez, who created 14 wonderful and somewhat scary concrete structures a half-century ago, near the end of a difficult life that also produced the Atlantis playground in Garden Grove. The concrete structures look like dinosaurs and whales and octopi, and kids climb slippery steps to go down long, treacherous slides. 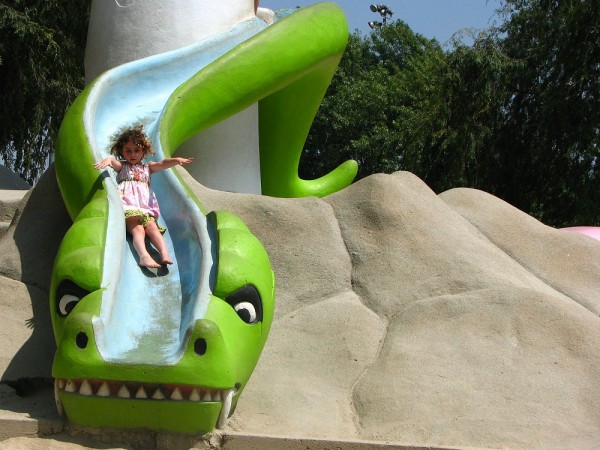 The Three Stooges love La Laguna so much I realized I needed to take them to the mecca of old-school California playgrounds: the Dennis the Menace Playground inside El Estero Park in downtown Monterey. So last week, on the way up to visit my grandmother in San Mateo, we drove the 101 (even though that guaranteed us 90 minutes more of backseat car fights than the faster 5) to make our pilgrimage.

Dennis the Menace has had some safety updates, but it remains very much the same place designed in the 1950s by Monterey citizens, including Hank Ketchum, creator of the troublemaking comic strip character for whom the park is named. There’s a suspension bridge that hangs dangerously high and long over the center of the place. Getting up to the bridge requires climbs up rocks on either side. The park is full of extra long and twisty slides. And near the back a second sundial bridge spans over a roller slide two stories tall.

Our only disappointment was that you can no longer play on the old rail steam engine near the entrance—a sign says the city is trying to figure out a way to allow access while still complying with state safety laws.

After an hour on the playground and a brief ride on the paddleboats in the park’s lagoon, I drove the family north to Grandma’s, muttering about playground greatness being a thing of California’s past. But a few days later, I was proven wrong—when I took the Stooges to Palo Alto’s Mitchell Park, where the Magical Bridge playground opened just last year.

Magical Bridge is annoying in the way of so many Silicon Valley enterprises; it’s not content to just be smart, it has to tell you how smart it is. So playground signs cite research on how its equipment is improving your children’s vestibular development, and offer links to a website boasting that Magical Bridge is “the nation’s most innovative and inclusive playground.” There’s also a donor wall honoring the tech worthies who covered the $3.8 million cost, a “Kindness Corner” with anti-bullying messages, and “a patent-pending safe slide landing.”

But, in spite of all its preciousness, the place is great.

Magical Bridge is the brainchild of a local mother who wanted a playground that would go beyond the wheelchair access mandates of the American Disabilities Act to serve children with all manner of development and physical disabilities, including her own daughter. The place’s genius is that it achieves a truly magical combination: It’s at once more inclusive and more challenging than the standard California playground.

Large disc and bucket swings can accommodate kids with disabilities and create speedy movement to satisfy risk takers. There are multiple treehouse bridges, a two-story playhouse, and a theater—all fully accessible. “Retreat” areas in different places around the playground are designed for children with autism who get over-stimulated. Some playground equipment allows children to make music with movement, including a 24-string laser harp.

The slides are tall, and there are two 21st-century versions of the merry-go-round. One is built into the ground for access and has adjustable pieces to allow kids to hold on and spin in different ways. The other combines a spinning circular platform at the bottom with a cone of ropes that allowed kids to climb even as they spin.

At the top of the merry-go-rope structure, the Stooges enjoyed a 360-degree view of this new and classic California playground. They also loved the dangerous and novel feeling of being so high that they were out of the reach of their parents.