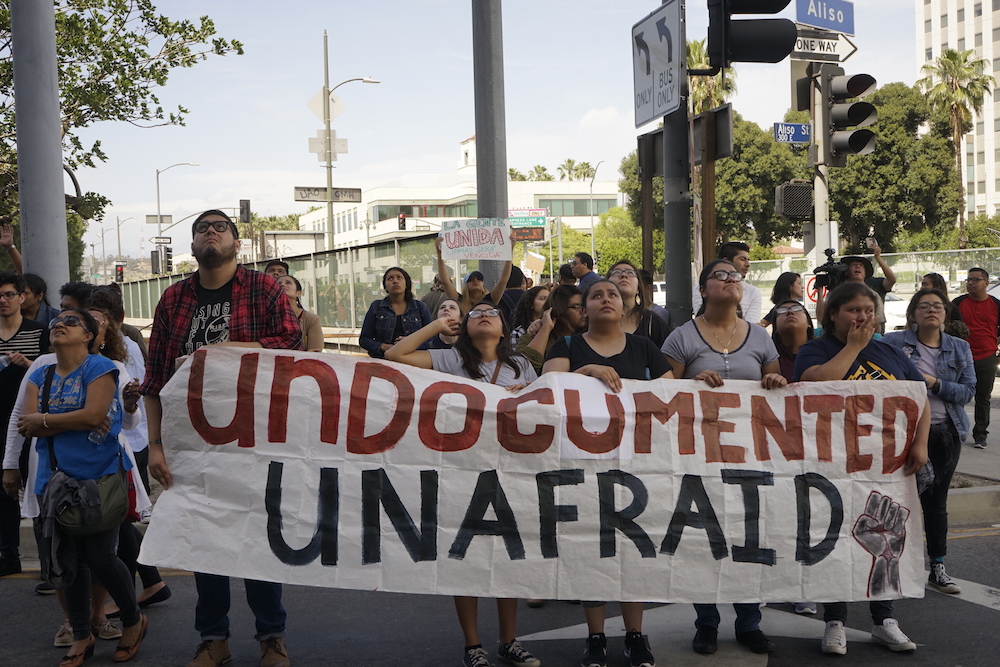 For three years, I was a high school English teacher at 103rd Street and Broadway, the southernmost tip of South Los Angeles, a stone’s throw west of Watts. Many Californians think of this as drive-over, landlocked, and lock-your-doors Los Angeles. But my students know this small patch, one of the lowest income zip codes in the county, as home.

There are approximately two million undocumented minors in the United States today, and if I were to guess, I’d say about 20 percent of my students were part of that population. Such young people are often called “invisible” or “voiceless,” But in my time as a teacher there, I came to understand that undocumented students and their families are actually too visible.

Which is to say—undocumented students and families feel overly conspicuous as they constantly worry about exposure in matters from the life-or-death to the mundane: Should we go to the emergency room? Should we jaywalk? Is a trip to Sea World in San Diego, where there is lots of border patrol, worth it? How much is an immigration lawyer? Will this broken headlight doom me to exile? Can people tell my status?

Once, after a special awards dinner for the winners of the school’s creative writing contest, my students had a hard time finding a ride home from Pasadena. After a number of wrangling phone calls, one of their fathers made the drive. No one said it, but I eventually figured out that their parents were not comfortable driving that far, in older model cars, to “nice” neighborhoods, some without driver’s licenses.

During my last year, a sweet but a struggling Salvadoran-American student named Paola began hanging out with the military recruiters who visited once a week during lunch. When I asked her about her college plans, she told me that college wouldn’t give her a paycheck. I told her she’d make much more with a college degree than she would as an army private. She replied, “College won’t help me get my papers.”

I had no argument for that. She enlisted right after graduation. I follow her military career on social media, still amazed that a young woman who does not even weigh 100 pounds would serve in the military of a country she technically is not yet a part of. 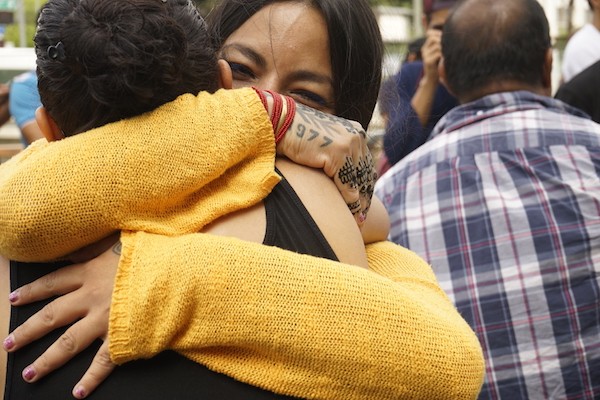 An embrace at Chant Down the Walls, an undocumented students rally in downtown Los Angeles in 2016.

As their teacher, I wanted to help, but I didn’t know how. I am not a lawyer or a policy writer or a government official. So I turned to what had gotten me through my difficult years as a Vietnamese refugee who grew up just eight miles away in North Long Beach. I turned to art; I turned to literature. We watched movies like Sin Nombre and A Better Life and we read books like Enrique’s Journey, Voice of Witness, and Underground America.

Most profound of all, we read a book called Nueve Años Inmigrantes. It’s a book of poetry filled with striking lament and imagery, written by the Salvadoran-American poet Javier Zamora. In it, he writes about living apart from his parents and then traveling alone over 4,000 miles across multiple borders to reunite with them as a nine-year-old. My students, Salvadoran in background or not, were amazed—they saw themselves and heard their families’ stories in these poems. Someone who looked and lived like them—young, immigrant, and undocumented—had written a book.

For Itzel, a former student of mine who is now a sophomore at UCLA, Zamora’s work triggered difficult memories from her past. One morning her dad was driving her to middle school. He didn’t have identification and was mistaken for someone else by the police. He was detained, deported, and then estranged from his family for two years. He eventually reunited with his family after a second harrowing, $5,000 border-crossing. “My dad risked his life two times for me to have a better life,” Itzel said.

So when the poet Zamora, who is a good colleague and even greater friend, made the trek from New York City to South L.A. during his winter break to guest teach my classes two years in a row, it was a metaphor come to life: The pebble in the pond and its lingering ripples. “My job as a poet is to create conversations about all the things that make us human,” Zamora said recently. “When I hear that students, immigrant students, undocumented students, Salvadoran students are reading my work, I just go. It’s my duty.”

In the most banal of places—a high school classroom in an ignored neighborhood—we uncloaked our invisible yet too visible lives.

After one period, a group of Salvadoran students lingered into their lunch to talk with Zamora. I stood in the hall and gave them a private moment, recognizing a mutual understanding that comes too rarely for marginalized people. Through the glass window of my classroom door, I saw Paola poring her heart out and visibly crying. When I mentioned that moment to Zamora years later, he remembered vividly. “We connected through our shared history, but she was also shocked by my personal story—scholarships to prestigious schools, a book, a voice, of whatever size, in America,” he recalled. “She was crying because of the possibilities she had never imagined.”

After Zamora’s visit, my classes discussed what it meant to be an immigrant or from a family of immigrants. We vented about the unfairness of it all, the push and pull of people and commerce, the negative stereotypes, the hassle of paperwork, the power of words and laws and the paper they are printed on. Then we took matters into our own hands, using keyboards, colored pencils, and art paper. We wrote stories and poems and comic books about our lives. We reimagined our visibility, our voicelessness, and our pain. In the most banal of places—a high school classroom in an ignored neighborhood—we uncloaked our invisible yet too visible lives. Most importantly, we did it on our own terms.

A few weeks ago, I ran into Zamora at a writing conference. Since visiting my class, he has completed his MFA in poetry at New York University, won a National Endowment of the Arts grant, and then received a prestigious Stegner Fellowship at Stanford University. A second book of poetry, Unaccompanied, is forthcoming. The NEA grant prompted an immigration lawyer to take up his case. The fellowship will most likely mean a Green Card due to an “Extraordinary Ability Visa”—which sounds like something out of a comic book.

I was ecstatic to hear that my friend would not have to leave the country—but angry at the irony of it all: He had to write poetry about being undocumented in order to receive his documents. I thought of Itzel having to save up $1,600 to renew her Deferred Action status while now double majoring in math and political science. I pictured Paola in her fatigues literally marching for her papers. I remembered an undocumented student named Jacqueline, one of our valedictorians my first year in South L.A. She was accepted to a number of colleges, but her status limited financial aid grants. She ended up at a local community college and bitterly watched her friends go off to other schools.

I remembered how at the end of the Vietnam War, my refugee family was technically undocumented for a time. I thought of the seven million current Syrian refugees with no clothes, shelter, or documents.

Sitting next to Zamora at the conference, listening to poets read different kinds of documents—poems about war and exile and bearing witness—I hugged my friend and wiped tears from my eyes, emotional about the possibility of my students being truly visible one day.