Not too long ago, historians of the American West joined their artistic brethren in celebrating what we now think of as the “Old West.” For historians and artists, the “winning of the West” was a glorious achievement that heralded the triumph of “civilization” over “savagery.” Indeed, by the conventional scholarly wisdom and orthodox artistic vision,

the vanquishing of Indians and the march of manifest destiny made America great and made Americans special.

In recent decades, however, most historians—and many Americans—have rejected this perspective. Dismantling cherished fables about the Old West and stripping the romance from the history of “Westward Ho,” newer studies have exhumed the human casualties and environmental costs of American expansion. Offering little glory, these interpretations of how the West was lost have accented the savagery of American civilization.

The de Young Museum’s exhibition, “Ed Ruscha and the Great American West,” and its companion, “Wild West: Plains to the Pacific” at the Legion of Honor—both in San Francisco—invite us to scrutinize both the celebration and its demise. In many ways, this revisioning of western American art parallels alterations in the content and meaning of western American history. In both art and history, longstanding and powerful myths have fallen as subjects have broadened and contemporary viewpoints have shifted.

Back in the 19th century, celebrations of territorial expansion were commonplace among American historians. In his multi-volume account of The Winning of the West and other historical writings, Theodore Roosevelt admitted that the shedding of blood was not always “agreeable,” but deemed it the “healthy sign of the virile strength” of the American people. As president of the American Historical Association and as president of the United States, Roosevelt exulted in “our manifest destiny to swallow up the land of all adjoining nations who were too weak to withstand us.” He judged it “desirable for the good of humanity at large that the American people should ultimately crowd out the Mexicans from their sparsely populated Northern provinces” and wrest the rest of the West from Indians.

Popular as Roosevelt’s histories were in his time, it was his contemporary, Frederick Jackson Turner, who put forward the interpretation that gained enduring scholarly traction. Most prominently in his 1893 essay on “The Significance of the Frontier in American History,” Turner assigned westward expansion the central role in the history of the United States. He contended that it had not only enlarged the nation’s territory, but had also accounted for the individualistic and democratic character of its people and its institutions. In Turner’s view, the process of moving west separated Americans from their European roots (and in Turner’s imagination, the designation “American” referred exclusively to people of European ancestry). From what Turner and his contemporaries referred to as the “Great American West” then sprang the sources of American exceptionalism and American greatness.

Subsequent generations of historians of the American West took their cues from Turner’s “frontier thesis.” Some echoed it. Some extended it. Some amended it. Through the first half of the 20th century, however, few sought to challenge Turner’s belief in the fundamental importance of the frontier to American development or to question the exaltation of westward expansion.

That has changed over the last half century. Protests against the Vietnam War and the spread of various civil rights movements had a profound impact on the interpretation of American history in general, and western American history in particular. If American expansion led to Vietnam, a conflict that drew frequent metaphorical comparison to the supposed lawless violence of the “Wild West,” then it was not something to be cheered. At the same time, liberation struggles at home inspired historians to look beyond the white, male protagonists who had previously dominated frontier epics. In step with other American histories, scholars of the American West turned their attentions to the expectations and experiences of the unsung and the undone.

With a wider cast and an anti-imperial angle of vision, interpretations of the western past veered from the triumphant to the tragic. The titles of the two most influential surveys of what came to be called “the new western history” attested to this shift in orientation: The Legacy of Conquest by Patricia Limerick (1987) and It’s Your Misfortune and None of My Own by Richard White (1991). Synthesizing scholarship from the 1960s, 1970s, and 1980s, these books asserted that conquest and its legacy brought misfortunes aplenty to the defeated and even to the supposed victors. The more general misfortunes traced to the environmental blowback that followed efforts to turn the land into what it was not, to transform a mostly arid and sparsely populated region into an agricultural “garden” and a home for multiplying millions of residents.

In the revisionist mirror, the Great West didn’t look very great anymore, a gloom and doom view that not all historians, and certainly not all Americans, embraced. Critics claimed the new western history overlooked the achievements and exaggerated the evils of American expansion. The unbalanced exposition, complained the novelist Larry McMurtry, unfairly presented the western past as an unrelenting course in “failure studies.”

Similar debates erupted among art historians and grabbed much public notice in 1991. That year, the Smithsonian’s National Museum of American Art presented “The West as America: Reinterpreting Images of the American Frontier, 1820-1920.” In the exhibition, the curators challenged both the realism and the romance of western art. According to the exhibition’s gallery guide, the assembled works—which included masterpieces by the most renowned artists of the American West—were “not so much records of activities or places” as they were “a means of persuading people that westward expansion was good for the nation and would benefit all who participated in it.” This proposition put western art and western artists in the service of manifest destiny, an ideology that led painters, sculptors, and photographers to mask “the problems created by westward expansion.”

“The West as America” exhibition was quite controversial. Some visitors limited their vitriol to the comments book in the gallery. Others vented their outrage in op-ed pieces. In response to the uproar, several congressmen demanded that the National Museum of American Art be defunded for allowing this blasphemy to be perpetrated against western art. That campaign failed, but the planned national tour of the exhibition was cancelled. 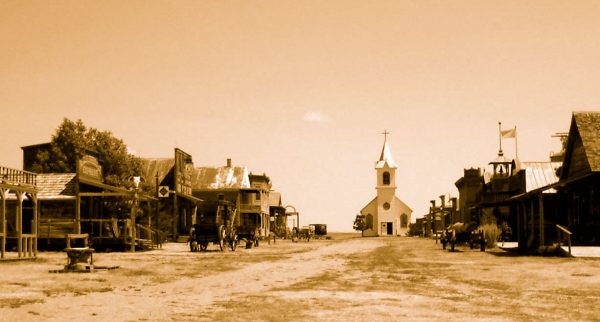 In terms of public notice, by far the greatest impact of changing views about the history of the American West registered at the movies. The social currents emanating from the 1960s that rewrote western histories and reinterpreted the meaning of still images also dramatically upended the art of motion pictures. For decades, “Westerns” ruled Hollywood. “Epics” and “B-westerns” filled movie theaters from the 1920s to the 1950s—and dominated American television programming in the 1950s. But during the 1960s, traditional, heroic Westerns began losing their popular appeal. Far fewer were produced. Those that were often inverted the genre’s conventions about heroes and villains and the righteousness of violence and manifest destiny. In landmark films such as Sergio Leone’s The Good, the Bad, and the Ugly (1966), Sam Peckinpah’s The Wild Bunch (1969), Arthur Penn’s Little Big Man (1970), and Robert Altman’s “McCabe and Mrs. Miller” (1971), the Old West became a stage on which 1960s critiques of American capitalism and imperialism played out. Arguably, though, the reversing of traditional western roles did not reach its apotheosis until 1991 when Dances with Wolves won eight Academy Awards.

Dances with Wolves reigned at the box office and at the Oscars, but over the last quarter century, the best historical scholarship has aimed at more than mere inversion of old myths about the Old West. One important direction has been to compare and connect what happened in the American West with parallel places and processes elsewhere. Departing from Turner’s claim that the frontier set the U.S. apart from its European roots, historians of the American West have instead emphasized the commonalities between American and other “colonialisms.” More specifically, the construct of “settler colonialism” has emerged as a key to situating the American experience in a broader global context. Further depriving the American West of its uniqueness, historians have adopted the lens of “ethnic cleansing,” or worse “genocide,” to understand American expansions and the accompanying displacement and sometimes devastation of indigenous peoples.

The most compelling western histories written in the last quarter century confront the complexities of past and present. This begins with the recognition of how deep that past is, with histories that commence well before the West was American and with excavations that reveal the diversity and dynamism of Native America prior to the arrival of European colonizers. From archaeological and other sources, historians have now recovered rich precolonial worlds and complex societies that continued after Indians encountered people from Europe and Africa, weaving a fascinating new understanding of how natives and newcomers met and mingled.

Rescuing indigenous people from the condescension of New Age romanticism that turns them into ever peaceful, perfect ecologists, newer histories have shown how Indians not only resisted European colonialism, but also in some parts of North America carried out their own expansions. The best of these newer western histories detail as well how prolonged interactions resulted in ethnic crossings as well as ethnic cleansings. Most visibly, this intercourse produced mixed-race offspring, but historians have also tracked a wide range of exchanges that led to a blending of cultures. Such amalgamations have remained a hallmark of western American cultures in the 20th and now the 21st centuries

The history of the American West, like the art of the American West, isn’t what it used to be. No doubt, many lament the changes and pine for the myths that western histories (and western art) once celebrated. But if we are to make sense of the West’s multi-faceted evolutions and figure out how we can live together, and live sustainably, in this region, we don’t need one-dimensional tales. Rather we need histories and art that respect the past, wrestling, as historians and artists must, with the complexities that challenge us still.