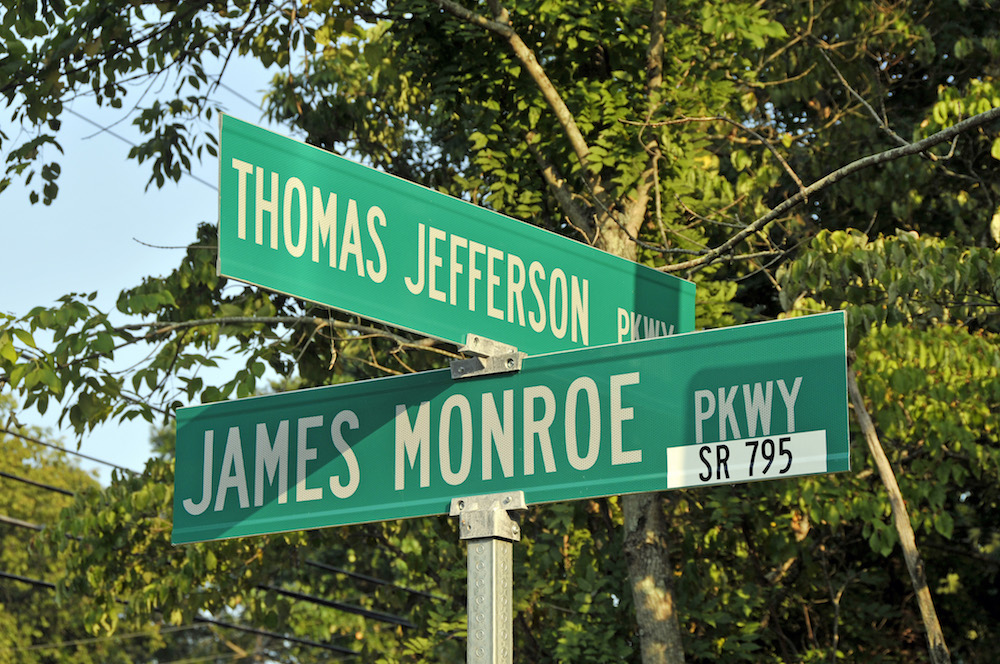 On April 19, 1800, the administration of President John Adams brought Thomas Cooper—a lawyer, newspaper editor, and political refugee who had fled England to avoid prosecution for his democratic beliefs—to trial in a Philadelphia courtroom.

Twenty-four years earlier, next door in Independence Hall, brave men had declared to King George the right of the people to alter their government. Now, just days before a crucial New York vote in the 1800 presidential contest, Cooper stood charged with having “falsely” published criticisms of Adams’ policies “to arouse the people against the President so as to influence their minds against him on the next election.”

The capital’s high and mighty—the president’s private secretary, Cabinet members, prominent congressmen—thronged the courtroom. This was no election-year sideshow; it was political strategy in action. The newspapers popping up across the Republic, rudely partisan, were the heartbeat of public life in the new nation. The Republican press was vital to Vice President Thomas Jefferson and his party in their campaign to oust Adams and the Federalists from the presidency. None understood this better than Secretary of State Timothy Pickering, who faced Cooper from the bench. There he sat alongside Supreme Court Justice Samuel Chase—presiding judge and persecutor hip to hip. Pickering, kingpin of the administration’s effort to gag its foes, would bring 17 sedition indictments, including against the editors of the leading Jeffersonian papers.

Every presidential election matters. But only a few have offered a choice of fundamental principles, in ways that seemed fundamental at the time, and not just in retrospect. The election of 1860, which led to Civil War, tops that list. The election of 1800 follows close behind. In 1800, as in the courtroom that spring day, two visions of the meaning of the Revolution and the Constitution butted heads.

As Cooper told the jury, “this country is divided, and almost equally divided, into two grand parties.” Jefferson’s Republicans might have been queasy at the rise of those parties but Adams’ ruling Federalists were horrified.

They had written and ratified the Constitution to quell what they saw as the excesses of democracy and faction unleashed by the Revolution. Their Constitution had created a strong federal government, which took power away from state legislatures they judged too responsive to calls for debt relief, paper money, and lower taxes. They believed the presidency and the Senate, indirectly elected from among the best men, would check popular enthusiasms arising from the directly elected House of Representatives. The people would go to the polls every two years, choose among the candidates offered to them, and then go back, quietly, to their private lives, leaving their betters to govern them.

These [elections] stretched out over a year in a polarized nation where Federalists and Republicans sang different songs, applauded different plays, used different forms of address, and read different newspapers.

It didn’t work out that way. In the 1790s Americans grew more energetic in pursuit of money, more heterodox in religion, more noisy in politics, and less deferential to gentlemen. When French revolutionaries took up the self-evident truths proclaimed in the Declaration of Independence, some Americans wore the French tricolor on their hats and joined Democratic Societies. Those who had opposed the Constitution as a threat to liberty were joined by those, like Jefferson and James Madison, who had supported the Constitution but now saw Alexander Hamilton’s Federalist program of debt funding, taxes, and manufacturing promotion as re-creating the overweening state and monarchal corruption they had just thrown off.

These differences simmered while George Washington, the untouchable hero, remained president. They boiled over under his successor Adams, particularly after the revolutionary French government in 1798 treated American diplomats and ships as roughly as England had for years.

In that crisis, Republicans urged meeting insult with caution. Adams and congressional Federalists instead prepared for war, against foes both abroad and at home. They built up the navy and, at Hamilton’s instigation, created a permanent army of 12,000 troops, with himself as organizer and effective commander, and a “Provisional Army” of 10,000, to be activated in case of invasion or emergency. What purpose a large army would serve was never clear—Adams himself thought a French invasion implausible—and even some Federalists shared Republican fears of Hamilton’s intentions. To defray the expense, they passed a direct property tax on houses, land, and slaves.

Once eager for immigration to bolster the economy, Federalists by 1798 eyed immigrants as enemies within. As a Federalist congressman put it, they did “not wish to invite hordes of wild Irishmen, nor the turbulent and disorderly of all parts of the world, to come here with a view to disturb our tranquility …” Under the terms of a new Naturalization Act passed in June, aliens would have to wait 14 years instead of five to become citizens. (An initial version would have forever barred naturalized citizens from voting—new citizens had a nasty habit of backing Jeffersonians.) A companion Alien Friends Act, passed a week later, authorized the president, without giving a reason or holding a hearing, to expel any immigrant.

Finally, on July 14, 1798, Adams signed the Sedition Act, under which Cooper was prosecuted. The law made it a crime to “write, print, utter or publish … any false, scandalous, and malicious writing” against the government, president, or Congress with the intent of bringing them “into contempt or disrepute.” Or as the Federalist Boston newspaper Columbian Centinel summarized it, “It is patriotism to write in favor of our government—it is sedition to write against.”

Thus were stark lines of division drawn for the 1800 presidential election, which played out under rules unfamiliar to modern voters. As today, winning required a candidate to gain a majority of electoral votes. Unlike today, most electors were still chosen by state legislatures. (Citizens directly voted for presidential electors in only five of the 16 states.) Each elector cast two votes, with the leading vote-getter becoming president, the runner-up vice president. There was no single presidential vote on a single day in 1800, rather a series of individual state legislative elections. These contests stretched out over a year in a polarized nation where Federalists and Republicans sang different songs, applauded different plays, used different forms of address, and read different newspapers.

What’s striking is how much more clearly a partisan press framed the issues of 1800 than today’s elite media has in our current election, where coverage elevates petty scandal and character over the substance of policy.

What’s striking is how much more clearly a partisan press framed the issues of 1800 than today’s elite media has in our current election, where coverage elevates petty scandal and character over the substance of policy.

Readers in 1800 did not go wanting for character slams, of course. The Gazette of the United States held up to Jefferson his “want of fortitude and total imbecility of character, which have marked your whole political career.” But for all the attention to character, no regular reader of the press could mistake the fundamental party choice at hand. An expensive navy, a standing army, the property tax and the national debt, the Alien and Sedition Acts—for or against.

As Thomas Cooper himself told his jurors before they convicted him to six months in prison, one party “thinks that the people, (the Democracy of the country) has too much, the other, too little influence on the measures of government.” He might have added that one party was unprepared to accept the legitimacy of organized opposition parties and the regular transfer of power between them. Federalists “were doing something more than moving against ‘sedition …’” historians Stanley Elkins and Eric McKitrick write. “[T]hey were striking out furiously at parties in general, in a desperate effort to turn back the clock.”

The contest came down to the last two days before the Dec. 3 deadline for balloting by the presidential electors. In Pennsylvania, a legislature divided between a Republican lower house and a Federalist senate cut a deal to split its votes, giving eight to Republicans and seven to the Federalist ticket. With the two candidates tied nationally with 65 electoral votes apiece, the South Carolina legislature handed victory to the Jefferson and the Republicans.

Unexpectedly—and potentially disastrously—none of the Republican electors, as intended, cast his second vote for someone other than Aaron Burr, Jefferson’s running mate. Jefferson and Burr tied, sending the election to be decided by the Federalists who controlled the lame-duck House of Representatives. After months of plotting and dozens of ballots, a handful of Federalists abstained from their leaders’ effort to elevate Burr, and Jefferson prevailed.

In the preface to the transcript of his sedition trial that Thomas Cooper published from his prison cell, he posed a question to voters. “Ask yourself …, is this a fair specimen of the freedom you expected to derive from the adoption of the Federal Constitution? And whether the Men who can sanction these proceedings, are fit objects of re-election?” Voters answered more decisively than the close electoral vote suggested. They elected Republicans to 67 of the 106 House seats. Federalists would never again control the House or come close to winning the presidency. Jefferson called it the “Revolution of 1800.” Few historians have disagreed.

As in 1800, voters this year face a choice, perhaps of equal historical significance, about whether to turn back the clock—on immigration, religious tolerance, racial equality, health care, the NATO alliance, nuclear proliferation, even on protecting the press against the kind of libel action brought against Cooper. Were Cooper to come back, he might well ask himself—in this age of cable news, of clicks and tweets, of professional nonpartisan reporters, how well do voters of 2016 even know it?