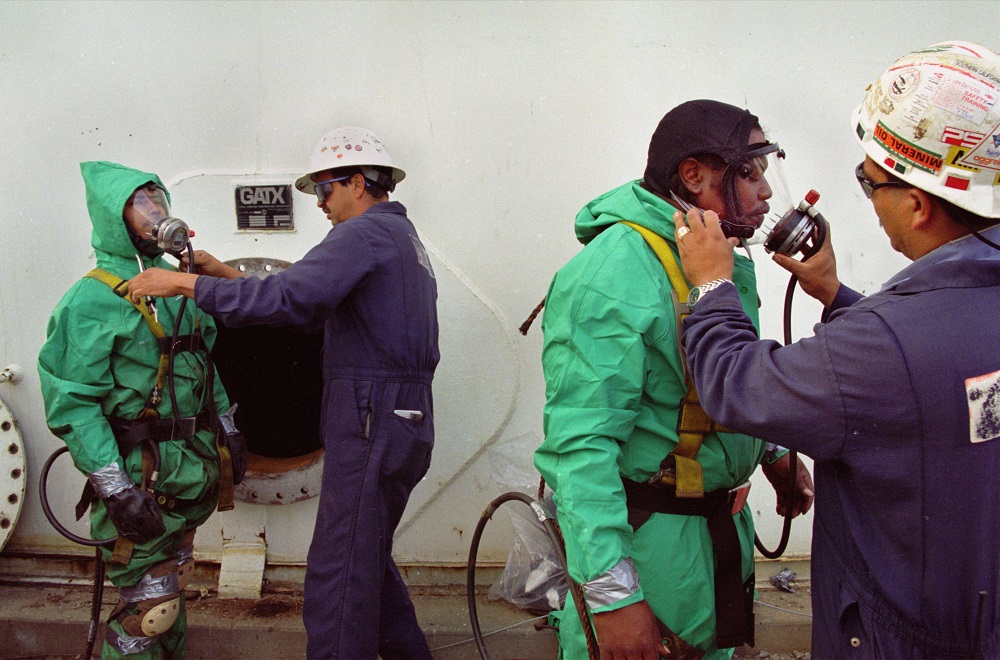 Four years ago, Chevron’s oil refinery in Richmond, Calif. was the scene of an industrial disaster. An 8-inch diameter pipe carrying fuel oil ruptured, releasing a burst of flammable vapors that quickly expanded 100 meters in all directions, engulfing 19 refinery workers. Less than two minutes later, the vapor ignited into a massive fireball and a plume of smoke and toxic gases that spread over the northeastern Bay Area.

During that brief window, 18 of the workers crawled to safety through a blinding atmosphere of hot, flammable vapor. The last worker, a Chevron firefighter, climbed into the cab of his engine moments before the flames rolled over it. He survived. But the disaster wasn’t confined to the plant: In the following days, some 15,000 people in the communities downwind of the plant sought medical attention for symptoms of exposure to smoke and fire gases.

For 33 years, my grandfather, Ed Wilson, worked as an engineer at the Union Oil refinery in what was then the town of Oleum, near the city of Hercules. He was the son of Swedish immigrants and a graduate of Cal Tech, and he worked long hours making sure the plant ran safely, without fail. If he were alive today, I think he would be dismayed to learn what happened at Chevron.

In the years leading up to the fire, Chevron’s managers heard from their own engineers, via at least six different reports, that pipes in the plant’s massive crude unit were corroding and needed inspection and replacement, according to the report published by the US Chemical Safety and Hazard Investigation Board. Managers ignored those warnings, even after a corroded pipe failed in 2007, causing a fire that injured one worker and sent out an alert asking people in the surrounding community to stay indoors. By 2009, Chevron engineers warned of the potential for a “catastrophic failure,” and still managers deferred action.

Chevron’s corporate negligence was nothing short of willful; by sheer luck, they avoided burning and killing 19 people who were just keeping the refinery running, like my grandfather did.

The silver lining of the Chevron refinery story starts in the Governor’s Office. Just days after the incident, Governor Brown assembled an interagency working group to assess the state’s refinery safety regulations. Now—four years later—the state’s redrafted regulation is poised for adoption. As chief scientist in the state’s Department of Industrial Relations, I helped draft the regulation, and I continue to follow the issue in my work with the BlueGreen Alliance, a national coalition of labor unions and environmental organizations.

If enacted, the regulation will enable plant engineers and other experts—including union safety representatives—to identify hazards and correct them, not with temporary patches or other Band-Aid measures, but with high-quality engineering solutions known collectively as “inherently safer technologies”. Reinforced with deadlines and reporting requirements, along with the enforcement teeth of the state’s Division of Occupational Safety and Health (DOSH), the regulation should make it nearly impossible for plant managers to drive a refinery to the point of failure.

… the explosion caused a statewide 40-cent-per-gallon increase in the price of gas and—in the first six months alone—a $6.9 billion contraction in the California economy.

This is hardly radical. In essence, the 12,000-word proposal requires the state’s refineries to adopt the industry’s own best engineering practices. Using cars as an analogy, the proposed regulations will require the driver to follow the vehicle’s preventive maintenance schedule, rather than driving the car until the wheels fall off or the engine blows up.

While staffers at the DOSH and the California Environmental Protection Agency (Cal EPA) labored to draft the new regulation, mismanagement at the ExxonMobil refinery in the Southern California city of Torrance caused an explosion on February 2015 in the plant’s electrostatic precipitator. Contractors working on this multi-storied structure survived, again mostly by luck. The explosion sent tons of industrial dust into the community up to a mile from the plant, and flying debris narrowly missed striking a tank containing tens of thousands of pounds of highly toxic hydrofluoric acid. Given the 330,000 residents, 71 schools and eight hospitals located within three miles of the plant, the U.S. Chemical Safety Board later concluded that a significant release of the acid, which vaporizes if released from its container, had “the potential to cause serious injury or death to many community members.”

The state’s OSHA program issued six “willful” violations against ExxonMobil because—like Chevron—the company had failed to “take action to eliminate known hazardous conditions at the refinery.” The company is appealing.

Again, damage was not confined to the plant alone. During the year the refinery was off-line, it was not producing the gasoline that the state’s economy requires. An analysis by the RAND Corporation concluded that the explosion caused a statewide 40-cent-per-gallon increase in the price of gas and—in the first six months alone—a $6.9 billion contraction in the California economy.

Governor Brown’s proposed regulation is clearly overdue, and yet it still faces opposition. The Western States Petroleum Association—representing refineries—is challenging the regulation’s scope and is pushing hard to scale it back. On the other hand, a coalition led by the United Steelworkers union (representing most refinery workers) and the Sierra Club, together with two dozen other organizations, is seeking to strengthen the regulation by reinstating deadlines and other accountability measures that were dropped from the final draft.

By placing his hand firmly on the side of the coalition, the Governor would side with good engineering practice and with a regulation whose strength might begin to match the seriousness of the risks facing refinery workers and neighboring communities. If he takes that action, he’ll also be stepping up for a nation that is in serious need of leadership on industrial safety.

In 2012 alone, the U.S. Chemical Safety Board tracked 125 significant process safety incidents at the nation’s petroleum refineries. Every two-and-a-half days, our nation experiences a major industrial chemical release. Nearly 23 million Americans live within one mile of a hazardous industrial facility. The regulations governing these facilities have not been updated since the early 1990s, when they were adopted in response to the 1984 industrial disaster in Bhopal, India, where a late-night leak of methyl isocyanate at the Union Carbide pesticide manufacturing plant killed thousands of people—most of whom were sleeping at the time.

The new regulation, in its strongest form, might give the industry’s corporate leaders heartburn, but there is no question that—at some point in California’s future—it will save lives. With a nod to Bhopal, to Richmond and to Torrance, California is on the cusp of reinventing industrial safety by making it much harder for corporations to dismiss the insights of engineers and plant operators. I think my grandfather would read the Governor’s proposal and smile.