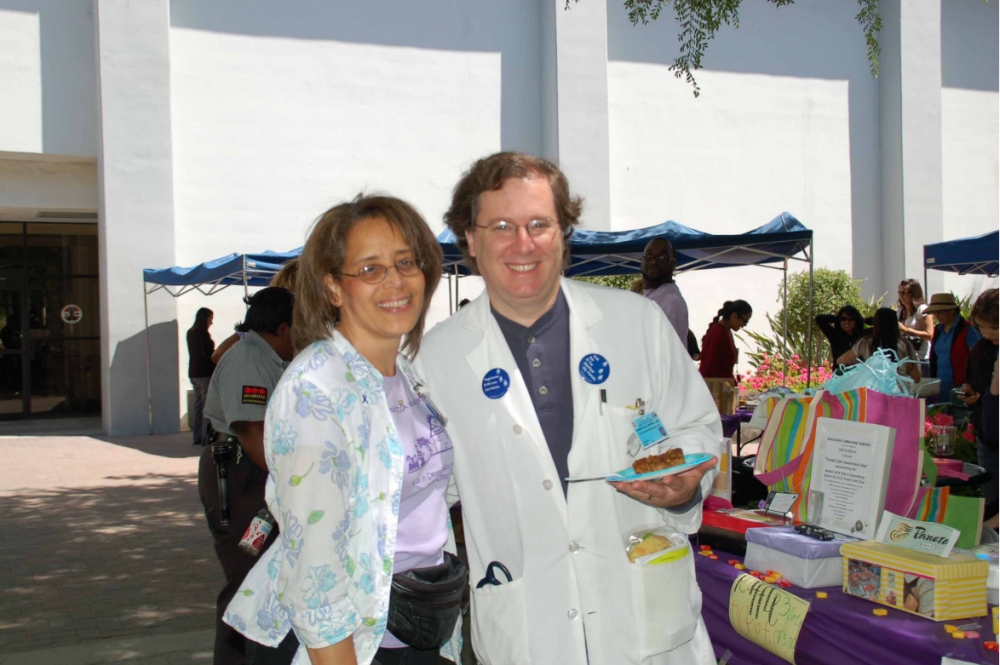 Neither the foster care clinic room nor my teen patient was typical.

The ocean-blue walls were covered with a marine mural with a Rastafarian sea god on one wall and a blond surfer girl catching a foamy white wave on the other. Seventeen-year-old MT was obese and laden, not so much by her size but by the visible pain in her eyes. Yet she was thoughtful and good-humored, with a ready smile.

“Remember that rule, no child left behind?” she said. “I was left behind.”

She was right. She had been abandoned by all of the adults meant to care for her. I had to leave the room—I didn’t want her to see me cry.

Los Angeles County has the largest foster care population in the U.S. Annually, more than 25,000 children and teens younger than 18 years are under the supervision of the Department of Child and Family Services. These are our county’s most vulnerable children. Like MT, nearly all of them have been abandoned in some way—emotionally, physically, by their biological parents, or by the system. Most have also been neglected, abused, or living in violence.

Nationwide, about three out of four of children entering protective services have unmet medical, mental, or developmental health care needs. Foster children have high rates of malnutrition ranging from failure-to-thrive to obesity. They have missed immunizations, and had poor care for chronic conditions, such as birth defects and asthma. Some children have severe dental disease, including caries and tooth abscesses. Up to 60 percent of children entering foster care have developmental delays, cognitive impairment, or require special education services. Childhood trauma and adversity underlie many of their health issues, though mental health care can be hard to come by. And the uncertainties of foster care often worsen all of these problems.

In 2006, in response to a class action lawsuit, Los Angeles County committed to improving health care and placement stability for children under their watch. That year, I joined forces with Dr. Sara Stewart, a specialist in caring for abused children, to open a clinic for foster children—from 2006 through 2014, I was the medical director of the Kids In the Dependency System (KIDS) Foster Care Clinic at Harbor-UCLA Medical Center.

In that role I provided care for thousands of children, but MT stands out in my memory because she was so determined to make her life better—even becoming president seemed possible. I first saw MT the year after the clinic opened. She preferred her initials (they are changed here to protect her identity) to her birth name, which she contended “sounds too much like leukemia—who wants a name that sounds like cancer?” A name she hated was all she had left from her birth mom. MT had been a foster kid under county care since she was three years old. She didn’t know the details; neither did I. MT’s care included weight management and psychological referral for grief and PTSD. As her pediatrician, it was my job to help her be healthy so she could reach her goals.

These are our county’s most vulnerable children. Like MT, nearly all of them have been abandoned in some way—emotionally, physically, by their biological parents, or by the system.

For nearly 14 years, MT had lived with an elderly legal guardian—the only “mom” she had known—who had recently died. MT reported that subsequently her guardian’s adult daughter instigated a physical fight with her. MT thought the daughter did this to justify sending her back to the county, so she wouldn’t have to share her mother’s small inheritance. So, a few weeks shy of her 18th birthday and only two days before her high school graduation, MT was back “in the system.” The only person she could think of to invite to watch her receive her diploma was her caseworker.

The clinic where I saw MT was part of a countywide “Hub” system developed in 2006, post-lawsuit, by county Departments of Health Services and Mental Health, dedicated to caring for foster children. The Hubs serve as the “center of the wheel” of medical care, with the “spokes” being linkages to community services. Hubs were established at five county facilities, Harbor-UCLA Medical Center, Olive View Medical Center, LAC-USC Medical Center, Martin Luther King Health Center and High Desert Regional Health Center. Children’s Hospital Los Angeles served as an additional site.

In 2015, 88 percent of kids newly entering DCFS had an evaluation at a Hub. Almost all of them underwent mental health screening and 86 percent had a mental health need identified and received psychological services.

The Hub system’s coordinated care is a big improvement over the fragmented approach that came before, but it has not been without flaws. Demand is high, and some children have waited up to six weeks for first visits, which are DCFS-mandated to occur within 30 days of placement. Some foster parents have to travel to get to a Hub appointment because their assigned Hub may be far from the child’s placement. For example, if a child is detained in Torrance in the South Bay of Los Angeles, the Hub appointment will likely be at KIDS Clinic near there. But the child may be placed in a foster home in Lancaster, a 90-minute drive, one way, in “moderate” traffic.

Despite their challenges, the post-lawsuit panel responsible for monitoring the county’s compliance with the settlement identifies the Hubs as an invaluable resource. The panel has found that having health screenings and referrals for prompt treatments, including mental health services, is critical for the wellbeing of foster children.

As for MT, I’m happy to report that she went on to graduate from college. After that I lost touch with her, but I think of her often. In 2028, I’ll be looking for her name on the presidential ballot.