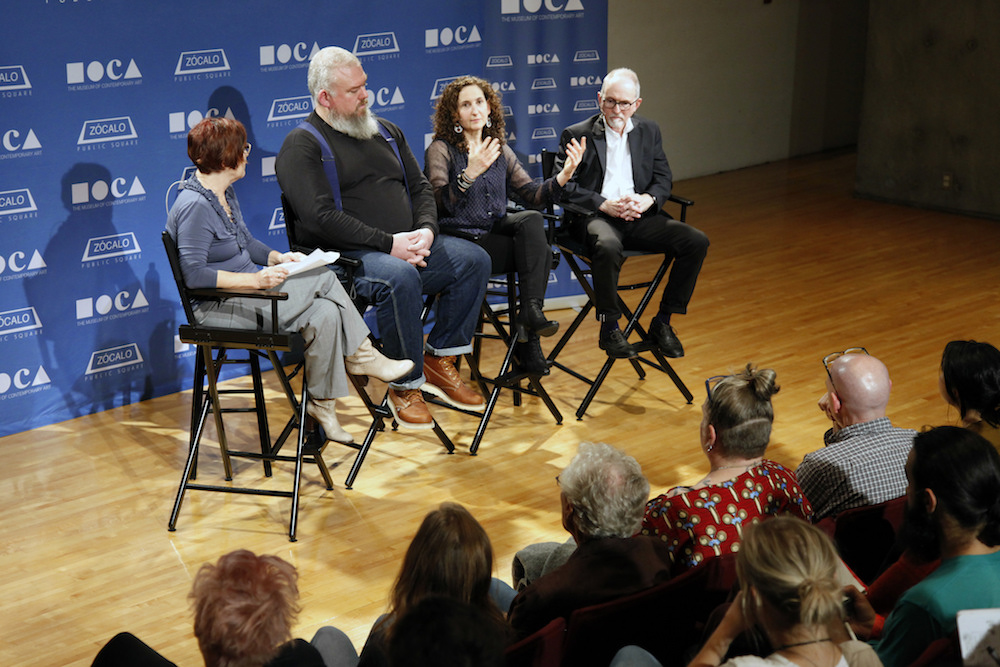 “Is it an obligation of the artist to address war in a time of war?”

Artillery editor Tulsa Kinney opened a Zócalo/MOCA discussion in front of an engaged and curious crowd at MOCA Grand Avenue in downtown Los Angeles with this question. After all, she pointed out, we live in a world of both Jeff Koons (“who makes balloon dogs”) and Thomas Hirschhorn, whose installation Chromatic Fire is currently on display at MOCA and who “finds it is his mission to shove the world’s malaise down our throats.”

Kinney turned first to panelist Ehren Tool, an artist and Gulf War veteran who has made over 18,300 ceramic cups since 2001 that he gives away for free. His work is heavily influenced by both his Marine Corps service and the fact that there are new generations who have returned from war, yet he said the subject of war is not for everyone. “I think it would probably be a bad idea to put the obligation on artists that they have to make any type of work,” he said.

Rhodes College art historian David McCarthy concurred. “The responsibility of artists is to be artists,” he said. “But if you are going to engage in thinking about war, whether through your art or through your activism, that carries certain responsibilities, one of which is to be informed.” He explained that “a high degree of skepticism” about the stories we’re being told by government and the media is embedded in the question of an artist’s responsibility. “What [artists] do best,” he said, “is to think critically and translate their criticism into things we can see that help us to process the world around us.”

In addition to the work of Hirschhorn, Picasso’s Guernica was another reference point for the discussion. Kinney pointed out that much of Picasso’s work wasn’t political; did he, she asked, feel a responsibility or need to respond to war at a certain point?

“Picasso’s life is one of contradiction,” said Karen Fiss, a professor of visual studies at the California College of the Arts. When Picasso lived in Paris during the Nazi occupation, she said, he fraternized with Nazi officers. “What gets dangerous is when one has a black-and-white narrative about any artist’s role or what their role should be vis-a-vis politics,” Fiss said. She explained that she had recently co-curated a project in reaction to the murders of young men of color across America. Fiss and her co-curator took care not to be exploitative, working on public programming with groups who were already involved in fighting police violence and examining their personal motivations. They focused on “the nuance and really thinking through the responsibilities.”

But what is the responsibility in making art, really? Tool said that he has been conscious of Guernica his entire career. “Hiroshima, Auschwitz, Falluja all came after that painting,” he said. “I just make cups. Nothing I do is going to change the world … but I don’t know what else to do.”

The major tension for many artists, the panelists agreed, is navigating between making a statement and being able to make money. “Artists have to pay bills and have to be honest to their muse,” said McCarthy. “Artists decide to make decisions based on revenue or where their heart is, or what politics are.” When artists do take a stance, their work “can serve a pretty powerful social function,” he said. “Maybe what art is is an opportunity for community-building in that immediate circle of two people in front of a work of art, or 20 or 200.” Art can play a crucial role in democracy, he added, by creating a space where “points of view are being shared.”

To do so, said Tool, “It has to be sincere.” Artists can’t parachute into communities but must work in communities that they’ve built a connection with.

But what about beautiful art, asked Kinney. Are artists doing their jobs if they’re making “just decorative work”?

The liberal bent of the art world, Fiss said, often hides “a deeply conservative impulse” to maintain the status quo. She added that the economic and political structures of the art world haven’t shifted, even if artists are politically engaged and artists from diverse backgrounds are being shown in more galleries and museums.

So, asked Kinney: What does a work like Hirschhorn’s installation, which incorporates headlines from recent wars in the Middle East and violent imagery, evoke?

“As much as I would rather forget that period of 2001-2008, what I value about Hirschhorn’s piece is the onslaught of information that, at least to a certain point, was seductive before Americans became profoundly aware of what was happening” in Iraq and Afghanistan and Abu Ghraib, said McCarthy. “To go back to that piece was to be reminded of that decade and that moment.”

In the audience question-and-answer session, the panelists talked about what art can do that other forms of media, such as reportage or social media, cannot.

“We tend to forget the importance of imagination,” said McCarthy. “We forget how powerful it is. We forget how radically disruptive imagination can be. Art gives us that.” Opinions can be dismissed more easily than things, he said. In devoting time to considering a piece of art, he said, “I am forced to break out of what my positions happen to be, whether or not I agree with what the artist is trying to say in their work. I find that potentially liberating and transformative.” 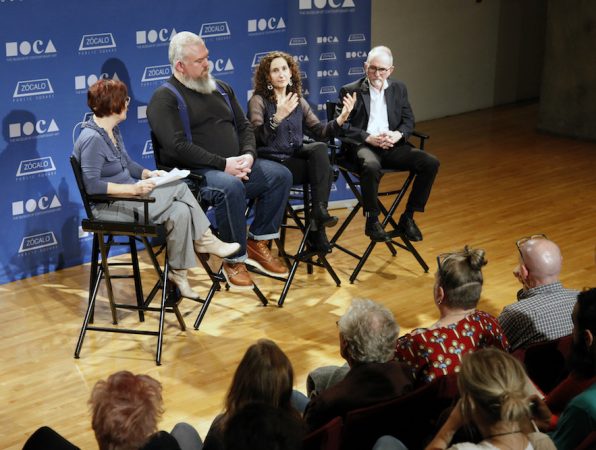 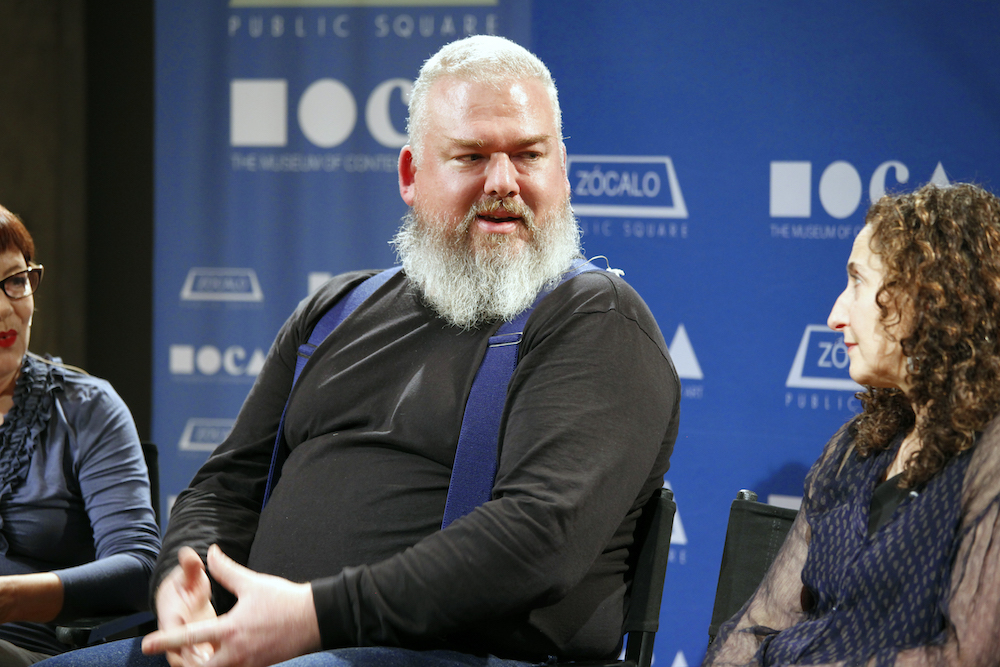 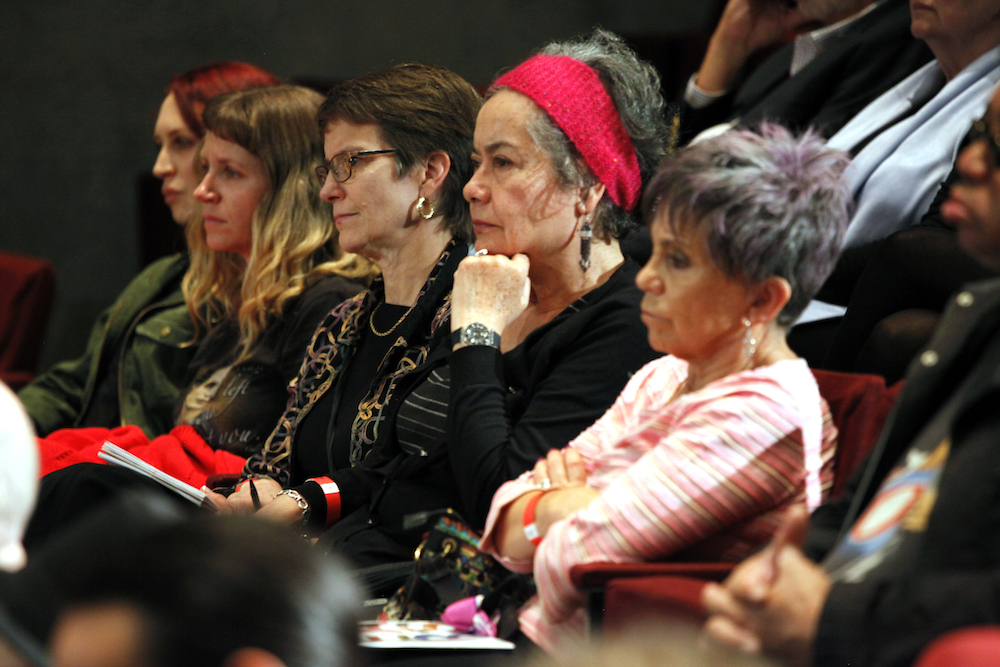 An engaged crowd at the Museum of Contemporary Art 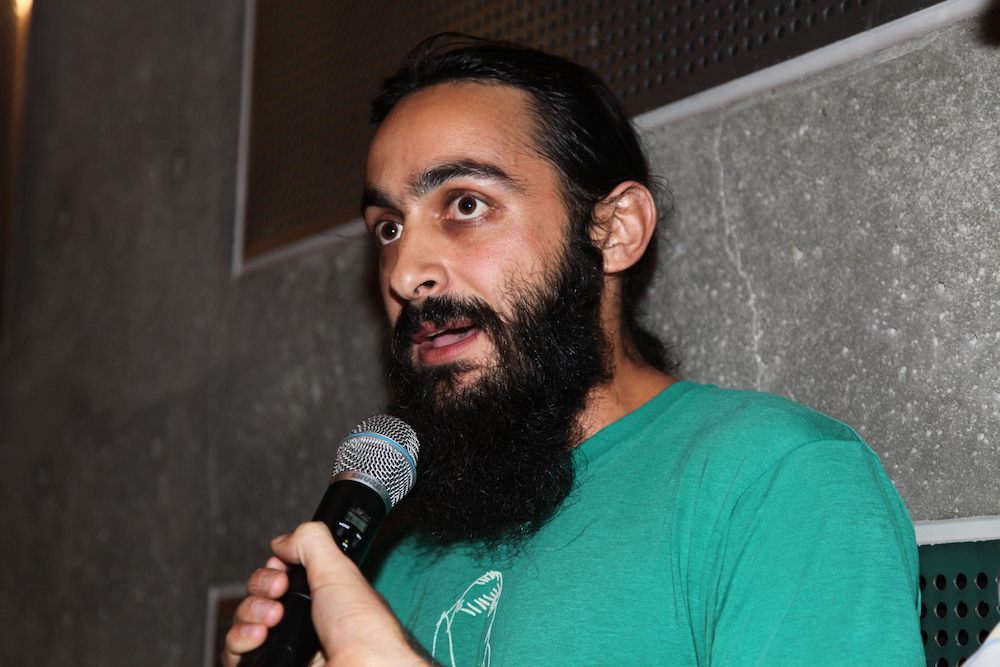 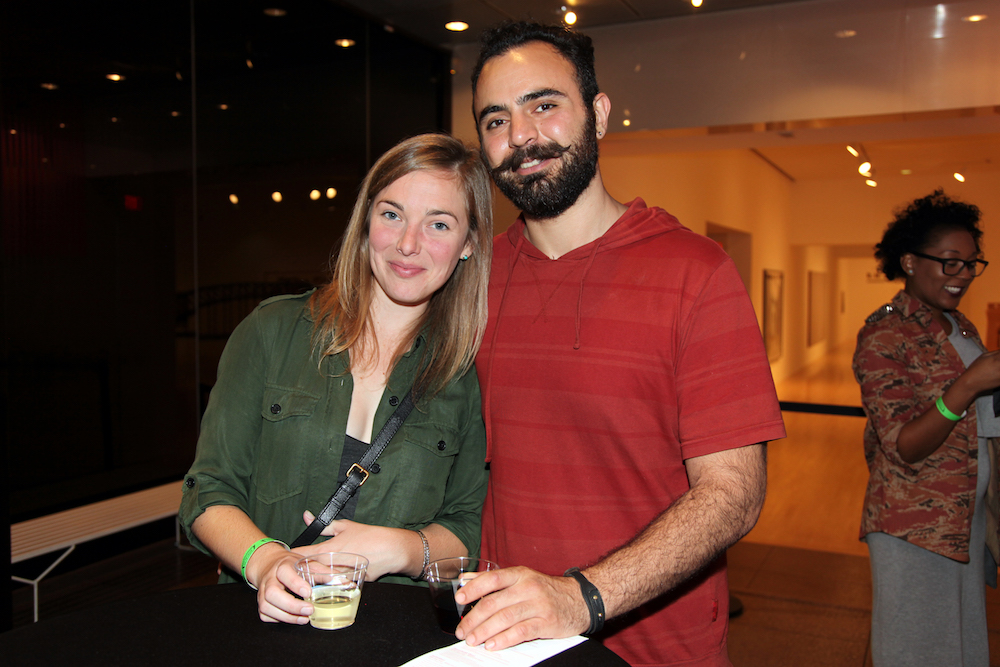 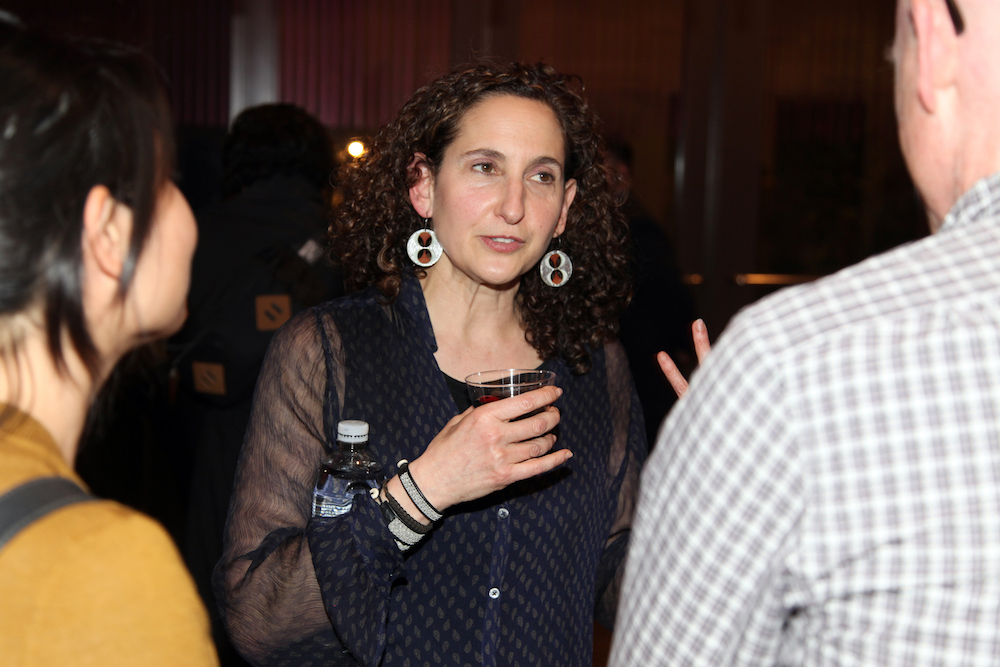 Karen Fiss, professor of Visual Studies at the California College of the Arts, talks with guests at the reception