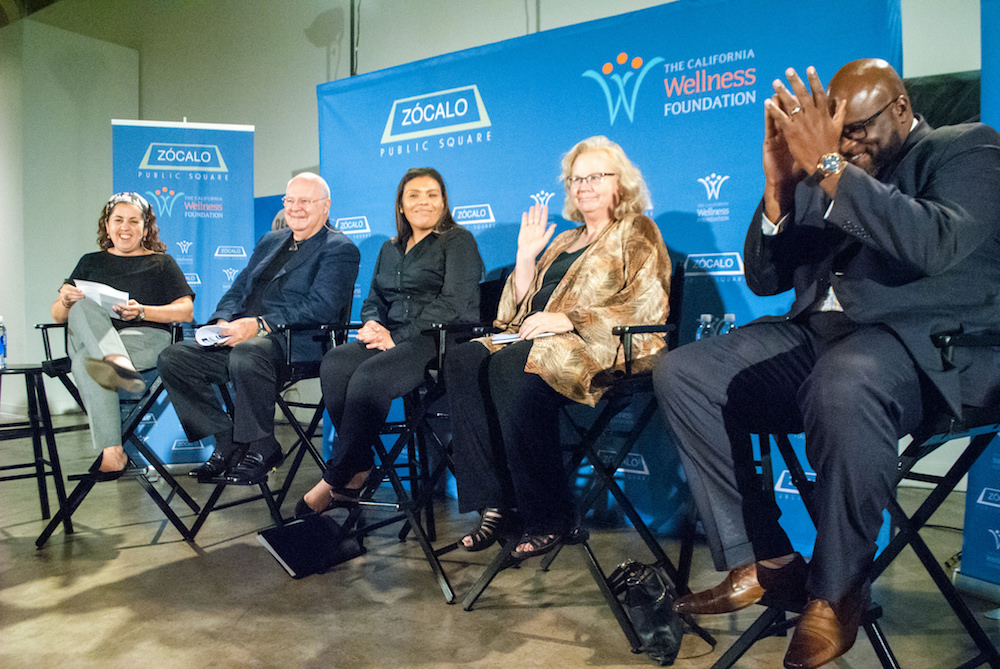 The Inland Empire is facing a boom in population growth that presents a challenge for increasingly sprawling communities. Still, the region remains optimistic and open to embracing positive change to create healthy neighborhoods.

Four panelists, each involved in different Inland Empire communities, shared their diverse perspectives on this topic at the Zócalo Public Square/The California Wellness Foundation event “Will the Inland Empire’s Sprawl Create the Community of the Future?” in front of a full house at the Riverside Art Museum.

The evening was framed by findings from The California Wellness Foundation’s Advancing Wellness Poll, which found that residents of Riverside and San Bernardino counties endure some of the nation’s dirtiest air and longest commutes. These communities also deal with low wages, which means they often work more, making it difficult to spend time with friends, family, and neighbors. Nevertheless, the evening’s spirit was one of hope from the beginning, when moderator and New York Times reporter Jennifer Medina asked the panelists how optimistic they are about the region’s future and why.

“I’m very excited about our region’s job prospects,” John Husing, a research economist, answered. He said the Inland Empire has added approximately 235,000 jobs recently, bringing the region to a total of nearly 100,000 more than before the recession.

Luz Gallegos, who works with the region’s immigrant population as community programs director at TODEC Legal Center, was also optimistic. She said she’s seen the immigrant community “wake up” and become politically engaged. “We’re very hopeful because at the end of the day that’s how you see change,” Gallegos said.

Medina pressed the panelists to consider one of the Inland Empire’s greatest challenges: How do you engage the community when it’s so widespread and disjointed?

“It’s one community at a time … If change is going to happen, you must start with the indigenous people,” Rev. Samuel J. Casey, executive director of Congregations Organized for Prophetic Engagement and a pastor at New Life Christian Church in Fontana, said. The other panelists agreed, emphasizing the importance of building relationships between individuals as well as across different organizations.

Greer Sullivan, a professor of psychiatry and the Founding Director of UC Riverside’s Center for Healthy Communities, pointed out that it’s not uncommon for people to feel like they don’t know their neighbors or like there is no “community” to begin with. But she had an idea for change: “I think the solution is to start small and build from there.”

Gallegos agreed, saying she’s seen the firsthand benefits of grassroots organizing. It helps to “get in the trenches” in order to know each community’s individual needs. Coachella, for instance, is very different from Riverside, she said.

“There are 4.4 million people in the Inland Empire spread across two counties,” added Husing. “There’s no center to it.” This disjointedness can make it challenging to deal with big problems. “In San Bernardino, 27 percent of children and 18 percent of all people are living in poverty,” he said. “These are catastrophic numbers.”

Sullivan said that there’s a link between poverty and health, and she has been encouraged that this is becoming more widely known and researched. However, the Inland Empire needs to address both at the same time. “Research shows that having close friendships, having close family or friends, is really critical,” she said. “Exercise is really critical. If you don’t have a safe neighborhood, you may not feel safe exercising.”

Gallegos agreed that paying attention to wellness is a necessity for positive community growth. “We live such fast and crazy lives; we are running from taking kids to school to trying to get to work. There’s really no time for wellness,” she said. “How can we work together as a team that will continue empowering the community—not only for our generation, but for future generations?”

The audience question-and-answer period also looked ahead in order to deepen the discussion. One audience member asked: How can people in the Inland Empire get better access to education?

Casey said there are two issues that need to be addressed. First, high poverty areas sometimes lack teachers with the training needed to address students who come to school hungry, or are suffering from PTSD. “The reality is that teachers are walking into classrooms trying to engage students that they are not prepared to engage,” he said. Second, he said, more attention needs to be given toward not just education but jobs in order to put an end to “the school to prison pipeline.”

Still, several of the panelists said they have seen improvement at schools where parents become involved at school board meetings. Ultimately, that’s the kind of action that all four panelists agreed can improve the region’s communities—a perspective best summed up by Gallegos’ closing remark. “By working together,” she said, “I think all of us can really make an impact in the Inland Empire.” 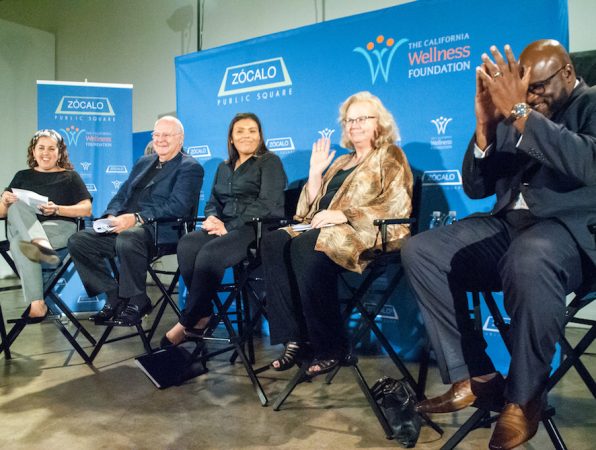 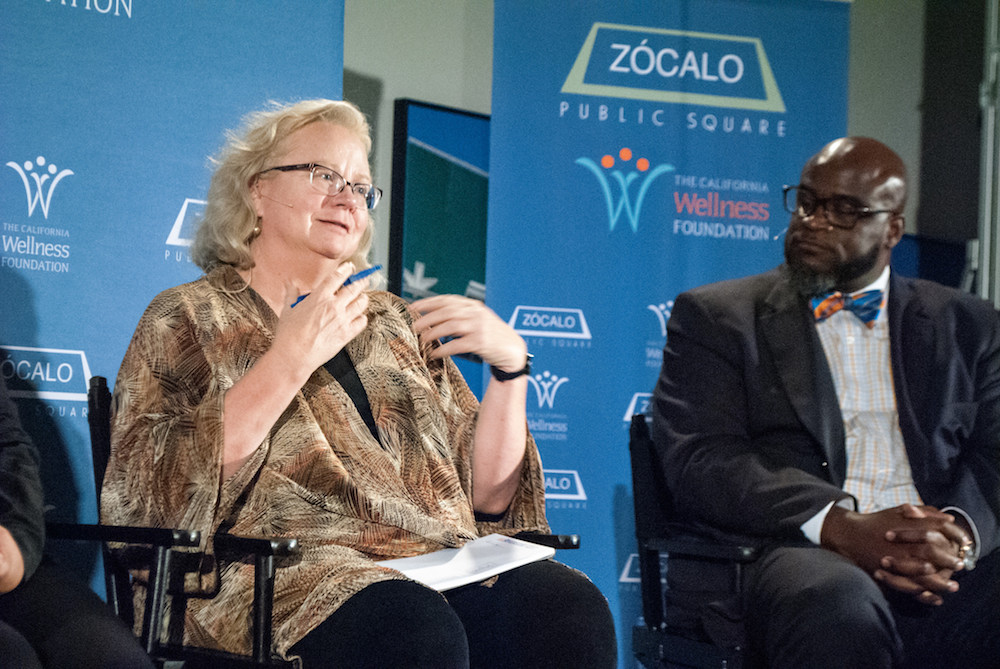 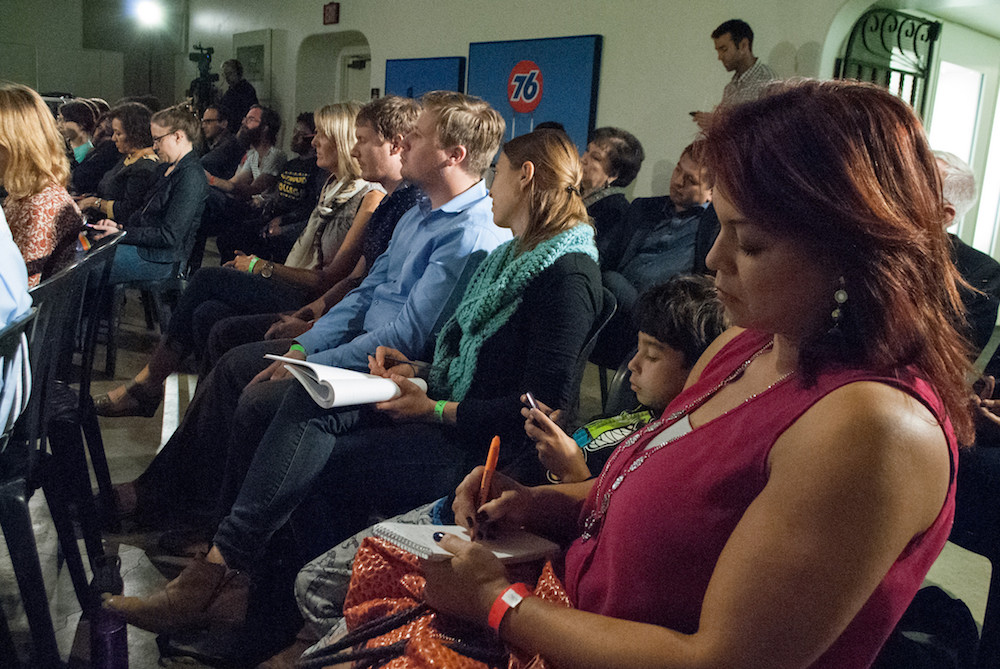 An engaged crowd at the Riverside Art Museum 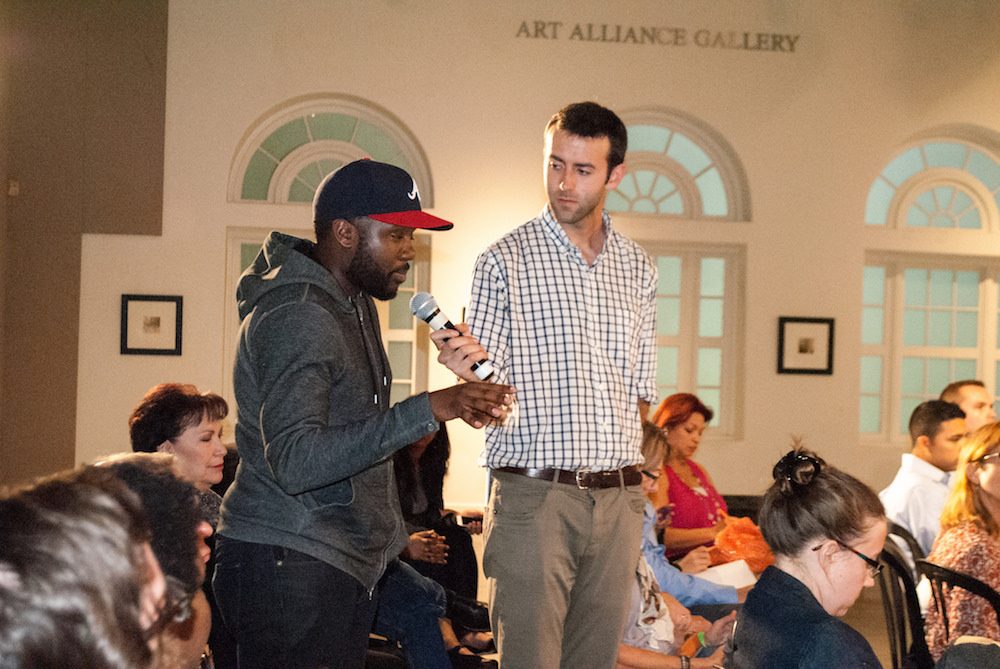 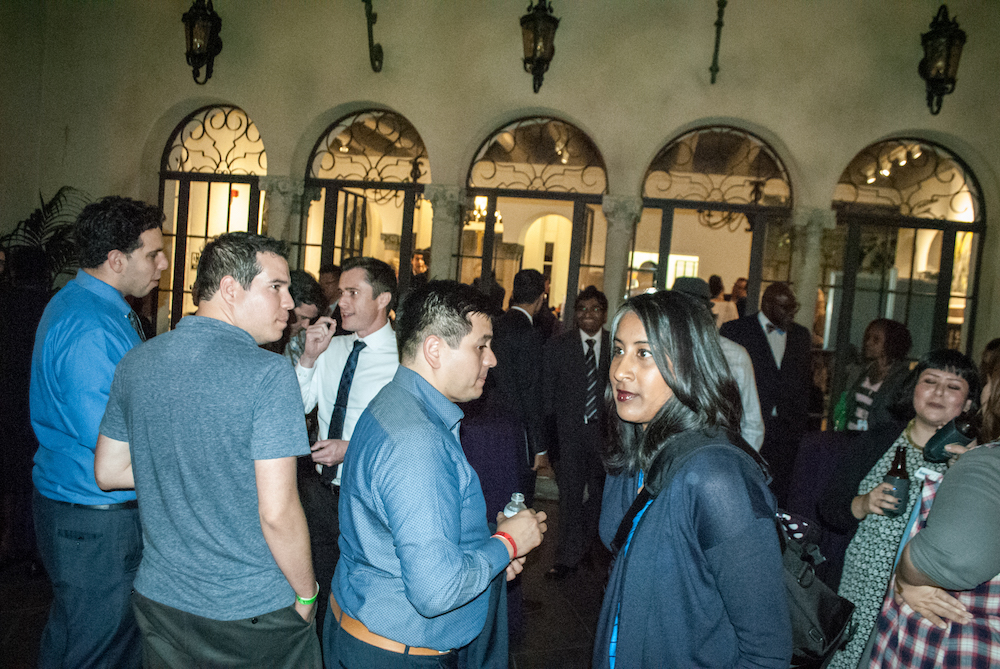 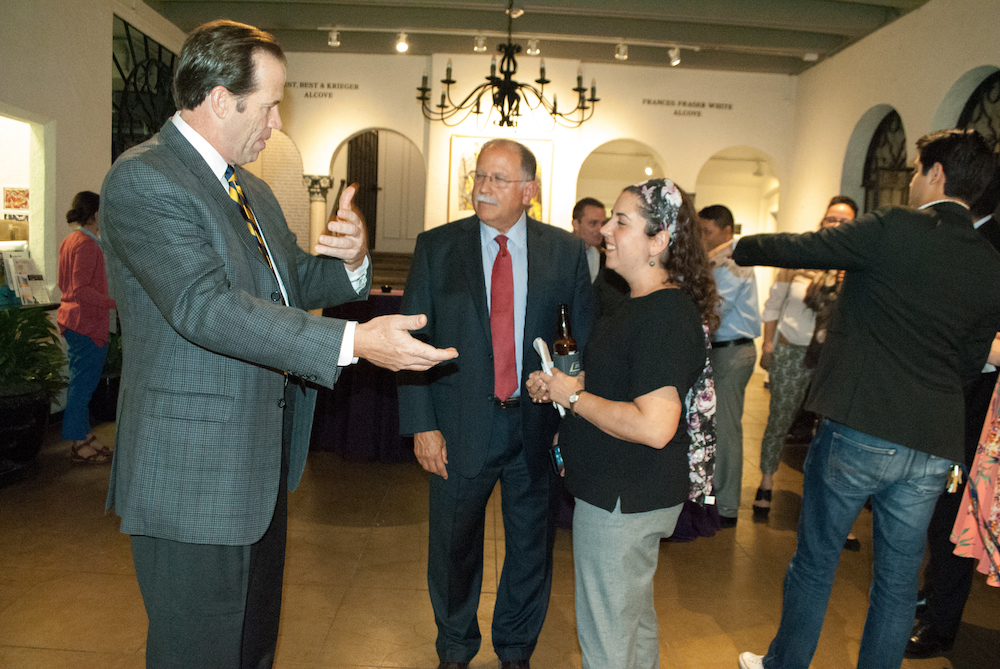 Jennifer Medina talks with guests at the reception