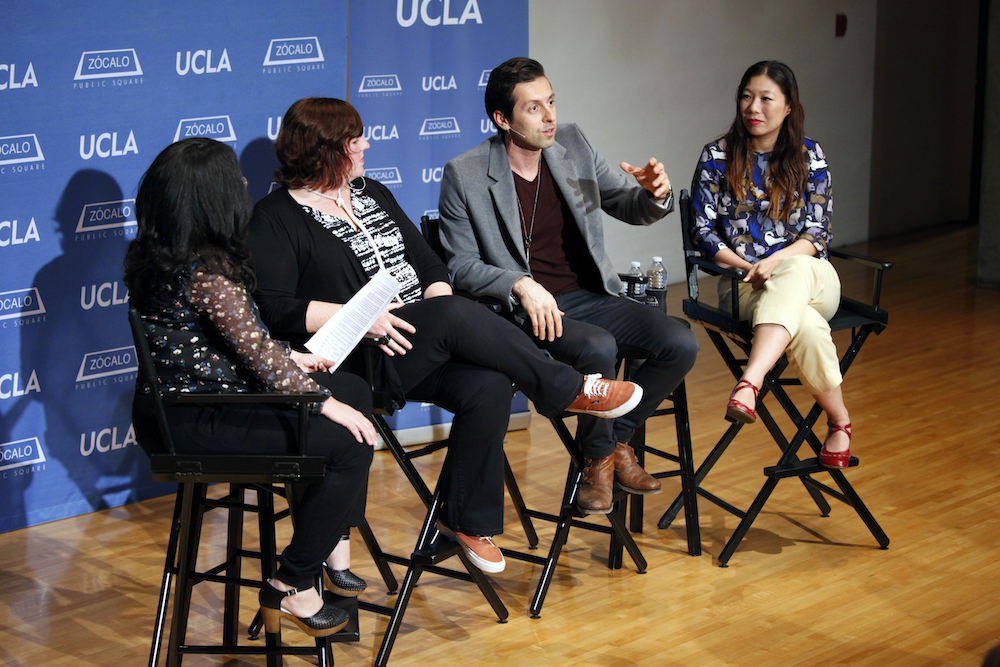 When New York Times Magazine contributing writer Carina Chocano was initially approached to moderate a Zócalo/UCLA event on political correctness and humor, she was intimidated by what she thought was the title: “Has Political Correctness Killed Humor?” On learning that the title was, in fact, “Has Political Correctness Really Killed Humor?”, she felt great relief. “I found it interesting that one little word would make such a big difference, and it made me think about context,” she explained. Turning to the panelists—two UCLA alumni who are also comedians and a scholar of humor—she asked how the context of a performance affects what political correctness means to them as performers.

“It is vastly different performing in different kinds of spaces,” said Beck Krefting, a Skidmore College scholar, author of All Joking Aside: American Humor and Its Discontents, and a former comedian herself. Many spaces are welcome to different voices, “but comedy clubs are not one of those spaces.”

Max Amini, a stand-up comedian who performs internationally, added, “Every setting has its own guidelines.” In Dubai, he has to write out his entire set and is prohibited from, among other things, using bad words, discussing politics, and talking about sex. “In other words, good luck performing.” He told the full house at MOCA Grand Avenue that his solution is to “do jokes about tomato juice.” But with more seriousness, he added that such restrictions also force you to become more creative.

When Kristina Wong graduated from UCLA, she thought she was going to be a performance artist. “I thought I would build a career jumping on a mattress and throwing feathers all over myself, moaning to a metronome,” she said. Even as she started getting introduced as a comedian, she was still intimidated by the maleness and drunkenness of stand-up comedy spaces. In performance art spaces, “if I fail, it’s the audience’s fault.” She called being a performance artist “a buffer” if audiences don’t find her work funny.

Chocano pointed to the quotation that opens Krefting’s book, by the Indian-American comedian Hari Kondabolu: “There’s a lot of things that people find funny that are really just bullying. When people get bullied, there are people that laugh.” Chocano added, “The comedy club culture is this bullying culture.”

Wong asked if the panel could “unpack this term—politically correct.” Today, she hears it “used resentfully by white male comics who don’t get to pick on people anymore. … It means people can pick on people who can speak back or have a right to self-determine their identity.”

Amini said that what’s politically correct depends, again, on context. “There’s countries where it’s okay to make fun of each other or pick on somebody, but not to talk about a specific prime minister or their leaders,” he said. For him, the question of political correctness or bullying comes down to the fact that his “goal as a comedian is to make people happy,” he said. He does a lot of crowd work, which includes picking on people. But “if I pick on someone, my joke in no shape or form is going to hurt her feelings,” he said. “I’m not going to ridicule her.”

Why, asked Chocano, are some comics like Jerry Seinfeld saying they won’t perform on college campuses? “What are they afraid of encountering?”

The panelists couldn’t come to an agreement on this. Krefting said that she’s brought comics to her campus who are socially just, and they’ve gotten heckled for being too far to the left.

Amini said that he once played UCLA and got no laughs because “the college crowd is difficult because they’re so inexperienced yet smart.”

“There’s a lot of things that people find funny that are really just bullying. When people get bullied, there are people that laugh.”

And Wong said that she has a love-hate relationship with performing on campus but ultimately finds that young people make for an aware audience, and that she appreciates their desire “to have deep conversations that aren’t in comedy clubs. So I’ll take the gigs that these rich comedians don’t want to take.”

Chocano pointed to recent comments from the comedian Patton Oswalt, who thinks anyone should be able to say whatever they want in order to free the rest of us to identify bigotry.

“Just because we’ve established that the n-word is a bad word doesn’t mean people haven’t figured out how to say the n-word without saying the n-word,” said Wong. At the same time, we need to realize that “not everybody has the same platform,” and some people have much bigger platforms and more visibility than others.

Amini, who is of Persian descent, said that he used to talk about his race, but “I don’t do it anymore because I feel that I am not necessarily my race. I feel I’m a person, and I’m trying to talk about my views.”

Wong said, “I tried that.” She failed. Gesturing to her face, she said, “Audiences can’t get over this. They need me to address this.” Plus, “there are a lot of people in my demographic who are not heard, and here is my moment to speak to them.”

Stock identities have always been a part of American humor, said Chocano. How, she asked the panelists, do you engage your identity to subvert those stereotypes?

Krefting pointed to the black comedian Issa Rae, creator and star of the web series Awkward Black Girl and the HBO series Insecure, as an example of someone who is “exploding the stock character.” Rae is “very specific about her agenda, which is that she wants to create complex and varied representations of African-Americans” that she doesn’t see in the popular culture.

In the audience question-and-answer session, the panelists were asked to address whether comedians can ever be excused because they’re only kidding, or because they didn’t intend to hurt a particular group.

Comedians need to learn their lessons, said Amini. “If you want to learn how to ride a bike, if you don’t fall a couple times, you’re not going to learn,” he said. And if you make jokes that are racist or sexist, it will catch up with you. “That’s how Michael Richard lost his career,” he said. Even “one of the most loved actors on one of the best sitcoms in America” wasn’t immune.

Wong said that shaming can be powerful. “I know it’s wrong to shame,” she said. “But that’s the only way I feel we’ve gotten this far.”

Krefting said that comedians need to be held to the same standards of political correctness as the rest of us. If a joke hurts someone unintentionally, then it’s on the comedian to set the joke up better.

Another audience member asked if election humor can build bridges between communities, pointing to a Tom Hanks Saturday Night Live skit that he felt was educational in terms of building solidarity between black and white working-class Americans.

Comedy, said Wong, “is where I’m looking for my hard-hitting commentary on what is really happening.” It’s an idea that harked back to a quotation she saw on Instagram and repeated earlier in the evening: “It used to be that we listened to politicians and laughed at comedians. Now we laugh at politicians and listen to comedians.” 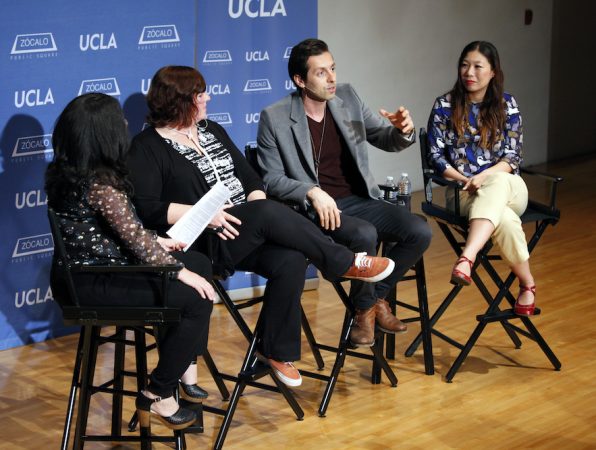 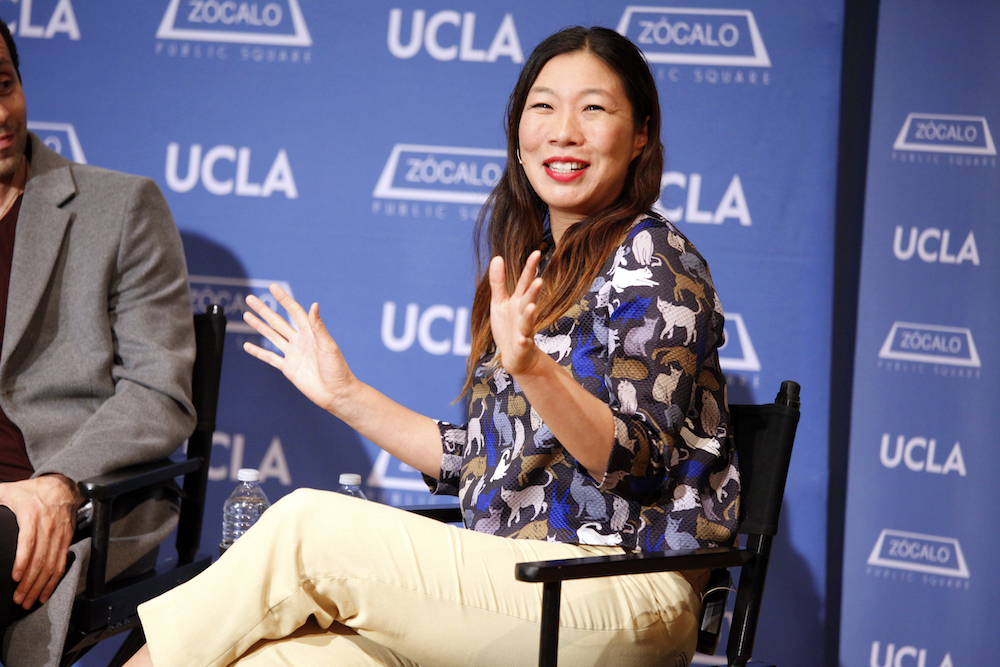 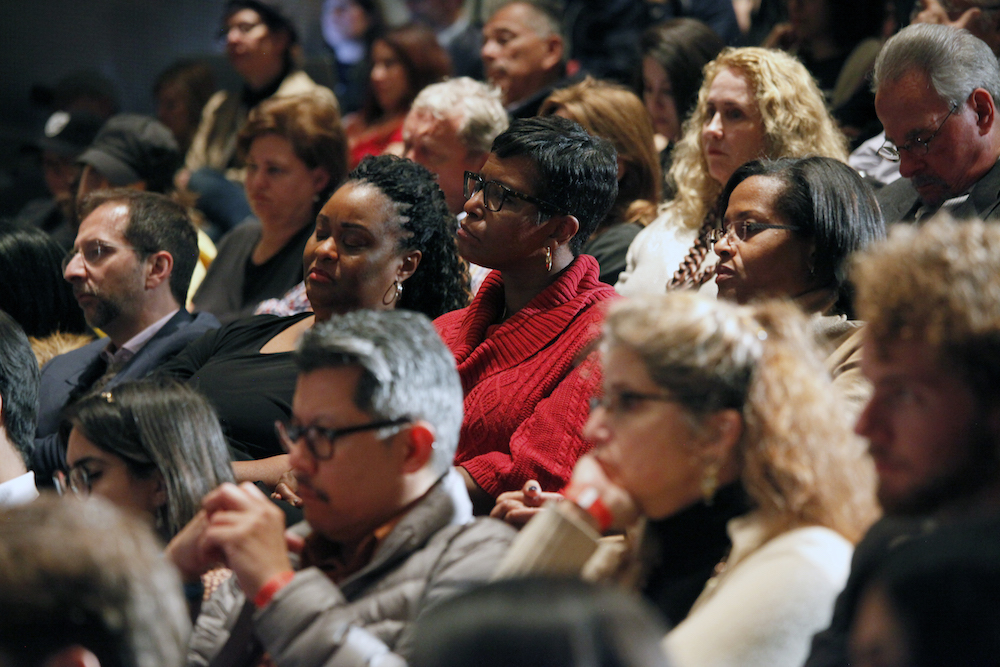 A full crowd at the Museum of Contemporary Art 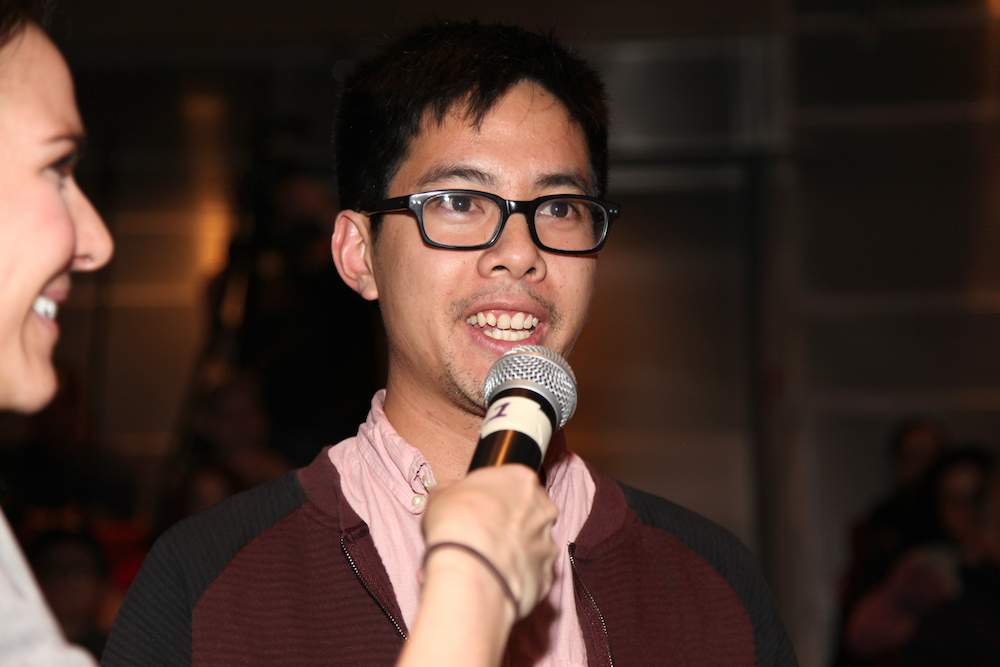 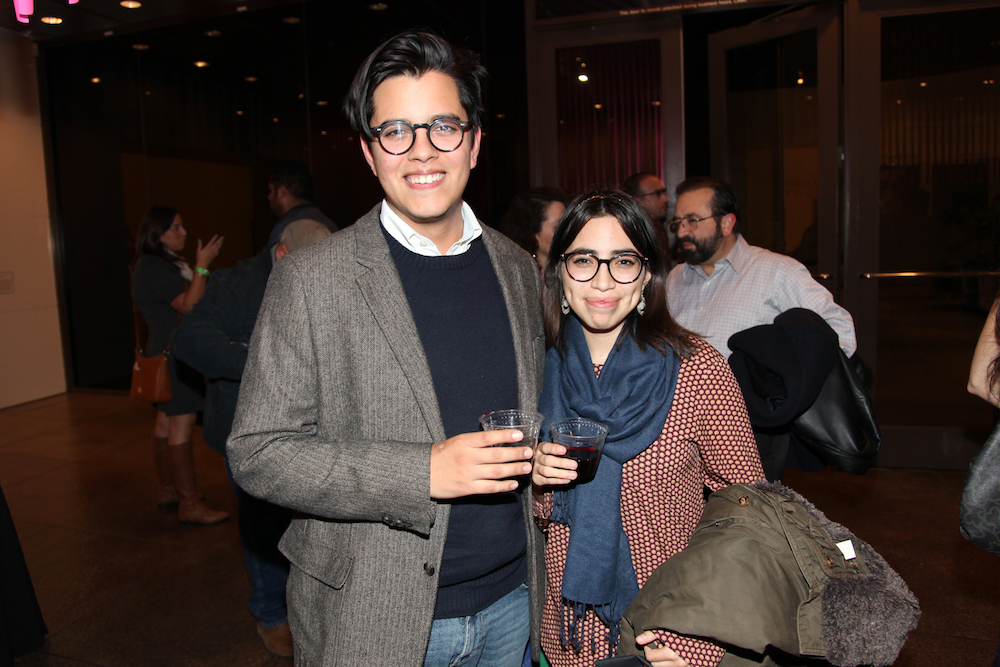 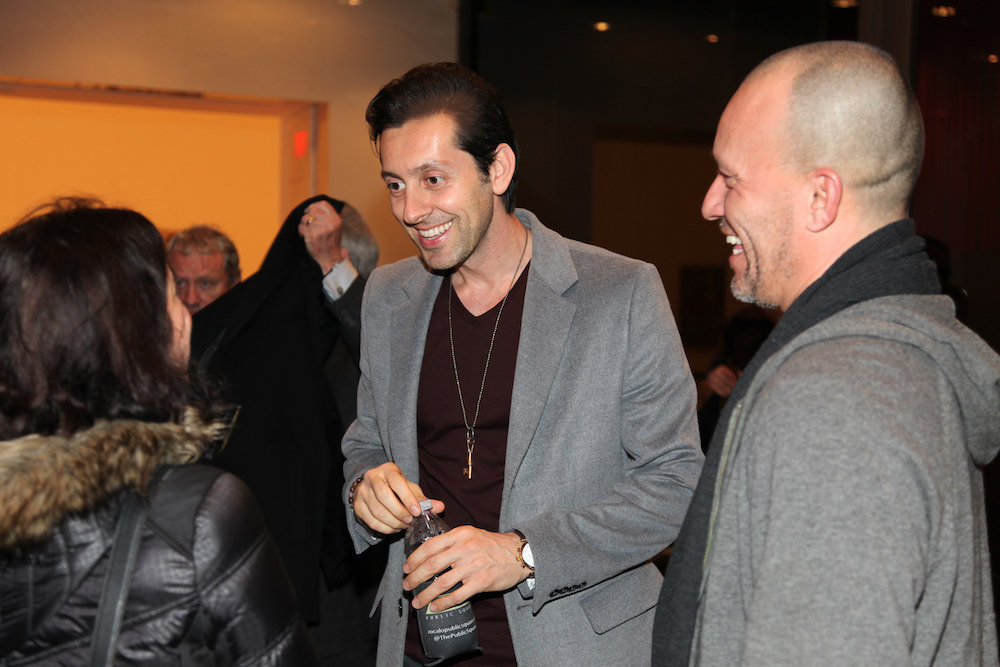 Stand-up comedian Max Amini speaks with guests at the reception