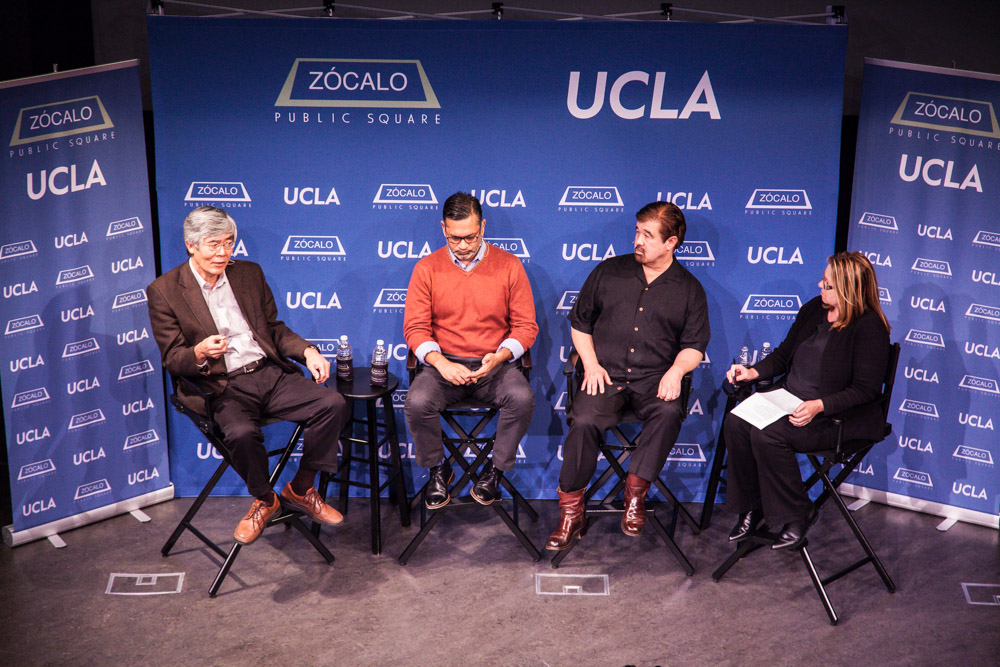 In December 1941, the attack on Pearl Harbor was the “trigger moment” that eventually led the U.S. government to herd tens of thousands of Japanese Americans into internment camps. If some explosive incident were to occur during Donald Trump’s presidency, could it provoke a similar mass round-up of Muslims, immigrants, or some other ethnic or religious group?

On Wednesday night, a standing-room-only crowd gathered to mull that possibility and other, sometimes dire scenarios, past and present, at the National Center for the Preservation of Democracy in Little Tokyo in Los Angeles. The frame topic for the Zócalo/UCLA event, presented in partnership with the Japanese American National Museum, was “What Does the Japanese American Experience Tell Us About the Proposed Muslim Registry?”

And although the panel discussion touched on the many ways in which America’s social and political landscape in 2017 is vastly more diverse and open than it was 75 years ago, the three panelists also noted that the government’s powers of surveillance also have grown exponentially in the post-Sept. 11 world, in ways that should set off civil liberties alarms. Today, multiple government agencies collaborate, and sometimes compete, to vacuum up as much information as possible.

“I would bet dimes to donuts that there are already plenty of ‘registries’ looking at people coming in, looking at people from Middle Eastern countries,” said Lane Ryo Hirabayashi, a sociocultural anthropologist in UCLA’s Department of Asian American Studies, where he is also the inaugural chair in Japanese American Incarceration, Redress, and Community.

Just as troubling, Hirabayashi suggested, is that much of this name-compiling isn’t being revealed to the public. “I think the citizenry can’t have a debate about what’s going on because we’re not being told what’s going on,” he said.

Yet a national debate has been in full force for months, intensified after then-candidate Trump revealed his plans to impose a freeze on Muslim immigrants to the United States and by a subsequent proposal to launch a registry of Muslim American citizens.

Nowhere has that debate resonated more deeply than in coastal California. The Golden State was home to many of the Japanese Americans who were deported, by President Franklin D. Roosevelt’s order, to concentration camps during World War II, the panelists noted. Today it is a liberal bastion, with several cities whose mayors have vowed to resist a possible Trump administration crackdown on undocumented workers or other sweeping actions targeting particular ethnic or religious groups.

“On the one hand you think you’re in a bubble, but on the other hand you’re at the epicenter,” said Hiroshi Motomura, a UCLA School of Law scholar of immigration and citizenship law.

Indeed, Motomura pointed out, California has been at the epicenter of previous, heated debates surrounding immigration and citizenship rights, including the violent reprisals against migrant Chinese workers in the 1800s and the Prop 187 movement in the early 1990s.

Discussion moderator Ann Burroughs, the museum’s interim president and CEO, noted that it was “no accident” that the evening’s program was taking place in Little Tokyo, a spot from where some Japanese Americans had been rounded up and turned into exiles and non-citizens in their own country.

“We’re here on the site of the museum which stands as a sentinel,” she said, citing “war hysteria, prejudice and poor political leadership” as the main factors that led to an episode that most Americans later came to view as a national disgrace, and for which President Ronald Reagan eventually formally apologized.

“We’re facing the specter of that terrible, tragic episode in American history being repeated,” Burroughs said.

Ironically, the panelists said, one common feature both of World War II registries and of registries (known and suspected) that have been compiled since the Sept. 11 attacks is that none has been demonstrably effective in identifying criminal suspects or potential criminal actors, leading to their arrest or deportation.

“These programs have no meaning in terms of actual national security,” said panelist Ali Noorani, executive director of the National Immigration Forum and author of the forthcoming book There Goes the Neighborhood: How Communities Overcome Prejudice and Meet the Challenge of American Immigration.

But despite the inefficiency and inefficacy of such registries, a violent terrorist incident still could be used by President Trump to justify extreme measures.

“He [Trump] is very likely to use that moment and that tragedy to polarize the country,” and many Americans might well support such a move, Noorani said. “I think the majority of Americans are supportive of immigrants and immigration, but they’re also scared. And we have to acknowledge that fear.”

So what is to be done? Several audience members posed questions asking whether or how individuals or organized groups could check an extremist effort to scapegoat targeted Americans. Patricia Takayama of the San Fernando Valley Japanese American Citizens League (JACL) asked the panel how citizens might influence what sort of information government agencies are allowed to stockpile.

Motomura replied that although there’s sometimes a firewall between agencies, the public’s best ally in this effort is to enforce greater transparency, which puts pressure on the information collectors and destroys the “myths” that those agencies may be disseminating.

Noorani said that forming common cause around issues such as religious freedom can help build alliances among groups as diverse as Southern Baptist mega-churches and the American Civil Liberties Union, safeguarding the rights of more Americans.

He said that if “we can move the needle a bit on these cultural values, there’s a little more space for a policy and political debate” in the event of a trigger moment.

“I’m not sure we’ve done that,” Noorani said. 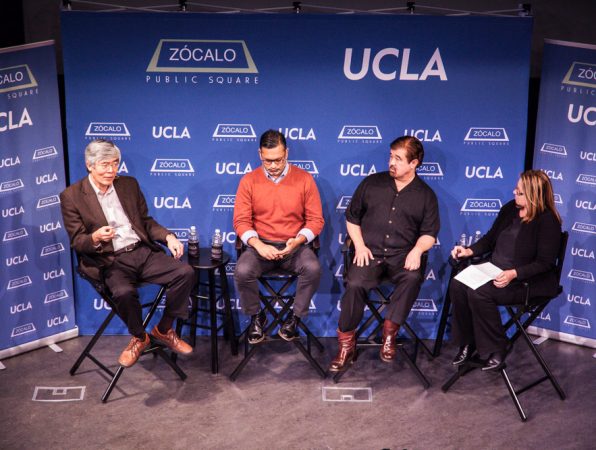 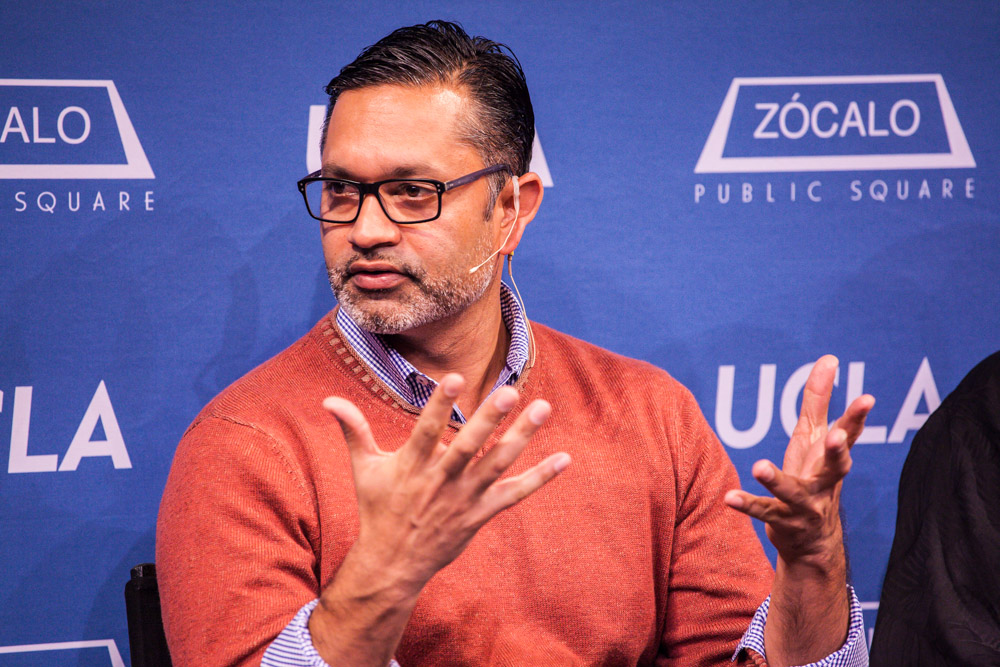 Ali Noorani, executive director of the National Immigration Forum and author of There Goes the Neighborhood 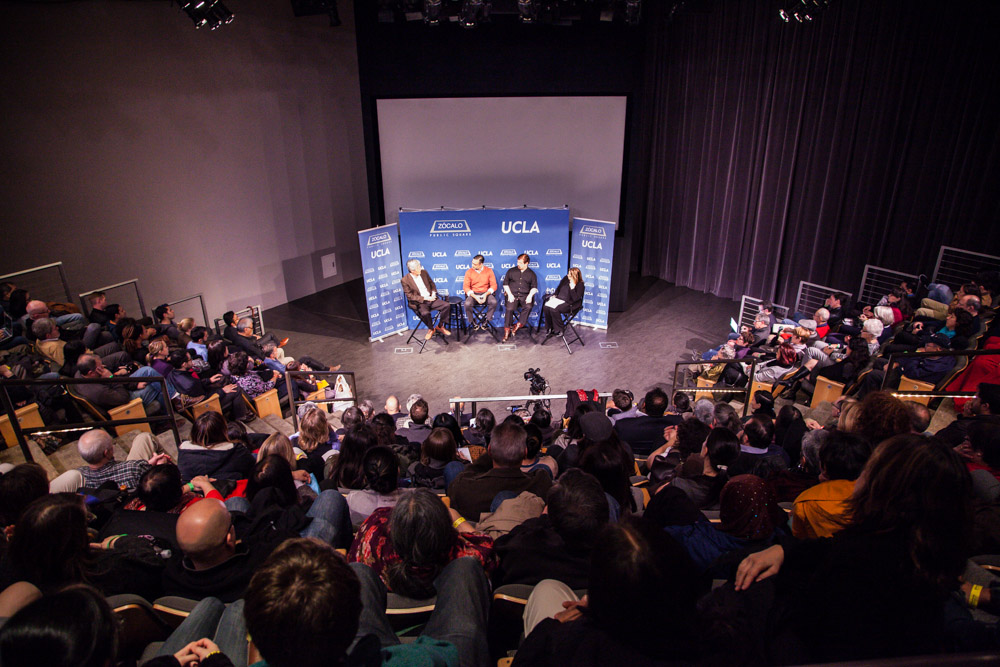 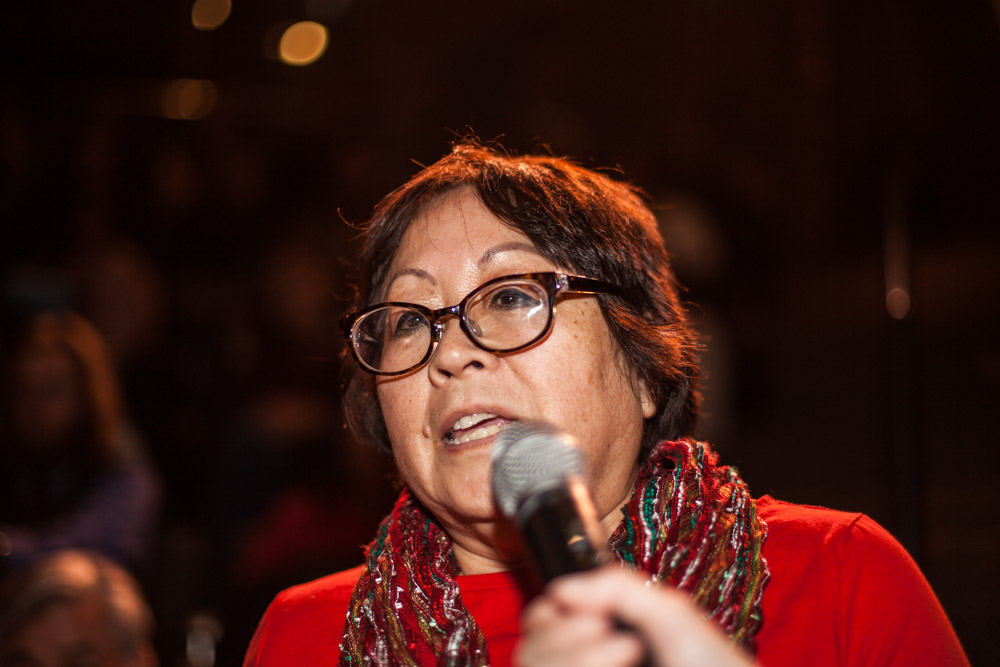 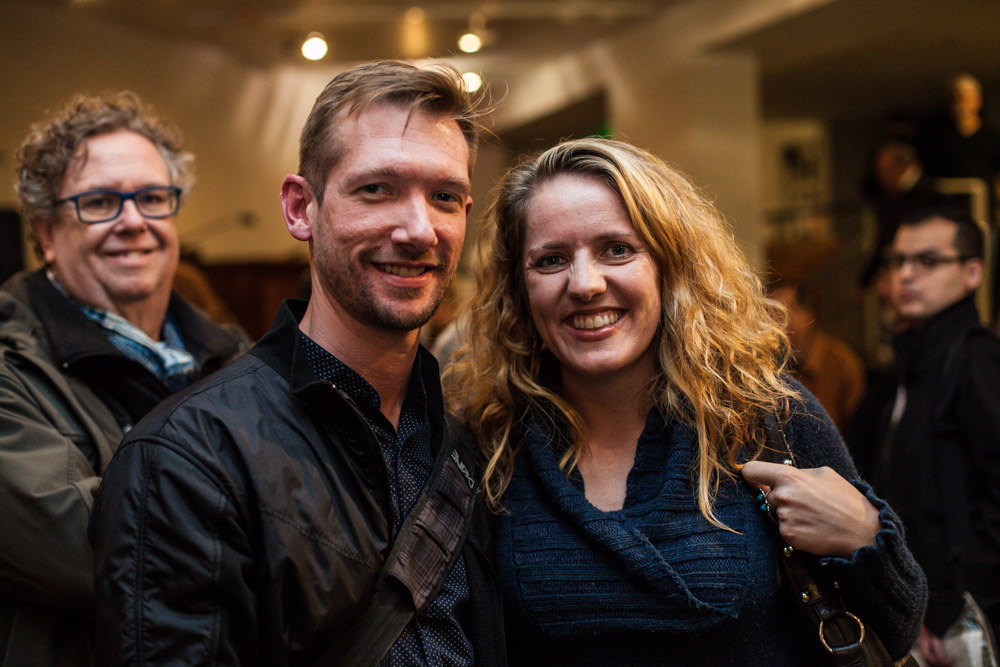 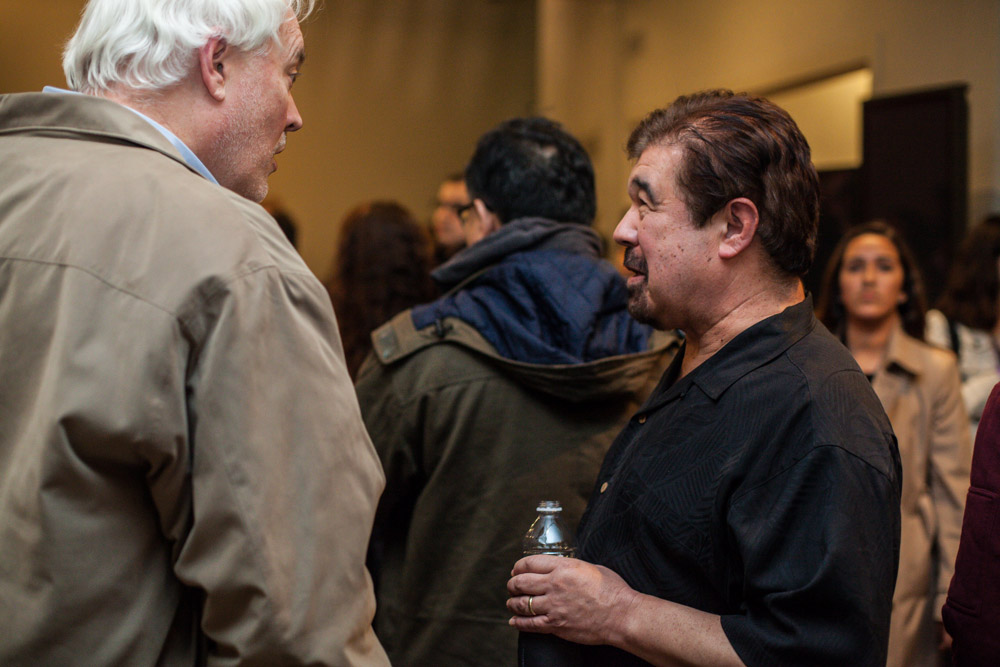