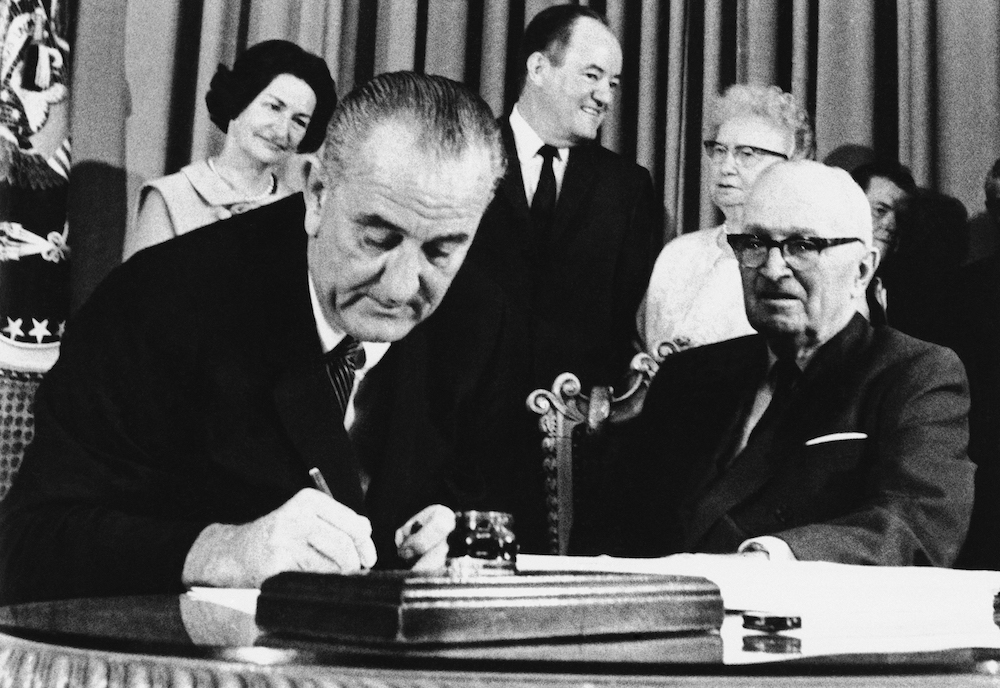 Before Congress passed Medicare and Medicaid in 1965 millions of elderly Americans lacked health insurance. They could not afford to go to the hospital, nor could they cover the cost of a physician. Medical breakthroughs ranging from antibiotics to new surgical procedures kept increasing the cost of health care, but the elderly were left out in the cold, and were unable to buy the insurance that was being given to workers in manufacturing jobs.

For them, just going to the hospital could result in bills that would take a decade to pay off. The old then squeaked by on getting special rates from doctors and hospitals who knew they had limited resources. Many relied upon their families to help them pay. There was no safety net whatsoever: One 1963 survey found that nine out of 10 couples, and eight out of 10 elderly individuals, paid for their own care without help from government or private sources.

Since 1946 through 1952, when Harry Truman was president, liberals had argued that the United States lagged behind other countries by failing to guarantee health care to all of its citizens. But in the ensuing decades, health care reform had been a losing issue for Democrats. Taking on the health care issue was a top liberal issue, but it wasn’t easy. The U.S. had a well-developed system of private health care, which meant that when liberals pushed for their policy, those with a vested interest in the existing system—including doctors—would have reason to say no. The process of crafting Medicare and Medicaid, building a federal program on top of a well established private system, left scars on the legislation itself so that these unresolved arguments from half a century ago still haunt American health care today.

In 1949, the American Medical Association and congressional conservatives had defeated President Truman’s plan to provide national health insurance for all Americans by branding the proposal as “socialized medicine” and warning that patients would lose their relationship to their doctors. During the mid-1950s, liberals narrowed their focus by proposing a federal health care program for the elderly, paying for the cost of hospital insurance through Social Security taxes. President Kennedy picked up on the idea and pushed for “Medicare” in 1962 and 1963.

But congressional conservatives and the AMA blocked the proposal. California Governor Ronald Reagan produced a record that the wives of doctors in the AMA played during coffee klatches in which he warned: “One of the traditional methods of imposing statism or socialism on a people has been by way of medicine.” The AMA distributed posters that doctors hung in their offices, warning patients that should Congress pass Medicare, bureaucrats would make their next medical decisions. “The doctors in Florida agreed that the first three minutes of every consultation with every patient,” said Florida Senator Claude Pepper, “would be devoted to attacking socialized medicine. …”

But the politics changed in the spring of 1965. Lyndon Johnson won a landslide reelection against Arizona Senator Barry Goldwater, a right-wing Republican who spent much of his campaign blasting Medicare proposals. With Goldwater’s defeat, many Republicans believed that they would have to move to the center and work with the administration to survive. The election produced huge Democratic majorities in the House and Senate, with many of the new members having entered into Congress determined to pass the languishing health care proposal.

Johnson, sensing that he might be victorious, told one of his top advisors, Wilbur Cohen, to find a bill that would please Wilbur Mills, the conservative chairman of the House Ways and Means Committee. “You get him something, though … if labor will buy, that he can call a Mills bill, that’s what it amounts to …” Johnson understood that his time was limited, and urged everyone to move as fast as possible. “For God sakes, don’t let dead cats stand on your porch,” he said about the Medicare bill—explaining that if a bill sat around to long, like a carcass, it would begin to “stink.”

Medicare and Medicaid stuck to the American political tradition of distinguishing between “deserving” and “undeserving” recipients of government help.

Republicans, eager to distinguish themselves from Goldwater, proposed their own alternatives to Medicare. One proposal provided insurance to cover the cost of physicians, paid for through general tax revenue and a contribution from participants. Another program would provide health care to the poor, those who were “medically indigent” and couldn’t afford care on their own.

When the House Ways and Means Committee met to discuss the three plans in early March, administration officials were worried that their plan would not be able to garner enough support to pass the committee. But Chairman Mills, who decided that it was no longer possible to hold back the tide on the legislation, given that so many of the new members elected in 1964 had promised to deliver on Medicare, shocked everyone in a closed committee hearing. He turned to Wilbur Cohen and said, “Maybe it would be a good idea if we put all three of these bills together. You go back and work this out overnight and see what there is to this.”

In that moment Mills transformed himself from the top opponent to the main architect of the new program. The rest was history. The bill moved through the Ways and Means Committee, the House, and finally the Senate. Johnson was happy to give Mills all the credit in exchange for a bill, though the president was taken aback at just how expansive the revised program would be.

Johnson traveled to Independence, Missouri to sign the Social Security Amendments of 1965 into law on July 30, 1965 with Harry Truman standing by his side. The final legislation, officially called the Social Security Amendments of 1965, contained three parts. The first, Part A, provided hospital insurance to elderly Americans covered by Social Security paid for through the payroll tax. Part B was a voluntary program that covered doctor’s bills, paid for through a combination of general tax revenue and premium contributions from recipients. Finally, Part C, which we now call Medicaid, provided health care coverage for poor Americans who were “medically indigent.” The final part was much more like a welfare program, administered by the states and paid for through a combination of federal and state money.

Yet even at a moment when liberalism was strong, Medicare proponents still had to make a number of consequential compromises because of America’s resistance toward strong government. The most important was that Medicare and Medicaid provided this insurance within the existing health care system. As the sociologist Paul Starr has argued, the system layered the federal insurance on top of the existing system, thereby leaving many of the dysfunctional elements of American health care fully in place.

Medicare and Medicaid also stuck to the American political tradition of distinguishing between “deserving” and “undeserving” recipients of government help. This was a central feature of political discourse about government assistance since the start of the Republic, as the historian Michael Katz has written. In this case, the government provided benefits based on status rather than as a right.

The result was that even in a moment of victory, liberals legitimated a narrower vision of public policy than existed in other comparable systems in Europe. The fact that Medicare depended on a Social Security tax, which was sold as a way of showing this was an “earned benefit” likewise confirmed a limited vision of the obligations of government.

And then there was the problem of cost control. During the final weeks of negotiation over the bill, Ways and Means Chairman Wilbur Mills pushed back against efforts to include stronger regulatory mechanisms to control health care costs in the legislation. The final law allowed hospitals to determine what a “reasonable fee” would be, with a guarantee that the government would pay it. The result was skyrocketing costs over the next few decades. Although Congress did impose tighter cost controls during the 1980s, the overall strength of the federal government remained limited and health care providers came to rely on high charges.

All of these compromises, which made Medicare and Medicaid possible in 1965, would have long-lasting effects. By providing health insurance to the elderly the program made a huge difference. In 1963, one of every five Americans who lived below the poverty line never had been examined by a doctor, and poor people used medical facilities less than others. By 1970 that proportion had fallen to about 8 percent. Most elderly Americans had access to hospitals and doctors. Medicaid vastly expanded over the next few decades to include pregnant women, kids, and other categories of Americans who have limited access to care. By 2011, close to one-third of all Americans, not just the elderly, were covered by Medicare and Medicaid.

Hospital administrators, doctors and other people in the health care system now depended on these federal dollars. State governments counted on Medicaid dollars in their health care budgets. The programs became so ingrained in the national political consciousness that when conservatives rallied to oppose President Obama’s Affordable Care Act in 2009—which achieved some cost savings through cuts in Medicare—they held up signs saying “Get Your Government Hands Off My Medicare.” The signs were ironic and funny, but also the best evidence of success, namely that even the right wing accepted these plans as part of the status quo.